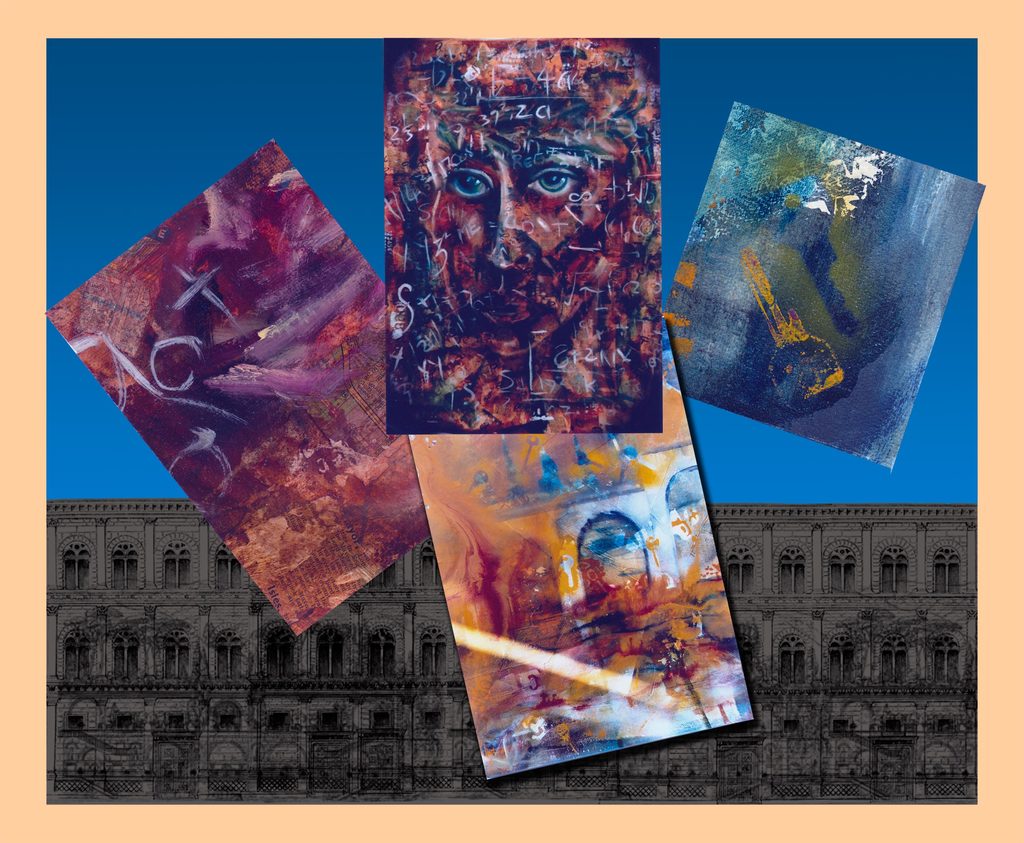 Cheryl Penn sent some massacred paintings with helps. Dense as I am I did not realize until I received this current offering that Cheryl's technique involves 1) Making the Painting 2) Photograph It (and possibly write the narrative story) 3) Cutting it up and sending out the pieces of the painting along with the photograph of the piece from which it came. Got that? I finally did. I know, I know, it's not rocket science but sometimes I can be a remarkably poor observer....Now as to the narratives...The top painting is all about Hypatia, daughter of Theon who longs for the quiet life of abstraction in the warrens of the Library at Alexandria but her mother makes her attend all the ritual sacrifices and ceremonies. Mom doesn't get her. Still her head, filled with theorems and jetsam, enables her to cross the bridge of imagination to be with Eudoxus, not a lover but a sage who has the answers.

The bottom painting may be an African myth about a bridge to the other world. Only the steadfast will make it, their hearts uncluttered with doubt.

Cheryl's art speaks on several levels and some of the tongues may be foreign so you have to learn the languages bit by bit. I can't claim to even speak Pigeon Penn but the contours of her vision, however furry, are coming into view.

Cheryl, I hope you don't mind, I thought the quartet might like to be an angel flying over Alexandria. Thank you. Then just today I got a package from Nancy Bell Scott and according to her note this was subtracted from a larger piece from an "earlier art era" of Nancy's. It was a good era. I hope I scanned this large enough for you to feel the density of the piece. Nancy likes deconstruction. Part of the pleasure she says is similar to the pleasure you get when you "demolish a wall in an old house." The crowbar was her friend. She also sent me this:

Sometimes Nancy gives me the impression that she is sitting on a goldmine of ephemera, some of which have been sitting patiently waiting for their singular recipient. That's why Nancy chose this for me. Thank you, Nancy.

Finally, Suus in Mokum sent me this snooble of a monk at mass. I took a couple of the textures and fed them to Dovima. Hope you don't mind, Suus. Thank you. She is an original, and always thought-provoking as well as beautiful. The expression on that guy's face is priceless, Suus!

Comment by Suus in Mokum on November 14, 2013 at 8:12am
Wonderful papercollage by Cheryl!

That is the epitome of simplicity.

Well, my take on it is: She starts with a dream, embroiders the theme and then when she's finished she revises her scheme to fit the new meme. Pretty simple, really....Cheryl, what say you?

Thanks for this nice blog, David. Yes, isn't Cheryl a tricky one . . . I tried her method but it works only for her!

More paper dolls!   Great to see it all and get your take on it.

Oh, yes, David, this is a nice collection of mail art!

'Love what you did with Suus' art and made high fashion...looking good.

And Nancy's are stunning.