Hope for the Aged

I thought this was a particularly good distillation of why I like mail art. (We still don't know why it doesn't like me but that's for another day).

From a Washington Post article on creativity and aging. 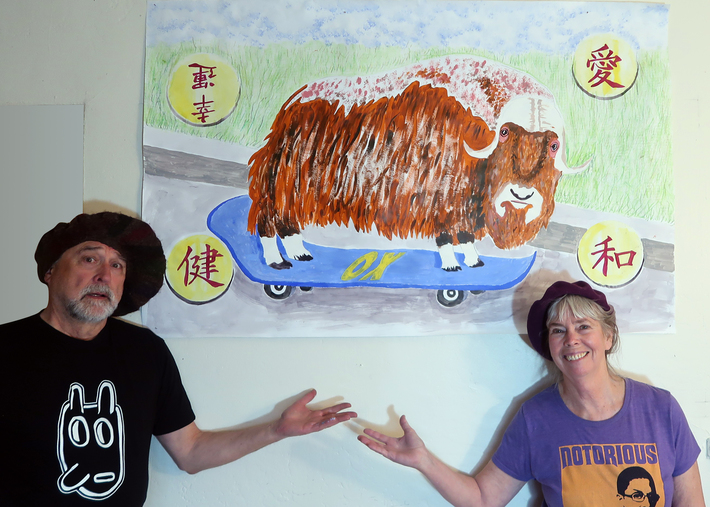 T-Shirt from the Jon Foster Collection

Saving the US Postal System

I may be violating a IUOMA policy here but I think it's important for people to realize that the forces of darkness are once again trying to privatize our Postal System, widely regarded as one of America's proudest achievements for a wide variety of reasons.

I'm not sure anyone has addressed this yet but it has occurred to me that we may all be wondering what the protocols should be.

Here's an informative article that addresses the issue. 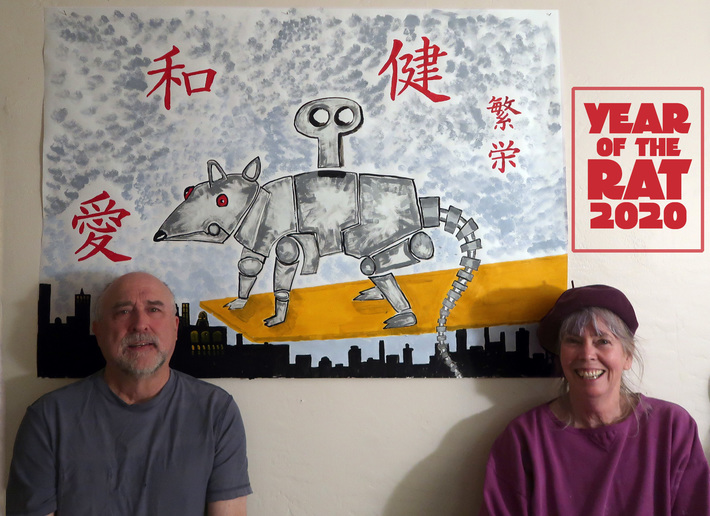 Here's the pig leaving the building.… 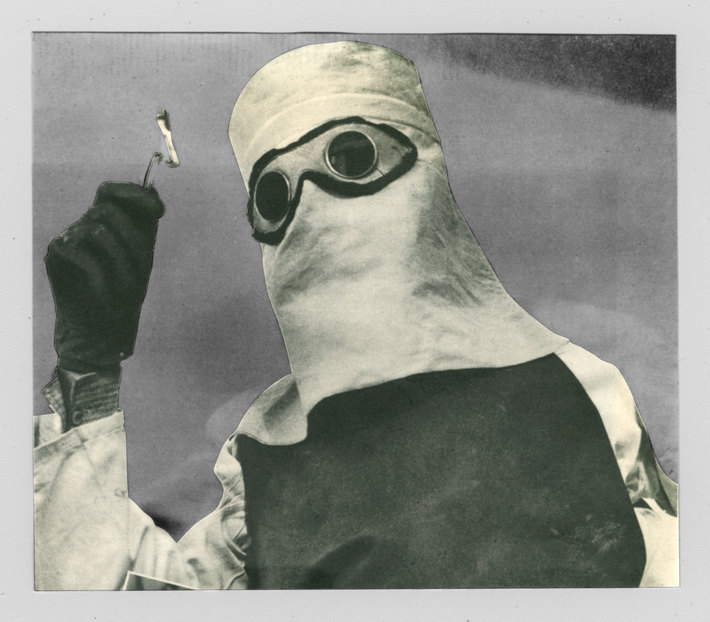 It's time again to put out the call to interested ephemeralists and makers of collage. I have more of these old magazines (Mostly women's magazines from the 40s, Ladies Home Journal, The House Beautiful, etc.) that I would like to give away. I also have clipped (what I deem) the usable parts of several of the magazines for those who want to cut to the… Note: As part of my plea agreement I am required by law to post these PSAs periodically. Let me know if you have any questions.

A Public Service Message From Dave

I know just how vexing an issue this can be and that's why I've decided to offer this handy info wheel to those confused by this crazy, mixed up, modern world of mail art. I hasten to add: this is only a prototype. We're looking for investors who might want to help us iron out a few of the kinks. Please go to our gofund me site elsewhere on this planet. Or just bask in the knowledge that there are answers out there to questions that seemed beyond the reach of science. Many…

YEAR O THE PIG PLUS MORE 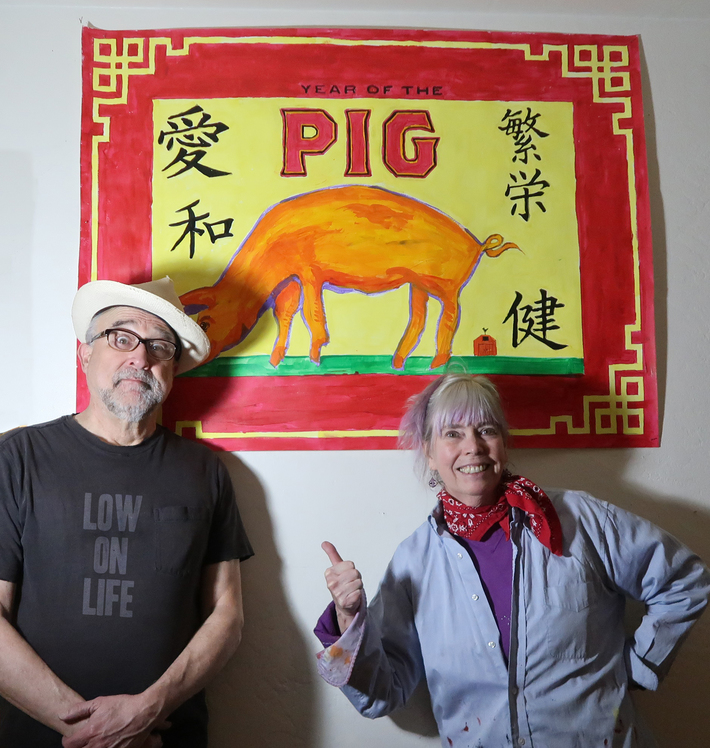 Happy Year o' the Pig and all that. But wait...there's more. I'm finishing off my gargantuan scanning project. And now I have all these old magazines that I'm wondering what to do with. I've considered selling them on Etsy but it seems like a fool's errand since… 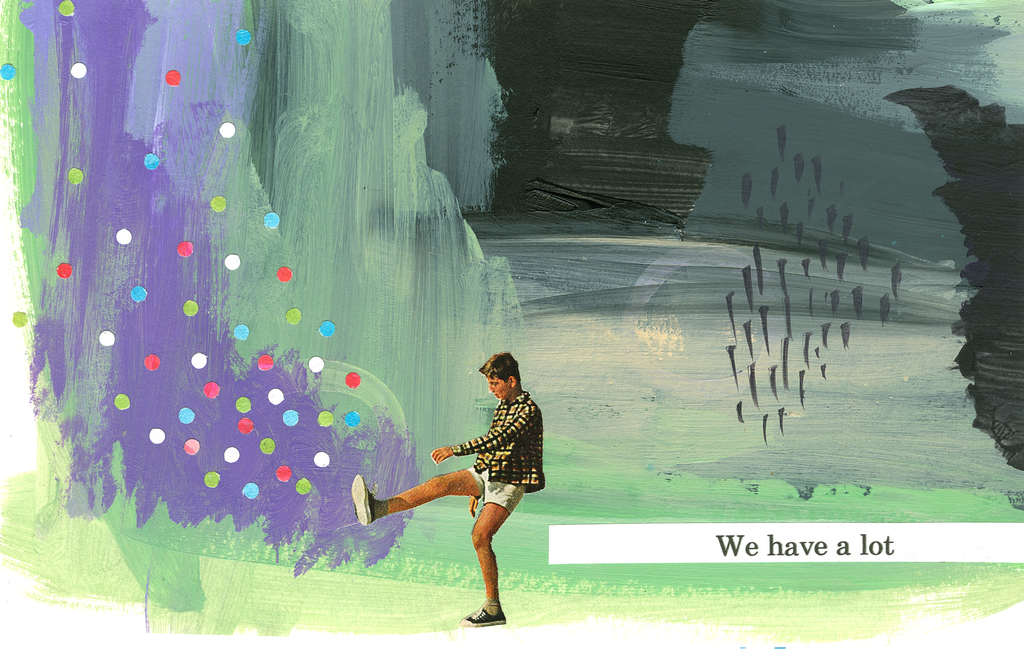 Brooke C. of Seattle sent my mom this fresh collage/painting. Alas, to complain about too much rain is not something we ever do in New Mexico. Would that we could. But your collage is still lovely, Brooke. 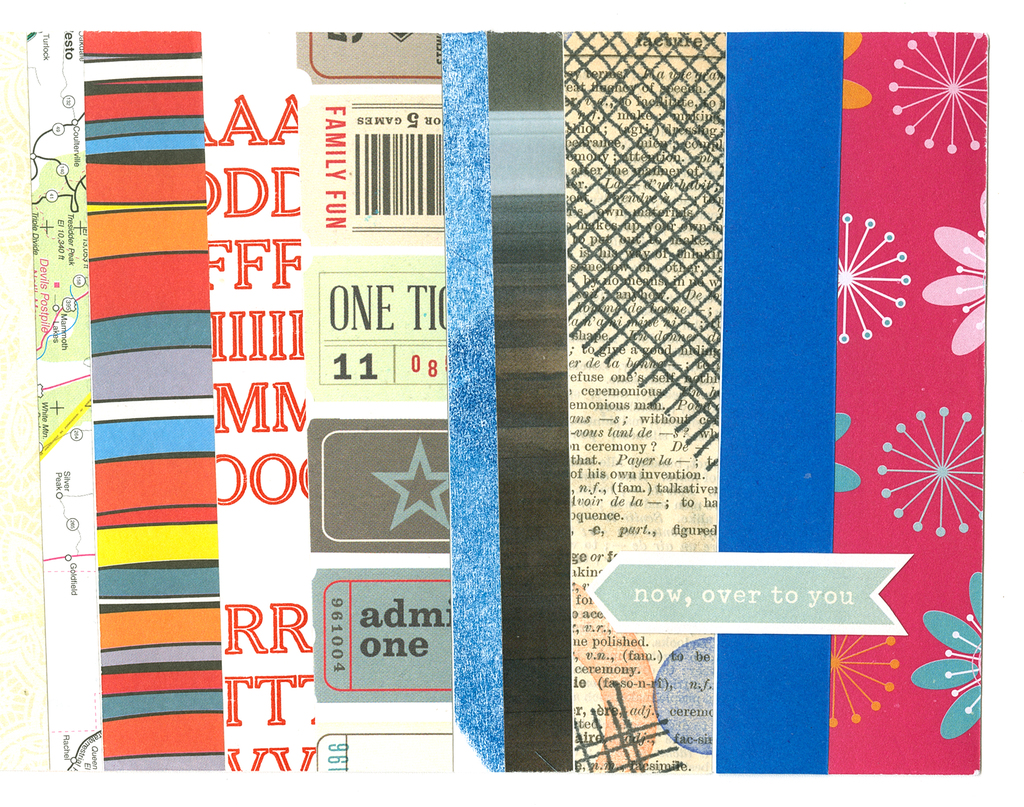 And she sent me this colorful… From outta the blue Nadia of Barcelona sent me this monster on wrapping paper, just the kind of spontaneous effort I like to see crossing the ocean in search of meaning. Thank you, Nadia. 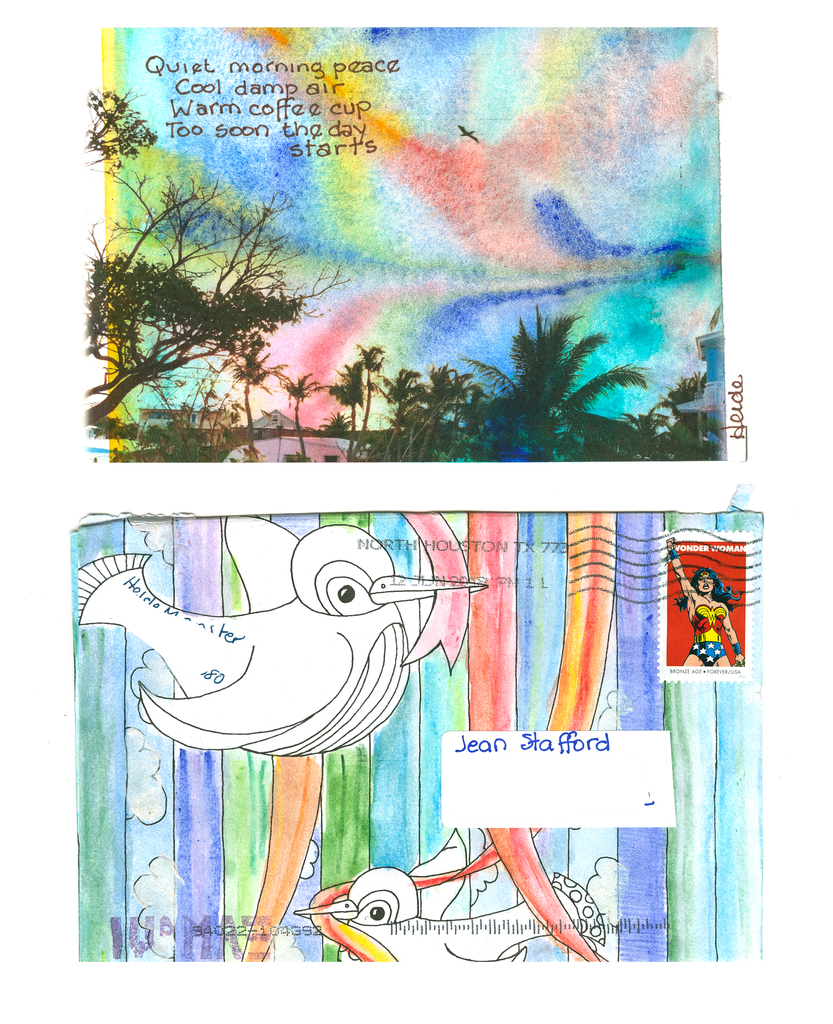 Then Heidi Monster sent my mom… As some of you know, I have been in California every other month for the past three months. (More on that later) That means I received lots of mail art which I haven't been able to get to for a while. This megablog, with an emphasis on brevity, is meant to address that and catch up with all the good stuff you've been sending.

First up, a sensuous collage from… Stripygoose sent me this Cool Cardboard Crowing Cock Collage (C.C.C.C.C.), which resembles a museum exhibit in this setting. A Cave Carving from the Age of Cardboard. (C.C.A.C.) Thank you, SG. Brooke Cooks sent me this valentine. So sweet… 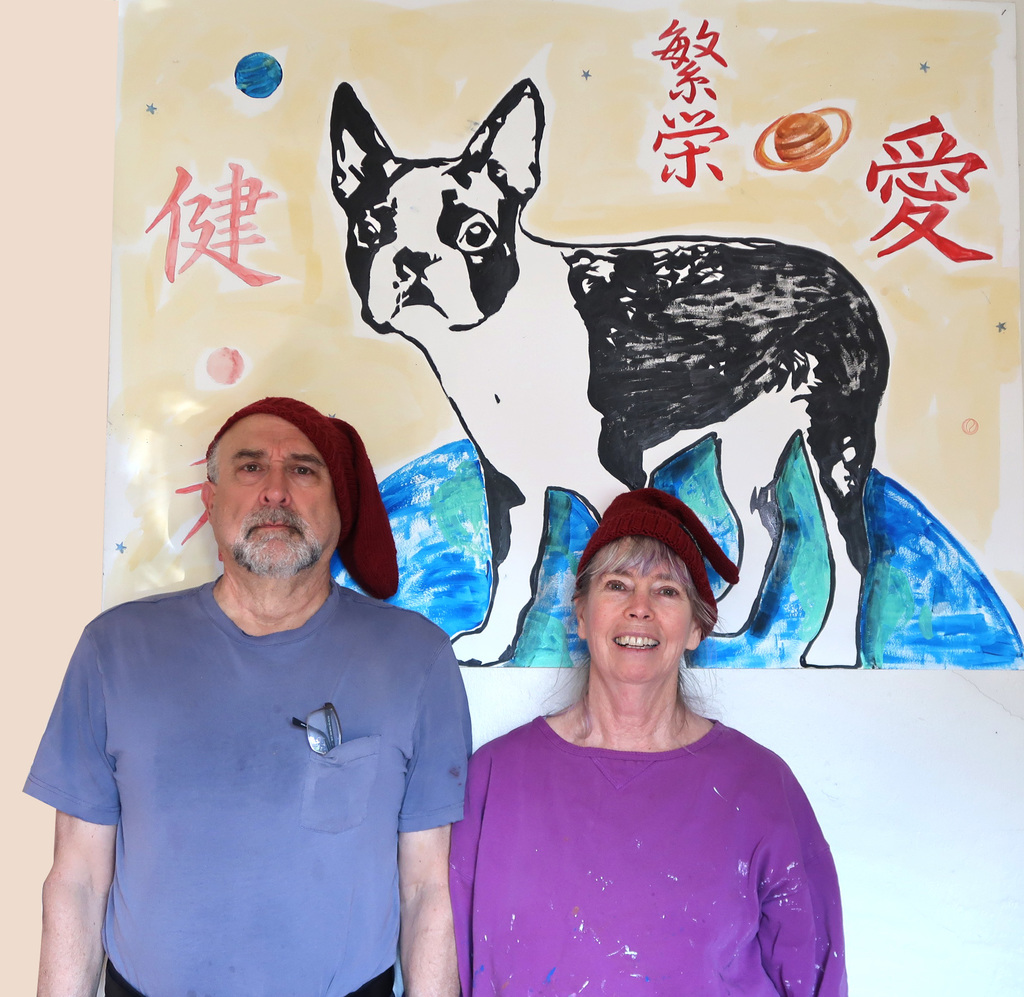 Kitchen Litho from Carina in far off Petsmo. Wunderbar.  (Can you really do lithography with just things found around the kitchen? If so, I want to try it). And the envelope, please. Out of the blue Jose Nogueira sent me this wonderful package of stuff. This was the envelope. Inside: 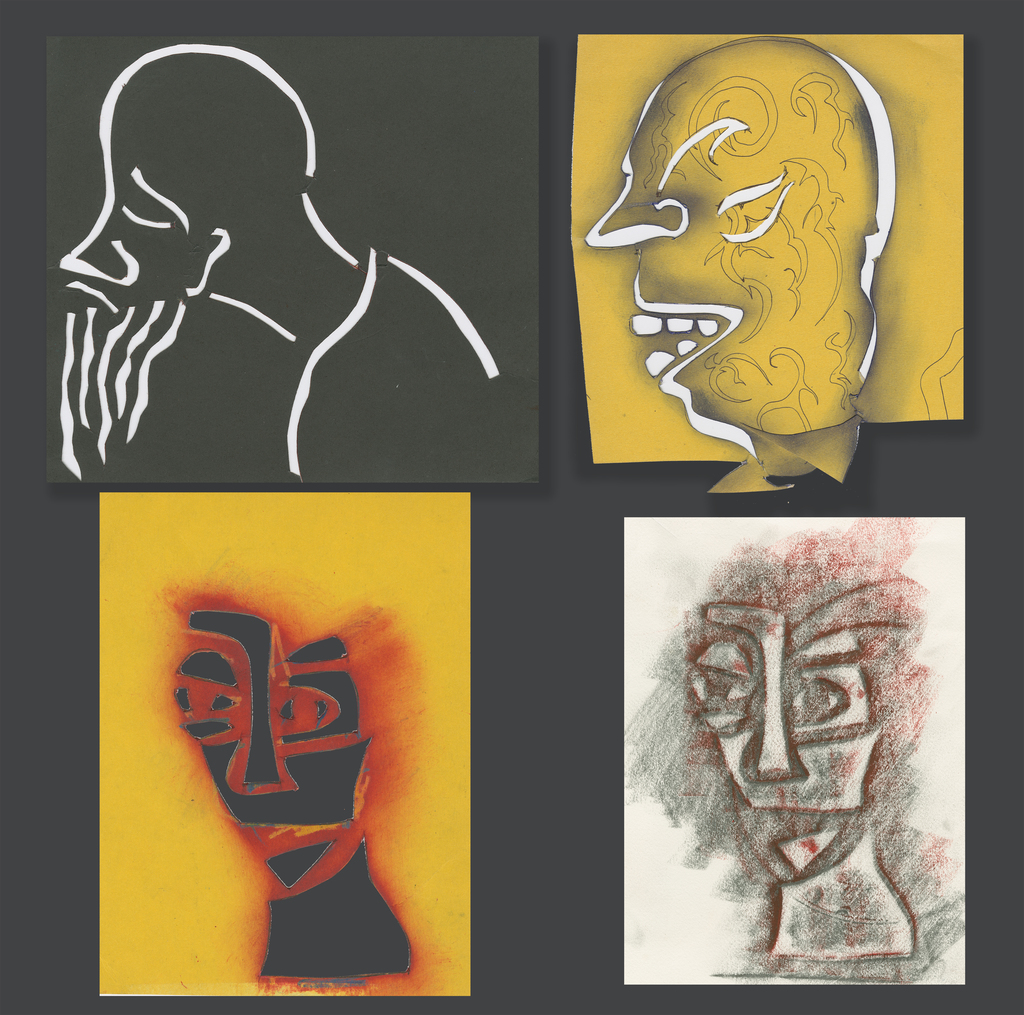 Three stencils which I presume are part of a silk screen operation but cool as art in their own right. And...they happen to dovetail with… 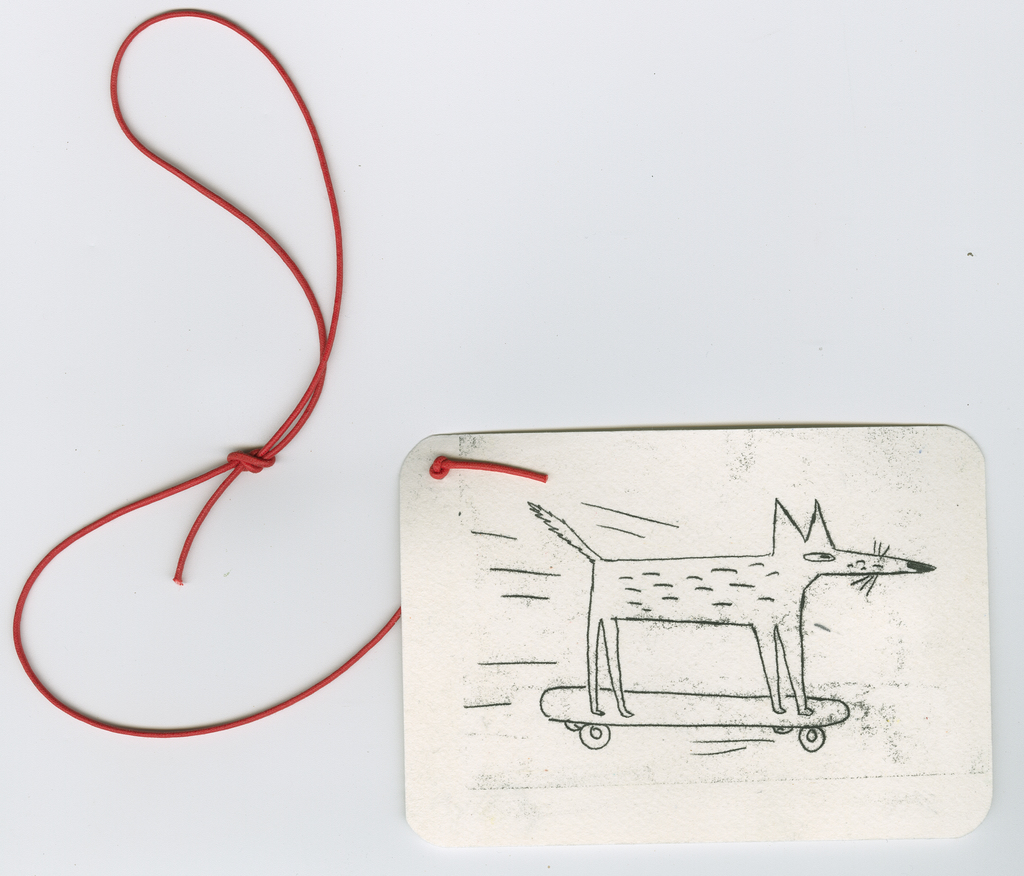 There's an old Buddhist saying: When a person gives you a dog don't thank them until they give you a second dog. Probably a poor translation but I think the meaning is quite clear: I now have the two dogs. It's time to thank. Above: Dog one. We like to keep him on a lead otherwise he gets carried away. …

Carina and Katerina in the Fall

Is it a halloween card, a birthday card or just an old photo of cafe society circa 2017? I'm not sure but for our purposes here we're callin' it a Halloween card from Carina of Finland. Thank you, Carina. Below we have placed the card in a traditional "scary" tableau relevant to our national holiday of horror.… 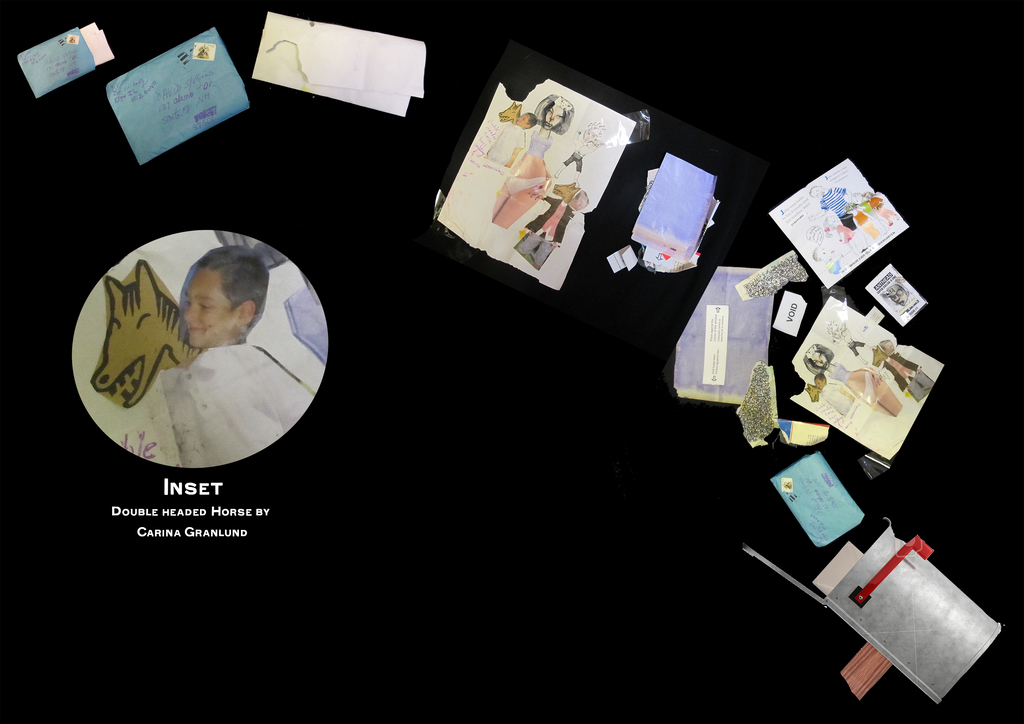 The Family DKult sent a huge package of things (most of which I've returned) (as required by law). As you can see from the Inset Carina G's laughing horse was included in the mix, not once but dos, and, as I discovered somewhat tardily, also in the package was an Anthead Super Collabo-zine add-and-pass which has since been added and passed. Let's take a closer look the… 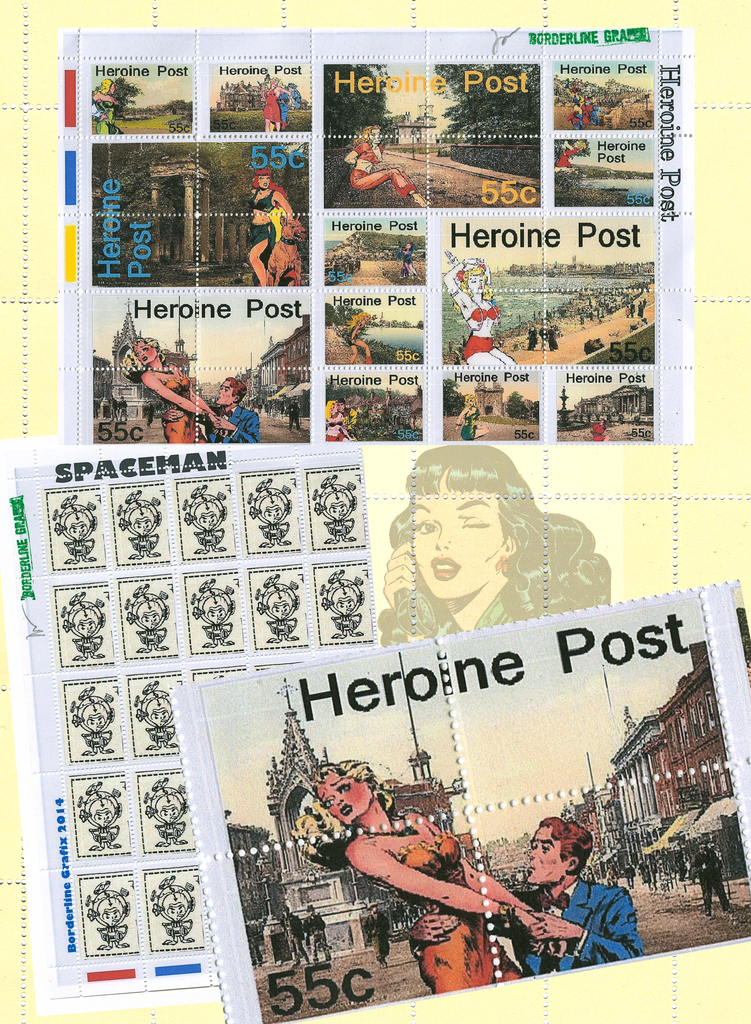 The allure of artistamps is irresistible. So many mini-canvasses, so many great graphic forms to riff on, plus perfs! Here are four different artist approaches beginning with Borderline Grafix's homage to the classic "good girl" graphics from the Golden Age of comics.…