Dean Marks, merry prankster in Paris, sent me this gargantuan card. The scans do not convey its heft, supplied by a piece of plexiglas from a fallen traffic signal. In other words, industrial strength trashpo or Traffic Light from the City of Lights (they can spare one). Featured on the front is another of Dean's barcode creations to which he has affixed my head. Aside from aiding and abetting my cult, the entire thing resembles a costume drawing for an Ubu Roi update. The barcode booties look particularly comfy. (Memo to self: IUOMA needs a hardheaded marketing consultant to turn all our ideas into gleaming bars of gold bullion). Instead of my usual A, a G is emerging from the fliptop head. G is for Ginger of Gilligan's Island fame (aka Tina Louise). Dean and I, realize there are only two kinds of people in this crazy, mixed up world: those who prefer Ginger and those who like Mary Ann, her unplain sidekick. I admit to having a few Mary Ann moments but in the end it has to be Ginger. 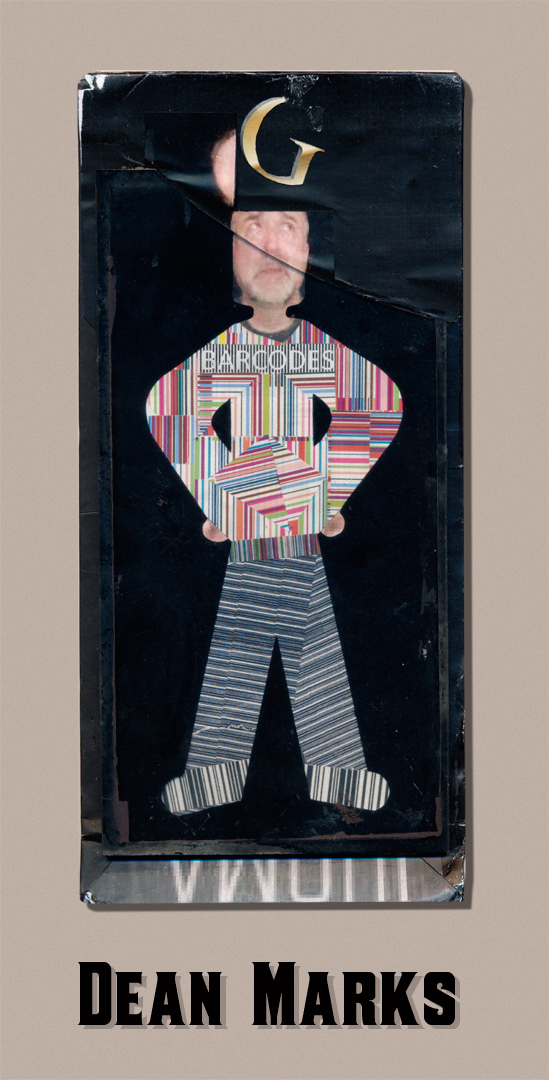 On the back, Dean's helpful explanation about the origins of the Trashparispo plus Olympian Weight Lifters in the shadow of Le Tour Eiffel. In short, a whirlwind tour of Paris in Barcode Booties with Dumbells attached for increased heft. Uh oh. Please don't, Dean. But you can send me Howdy Doody.

I like the framing.  Happy it made it to you little buddy.  Am I made to believe that there are people in the world who has not seen every Gilligan's Island episode made?  Forget world hunger, we need to send people DVDs of Gilligan's Island.

Barcode Pajamas....yeah...get the marketing people on this immediately...

Gillian's island is back!! :-o and still no red/white checkered bikini to be seen.

Bar code Stafford is looking good. It's like pajamas.

What great MA from Dean. The barcodes-you is unbelievable. It's the best barcode work of Dean's I've seen yet, which means best barcode art in existence. I don't want to argue with you, David, especially when I didn't see every Gilligan's Island episode made, but are you sure Ginger and Mary Ann aren't both unplain? Nice catch today, anyhow!