'M' for Marks + Marvelous with barcode history on back side. this piece arrived in pristine condition. Thanks Dean. 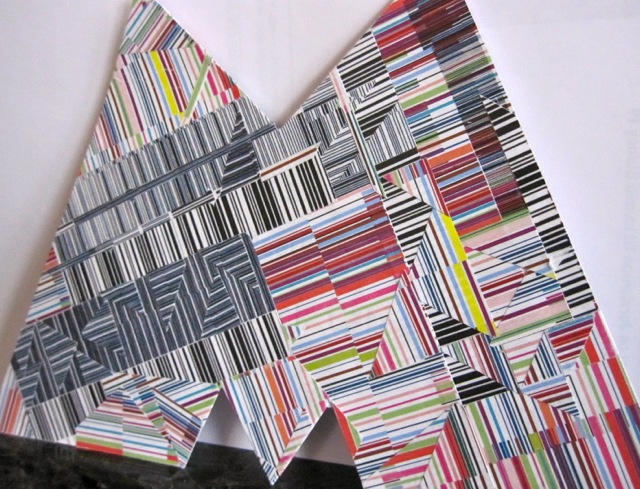 Many materials! As a non-reader/speaker of Italian I am finding them a challenge, but the instruction to "fun yourself" makes a lot of sense to me. The CD, with sounds/songs such as "Several Species of Big Wet Animals Gathered Together In An Undersea Cave and Grooving With a PC," "Whales Cry," and "Disco In Sealand," has already been listened to and is quite interesting. Don't let the cover… 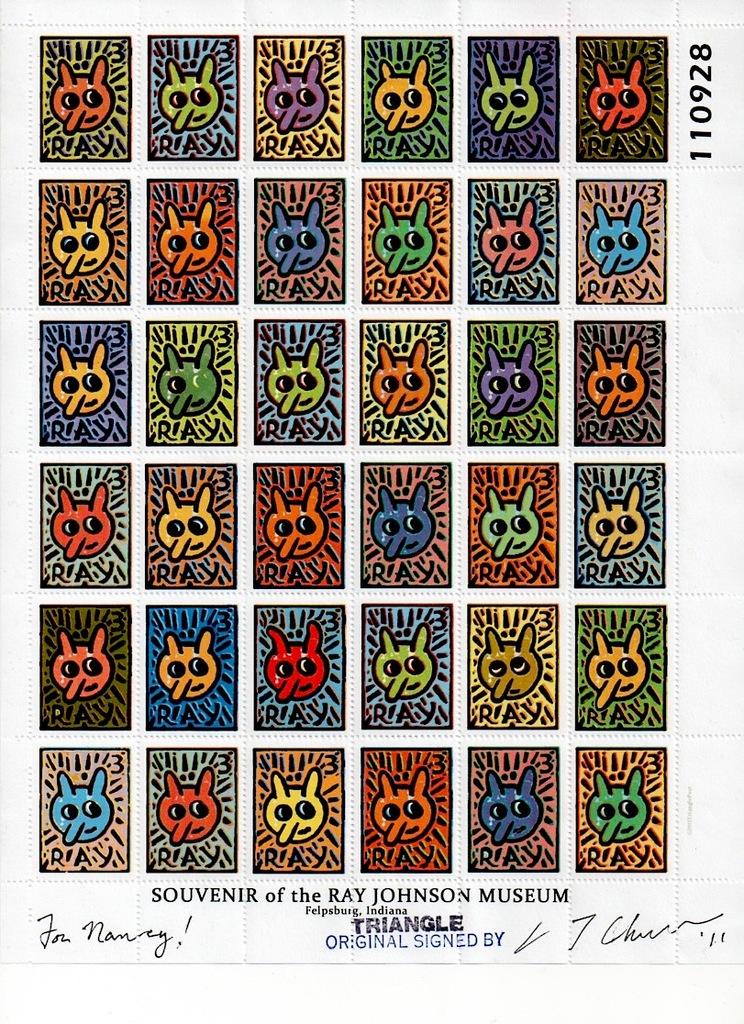 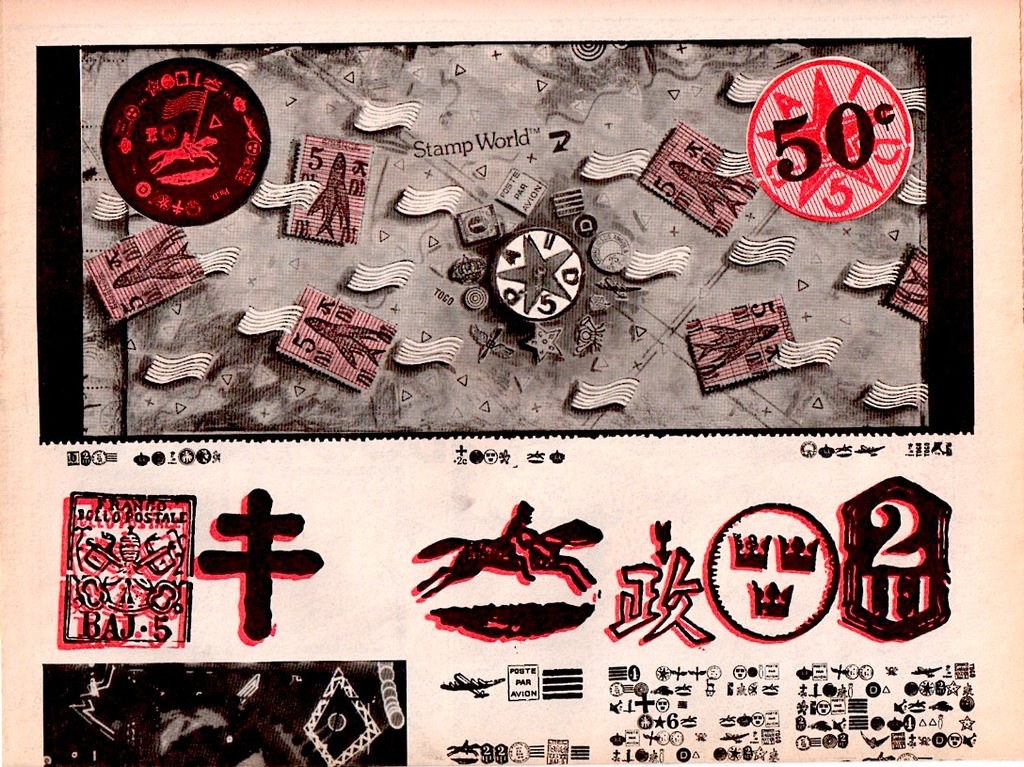 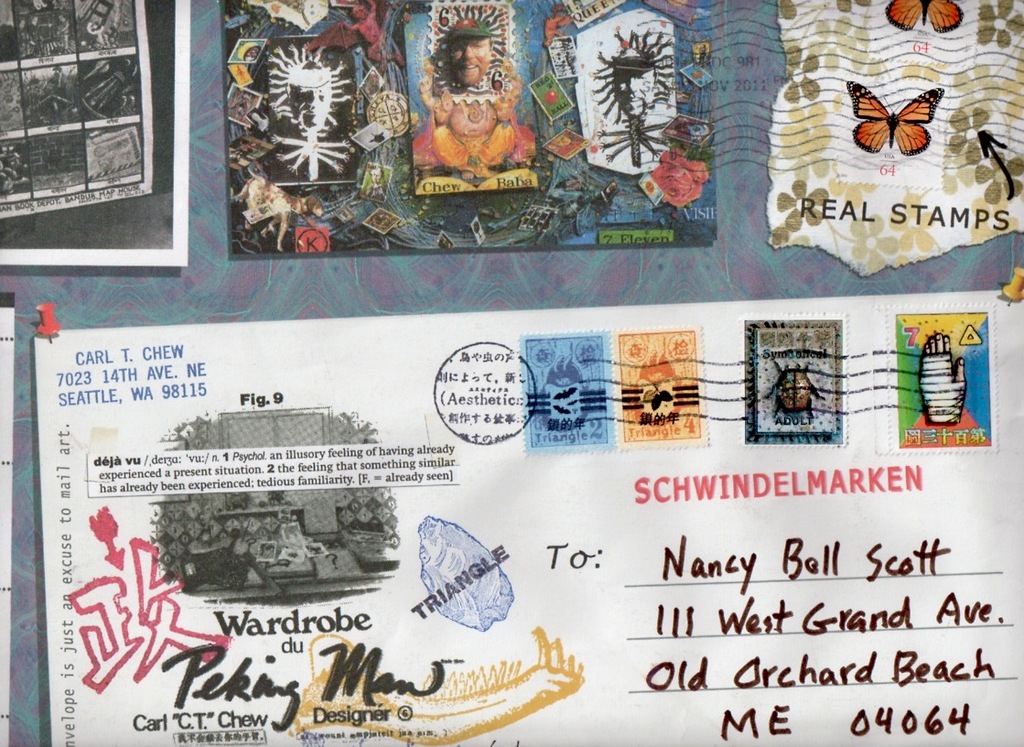 Kerri sent the following smokily nice piece (with my name and address on a lovely green back), and her special envelope is included in the photo because it is really striking (notice that my postman doesn't mind marking up mail art on a bad day!). Thanks very much, Kerri:…

By Guido, "Moths Crossing the Danube Around 1890": The imagination in this piece--the concept, the title, and how it was constructed--floors me. I did get a kick out of finding moths crossing the Danube long ago when I opened the envelope! Speaking of the envelope, here is another of Guido's beauties that I love, "Rules to Dodge and Other Games," dedicated to Bob Dylan:…

Botticelli book cover, that is, a nice one: 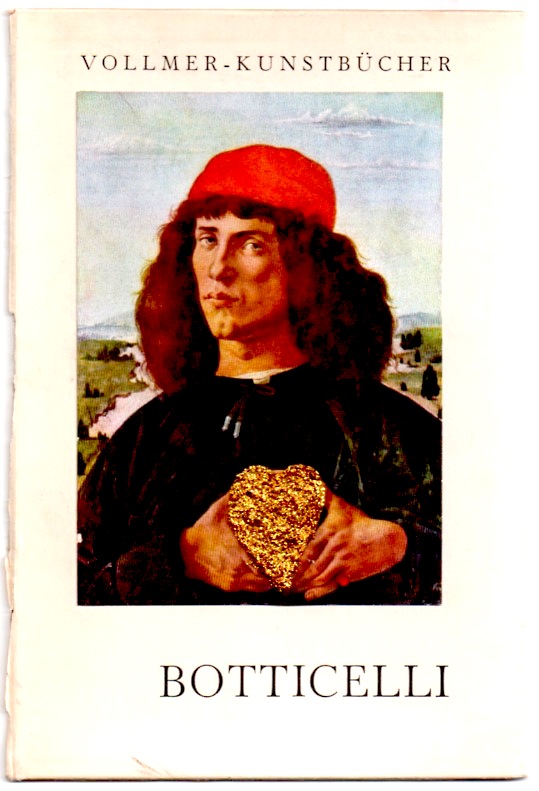 This is a thank-you note, according to Svenja, for the book cover she liked so much--notice the beautiful gold heart in his hands. It might be a little forward of Botticelli, but I don't mind! On the address side Svenja uses a "pfg" stamp or print block, which I am also very taken with and she says she bought along with some other…

And I love it: 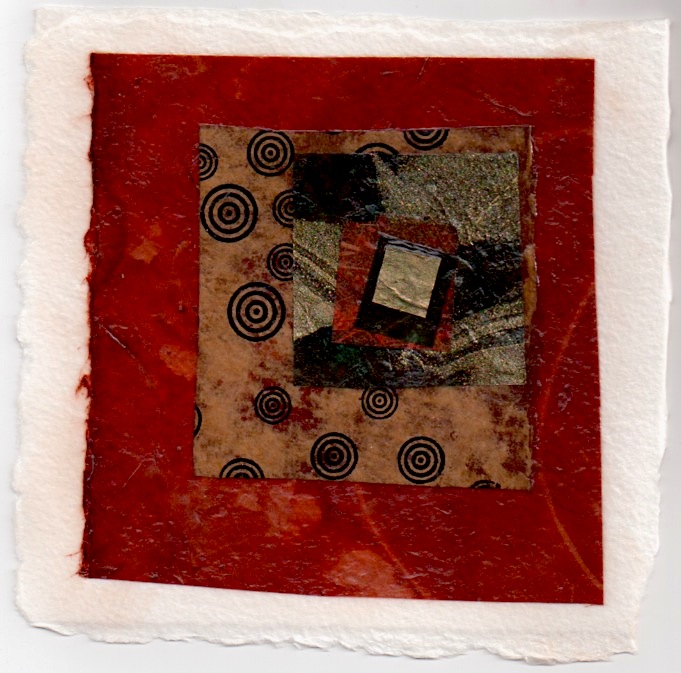 Beautiful composition and use of color. The piece is hard as a rock, like everything I've received from Judith, and there is something very appealing about that aspect too. (It might almost be bulletproof, like Erni's packaging!) Her lyrical words, which she often includes, are on the back and are lovely and appreciated. Thank you so much, Judith ~…

Here is he is, describing himself, sometime in the 1950s:

It's kind of sad to learn that David's only "distingwishing" feature was "maybe" his back teeth, since probably few of his classmates actually got to see them. But we have learned since that David has more than one distinguishing feature, such as his hair in the 1970s during his presidential run, his spooky eyes even…

...in this wonderful wrap-envelope that nearly didn't survive the postal system: 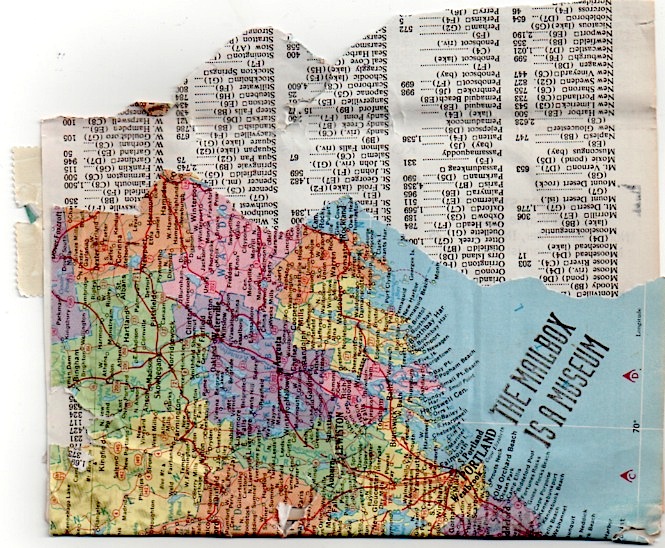 The envelope arrived torn, with the book-covers educational brochure sitting beside it. Lucky! Lisa tells me she took the chance because the map is of my own part of the world. You… I'm involved in Plot49, an alternate reality game, based on 'The Vrying of Lot 49' by Thomas Pynchon. It features W.A.S.T.E., a fictional (?)  underground postal network. Reading this lead directly to my interest in mailart. See www.plot49.com and @plot49 #plot49 on Twitter. Ideas welcome. This is my first christmas mail to receive this year and so perfect to have a holiday trashbook! Amy also made me two christmas ornaments-one is an abstract angel.The pictures didn't come out on those but they are hanging on our tree. I'm going to post all the pages in the All Things Trashpo group. Thank you Amy!!!…

Karen sent me these two pieces made from scraps from her table and a dryer sheet. Her art always look like ancient artifiacts that have been uncovered. Love her style and elegant trashpo. Thank you Karen! 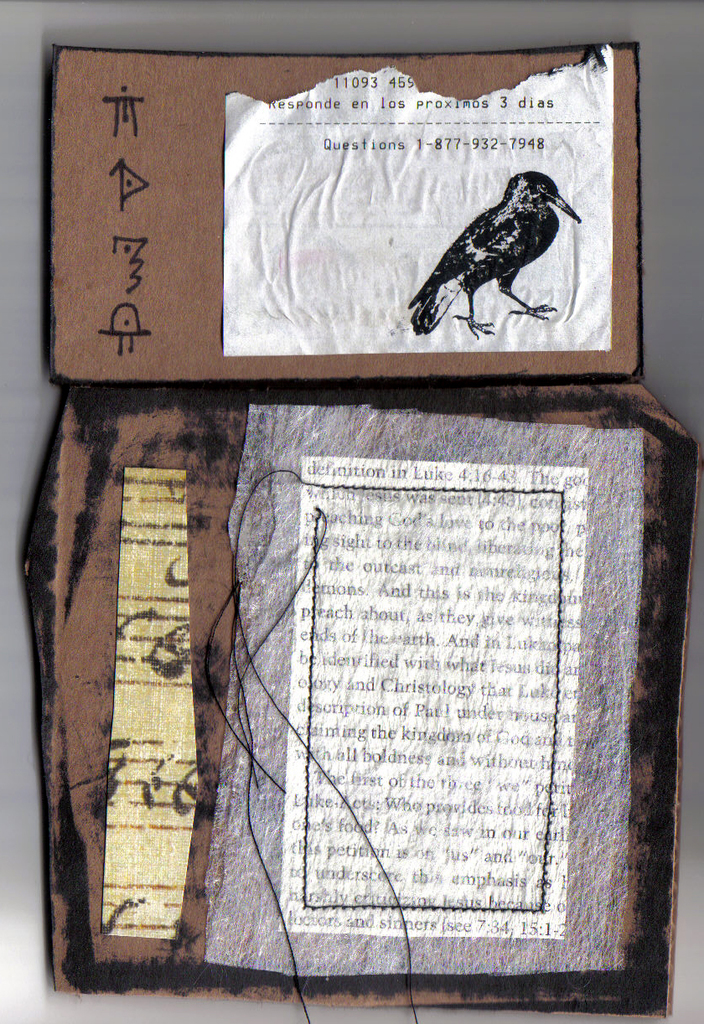 That Piggy from Grigori Antonin 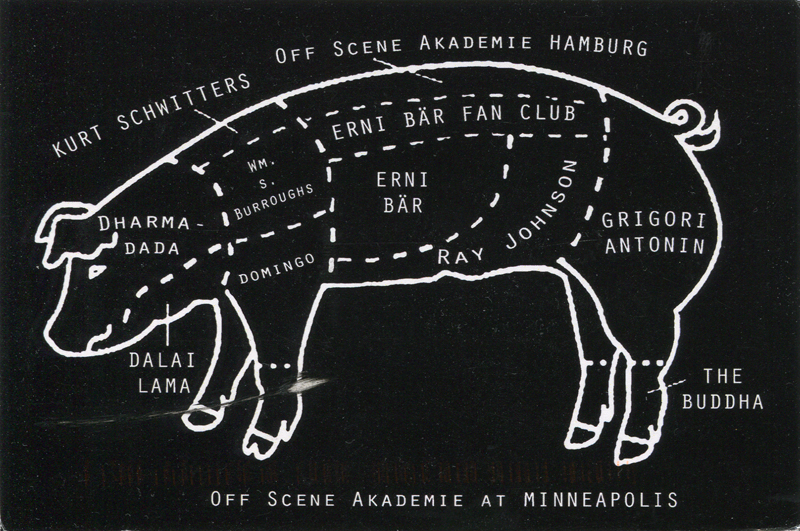 The Off Scene Akademie At Minneapolis has issued a new and very interesting Taxonomy. I'm studying it every day ever since I found it in my mailbox, it keeps me occupied when commuting to work. There's one piece I am still struggling with. Who's…

Here is the most unusual, an experimental paper with wax, front and back: 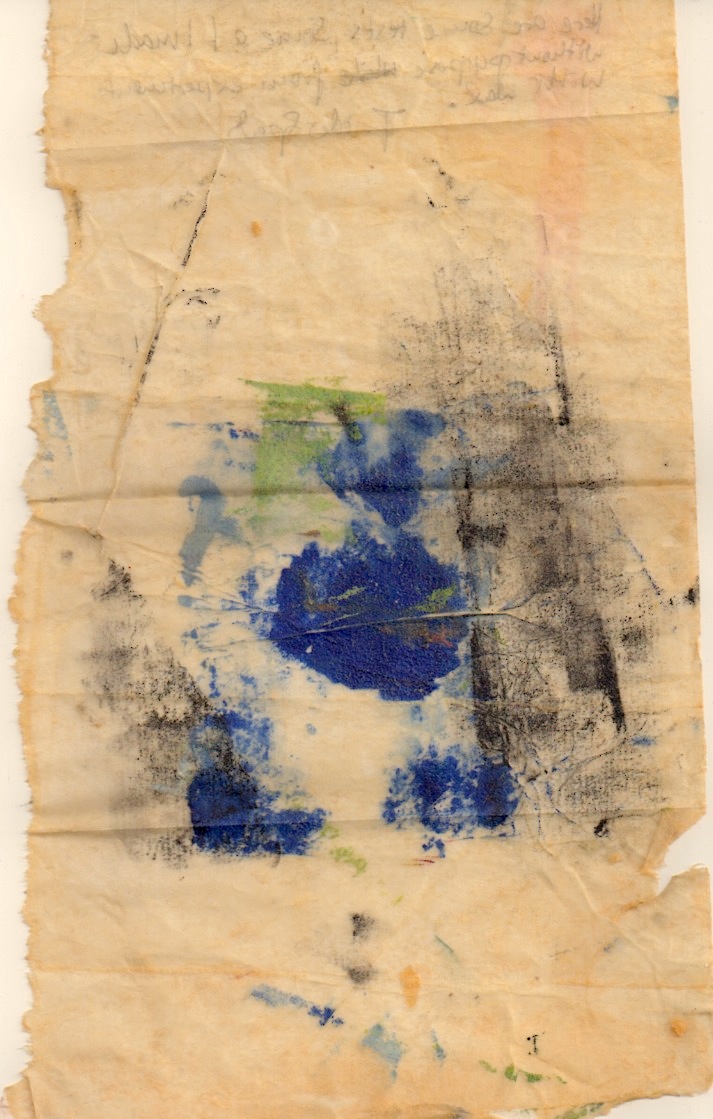 The texture of this thick waxy paper that still smells like wax is beyond description. I can only say that it's a grabber, the feel is like nothing else, and I touch it at least once a…

First Solstice III, one of my favorites from Theresa, with a Ruskin quote on the back: What follows is, I believe, a New Arzamas letter communication from Theresa to me, rich with Kandinsky, Mallarme, and ... Williams!…

A great deal of richness in these two mailings, the first on "outsider" art: 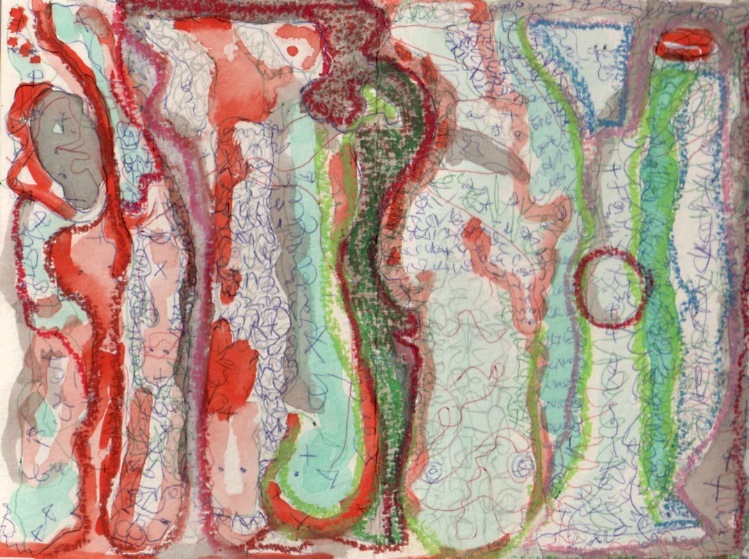 The second, Solstice II, begins with a wonderful asemic collage by Theresa--torn out of her own journal--accompanied by a Kenneth Ames quote on the back:…

Received this today from Nancy. It has her characteristic style of outlined abstraction-controlled chaos. Look like windows to another world that can not be contained by those two boxes. I love the layers of paint she has used. I also received a chubby envelope full of fantastic trash-including pulverized mcdonalds packaging. thank you for your generosity Nancy:)… LOVE the new piece received from Svenja Wahl this week. I have always loved her creations, and the incorporation of old photographs. What a nostalgic piece, does this photo have any significance to you or Germany? We love it and appreciate all of your mail art - so great to be IUOMA friends, and keep up the fantastic work.