WISH YOU WERE HERE -- NOT! A COLLECTION OF BORING POSTCARDS.... from Val Herman and the Boring Postcards Group 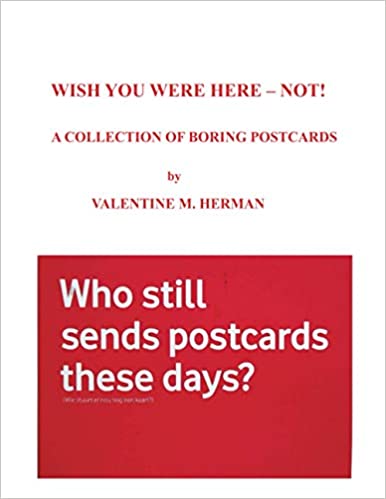 This book nis now wavailable from amazon.com (and various other Amazon European sites). It's author is Valentine M. herman. The price is $46.00, which is a lot, but it contains 400 Boring Postcards and has 250 pages. All Mail Artists should buy a copy of the boo for themselves, their spoused, boy-friends and girlfriends, children, relatives, neighbours and pets.

Here is an extract from the Summary of the book:

For over a hundred years, postcards were one of the main forms of mass communication. They had many attributes. They were inexpensive, and cheaper to buy and send than letters. Although they were relatively small (about 150 x 100 cms), a short – if necessary, undemanding – message could be written on the, and enabled people to stay in contact. They had visual appeal -- often a photo in black and white, sepia or colour appeared on one side. And, in London, and other large cities, where there were up to five deliveries a day, if you sent a postcard in the morning you could receive a reply the same day – and often before lunchtime!In many ways the humble postcard was today's equivalent of an email, an sms, a Tweet, or a visual photo sharing platform like Instagram or Facebook.This book contains photos of 400 postcards from the pre-Internet era. Out of the thousands of postcards that the author has looked at over the years, he has deliberately chosen a selection of Boring and Dull Postcards, continuing in the footsteps of Martin Parr who produced three definitive books on Boring Postcards at the end of the 20th century. His choice of postcards has been facilitated by members of the International Union of Mail Artists (IUOMA) and the philosophy of the Dull Men's Club (DMC). In this book, Val Herman poses five questions about the Boring Postcards that come from all over the world. First, why did a photographer want to make a postcard of a particular boring subject? Second, why did some printer and some seller think they could make money from a Boring Postcard? Were they economically succesful? Third, why did anyone buy a Boring Postcard? Fourth, what messages – verbal, but especially visual – did the sender of the Boring Postcard mean to convey? Last, what did the recipient of the Boring Postcard make of the visual image and/or the verbal message?Whether you share the author's views that the postcards are boring and dull or interesting and gripping is a subjective experience.You may agree with him, or not.Look at the Boring Postcards. Read the short introductory texts to the 21 theme-specific chapters and decide for yourself.

This is fantastic!  A great boring cover design teases not.