Here is just a portion of the stuff I've received since ...April? Bad, bad, Dave....(He smites brow mightily.) Maybe the oldest piece of mailart in my inbox was Katerina's birthday greeting. (Still smiting). But I think I have a pretty damn good excuse. Sorta....not so much... 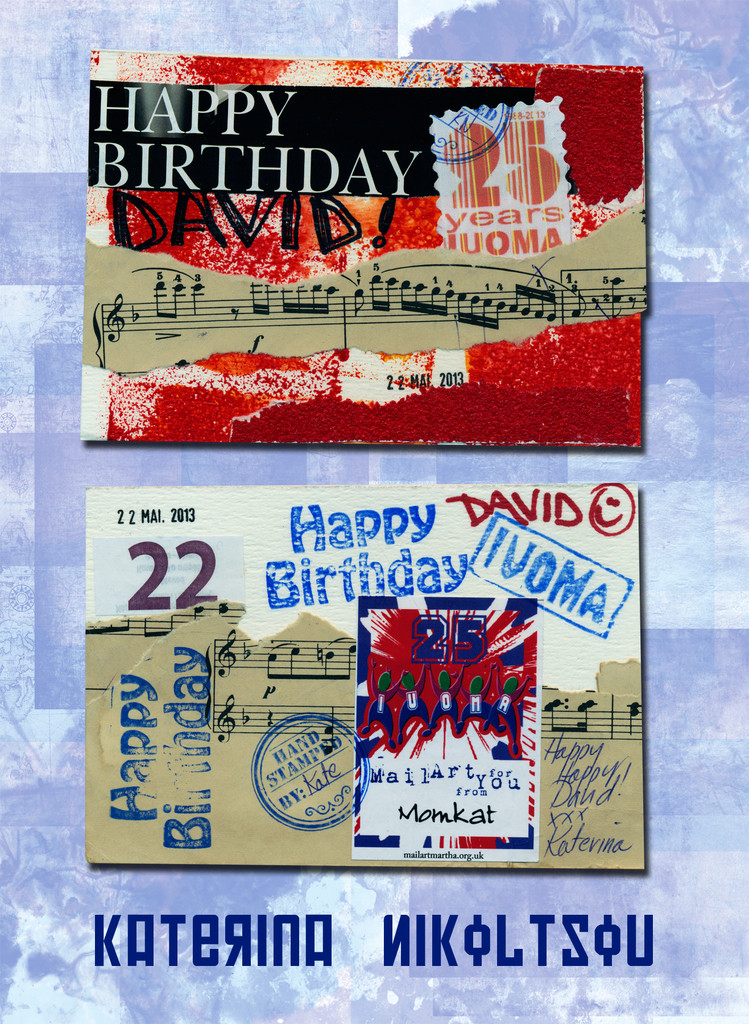 As you can see this card is covered with hapticity. They may be red sprinkles or they could be a coarse grade of sandpo...(BTW, how is sandpo graded? Is 400 grit equivalent to doggerel and limericks while super fine is very Charles Olsonish or Jorie Grahammerite?) At any rate, my lame excuse is that I couldn't scan MomKat's card without scratching the scanner bed. Katerina, there is such a thing as being too haptic. If I were in a different frame of mind I'd break into song here...(synaptic, papflick, naptic, raptic, I'm working around the 5000 grit level.) It's a wonderfully sexy bday card. And musical. (The sheet music was taken from "Waltz of the Dead Marionettes.)  Thank you, Katerina Just a couple of days ago Carina sent me her composition, "Paint," which is all about the interaction of color. And it's Safe for Scanners. I also loved the friendly robot which makes a lovely wallpaper pattern for bed or bath and comes in a dazzling array of colors including but not limited to Matterhorn, Punk Panther, Fusilli and White. Thank you, Carina. Look to your local paint store for more Granlund Wallpaper patterns. Remember it's not wallpaper, it's a lifestyle. Okay...I just had a brilliant idea...we need to hire a marketing specialist who can turn our humble mail art into big, big bucks. Yes, we don't do it for the money. We would never soil our panties in this fashion...however...we could hire someone to soil their own panties. Hmmm....I think I just beat my own record for going from zero to disgusting in nothing flat. Please, pay no attention to that man in the grimy grey bathrobe. He has forgotten to take his meds. 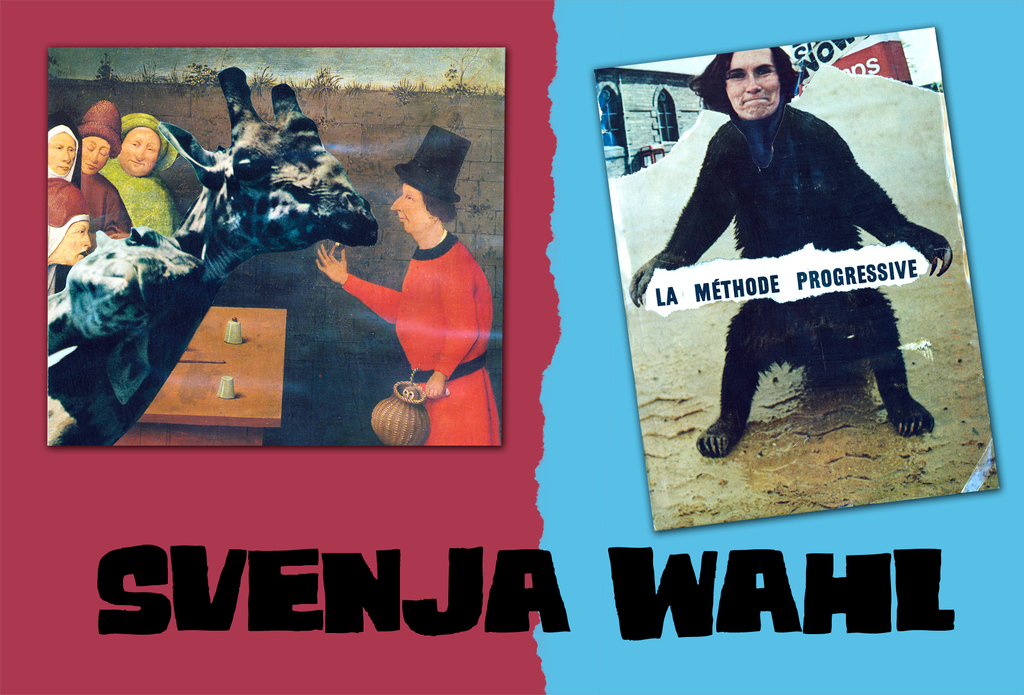 Svenja sent me not one but two of her droll collages. The title of the piece on the left is: "Hieronymus Bosch and Me," which I think could be a touching miniseries. Receiving a concussion after slipping on a brat at the biergarten, Svenja awakens in a vivid Boschian landscape. Looking outward from the painting she sees....Bosch tickling the chin of his pet giraffe. I'll see if Dan Brown is interested.

Not sure if the envelope art has a title but it's so typically Wahlian: beautiful assembled with wit and ingenuity. Thank you, Svenja. Mim is experimenting with mimimalism again. In fact, she titled this piece, "Minimal: with circles and Uncle Harry." Whenevereth you find a pith helmet and palm fronds together there shall ye find a jungle saga. It's as clear as day. Thank you, Mim.

Apparently in a fit of pique I sent Vizma a "woman sucking on a boob." Now she has responded in kind with.... Well, my best guess is....an androgynous talking pickle. If you zoom in you'll find the telltale false eyelashes which, according to the Walt Disney Manual of Gender Depiction, automatically connotes the feminine. However, we also see a bit of yang here and there. It's a damn difficult call but all in all an apt response for a "woman sucking a boob." Thank you, Vizma....Was it a love letter or creepy mail art? We may never know.

Finally, I received this amazing opus grande from Nadine. 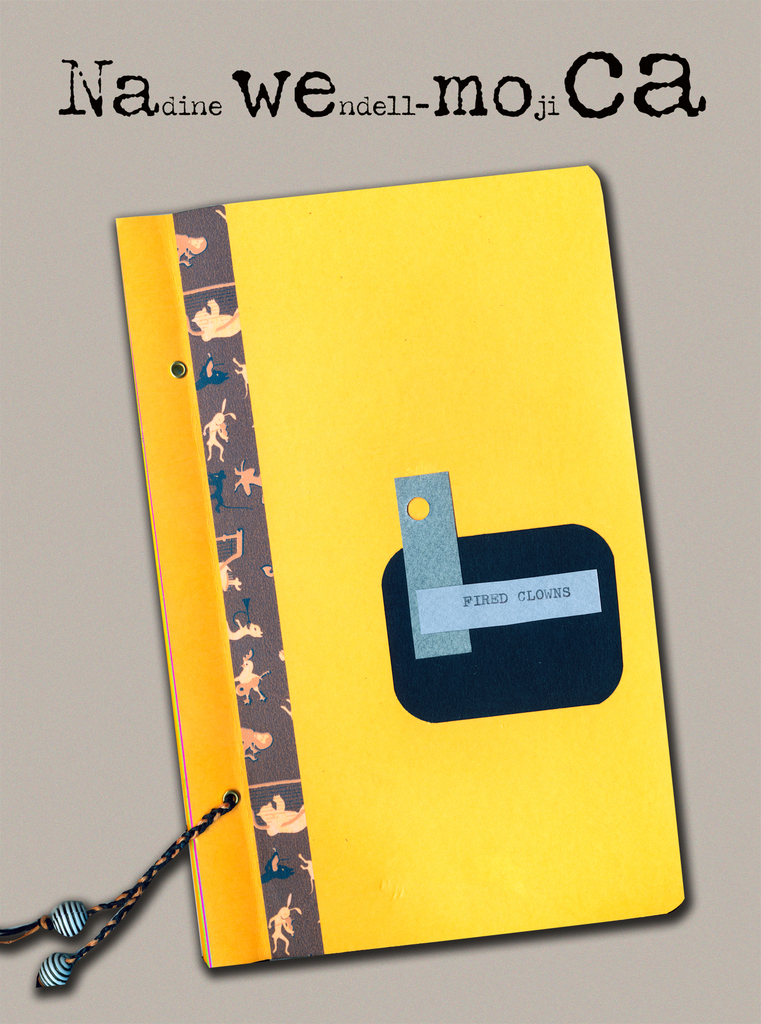 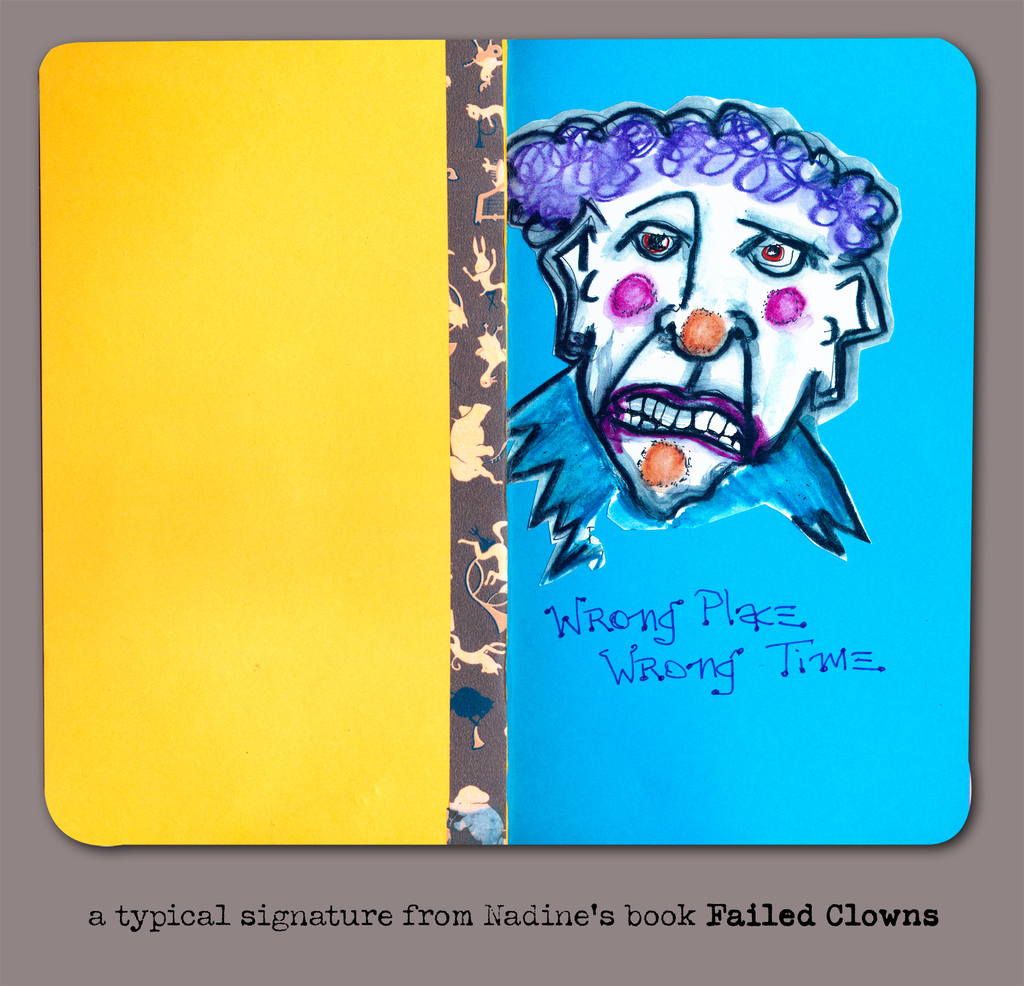 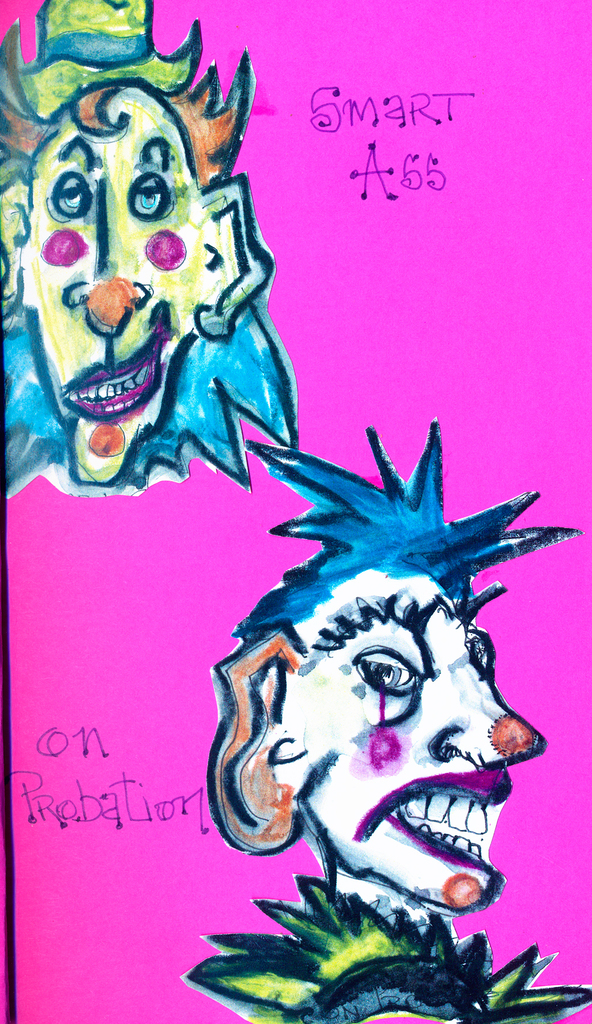 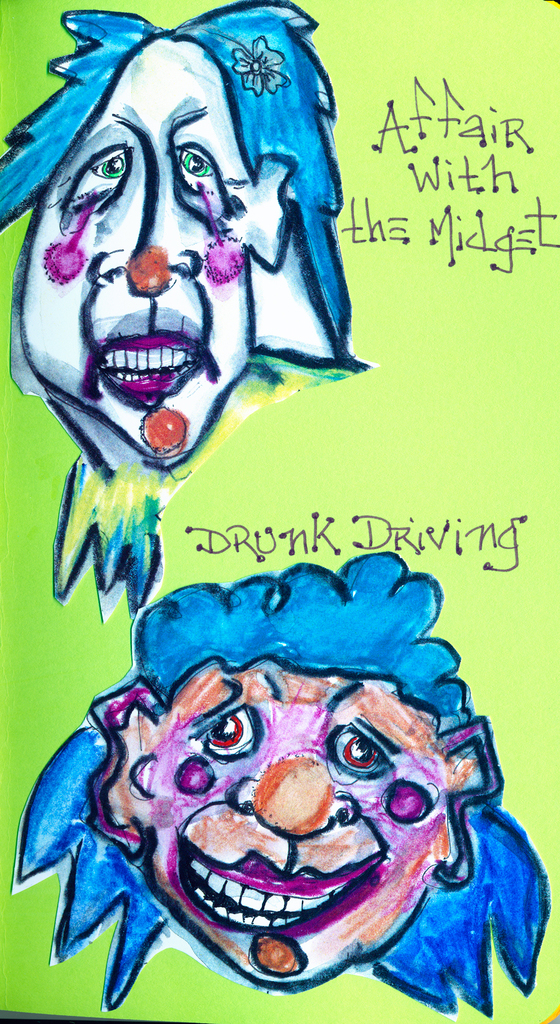 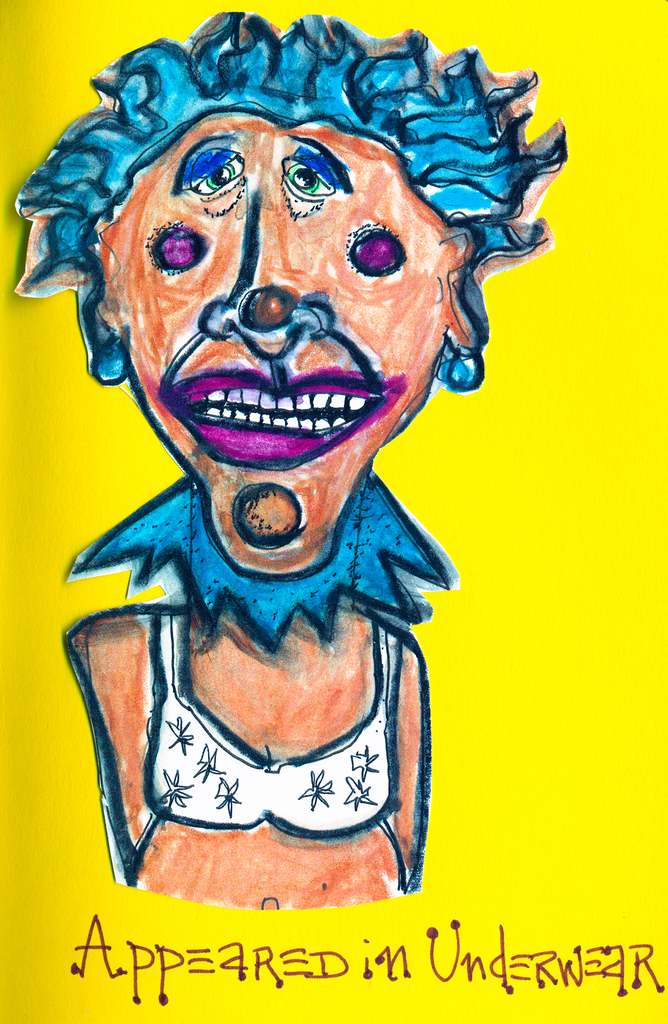 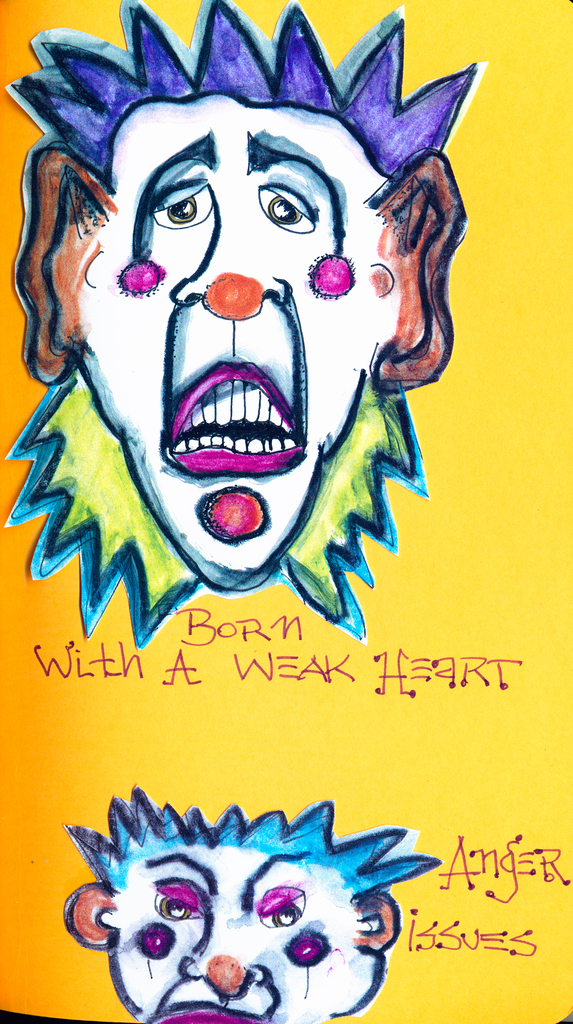 Okay, here's the backstory. For many years Nadine worked in the Human Resources Development Division of The Ringling Brothers Circus. Her supervisor Leonard Boskell (aka Morty the Mime) asked to to assemble a booklet he could hand out to potential clowns, a category we all tumble into at one or another. It was a way of expediting the hiring process, weeding out the bad apples and generally creating a successful clown profile by defining its inverse. Nadine, who was suffering terrible allergies at the time, had taken what she thought was a dose of Nyquil but was actually a bottle of  Spironexicaline. The side effects: every verbal impulse is transferred synaptically into the visual. Hence, the boekie. My own personal favorite: "Third Warning," but every one of them belies an insiders knowledge of  bureaucratic systems. Needless to say the book is in its third printing and has been sent to clowns around the world...of which I am one. Thank you, Nadine. I hope I haven't revealed too much...Truly, this is a magnus opus.

Again, thanks everyone and the blogs will continue once I am out of probation. You responded to a deleted comment, thanks, er sorry. I thought the Olson particle physics stuff was too obscure even for me.

I also wrote I think Nadine eclipses John Wayne Gacy with the clowns. I don't think they use them as motel room art any more.

Great blog, as ever.

Affair with a Midget is also quite nice...yes...I really know nothing about Olson but I imagined him on the upper end of the grit scale...Same with Jorie Graham...I subscribed to Poetry but I have to say I find the prose more compelling than the poetry...I guess I like the idea of poetry more than poetry itself. Nadine's reasons for firing clowns are poetry to me....

Comment by Susan McAllister on July 8, 2013 at 2:35am
Nadine, don't stop taking the Spironexicaline. It's working for ya.

You are the master at ferreting out the back story on hither to buried information. Indeed I didn't want folks to know you were on your 3rd warning. Such small offenses. Peeing out the clown car window...what's the problem??? Anyway my tenure as HRDD for Ringling Brothers ended when I found out there's a growing movement to boycott due to animal cruelty. So I went to Circus Vargus. This was indeed the gold standard in the weeding out process with Clown Hire.

See ya' later I have to take some more Spironexicaline.