Okay, an apology to those who have been patiently waiting for me to blog their pieces. I received the following yesterday. As you can see there seems to be a theme which implies a certain urgency here. On the left we have Susan McAllister's mangled medical textbooks, a cool green assemblage of malpractice or genetic scrambling over some mysteriously ambiguous text. On the right one of Wenchkin's deeply layered paintings which my scan does not do justice to. As my ex-wife used to say...actually still says, "If three people tell you you have a tail you'd better turn around and look." Which is why I'm wondering about that new ache I wake up with these days. Everything is connected, dem bones included. On the back of Susan's card she says rather innocently, "Hope you're having a great summer," which, given the front of her card seems to beg the question....because your fall is coming shortly. (Yes, I know that really isn't a question but give me literary license, okay? I'm a possibly dying man.)

Which of course, is what everyone is every day. A couple of days ago someone brought in a memorial program into the print shop for their father which included this poem by CZESLAW MILOSZ. 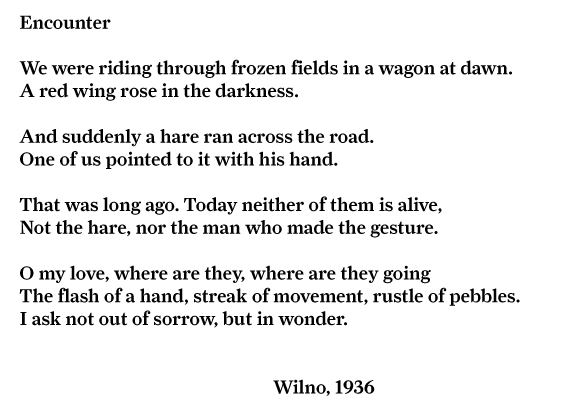 This, in turn, reminded me of a vision I had at the blues and brews fest in Telluride a few years ago. The band had the crowd on their feet and upfront where the grass ended and the dirt took over, people were flailing like mad, arms and legs akimbo, raising the dust into the air and I, without benefit of brews, blues or other intoxicants, suddenly saw a huge pile of bones. Something in my brain fast forwarded a hundred years when these manic bodies were stilled by time. This poem, with just a few brushstrokes, illuminated that kind of moment in reverse. Here's the back of Wenchkin's card which I enjoyed because she substituted the chop I've used in the past for my name. Thank you, ladies...Let's hope there is yet time for a response.

Comment by Susan McAllister on July 21, 2013 at 8:19pm
Vizma, you are right, Evolution Gone Wrong would be a great mail art call. Unfortunately, I'm not able to host it, but if you or someone else wants to do it I would be pleased.

What a fabulous diptych you have there David! I looove these works, nice to see Wenchkin again.

And Susan, Evolution Gone Wrong is a terrific concept, that would be a fantastic MA call.

Superb blog as always, David. That Milosz poem is a beautiful random find.

To see Susan move out her trademark red & black pieces into this gorgeous green - fabulous! And the way it juxtaposes with the contrast is what? Almost eerie?

Comment by Susan McAllister on July 21, 2013 at 1:39am
All I can say is, live every moment to the fullest. Oh, and the piece is from a series called Evolution Gone Wrong.