Blogjamerama: in 3D! or not 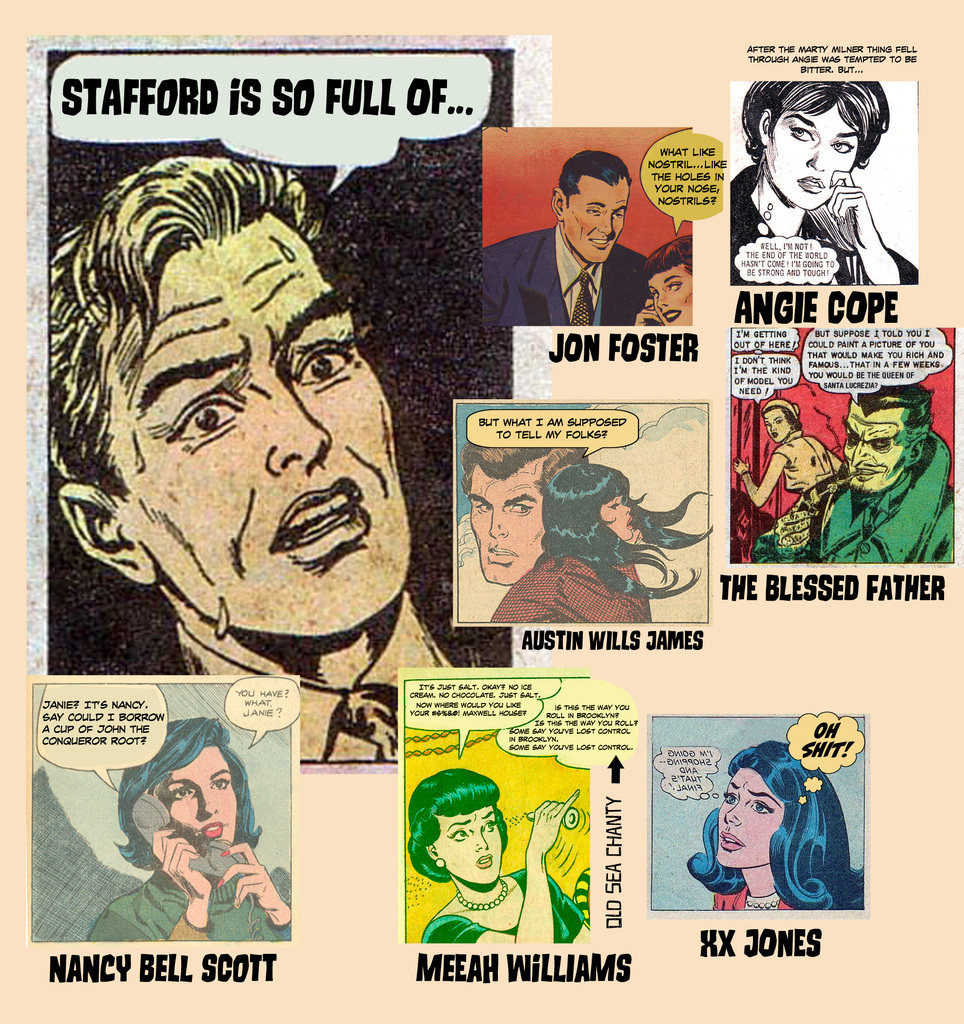 Angie has sent me two cards since I last blogged her stuff. Some of these go back to early Stonehenge. I favor the cow one as it has a certain musical quality and it suggests a collage made of old wallpaper and curtains. Kinda 50s flavored...to my eye anyway. Thanks, Angie. Sorry the Milner thing didn't work out...I have more tricks up my sleeve. Okay, something's in the air because Nancy and Meeah both sent me games of chance. Nancy's is called The NBS Freestyle 3 Scrapper. What you do is....read the instructions in the upper left. Nancy's results are in the middle. I think Nancy intuits that I have more little scraps of stuff that I can't part with because they'll seem right for some obscure  future project. Nancy's game has been used therapeutically to address the pressing issue of early onset hoarding syndrome. (EOHS) Nancy, I promise to record my adventures with NBS Freestyle 3 Scrapper for future mail art. 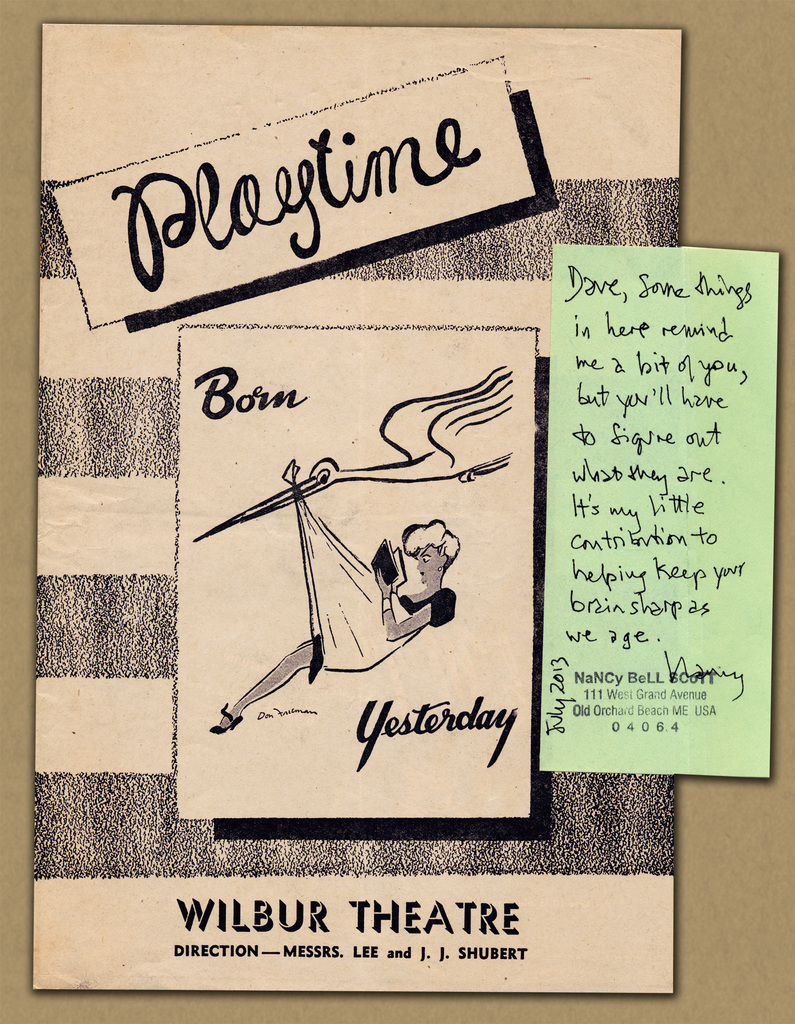 Okay, on the one hand Nancy taketh away and with the othereth she giveth. Also in her package were two great pieces of ephemera. A Playtime not a Playbill. Must have been copyright issues. And this wonderful artifact: which has already garnered two favorites over on my Flickr site. (I just bounce from fave to fave on the backs of my friends.) Thank you for your generosity, Nancy. I'll return fire shortly. 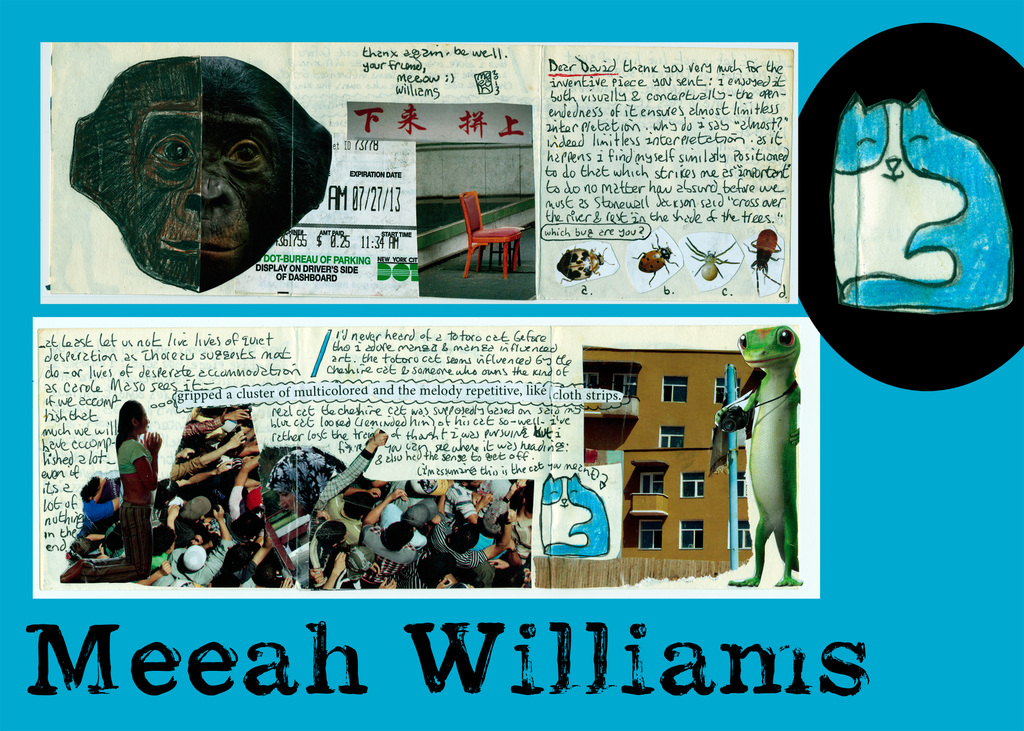 Meeah also sent me a game of chance. As well as this wonderful letter which ranges from Stonewall Jackson to Totoro and trains of thought that got derailed though no one was hurt. 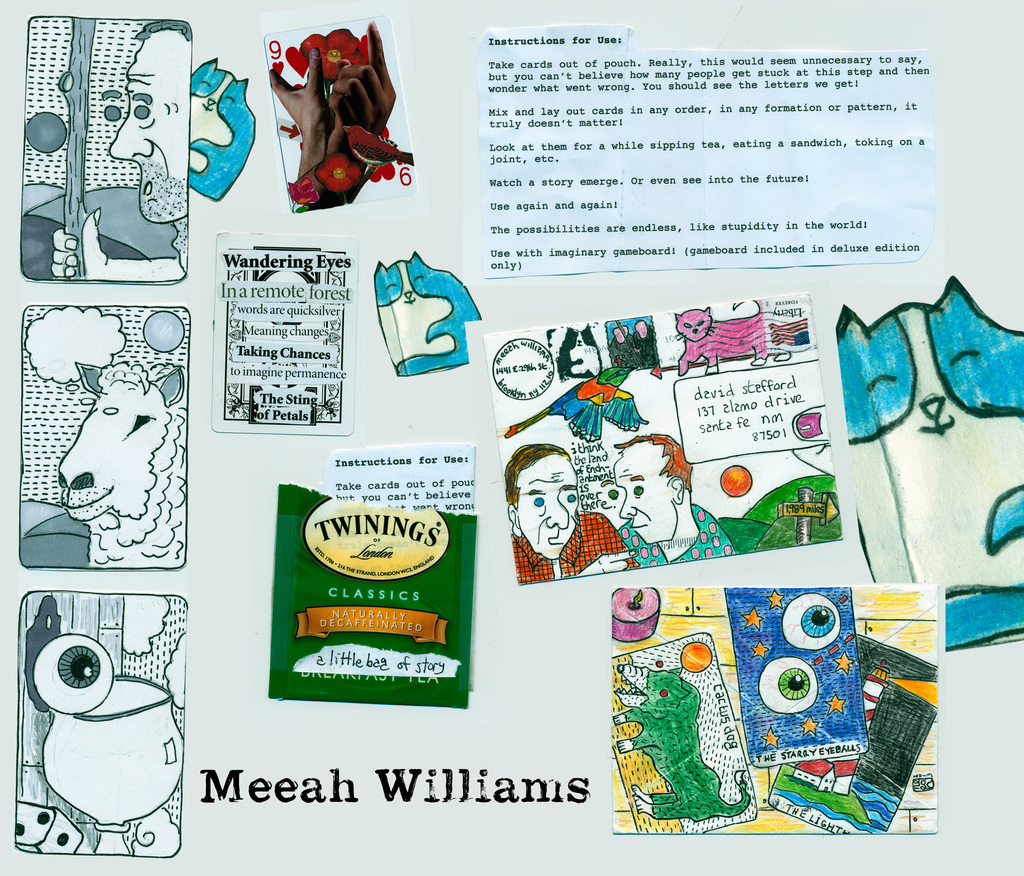 And here's the game and the envelopes it came in. Envelopes being Meeah's real ouevre (Sp?) Anyway, she paints her tarot deck of characters in various guises on the envelopes. The walking eyeball, for example, seen here in the stars. And the blue cat which I thought was Totoro. (See letter above). Is it really 1989 miles from here to Brooklyn? There's some fable mixed all through this. I believe it involves a pilgrimage. Monks wander about and up there in the left there's a guy with a staff....wait a minute! (he smites brow to a pulpy red). Thank you, Meeah. A cornucopia of delights from that old blessed father. I was starting to worry a bit about TBF's iconography. A mean, Il Duce, Oswald Mosley, Werner Von Braun....what did they have common? Then it hit me. They're all guys with noses. Suddenly the grim doubts dissipated and I did too. Thank you, Blessed Father. 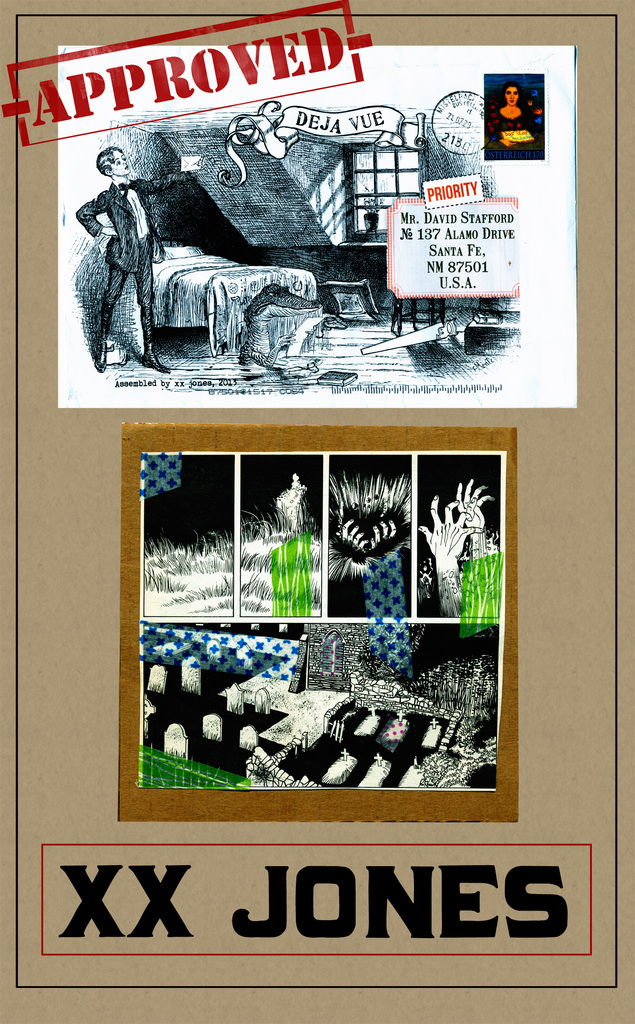 xx jones sent me this cryptic lyrically enhanced comic strip. This came in an envelope with a style that seems to cross Gorey with Ernst. The address in a lovely font....what is that, xx? Thank you. 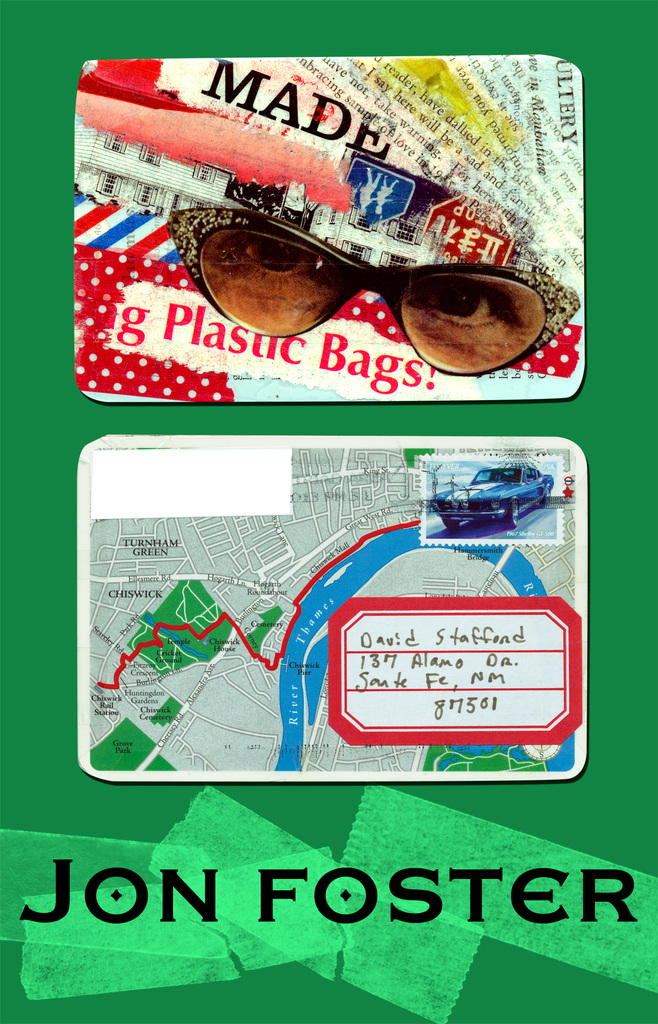 Several years ago Jon sent me this card which I feel very bad about taking so long to blog. It was the middle of the Crimean War and I had just given birth to seven babies and you know the drill...Anyway, here it is...Return of the Invisible Man! I mean, that's what comes to mind when I look at it...

More recently (PCW) Jon sent me a huge packet of stuff. His Golden Ticket Collection as well as his writing on movies that he's tasked himself to watch. They're not exactly reviews. They're more like first impressions and I highly recommend them. I laughed out loud several times (Okay, three times) But if you knew how sour I am you'd know that's a lot for me. Finally....Ladies and Gentlemen....I give you....

Jon, as it turns out, is a renaissance type of guy. He has a band called The Nostrils and his package included a CD of their work. What is the music like you ask? Well.....it's ....spontaneous. Jon didn't set out to make a record. He set out to redefine what a song can be. By any definition he succeeded. I could see The Nostrils music sneaking into Michael Cera's next film. I would not recommended listening to the whole record the way I did, however. Give yourself little breaks. Intersperse a little Ken Nordine in there somewhere. Maybe a little Bonzo Dog. Let your mind savor the juxtapositions. I loved the Jacket Sleeve...an old floppy disc housing. An inspired bit of reuse. Thank you, Jon. See you at Sampans.

Can I take a moment to tell you about our specials? I just did.....

Whew! I was thinking that I took one too many liberties. Be sure to record the event at Sampan's.

I just got back into town David, so I've just discovered your post here. Thank you so much and especially for posting the image of show I have to now create. It's going to be a quick turnaround but I think I can get things together in time. Thanks David, I'm printing one of these!

Yes, thanks xx. It's a topical tip, as I've just been spending nights downloading new fonts from the web for the first time. It's way too exciting! I mean, hours and hours and hours.

Great mail and blogpost! Thank you David, for posting this. I am glad you "approved". The envelope is a digital collage of vintage images. I did not know about Gorey, googled him and learned something new!

The font is called Mailart Rubberstamp and is by Keith Bates, http://www.keithbates.co.uk/fonts.html  I absolutely love it and it has been the one consistent thing that I have used on all mailart since I joined IUOMA.

just think of it like that old black magic....that you do so well.... 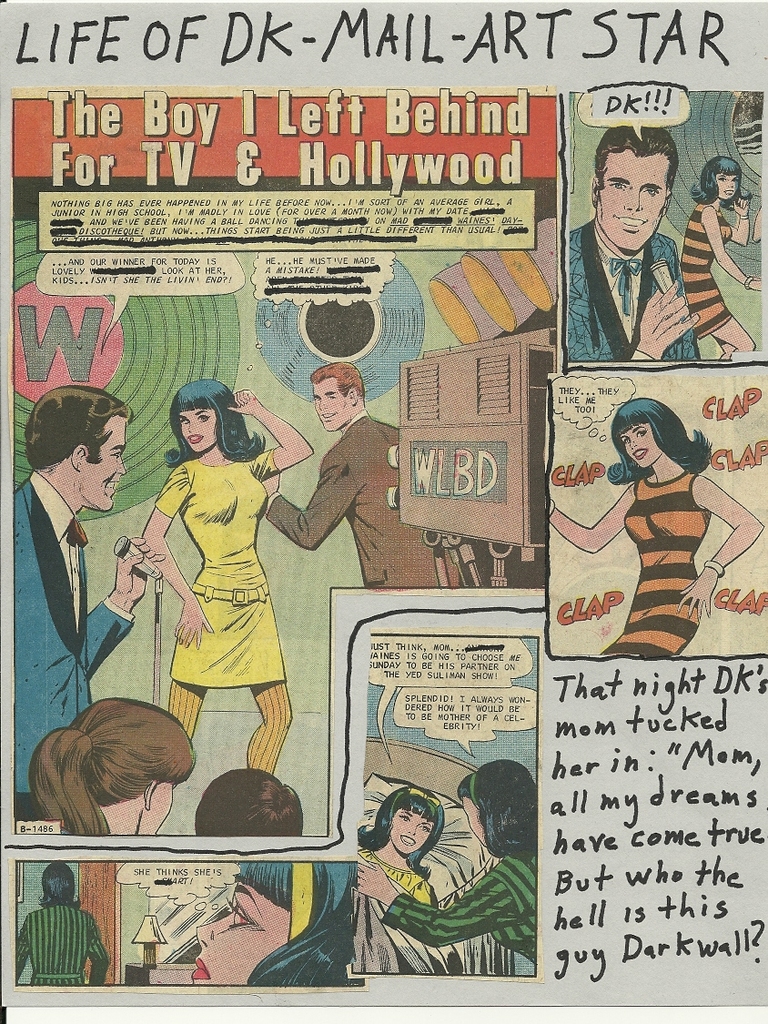 Yeah, the full totality of my strangeness...