And belated thank you for the snapshot of Mr Boots - the blue and bluest eye look wonderful! If that photo would have bern a postcard I would have bought one (as a far-from-boring-and-very-interesting-impressionist-art-postcard)! An old and rather tired postcard with no information provided. Thanks Di!

1. "what if you are not a donkey and love donkeys?" I can't possibly answer that here where children might be looking. (I might confess though to not being a Siamese cat and love Siamese cats. I would like to be reincarnated as a Siamese cat like Mr. Boots.) 2. "It seems that the escalator in front is swallowing people!.." I agree. It swallowed people up, and that was the end of them. Hence Brexit....

3. "btw how comes card nr 2 to hang above your desk when you think it boring? Did it hang with the picture in front or the message?" The card is dated 1977, and sent on one of my visits to Brussels to my family in Krimpen a/d Ijssel. I wasn't 'into' boring postcards then. I don't know of any works on that subject before Martin Parr came along at the end of the 1990's. Going back almost 45 years, I wonder if Mail Art as we know it here because of, and through IUOMA existed that long ago? 5But PLEASE let's not have a discussion about the history of Mail Art here!)

Berlaymont was full of asbestos which the EU discovered very late on. They closed it down, moved people to other (often temporary) buildings in Brussels, took all the asbestos out, refunished/refurbished it, and opened it up again. You probably saw it during this asbestos-clearing process. In the words of a Commission spokesman at the time, 'We are doing as best as we can'. (Sorry about that!)

Those holes in Bruxelles pic give a strange aura of having eyes. Had no idea that building's been around for such a long time. I saw it in person about 20 years ago and thought it was under construction. Maybe it was being refurbished.

Thank you for sharing, Val!

@ 2. It seems that the escalator in front is swallowing people!..

btw how comes card nr 2 to hang above your desk when you think it boring? Did it hang with the picture in front or the message? 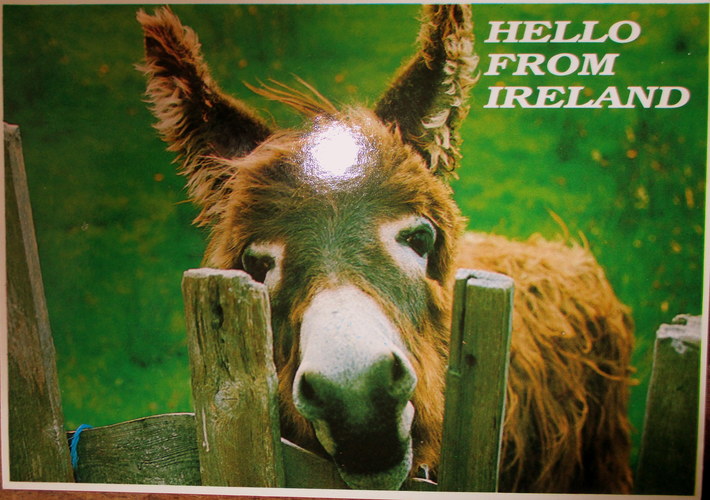 Well Hello to you too!

If you are a donky you may find this a very interesting postcard indeed.

And if you are Irish, you may not think that a donky really shows your country in it's best light (although there might be a secret message here)

2. From the HQ of the capital of the EU -- the Berlaymont building, Brussels/Bruxelles There are more EU civil servants (an oxymoron, if ever there was one) working in this building than in any of thenumerous other Commission buildings in Brussels. The Commissioners wisely work elsewhere. I spent many hours in the Berlaymont. For many years, this postcard was pinned on a notice-board above my desk.

'A one time, but never again visit' to Wigan sounds rather enticing to me. Must add it to my post-Covid list of things to do.

THE MOST BORING POSTCARD

"Worldwide interest was immediately sparked in 1992 when the Wiend Center in Wigan [England] announced that it would not only be holding an exhibition of the world's most boring postcards, but also unveiling the greatest work ever produced in this genre. Swamped with superlative exhibits from as far afield as Brazil, Mongolia and Tibet, the organisers said that early front-runners included a dimly lit view of a transport pontoon in Ulan Bator, and 'Gasworks, Leeds, viewed from Adlington Street Toilets'.

"We think there is something for everyone", said Brian Corrigan, the Marketing Officer of Wigan Council.

The winning entry was a '..staggeringly boring trafic interchange in Redditch'. It was sent in by Liz McParlin of Aberystwyth who won a "Luxury weekend in Wigan".

Gil Swift crowned his career as Director of Leisure Services by opening this exhibition, and then retired at the top."

(If you have ever been to Wigan -- which I have once, but never again, thankyou very much -- you will realise that there is something oxymoronic about a "Luxury weekend" .."in Wigan".)

Anyone wanna exchange boring pcs? send me one and I will do the same, with some decoration on the back.