A PEAK INTO "SECOND STOREY BOUTIQUE"

Sometimes I feel like I dropped off the side of the Earth.

I didn't, I just opened a store. To prove this, I give you photos!

Check out that beautiful sign, backlit and made out of CARDBOARD. Impressive.

A little slice of MY… 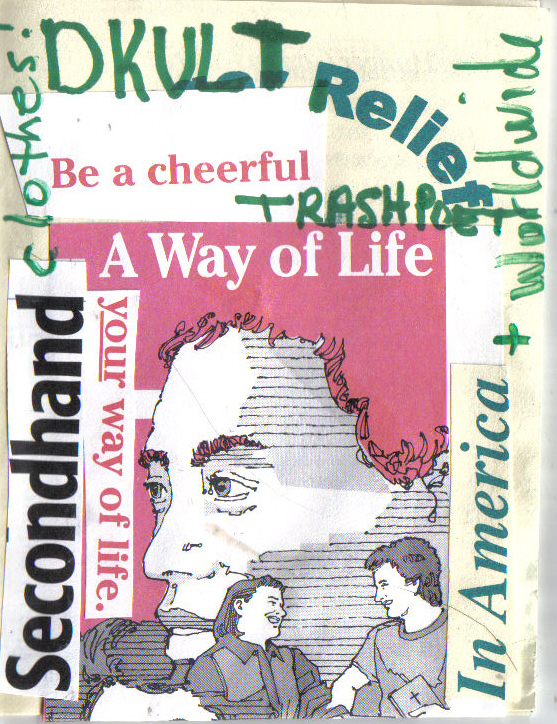 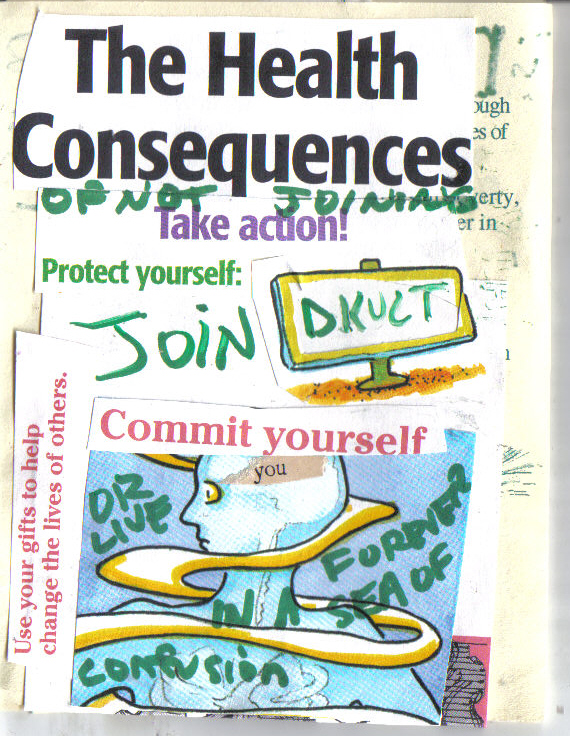 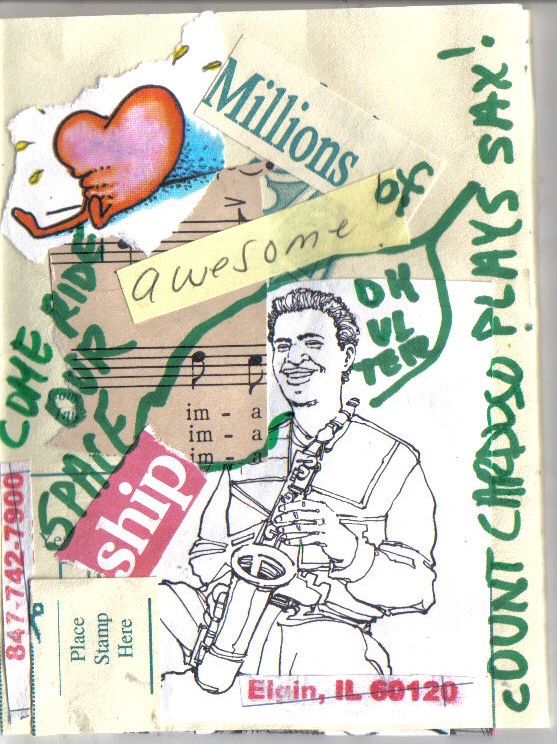 THIS VIDEO ILLUSTRATES HOW I WAS AFFECTED BY ANESTHETIC AFTER EACH OF MY LAST FOUR SKIN CANCER SURGERIES. PS. I'M OK NOW...

Mail Art Call / Convocatoria de Arte Correo
Descripción
From 10 x 15 cm up to A4
Deadline: October 30, 2012
Received works will be presented in this site, and in "4 cats art space" for the celebrations of MailArt Day in Argentina, on December 5, 2012 in Buenos Aires.
Without a jury, no refund.
Edit a graphic record for the participants, which will be mailed during… Continue

Dani Street : He was plotting his revenge

I must admit it, this one is over my head.  Oh wait maybe that's the anwser?  "Bananas over moustache mailbox."  Yes, that must be it!  Dani, please help, we are all dying to know. 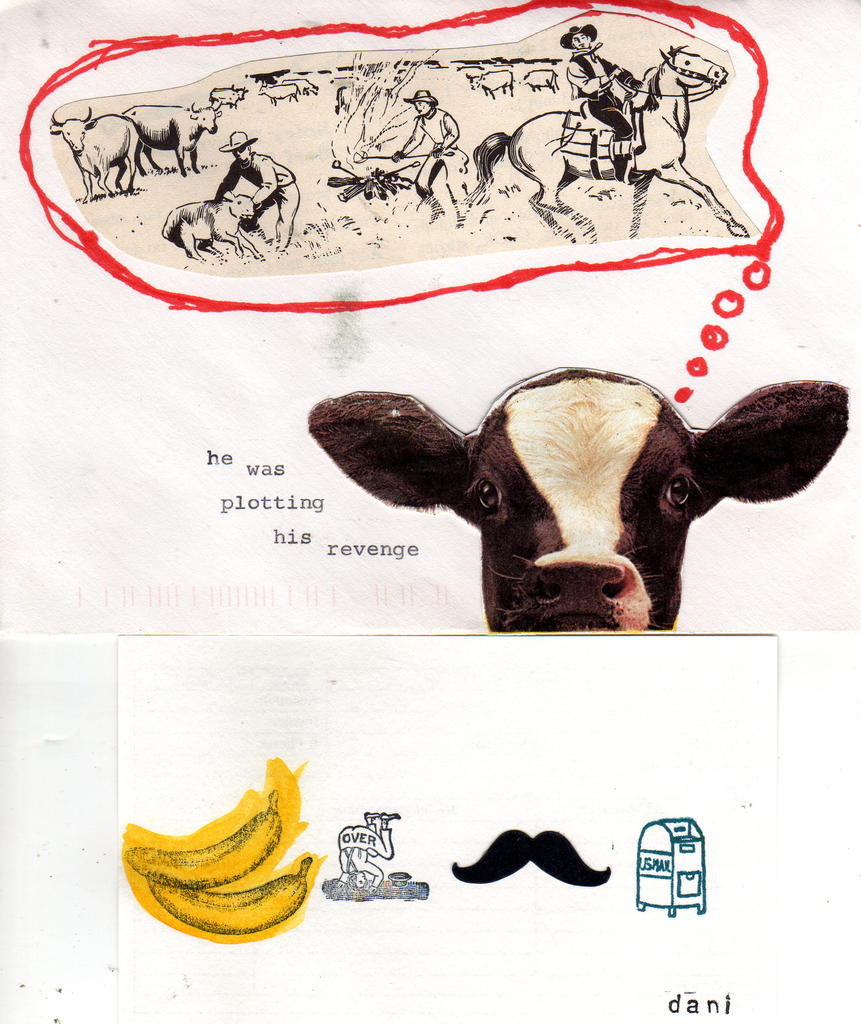 Thank you Dani, and keep that moustache flying

What you see is what you get.  This had me laughing on the floor.  A drawing does say a thousand words ... or messages.  Arrives as is without an envelope.  The Postman now wants Vizma's telephone number! 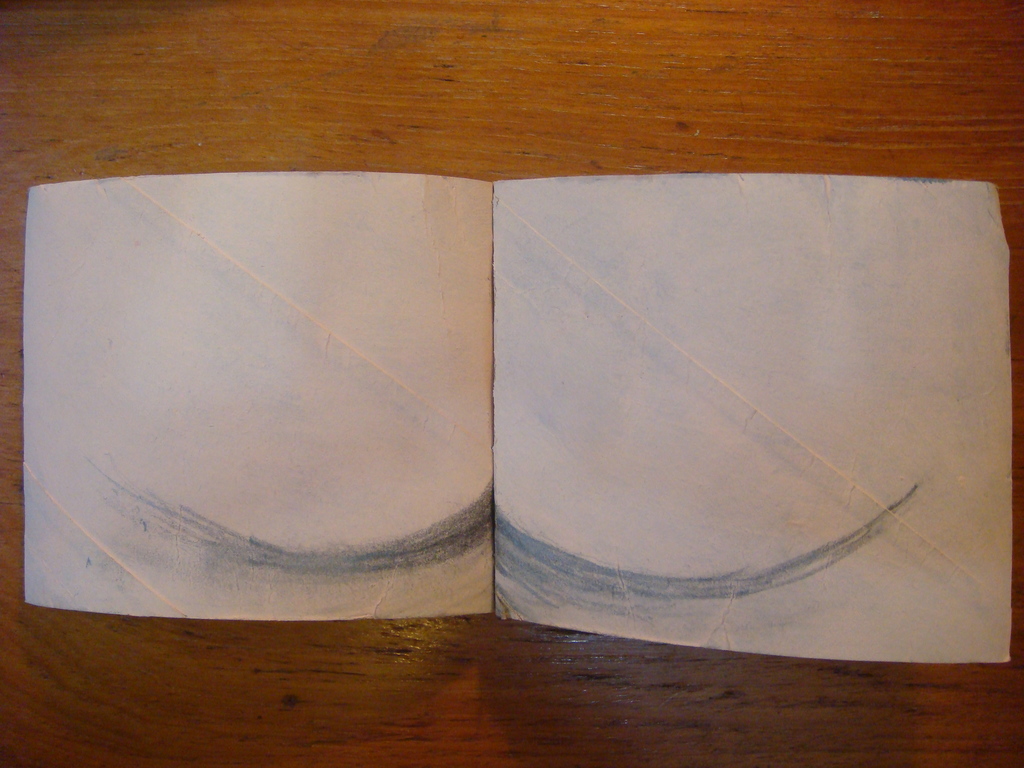 This amazing drawing arrived in A3 size, but here you only have a few details.  The part I enjoyed the most.  The Silo, the outhouse, the cornfield (now if they could only talk), the potato planter, and the chicken coop. (Where my rock band practised for endless hours.)  What wonderful memories this brought back.  Thank you Mr. Jones… 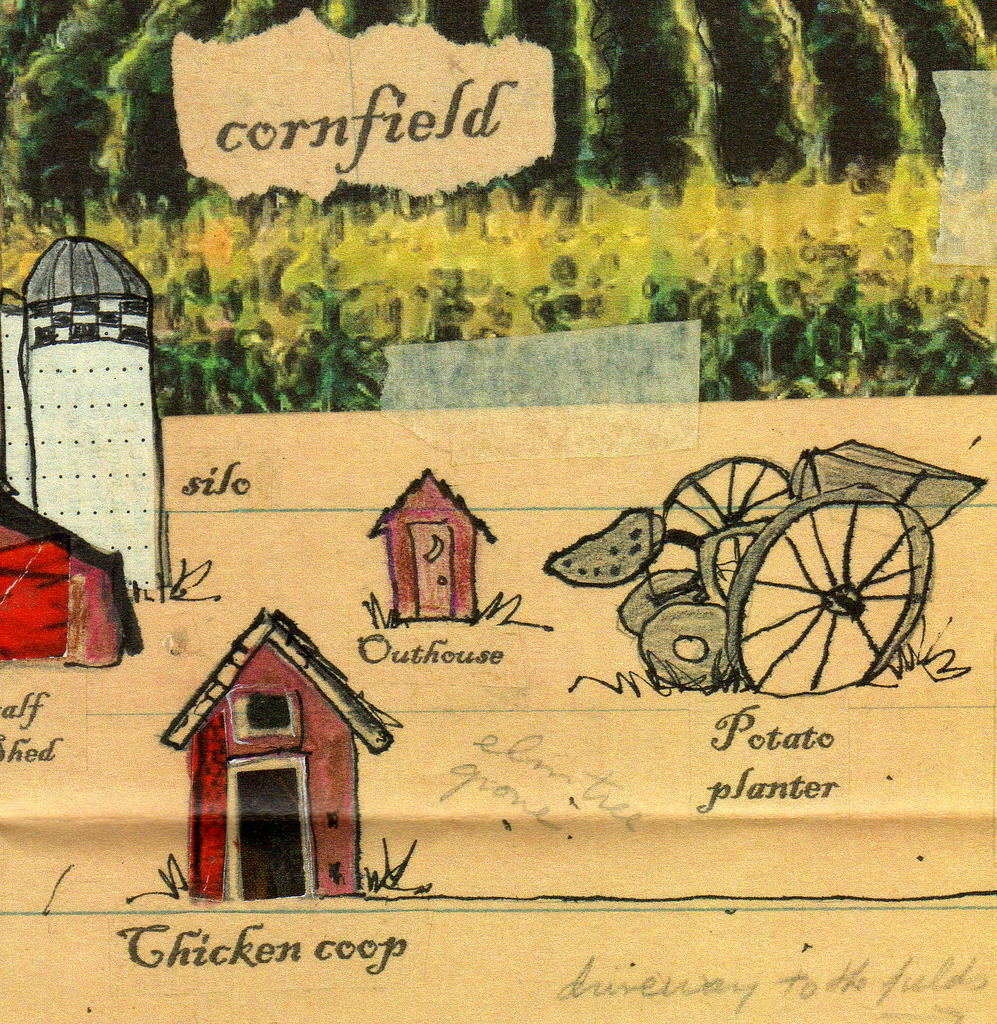 Thank you, dear friends, my little mother is happy !

She decided to respond to each of… Dear friend Cleo, Claire Dinsmore, sent this wonderful package - you could easily rummage for hours to find all kind of precious paper thingies. I do love it!!… The response to my mail art exhibit at Gallery51, North Adams in MA, which opened Thursday evening at Down Street Art this week, was remarkable. Viewers were curiously examining my work "up close and personal". It seemed they were reading my collage /mixed media visual iconography as if deciphering poetry. They examined post marks  and any verbal messages they could read in my handwriting or through my choice of collage words. I received so much feedback and so many questions about this… So many great things. Thank you so much!!! It'll be ready for shipment on the 1st or 2nd of October. If anyone wants a copy, let me know! This one has excerpts of my personal blog on it.

I try to publish one a month, so let me know if you're interested in November's zine, too. I do not yet have a theme for it, but let me know!

That (little) bit extra from Cheryl: the cut up, the context and the poem! 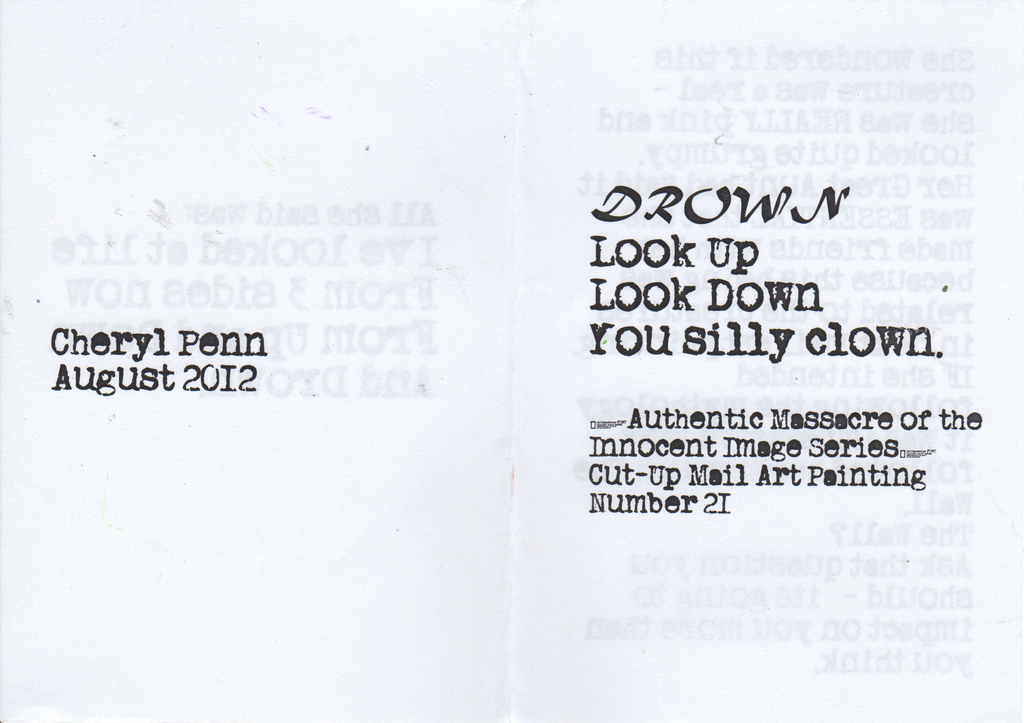 So much in an envelope from… 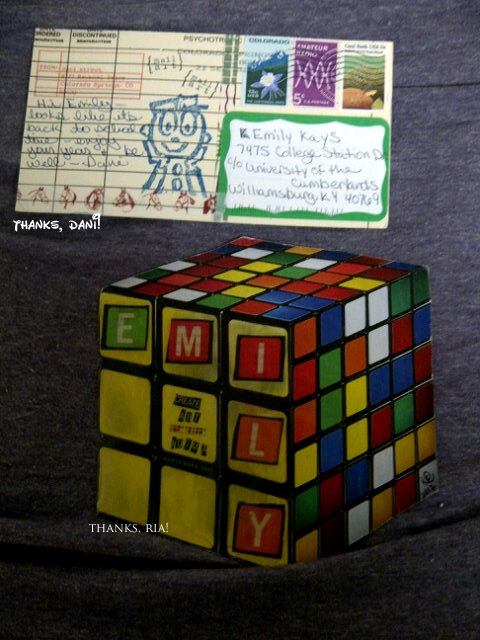 These aren't all from… 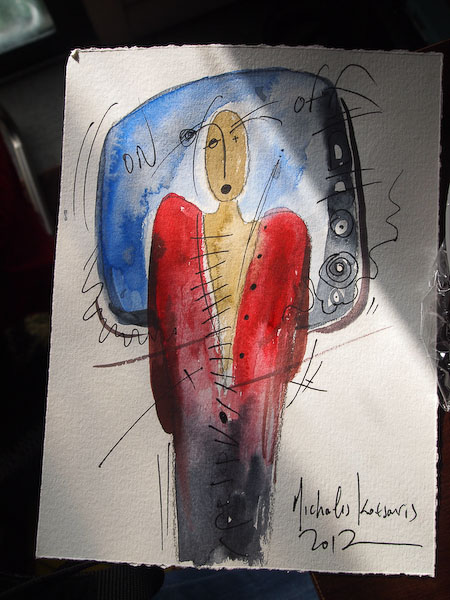 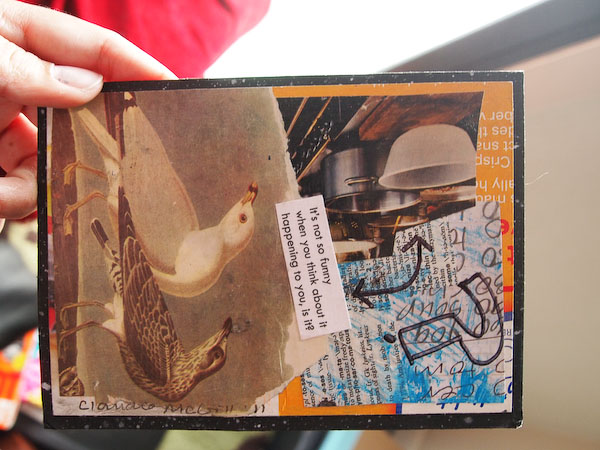 Thank you, friends. I've been later than usual to reply to mailart because I was consumed by knitting the perfect baby sweater (for a stranger). That project is finally over and my dining room table is an…

Carina sent me a verrry nice mini book, hand bound and all, here it is with some favorite pages:… 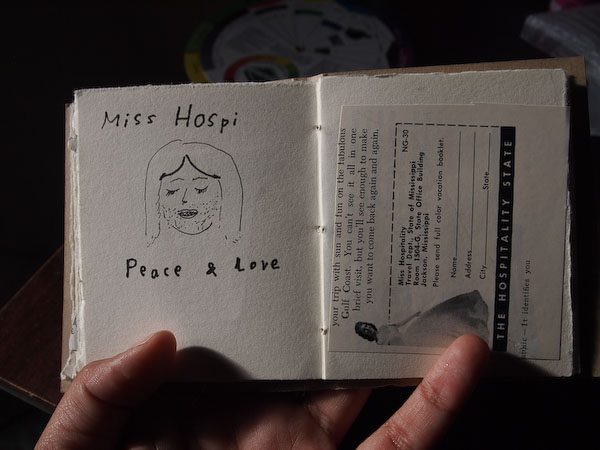