From the Haptic Werewolf in Hamburg came this famous fellow, 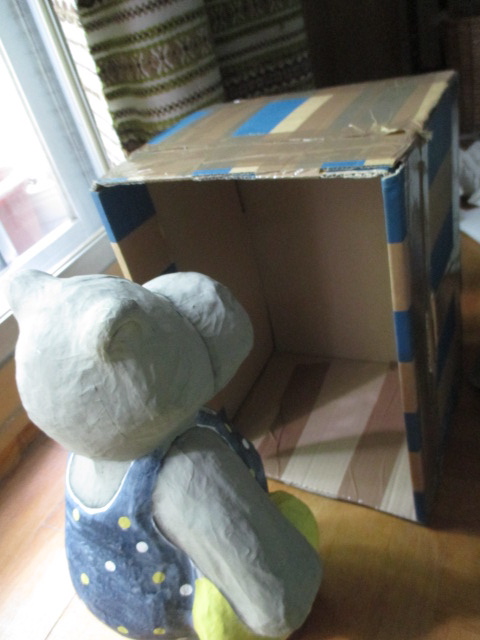 (in a big box) and he was greeted by his relatives: 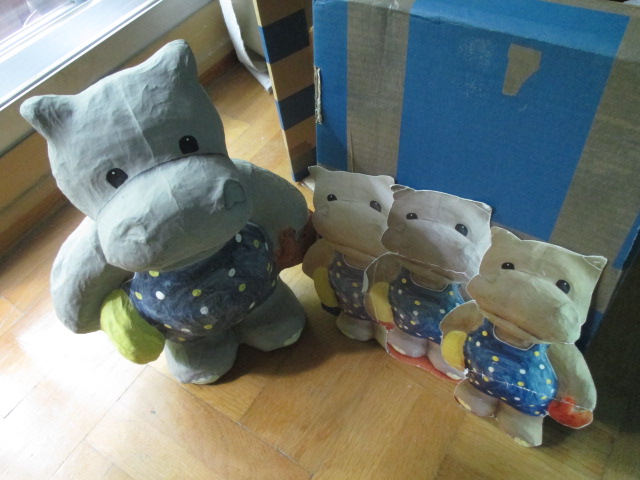 and friends: Green Froggy of Japan, 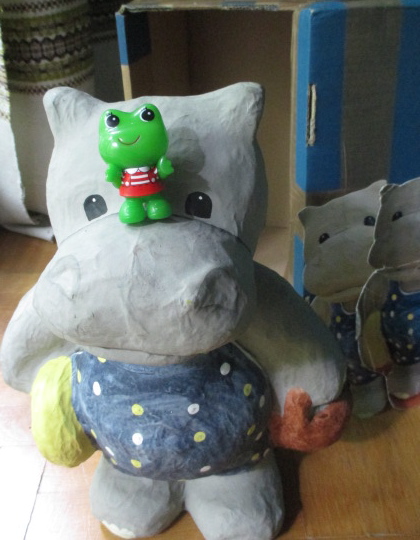 the Peeps of Cascadia ArtPost, and many others: and he is really liking his new home, and the summer weather of Greece.

No need for a woolen knit cap, now he needs a sun hat! 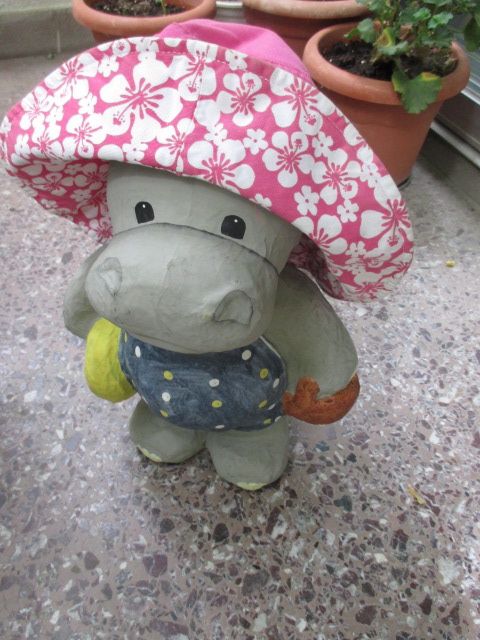 This is the REAL Edmund Hippo, about 40 cm high and 30 cm wide, made

of papier mache and wearing a BLUE  swim suit , carrying a yellow swim-tube

and a basket for a day at the beach :-) He was first discovered by Haptic Erni

in a shop window in Hamburg, Germany. So on that day in January, 2014, 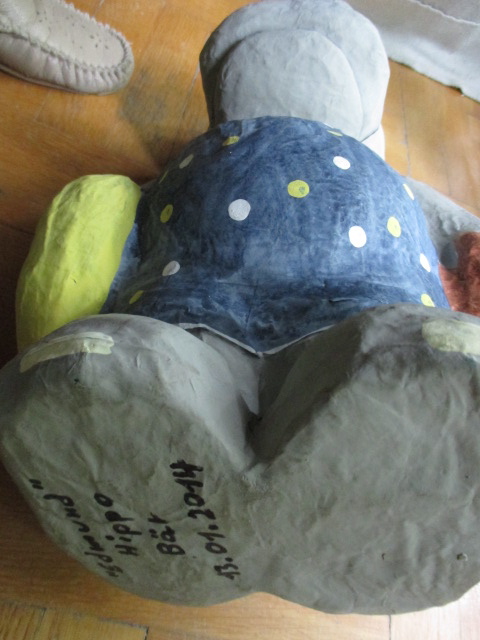 world in the mail, something like the "Flat Stanley" project. Those who received

an "Edmund" documented his adventures in the Netherlands, in Australia, in

France, in Korea, a mini-Edmund is in Virginia in the USA, and a few in Greece, too. 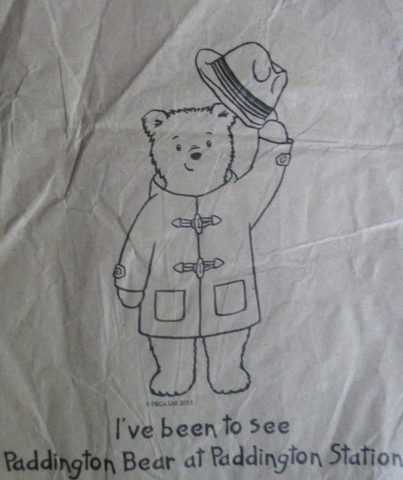 and now the REAL Edmund Hippo has arrived in Thessaloniki, Greece...not too unlike Who shall care for this dear fellow? Shall he stay in Greece, or would he be welcome elsewhere?

The instructions on the package as he arrived said: Many thanks to dear Erni, who could not have parted with Edmund, easily,

but did send him on his way to have new adventures like Paddington Bear.

He will be well taken care of here in Greece, until someone else might want

to give him hospitality and a new home full of love and new experiences! 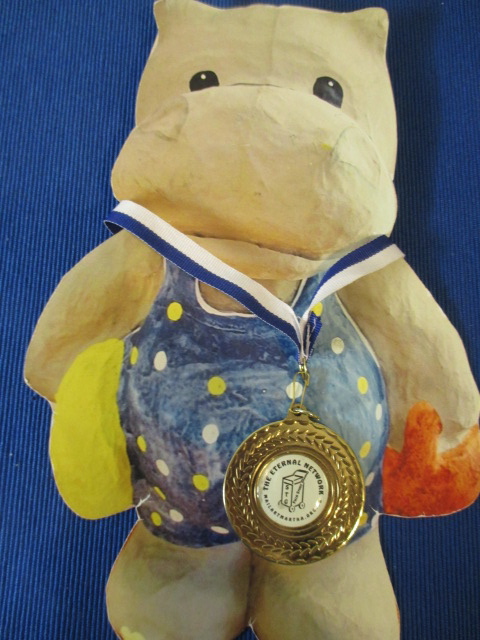 he may give it to REAL Edmund, that might cheer him  up.

That would be nice to get a sunshine at the beach!

He does look sad, doesn't he?

Well, soon we shall be going out to the seaside, that will cheer him up! Edmund is spending time at the studio, looking at all the ol' mail art,

and he found a few Haptic Werewolf things, He does look sad, poor thing, but I expect your loving care and the Greek sun will soon cheer him up

I still keep in touch with Erni....so glad Edmund has found a good home....

He noticed the Hamburg mug, got a little homesick and missing Erni. 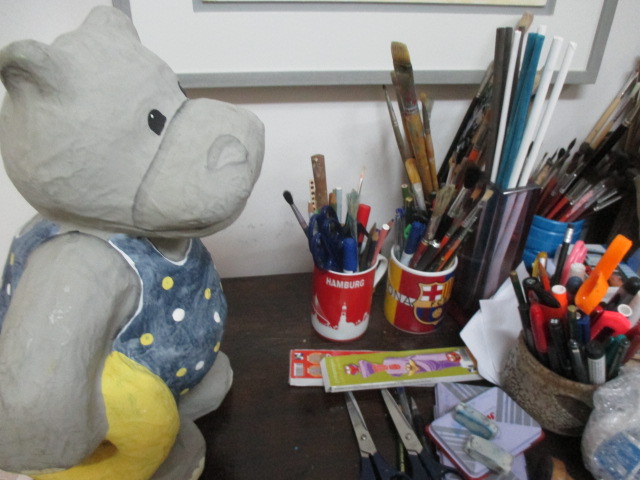 Edmund likes to receive mail art, and he was at the studio checking out

some that arrived recently to MomKat :-) 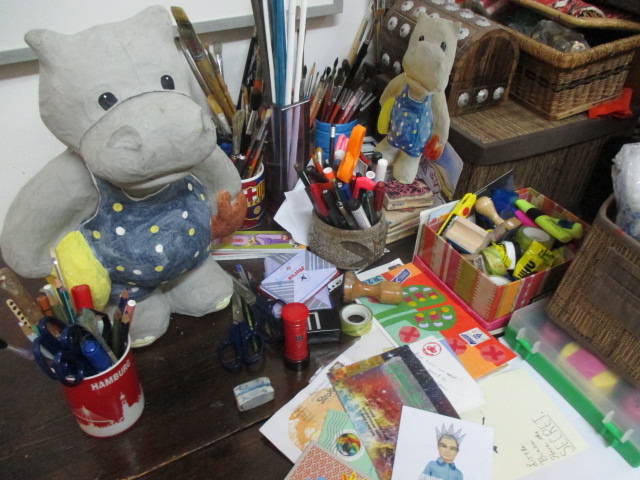 I am glad to see green froggy with Edmund. Thanks. :)

Wow, so the Real Edmund now can enjoy Real Greek Sand on the beach and taste Real Greek Food!  Good choice of Erni to let Edmund travel to the Mediterranean!

(But my advice is better not let him swim in the Real Sea, as that might a bit dangerous).

I was wondering: if Edmund is receiving and sending mail art (I suppose he will, at least to his befriended Edmunds overweas and to Erni), then maybe he should become an IUOMA member, too?