May 20, 2011 - Fluxus words are in the air these days. Mail-artists are receiving interesting word creations from Ruud Janssen on beautiful hand-painted envelopes. I am thrilled to have received SPOLICE.

For several months, I have been writing about Fluxus words as a concept (click the flux-us tag at the bottom of this blog to find previous posts on this subject). SPOLICE has a personal meaning for me. Before I explain it, here is the note Ruud sent with SPOLICE: 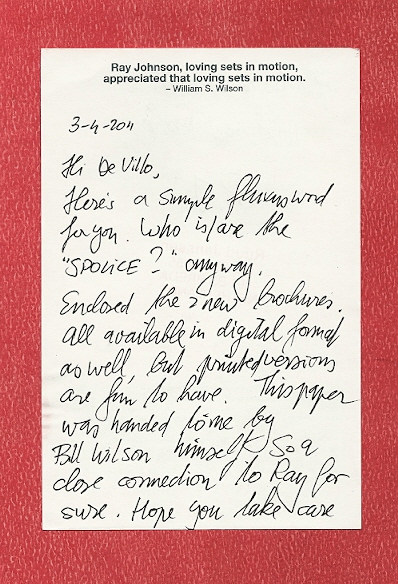 A a great mail-art message - Ruud included some material for Ray Johnson fans like me. He mentions the mail-art generations enclosures. Those are the subject of this blog Part 2, which I will post tomorrow. Here's the reverse side of the note, a keeper that has earned a special place in the archives: 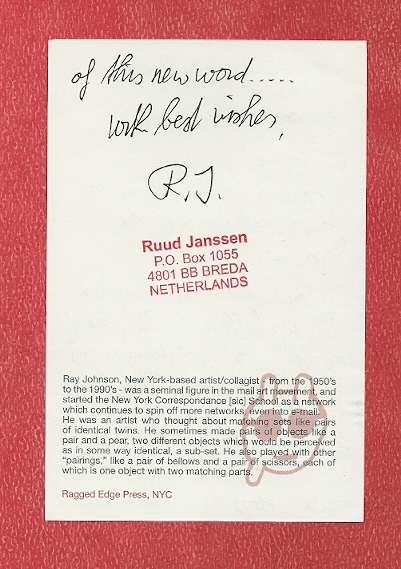 Ruud asks, "Who is/are the SPOLICE?" I am confident about an answer. I am sure the SPOLICE are the Sand Police - shadowy fictional characters who are part of another mail-art concept in the air these days: Sand Poetry or Sandpo.

A fictional arts movement has been created around the mail-artists working in Sandpo. This is part of the concept. As a result, stamps, manifestos, position papers, and letters are part of the mail-art being produced as part of Sandpo.  While it might seem exclusive, of course anyone is welcome to participate.

I see the concept as a parody, exploration, and questioning of the idea of cultural movements. It is not surprising, then, that there would be SPOLICE - similar to Orwell's Thought Police - always present to monitor and approve or disapprove of artistic expression. The SPOLICE should not be viewed as positive but as a grim reality. Artists everywhere in the world live daily with constraints and threats to their freedom.

The SPOLICE also surely represent the wacky world of conspiracy theories, political intrigues, and disinformation that intersects with our lives in the strangest of places. Like many Fluxus words, the SPOLICE represent indeterminacy: We can ultimately neither confirm nor deny their existence with complete confidence, nor can we say with complete certainty who they are or what they represent - other than it is (and should always be considered) a bit of fun.

The concept behind Fluxus Words is that people give them meaning in the world. SPOLICE is a word I can integrate into mail-art projects and continue to broaden and deepen its meaning. Many thanks to Ruud Janssen for this very thoughtful mail-art!

Great Sandpo, Kat. Thanks again for being so kind about me hijacking your stamps - both Fluxus Word and Sandpo. Here's a Sandpo piece by Kat for newbies. SPOlice? me thinks they are hiding "underground" out at Halkidiki...I'll check this weekend ;-)

Comment by De Villo Sloan on May 20, 2011 at 12:28pm
Thanks Cheryl, interesting that mail-art friends have given you the nickname Big Sister. I think DW just wanted to show an example of Sandpo mail-art. Your expulsion was overblown. 1984 is a good subtext. You see it in music a lot too. I think Cheap Trick has "Dream Police." I'm pretty sure Radiohead has "Karma Police" - like that one a lot. Wake up and smell the coffee?

Comment by cheryl penn on May 20, 2011 at 12:21pm
FAB blog DVS - and yip, your ascribed meaning - it CERTAINLY feels right in the current sand storms.  I said yesterday  Big Brother is Watching, and here we have your reference to the inability to confirm or deny - YIP, police matters for sure.  The other - I'm thinking!!!! But apology accepted - how can I not bearing in mind its OFFICIAL nature!  BUT THEN!!!! The bottom  bit - Nought Bro!!!!