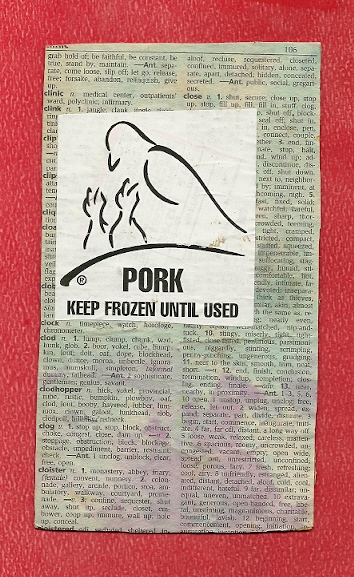 May 16, 2011 - What do you do after you've become a mail-art legend? Diane Keys (DK) has pioneered roadkill mail-art, re-birthed an obscure practice called Trashpo, invented Junk Mail-art, and reigns as Minister of Propaganda for the Sandpo Movement, among other triumphs. What's next? Apparently you become a poet, a visual poet, and brave the ether.

I think this recent installment Diane sent (things must be better because there was no postage due this time) is probably meant to be vispo. In her characteristic eccletic fashion, this also seems to be part of her Pork Series, although the other pieces I've seen in the series are not as text-laden. She has done a lot of pieces using dictionary or textbook pages. I do like the colorful but subtle stains on the paper. I think it might be Easter egg dye. Here is the reverse side: 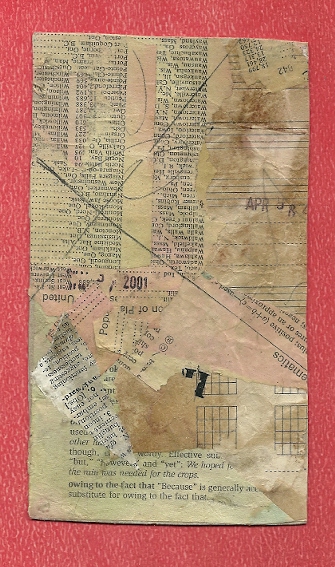 In a previous blog about her work, I asked (jokingly) if Minister DK was making vispo or Alpo. It's not hogwash either. It seems fairly clear to me this is indeed vispo and not simply collage. The jarring contrasts in her Trashpo are fading away in some of this recent work. I've already used the word subtle here once already, and I use it again.

I still disagree with Marie Wintzer (Japan) about DK's mail-art. I do not think her Trashpo = "sophisticated trash." I don't believe those pieces were sophisticated, at least in the way they were constructed and the subsequent reaction. The pork pieces above, I think, reveal a refined aesthetic sense. They are meditative and harmonious. You can spend time with them because they have depth and keep yielding more discoveries. They are more formally constructed, perhaps because DK did not want to lose the anchor of printed text conventions. I think the organic qualities, something that DK does instinctively, are present. I do not believe DK moving toward more formal composition would be a positive thing for her or any of us who receive her art. That's just my opinion.

DK sent this mail-art in a recycled envelope, notable for someone else's FluXus stamp that appears halved. The envelope contained these... almost fetish items... or like things you'd find woven into a bird's nest. Some of the paper is so moldy it triggered my spring allergies. That's OK, something was going to. This scan reminds of a photo plate you might see in an archaeological field report documenting things found in a prehistoric trash heap. The middle-right piece looks like laminated chewing gum wrappers or something: 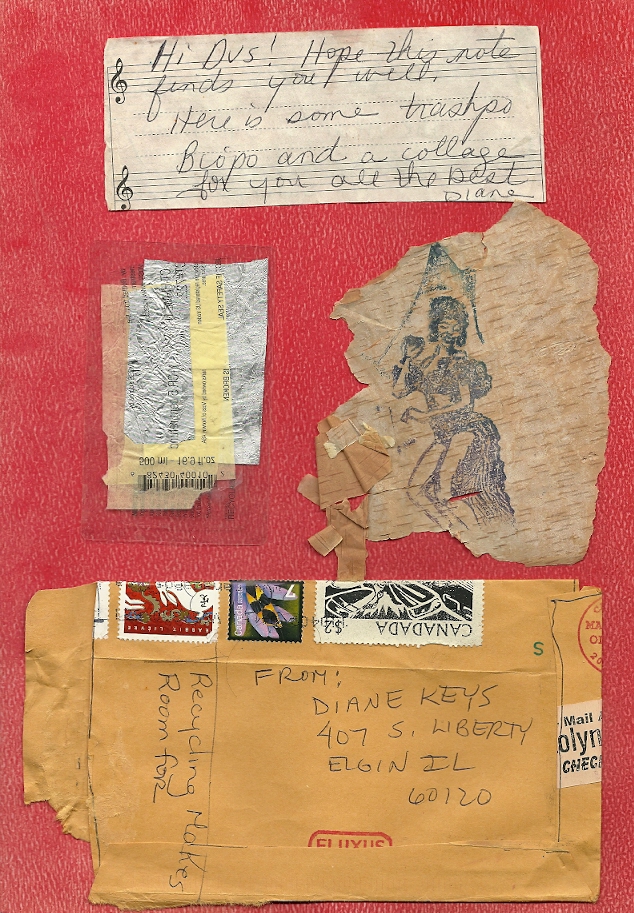 Biopoetry is something that needs exploring. I'm not sure where the biopo (bi-po(lar)?) is here. The mold? I think DK might have started a blog, but I haven't looked yet. Many thanks, Diane!

Comment by De Villo Sloan on May 18, 2011 at 1:31am
Where have you bin, Marie? Let the record show you were misquoted. Also - DK does not have a blog. She answered that elsewhere.