Sorry David....it just flew out of my fingers like a kitten with sharp claws. Anyway, Dr. Beaverton is a pivotal role. And he gets most of the good lines. Okay,  sorry will not happen again. I'm determined to catch up here. I put these two works on the scanner without any regard for their blueness, Scout's Honor, and when I returned later to work on it the symmetry seemed undeniable and so…The Joint Show...and then I got carried away with the theme. And I started ridin' a meme. And then I went back in time for a leitmotif. (And I hope you have the bongo music going for this riff because it just won't make sense without it) . And....at this point he began to mumble incoherently. People coughed and looked away. Thank you, David and Katerina. 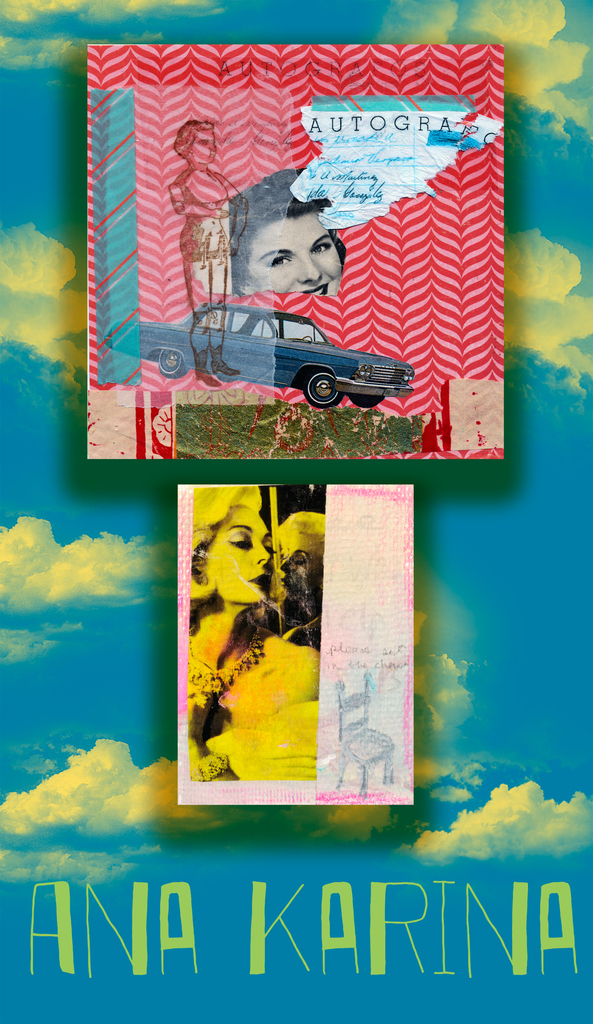 Ana Karina has probably sent me more than just these two but at press time I could only find these two very cool collages made with materials just found around the home. I love the Yellow Girl who looks like a younger (as in 60s not 90s) (as in years not in decades) (Jesus!) picture of Carmen Dell'Orefice. As I'm writing this I notice I missed some very faded writing. I can't quite make it out but I think it says "We / pwine / kelp" (Okay, big digression here...ride with me on this one...) In the movie version the words are actually "a cry for help" or something like that. The doofus who gets the card misses the covert message entirely and puts it on his refrigerator until....he has an enormous party and he finds himself across from ...let's just go with Ellen Page in front of the fridge. She, in a sort of cosmic woozyboozy way, deciphers the true message and we're off...

We return you now to your only slightly odd programming. Thank you, Ana...O almost forgot about the chair...beneath the illegible type are the words: "Please sit in the chair." But on the other side of the card it says: "Think of the chair for God's Sake!" (Words in italic are not in the original manuscript) At any rate we CAN work this into the script somehow. That's what writers are for, for God's Sake! 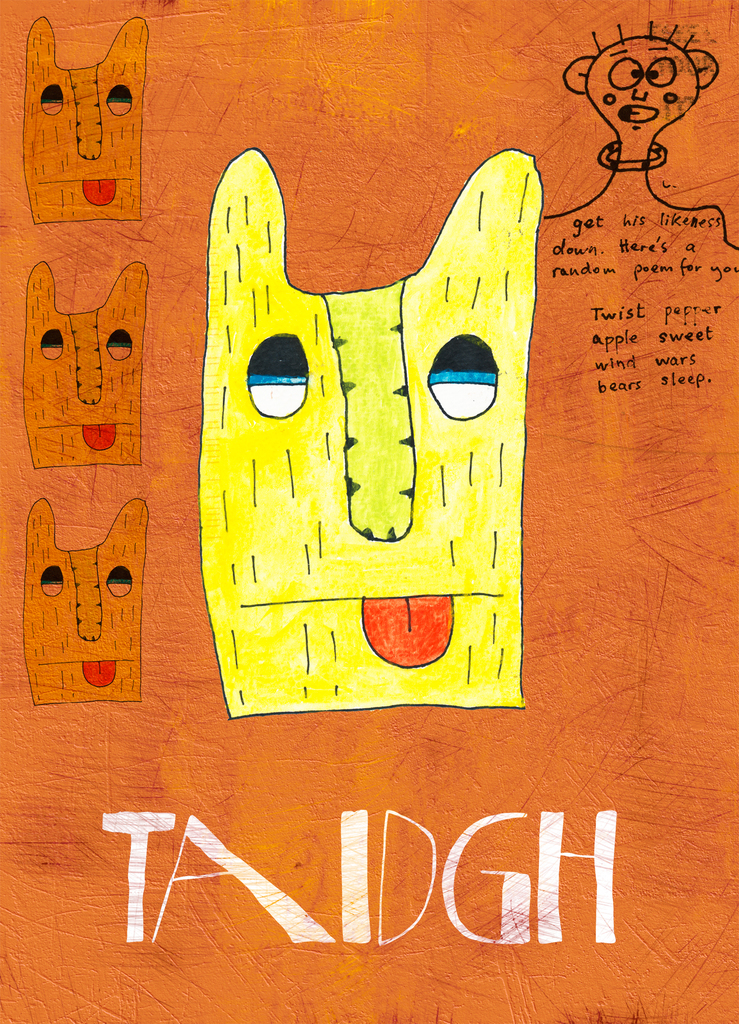 Taidgh sent me this creature whose nose and tail are combined in one easy to use appendage. It comes in handy balloon, sock puppet and wall paper motifs. Also available in the Spoken Word section of your Record Store. Shut up and say Thank You, Taidgh. Thank you, Taidgh. 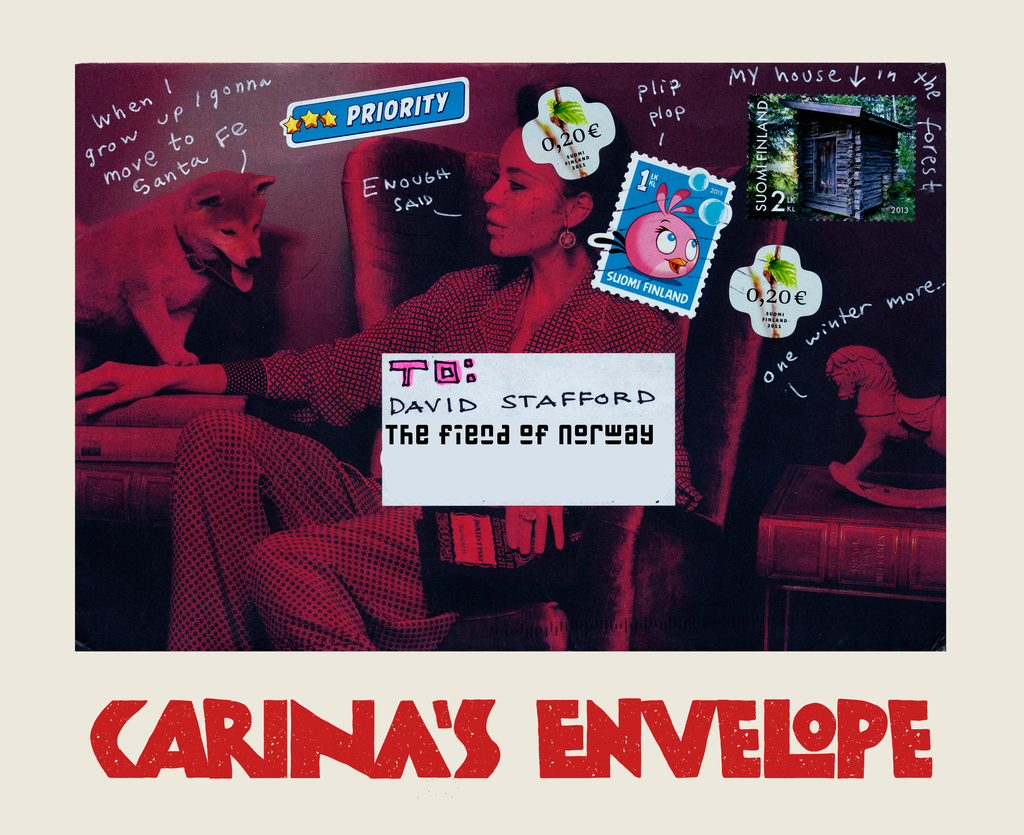 And finally here is Carina's Envelope (or one of them). The movie version is also called Carina's Envelope and I don't have to write this one because I can see every one of you visualizing this movie.....Kristin Scott Thomas fer shure...and there will be tears. O Gawd, how rude to leave Carina waiting at the curb. I liked this because of the dog's line, "When I grow up I'm going to move to Santa Fe." Honey, they ain't no grown ups in Santa Fe. Plenty of old people with sacks filled with treasure. Lots of middle class folk peering through their floorboards at the abyss. And the poor smiling up from the abyss but no grown ups. They were banned in the 80s. (Okay, picture The Lost Horizon set in Colorado and directed by David Cronenberg). These two are some of my Carina faves. She described the bottom one as a "just a postcard." But I love the little fluxus guy happily babbling while the creatures look right at the lens. I don't actually know this guy but now I know what he looks like. Every sleepy lie must say goodbye. Suddenly the meaning is clear. Sorta. Thank you, Carina. I hope you will all indulge me in my embarrassing effluencies (Just made that word up).

I get carried away and there's only that guy in the suit to stop me. You know that drill. (Maybe you don't).

This only happens when I combine medications. Scout's honor. Out Damn Caffeine, Out I say!

Lol. Thank you David! Wonderful blog and artwork. Your title is hilarious: Carina's Envelope. Love it! I think I have to keep me to somekind of paper cut out animations... IF I ever get into the movie business :)

You're welcome, Katerina. Got a bit carried away. I blame the Polar Vortex and the Republicans.

thanks for the blog and thanks for sharing all the other mail art...wow!