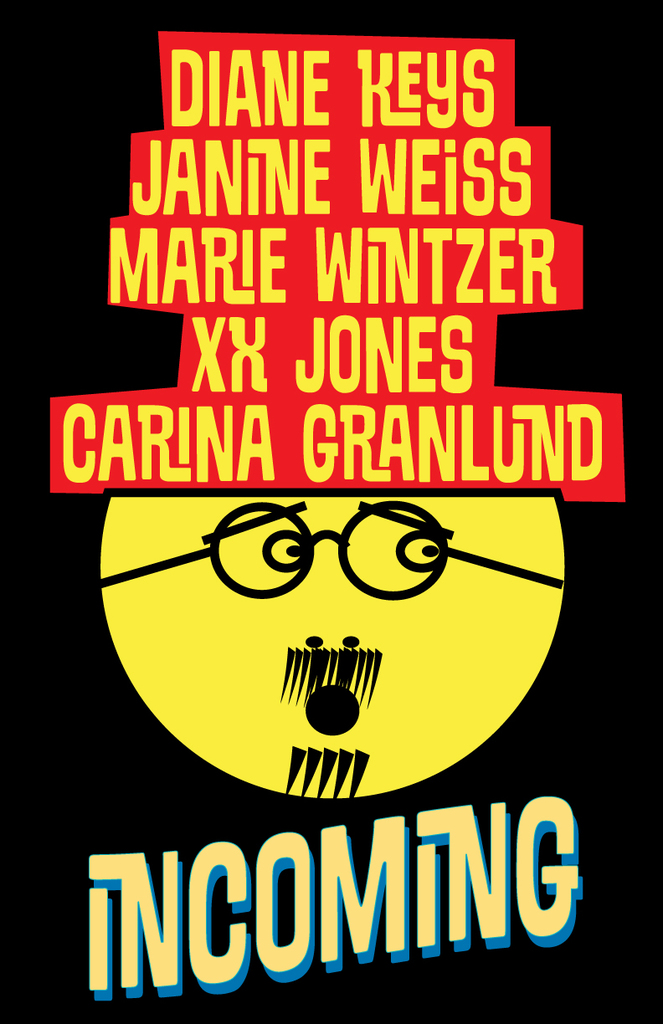 Okay, let me say at the outset that I've received a lot more stuff since April which is not included here because it's basically just trashy crap. It's a joke, people! Oh my, I could almost feel the hackles rising around the world like the ridge on a Rhodesian Ridgeback. No, the reason it's not here is that  time runs out. But I will blog them and soon. As the saying goes: If you don't make time to blog they'll come and shoot you like a dog. Let us begin... Diane and her son collaborated on this card in which their obsessions come to the fore rather starkly. On the one hand, Diane is ever on the lookout for meanings in movements of Mammon, the invisible signs and portents of shopping lists, supermarket flyers, price tags while her son, rather forthrightly, worships at the temple of Sloth (see card above). Having spent a good deal of my time in the back pew of that temple I can relate. And while Diane claims this is priceless, there are at least seven prices here by my count. Thank you, Diane. You will receive a personally autographed copy of my new book, "Sympathy for the Shovel." Janine has moved and is now, once again, fully functioning again as a mail artist. In fact, I got into trouble because Janine sent me two pieces and heard not a peep from me. This is not uncommon, Janine. Je n'ai aucune excuse. Je suis juste une mauvaise personne. Be that as it may, here is piece number one, a stitched witch with hieroglyphs. It's from the Sutton Collection as you probably had already divined. Freely translated the glyphs read: "I don't understand you, David. Why are always speaking English I don't understand." (Je ne comprends pas que vous, David. Pourquoi toujours parler anglais, je ne comprends pas.) Then she trails off and talks about putting the Curse of Anubis on me. (Elle a ensuite hors sentiers et nous parle de la malédiction d'Anubis sur moi.) (I wonder how the trolls at Freetranslation.com mangled that one....) Merci, Janine. It's a lovely piece de resistance. I'm sending you something shortly. 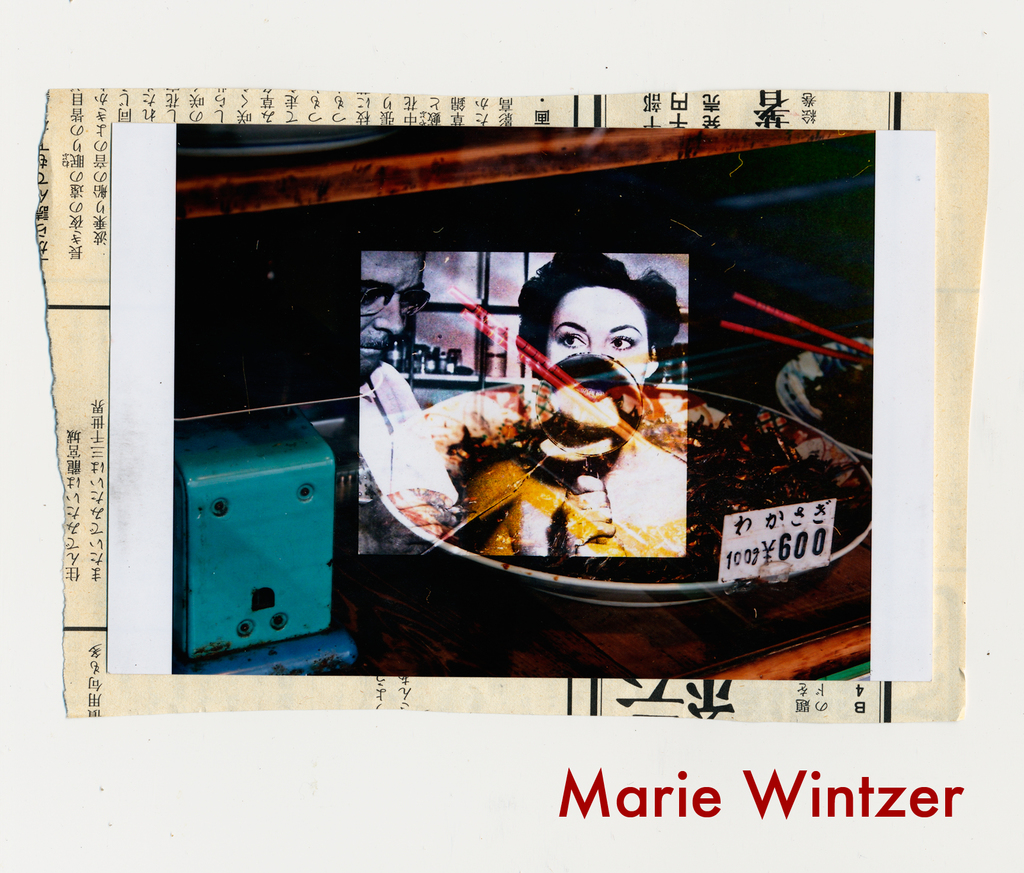 The pages of the boekie are filled with Marie's photographic mash ups. In this picture a woman appears to be holding up a magnifying glass resulting in disturbing distortions. On the back side this is Marie's poem (below) about the sense of taste and presumably there's a connection here between the voices in the poem and the woman scouring her memory for a taste of something forgotten. The interlocutor in the poem just can't seem to get it right. 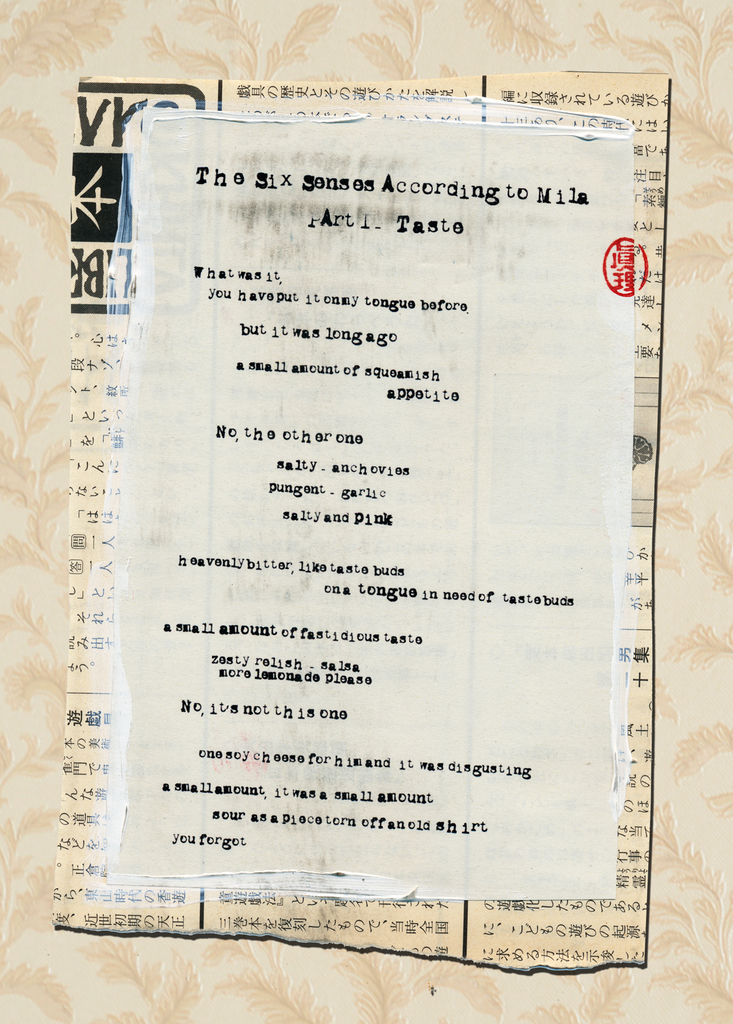 XX Jones marks the spot with a wonderful found art map whose inland waterways remind me of bones. Treasure map or is the map the treasure? Also included was XX low brow art print. Hey, she said it, not me. Thank you, XX. I'm all about low brow, believe me. Finally, way, way back in early April, Carina sent me one of her painted postcards of which she is justly renowned. In this one, a pleasant outing is spoiled by a sudden downpour of purple rain. (Apparently what we didn't know at the time is that Prince saw that climate change thing coming way back in 1984). 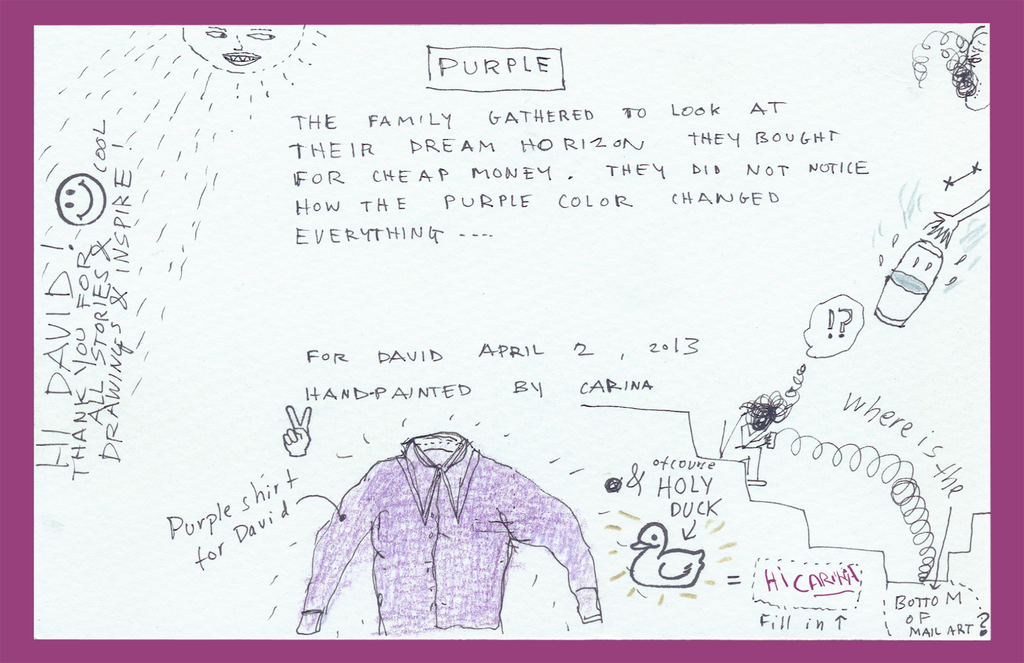 On the back, a purple shirt for me! And the Holy Duck! As well as the mail artist's frequent question of the gods, "Where is the bottom of mail art?" I'm working on that one, Carina. Thank you, Carina and all artists who sent me things which I've not yet blogged including Vizma, Jon, Janine (Encore une fois) and XX (Erneut), Tic Tac and Katerina. Thank you, I will get to your stuff in the fullness of time. Barring unforseen difficulties. Like the purple rain of Acme safes falling softly on distant shores. (Janine, you're on your own with that one).

oh wow look at all this tasty mailart

Got it (finally). The whole series appears in installments at "Marie's Mailbox." Other people have received sections. David, if you haven't visited MM for a while you should because several pieces of yours appeared in the last month with some interesting comments.

No, I meant the Mila series commentary.

Hi David, I meant the sparkling prose in the blog.

a truly priceless artifact...dvs, point me toward the commentary if you would...

Wonderful, wonderful art here and the presentation is spectacular!

David, I really enjoyed your commentary. Clearly you hired a new writer, and it shows. I said: "David, keep the sock but lose the writer."

Great to see a section from Marie Wintzer's "Mila" series. This has actually gotten a good bit of attention and discussion in the blog realm.

It just so happens I have a shopping list written by Marie and her sister when they were 8-10, guaranteed authentic and documented, I will part with this for $10,000 but will consider other offers:

obviously Sloth is not one of your favorite sins, as this blog took a lot of work. Great and entertaining commentary as we have come to expect from you. The Church of Sloth is right next to the Church of the Poisoned Mind

Outstanding haul you have here, David, and blogged outstandingly too.