February 1, 2014 - Moan Lisa is an extraordinarily prolific mail-artist who coordinates an astonishing number of calls and projects. The ongoing Fake Andy Warhol call seems especially popular or maybe it seems that way to me because I like it so much. Displayed here are selections from a sheaf of fake Warhols Moan Lisa made and sent me. Included are portraits of contemporary mail-artists you might recognize as well as revered avant artists not associated with mail-art. I can identity most of the individuals, but not all of them. So I leave the identification to you.

MinXus-Lynxus issued a statement of unconditional support for Moan Lisa. This was in response to Moan's censorship issues with Google and then, later, Facebook; but Moan also has many fans connected with MinXus. Thus, Moan Lisa was issued an official MinXus stamp.

Without further commentary, here are the fake Warhols: 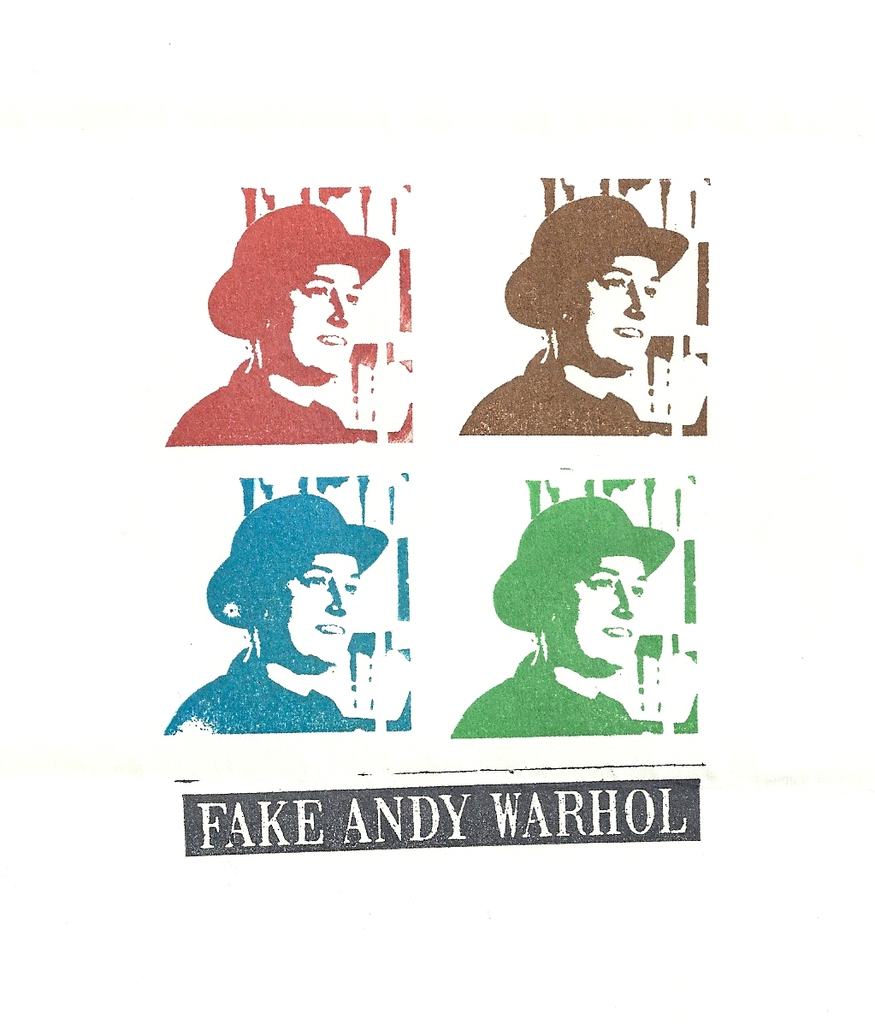 And here is an authentic Moan Lisa envelope:

Thank you for this and all the other fantastic mail-art you send, Moan Lisa.

Moan, you had to be our lifeline on 2/10. Otherwise, great sleuthry by Richard Carnard and Erni Baer.

Let us give three aether cheers for Fausto Grossi - our Mystery Mail-artist #7 whom we found difficult to identify. That in no way diminishes what surely must be Fausto's achievements, as Moan Lisa chose to memorialize him with a fake Andy Warhol.

Thanks Moan. I think what you did is make an Event Score for us.

The IUOMA Self-Portrait group lets you see what many artists look like:

Thanks Erni! Mystery Man #6 is Hans (Jean) Arp! I believe that. No question #9, #9 is the great Kurt Schwitters.

Could #8 be C. Mehrl Bennett? The hat suggests a Fluxus person.

Richard, I am with you that #10 is Bill (Picasso) Galglione.

Why did Moan Lisa choose these artists? Again, can't say. Maybe Moan will swoop in and wrap this for us. You have mail-artists from the "classical" age. Some of them getting their start in the 60s & 70s. Even mail-art had a gender gap. Moan also chose some of the great European DaDa and collage artists. Only patterns I can see.

Moan's gender & identity is a question.

King Richard III, Tis now the winter of our discontent - I do not believe that is Cavellini either. I think Bruno was doing some guerilla marketing for the Cavellini celebration, which is always fine with me. I have seen the Warhol/Cavellini/Buster Cleveland pic taken in NYC. Whether Warhol created anything - I have not the slightest. I'm terrible on Cavellini.

I added 4 more of Moan's fakes to make the list an even 10. The tally so far:

If anyone can identify these folks, great. Otherwise - thanks again Moan Lisa.

Mystery Man #6 is Cavellini? No. Maybe?