December 6, 2011 - The global and epic Asemics 16 Project, headquartered at the IUOMA, closed last month. This mail-art effort that began in May (2011) generated some impressive numbers: Approximately 70 artists produced a staggering 640+ pages of new, fascinating and innovative asemics that are still finding their way into collections, libraries, archives and galleries, not to mention a strong ether presence on blogs and websites.

Very few bloggers were successful at documenting the entire project. I gave up all hope after the third of five editions. To compensate and share my total wonder with the work produced, I want to blog - as time permits - some favorite pages from chapters in the fourth and fifth editions. Project Co-coordinator Cheryl Penn (South Africa) considers the later editions to be more experimental. Reviewing them now, I agree.

The excerpt above is from Guido Vermeulen's chapter contribution to Edition #5: Asemic Syntax. A fine poet and intellect as well as an artist, I think Guido approached the topic by exploring the the signifyer-signified duality of the sign (as in structural linguistics). In short, he pairs letters with those beautiful (stamped?) images, then arranges them in a larger pattern (syntax). From another perspective, I think he has constructed a code that has no solution, a structure devoid of content, still suggestive of language, that would satisfy the requirements of an asemic syntax. I wonder if any of these ideas passed through his mind?

I also note that another artist and visual poet from Belgium, Thierry Tillier, has made this same exploration of the foundational structure of the sign a center of his most impressive work. Guido has a tremendous blog that should not be missed:

Roberto (aka Roberto Rios aka Piro) became part of the core that kept the Asemics 16 Project moving and evolving through five editions. Roberto helped keep communications flowing smoothly, especially posting and commenting on chapter drafts. Perhaps even more important to the project, he was not afraid to experiment. He pursued a number of different directions. As a result, he produced innovative work that I believe had an impact on the other artists. He definitely gave me ideas and inspiration. This was a huge part of Asemics 16: collaborating, learning, and growing with other artists. Here are two of my favorite pages from Roberto's chapter in the fourth edition: 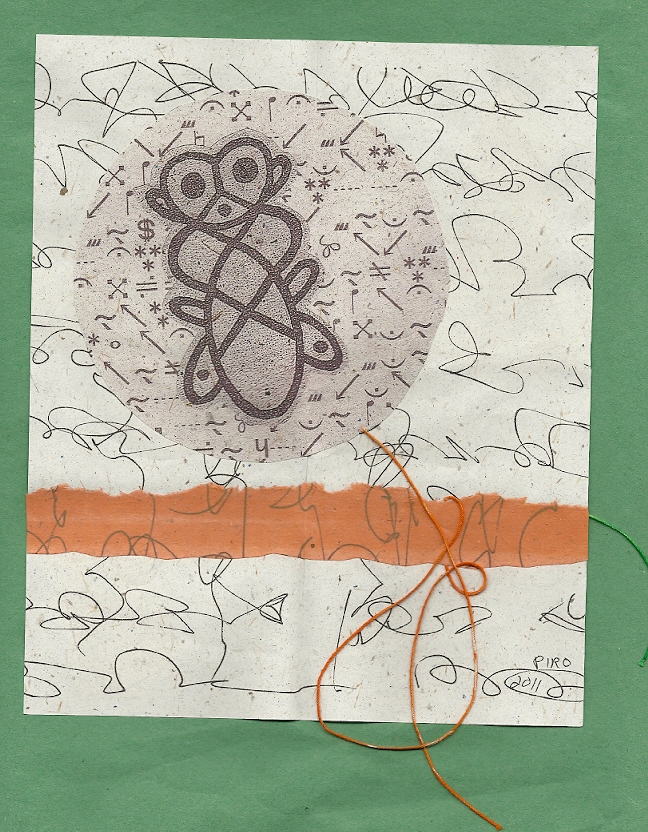 Roberto wrote a dedication in the chapter: "Homenage to the Taino Indians of Boriquen." Given my own interest in Native Americans, I found this deeply moving, especially as I appreciated his achievements in the chapter.

Some of my personal favorites in Asemics 16 were works by artists who used asemics as a route to bypass centuries of culture and return to the archaic (about 14,000 BC?) - especially the primal roots of language and expression. This is, perhaps, the ultimate deconstruction - hopefully not Romanticized - to rediscover and renew humanity, not simply to recycle and reinterpret symbols but also to create them, to find their sources. I find traces and possibilities of all of this in Roberto's work; it was a great joy working with him. He, too, has a great blog where you can stay connected with his work and his correspondence with friends:

I am thrilled to have received Laura P's (aka Laura Podob) contribution to Asemics 16 - Edition #4. I think this is wonderful work. It reminds me of the early assemblage pieces by Karen Champlin (Illinois, USA). Laura's work is language and symbol-based, yet she adds depth by incorporating nontraditional material, such as the screen (that serves a presence/absence function with the large black dot). The composition is primarily formalist. Some tremendous overlaying on the right: 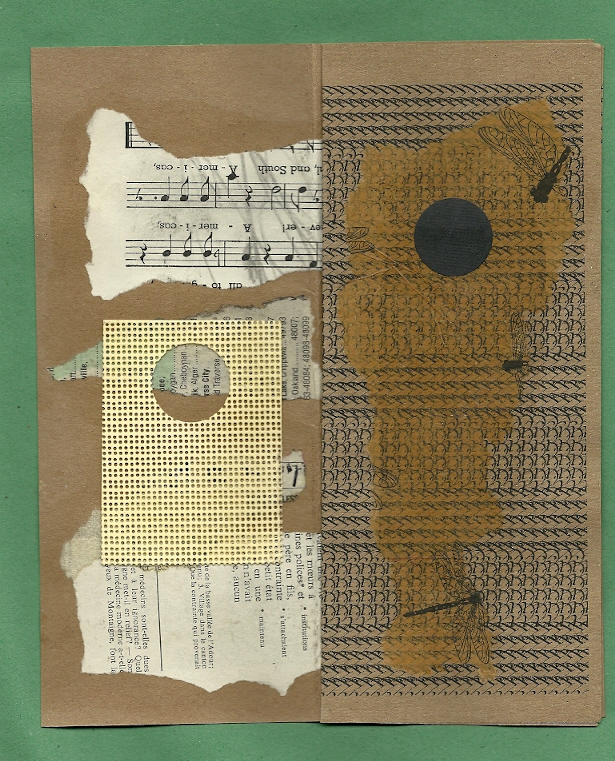 The part I completely adore about this chapter is Laura's use of what seems to be repetitive and over-struck typewriter letters. Regardless of the mode of production, this provides a great reference to the achievements concrete poetry while at the same time producing asemic symbols. Simultaneously she includes ripped page fragments that can function as a kind of Burroughsian cut-up text. They're interesting to read. Here is the center section of Laura P's chapter: Given that asemic writing and visual poetry are essentially literary modes, it's remarkable you don't see traditional literature integrated with these forms more often. Laura does it very literally here, using the older text as a material overlay on the concrete asemics. What I find interesting is that when I spent some time with this, I discovered it could be read in different ways, rotated in different directions. The cut-ups yield interesting results in this case. There are some very interesting asemic shapes in places where the two texts meet. This would appear to be a text that is meant to be read rather than an image constructed from scraps of language, if the distinction I have made is at all plausible. Regardless, I deeply appreciate this fascinating work from Laura P.

And again, many thanks to all who participated in Asemics 16.

What happens when the sleeves run out?

Elvis = Latin form of Elves. SB has proof he lives.

Hurple Paze, Jimi. I said half. Your shoe? Pray it's ketchup.

N - Ray says he can't do a damned thing about it. Wrap them in newspaper

B - I told you to keep feeding them.  Now you face the consequences of your instability.

Message to Tulsa - looks like rain in the basement

That's your pinky in the chili

Nancy & Svenja, I am hijacking myself here.

I have seen the "cougaring" of Svenja on the official Diane Keys blog (outside of IUOMA). I was, frankly, shocked. I posted a comment testifying to Svenja's wonderful mail-art personality and saying she was a bunny and not a cougar.

DK's blog states she is recruiting 200 "cougars" (scantily dressed, somewhat lewd, and more mature women) to appear in a performance piece for animal rights. What these women have to do with saving wildlife is beyond me. My opinion is that Svenja should not appear in DK's performance. But I think this is what it's all about. To see the whole incident, plus my gentlemanly defense of Svenja's honor, scroll down through the DK blog. I am not a "cougar" but I am a "watchdog" when it comes to the DKULT:

Post a picture of yourself and we'll find out, won't we. :-}

Wow, Nancy,thank you VERY much, finally I get it. For days I'm trying to figure out why everybody asks me if I am a cougar!!!

It started, sort of, on Dk's blog at blogspot. A recent performance art proposal. Read it if you want a 2-hour laugh afterward.

DVS, I have not the slightest idea how I became a cigar, äh, cougar.

Thanks for popping by asemic comrades! I'll remember everyone from that project for a long time.

Svenja, you don't look like a cougar. How did DK start that?

This is the thing - there's a lot of work not everyone has seen for obvious reasons. I am also impressed by work from the #4s and #5s especially. So I'll try to keep the Greatest Hits flowing at intervals before they become classic ma and golden oldies. We did meet some one-hit-wonders along the way, didn't we? Where are they now?

Thank you, DVS, for the wonderful blog! I haven't seen the #4s before, how fabulous!!

Yes De Villo i believe there is a connection route between the Caribbean tainos up to Florida coast.

Hi Roberto, I am very pleased to have your tribute to the Taino people. I learned a little about that amazing culture when I was doing a lot of archaeology reading a few years ago. I think - I'll never find the source - they discovered some evidence of a Taino presence in either Louisiana or Florida - establishing a connection w/ the northern AmerIndians. Is it possible? Anyway, thanks again!

CP-SA & CB, when I calculated that the project had produced 640 pages of new asemics, I calculated it again several times. And that's not just about quantity. I think the work is totally impressive across the board.

All brilliant works--wow--and as usual a great and edifying blog, DVS.