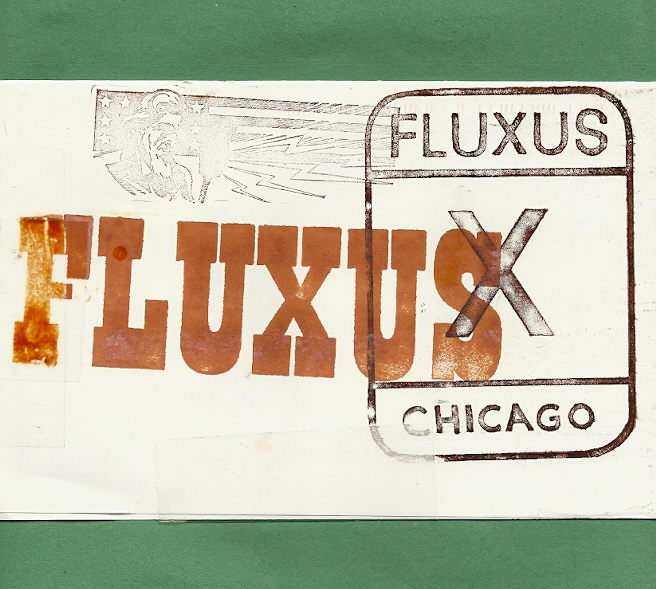 December 9, 2011 - In a previous blog I wrote about a series of Fluxus events held across the U.S.A. in 2011, including activities in Chicago. Good friend Skybridge Studios surprised me with this wonderful stamp that is on the reverse side of a large Chicago Fluxus poster from the event. I have no idea how she got it. I am certainly thrilled to have it. Due to scanner challenges, I had to break the poster image in half: 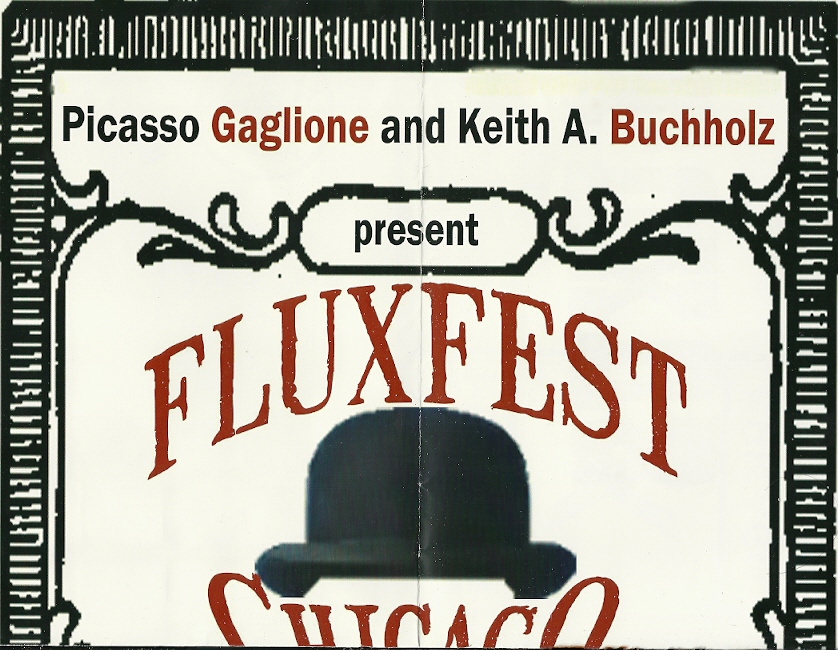 Many of you know Keith A. Buchholz (St. Louis, Missouri, USA) is an important Fluxus artist working today. He is an IUOMA member and active in mail-art. He is linked to the theme: "Fluxus never sleeps." In fact, I think he never sleeps, organizing and participating in events all over the world. He recently curated the George Maciunas show in Lithuania that included work by many friends here.

The poster was designed by our own Ginny Lloyd (Florida, USA). I am less familiar with Picasso Gaglione; maybe someone can fill me in.  Here's the second half of the poster: 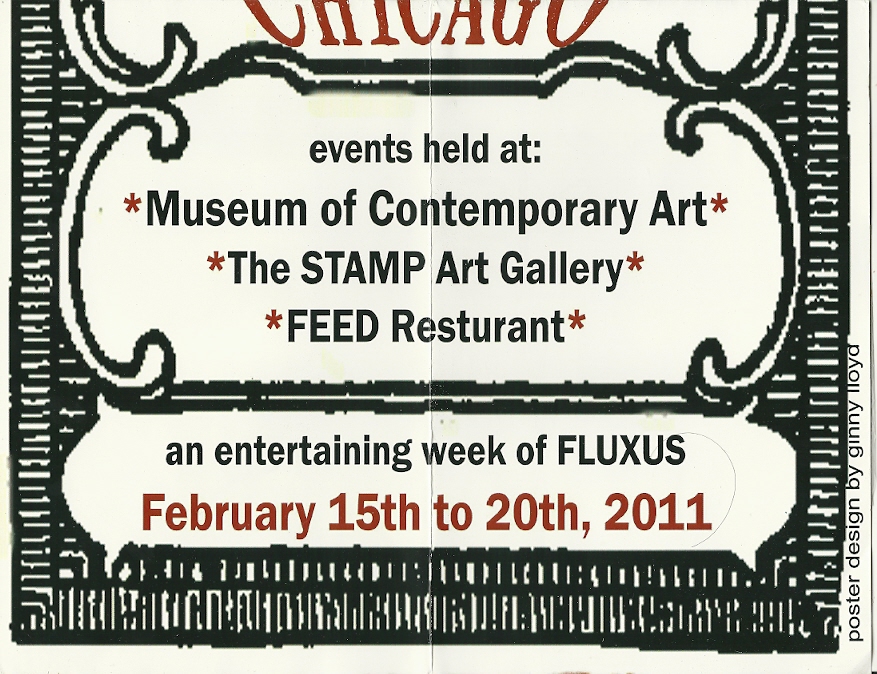 I just could not make Chicago in the depths of winter last year and deeply regret it.  From accounts I have read, there was an emphasis on performance scores and performances; it must have been fascinating. I have discovered, however, that the event will be offered again in 2012. You can find information on the December 2, 2011 entry for Fluxlist: Again, Lisa, my deepest thanks.

Guido Bitossi is a new friend from Rome, Italy. I know nothing about him except that he has a blog (contact provided later) that has Fluxus material, work by John M. Bennett, and a link to Ben Vautier, among other interesting things. I recently received an envelope from him that marks the beginning of our correspondence. Inside is concrete poetry/wordplay he has hand-written:

Italy is a powerhouse for concrete and visual poetry. I notice there is a tendency toward hand-written work far more than you see in the United States.  I like Guido's piece because it is far closer to conventional verse than most of the work we are used to seeing. In mail-art vispo, it is more likely language will be estranged from content and transformed into a kind of raw visual material. Guido reminds us of the full range of possibilities, including a move toward poetry in the literary tradition rather than away from it. His envelope has some interesting asemic or automatic writing included: I am grateful for your friendship, Guido. I look forward to becoming more familiar with your work and trading mail-art. Keep an eye Guido Bitossi's blog for sure:

So is Jim Dine the original visual poet?

First, geez, no I did not receive mail-art from legendary artist Jim Dine. I doubt he would know what to make of a shred of DK's shirt. A recent entry on the exceptional blog of poet, biographer, and critic Tom Clark has got me thinking about Jim Dine all the same.

In mail-art, we tend to have a core of artists we refer to as common currency (even though individual tastes are infinite and we see all kinds of influences). In addition to Ray Johnson and Cavellini, we often talk about Yoko Ono, Kurt Schwitters, Warhol, and Pollock - add a half dozen others. Also include Fluxus.

Perhaps Jim Dine deserves a whole lot more consideration than he has been given among mail-artists because the influence is present. Primarily, he is associated with popart. Yet strong ties and contributions to Neo-Dada, Fluxus and performance art are there als0. And, you know, his work is really good. Even more to the point, his connection to poetry - his longstanding commitment to intermedia that unites word and image - is outstanding and deserves some serious examination. It might provide some new thinking too.

This meditation is inspired by reading some Jim Dine poetry on the Clark blog. Do not become disoriented. The Dine work is placed with some fine work by da Vinci; there is another link to more Jim Dine if you scroll down:

Sue, I know they held them in Texas and NY last year also. That's not to mention things happening Europe, It looks like there was a very interesting one at, of all places, Harvard recently. The various different Fluxlist blogs carry this info. They are listed on the IUOMA main page. I follow Fluxlist Europe myself.

Thank you, De Villo.  Lisa was kind enough to send it to me and I now have it bookmarked.  The Chicago Flux Fest looks like an event worth attending.

Sue, here is the link to the Skybridge coverage of the Chicago Flux Fest. It's also further down in the comment stream:

Would someone point me to the blog of Lisa's: referenced by Thom?  I keep getting sidetracked by all of the other interesting blogs.

This is FASCINATING, DVS!  Great info and linkages.  Fluxus and its many branches/tangents/iterations are like a mesmerizing liquid pool--I love swimming through it, but sometimes can't tell if I'm breathing water or blowing bubbles above the surface.  That's part of its intrigue though...

Thanks for another facet to contemplate, DeVillo, and Fluxus friend-commenters.  Gosh, wouldn't it be fun to be in Chicago for the fun... I liked your blog of last year's trip, Lisa.

OK, I am pondering what a MinX Fest would be. Now Grigori has posted the schedule for this year's Flux Fest in Chicago. Looks like opportunities for people to do performance scores.

MinXFest :-)) you can be sure it will be held in a warm place, prettylily. I'm busy writing the invites.

Another NYC Flux Fest would be fantastic.

Sue, you are so funny. I doubt we've heard the last of MinX Fest. Gold star.

Chicago in the Winter?  I would love to go, but the weather makes this Southern gal shiver.  I'll keep my eye on NYC.  That could be an option.  Maybe the MinXus fest will be held in a warmer place?