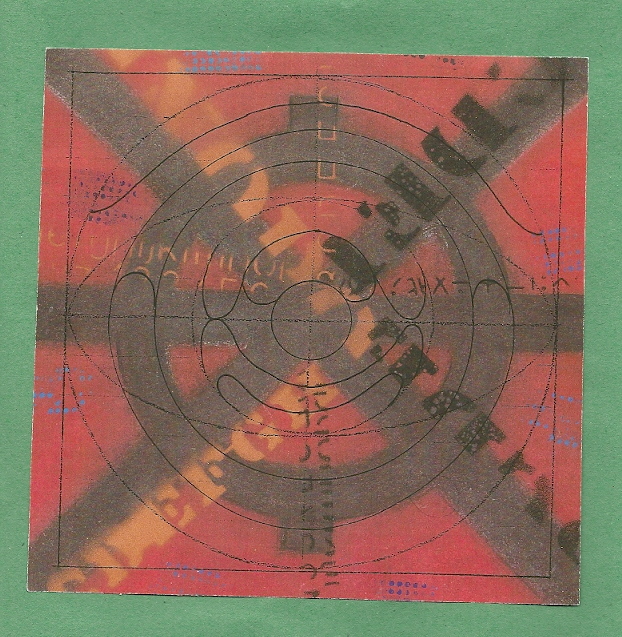 December 13, 2011 - Canadian visual poet Carl Baker (aka ACME) recently sent me an envelope brimming with examples of his work, and it is a pleasure indeed to have it.

Carl's work first caught my eye over a year ago when good friend Karen Champlin (Illinois, USA) posted work received from him here at the IUOMA. The work above (dated 2011) is for me a beautiful example of contemporary visual poetry, integrating language, asemic symbols, colors, and geometric shapes into a highly unified composition.  Might we also see the influence of Jasper Johns here?

I am relatively new to writing about visual poetry. That admitted, in an unpublished essay I have written about the visual poetry of David Baptiste-Chirot (Wisconsin, USA) I discuss the need for the presence of some form of visual syntax to differentiate vispo from collage or other related forms. Visual poetry does not require language (text); it can be a structure of images. I am partial to Carl's approach that is still essentially text based. Here is another piece he sent me: 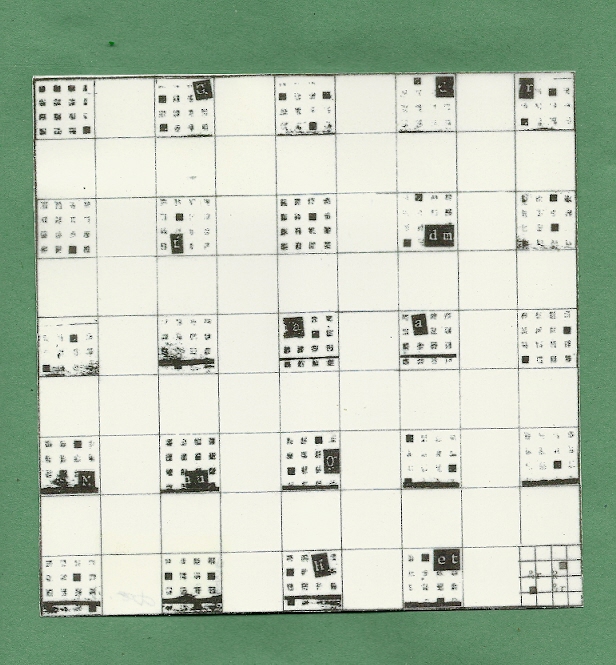 Carl's considerable talent is built on a solid foundation of awareness of concrete and visual poetry. I see many vispoets today who do work in both color and black and white. (David Chirot published two editions last year in Russia: one color, one b&w). This choice, I think partially, draws from the eras of typewriter concrete poetry (Emmett Williams for example and its heavy use of repetition) and the Age of Xerography that has produced an extraordinary body of work barely explored.

Carl's work is uniformly governed by geometric structures (so is classic concrete poetry for the most part). The work above, I believe, reflects the linearity of text. You can't discount the effective use of minimalism either. Whether Carl's work is ultimately formalist could be debated. Even if so, it seems largely to escape the sterility that excessive formalism breeds.

In contrast, especially in visual poets involved with the IUOMA, we have recently seen what I believe is an exploration of organic forms. Here is a representative piece by Cheryl Penn (South Africa): This, now practically classic, asemic-vispo work by Cheryl represents the less formalist, more organic approach. (Much of the work in Asemics 16 would probably classified as asemic-vispo hybrids). I think it presents a nice compare & contrast to what Caryle is doing. Speaking of whom, more Carl Baker: 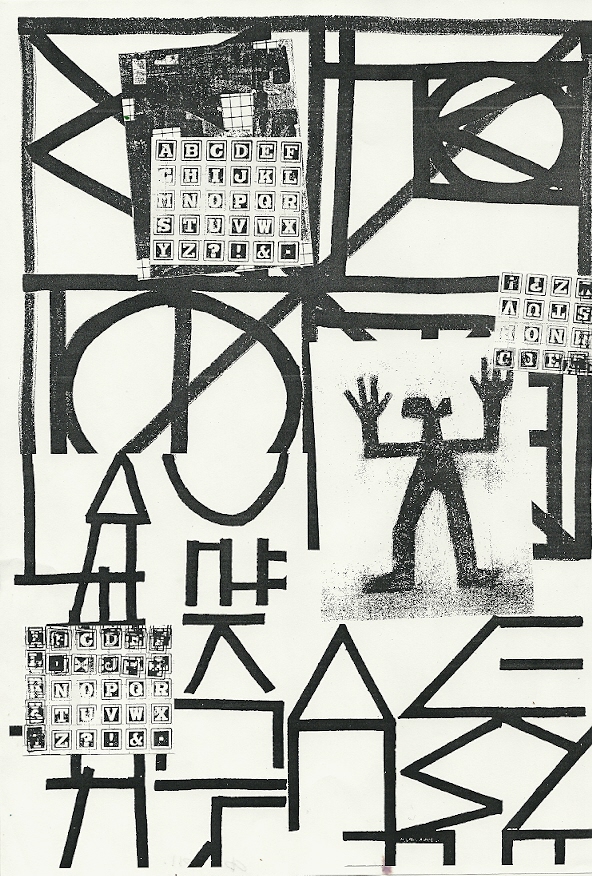 This is an even more striped-down visual poem firmly grounded in concrete poetry and asemic writing; a cut-up approach is also incorporated. The piece is deepened, I think, by a use of archaic and/or symbols of indigenous cultures that add many possibilities for interpretation and thus elude the pitfalls of formalism or complete Semiotic Self-reference Syndrome (SSS). And a classic Freudian would point out the pronounced phallic presence. Caryl included some smaller pieces: These pieces are good examples of works created by visual poets on a smaller scale that lend themselves well to mail-art. The bottom two, if not specifically intended to be, work as ATCs (Artist Trading Cards). Here's another concrete-vispo piece by Carl: A great b&w piece that has the gritty feel of the litzines of the Age of Xerography. (I think we can be confident the art produced by this particular technology will outlast the corporate entity itself; so maybe something good came of it.) I will conclude this lengthy tome with a final, beautiful concrete-asemic-based work by Carl: 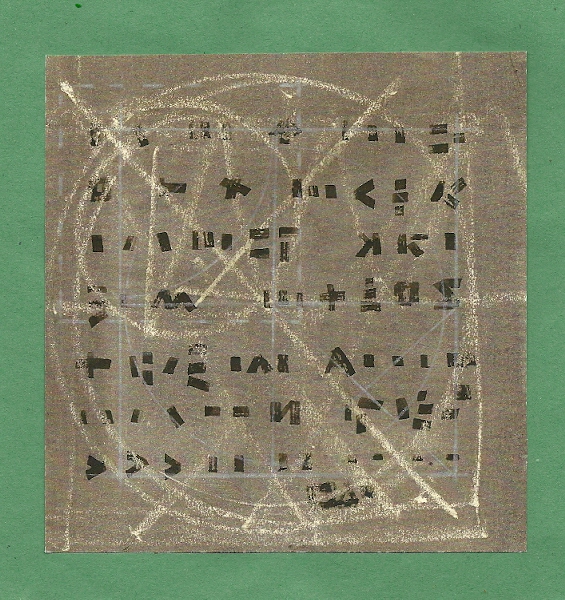 Many, many thanks to Carl Baker for this mail-art package of great work. An addition to the collection for sure!

Cheryl, I haven't checked in much today. That is SO extraordinarily beautiful. More later. Great work, Boss.

What should we call it when a blog is put back on track after having been hijacked?

Just because you thought you would not see VISPO here again - SURPRISE :-)))!

Martens are vile creatures. They feed on some cables inside your car, and next morning you can't start the engine.

I did practice the Annie Lennox (fab) version, but it is only a cover. Ended up singing the Ash's version, which I think is the original one. It's a good song.

Of course Mink Fest will have to include karaoke performances. So maybe it should be held in Tokyo after all.

Oh, and will there be Dean Marten karaoke at MinX Fest?

Oh geez, I did a search and you performed a Eurythmics song. Marie Antonette as Annie Lennox? This is not art; this is MinXus.

Any hope of discussing vispo here is lost. Cheryl posted a great comment further down the stream about not worrying about definitions. I like that. We are dealing in mixed-mixed-media after all.

I fear the visual poets will abandon their careers when they discover the possibilities of karaoke, Oh well, the Law of Unintended Consequences.

in what language do you present your karaoke performance?

It's amazing that in mail-art you wind up learning so much about rodents. A marten is apparently different from a mink. I'm concerned particularly that they climb. I thought all these things were pretty much extinct. A pine marten: 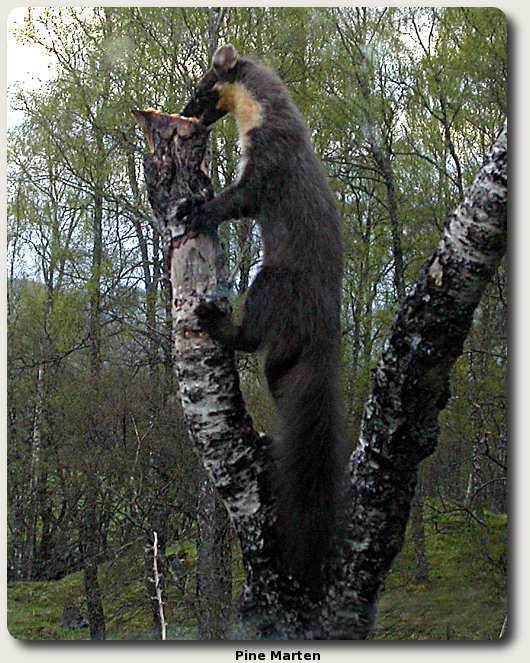 I did a search for "mink attack December 13, 2011." This story came up and also a bunch of stories about humans attacked by minks. I think MinXus needs some non-violent manifesto.

Really, Karaoke is an ultimate performance art for our time. I personally think it would be wise for MinXus to embrace it. Isn't Grigori an Elvis impersonator? On top of being a RayJay impersonator?