A Great Gig Collage Tribute to San Marino, and/or How I Would Keep My Children Quiet for 15 Minutes When We Went on Holiday

The Family Herman used to go on holiday from the South of Holland (Maastricht) to the South of France (Argélès-sur-Mer). The journey would take about 10 hours fast driving. Cries from the children "Are we nearly there yet, Dad?" would break out before we had even left the drive of our house -- which was only 4 yards long (the drive, that is, not the house). The journey to France would take us through Belgium and Luxembourg before we got to France. I would manage to keep the kids quiet for about a quarter of an hour by giving them an extra strong peppermint when we entered Luxembourg, and promising them more goodies if they had any of it left  when we left the Duchy; This kept them quiet. For a while.

Anyway, like Luxembourg, San Marino is a small country -- in fact it's a very small country, nay, a micro country, indeed the smallest republic in the whole wide world. And this is a tribute to it. It is based on pages from a Sammarinese (now there's a new word for you!) stamp album filled with...well if not stamps, then stamp size images*. And a bilingual text, in English and French.

Here is Great Big Collage no. 16 -- my Tribute to San Marino: 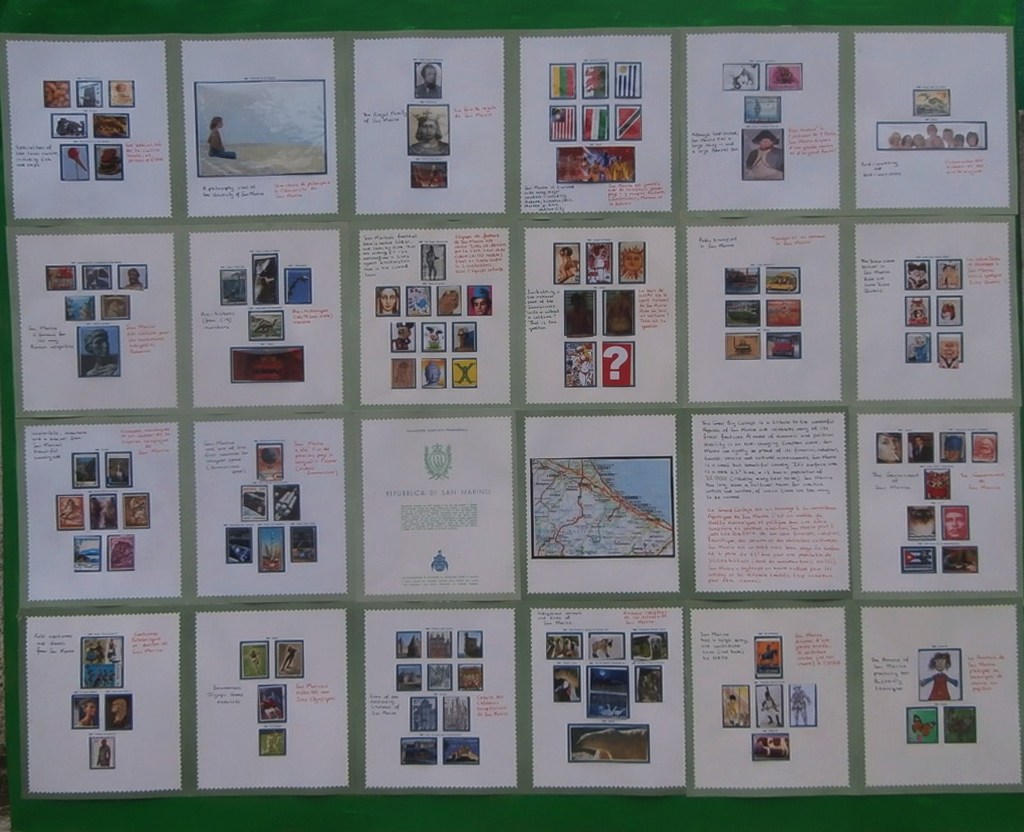 And now, by popular request -- 'Thank you Bianca and Boots' -- I will highlight some of the wonderful features of this country, starting with it's world famous University: 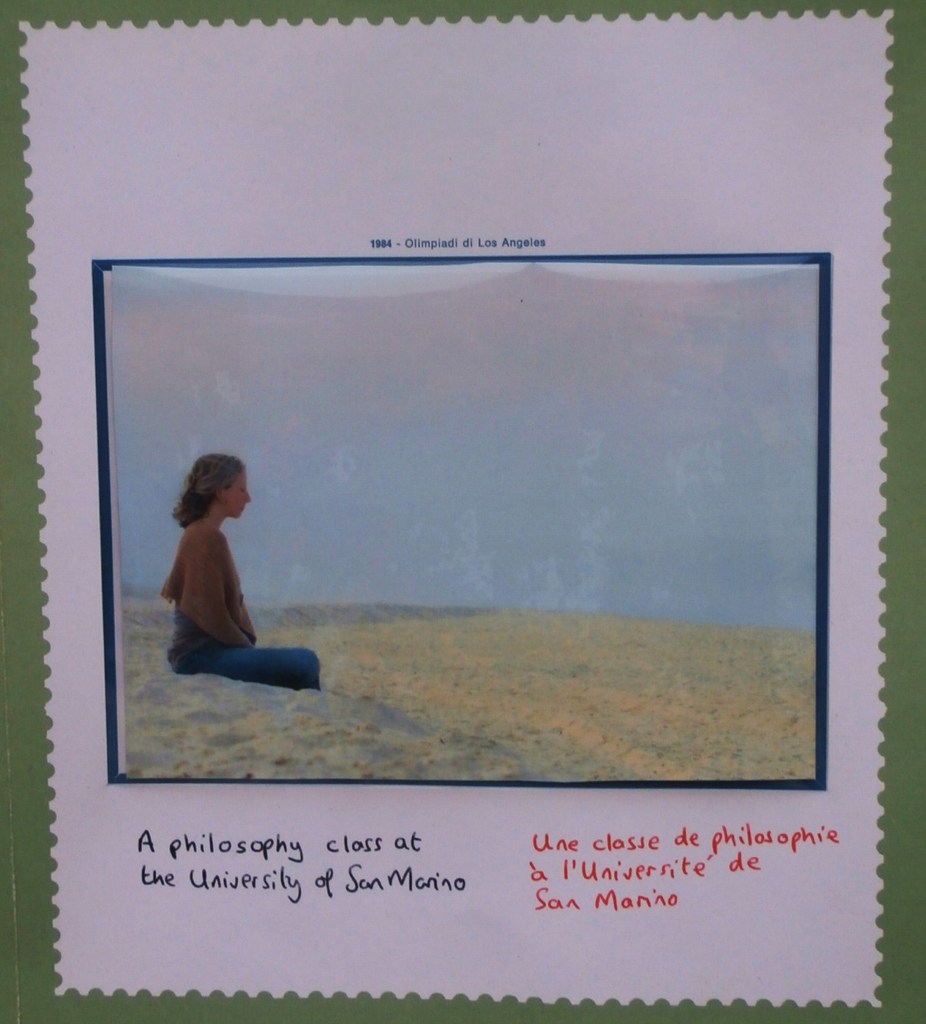 Next we have the football ('soccer' to you lot) team of this mighty nation. It's ranked last in the world, which is not all that surprising as it includes Micky Mouse, a sleeping Smurf and a naked lady: San Marino is also famous for it's navy (2 ships, a punctured inflatable and a decoy rubber duck) and the size of it's one and only Admiral: Next we come to the Government of San Marino -- it's leftist tendencies (after all it includes Marx, Mao, Che and Fidel) are somewhat offset by the inclusion of Robin, a Siamese cat, and a Joker picking his nose: Onwards now to science and technology in San Marino, whose space programme (program to you lot) is much admired by NASA: Last but one, I really must draw your attention to the Sammarinese army which is part of NATO. Unfortunately, recent budget cuts in the Republic's defence expenditure means that the Army can no longer afford tanks or armoured vehicles -- but it has lots of brown and white cows: 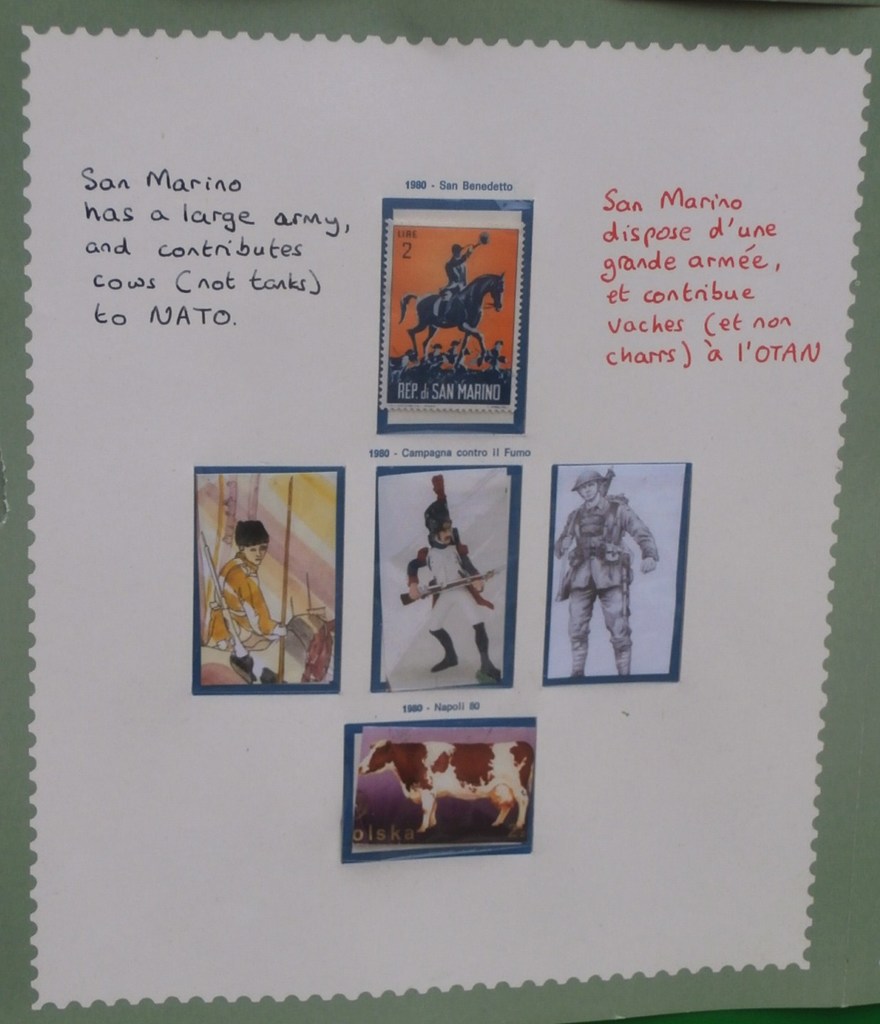 Finally, we come to the national sport of San Marino -- sunbathing! Topless or not? That's the big issue to e decided by the Grand and General Council: Watch this space for further developments.

"Have you ever been to San Marino, Val?"

"Yes, when I was a teenager, but I can't remember anything about it. Once upon a time I was going to write a book about the government and politics of San Marino and the other European micro states, but I never got round to it."

The Sammarinese footballer Davide Gualtieri who scored the fastest goal in World Cup hisory...against England in 1993 (but England eventually won 7-1)

Dean: yes, hre children came with us when we went on holiday; We rarely bought them back, and they were reported to be awndering around the Pyrenees crying "I Oh ma!" (It might have been 'IUO MA', but was not 'I Oh Pa!')

Katerina: yes Sammarineese unemployment is low. Both members of the workforce are currently employed. There are about half a million sheep in the Falkland Island, and less than three thousand people living there. The things you learn at IUOMA.....

I didn't know you were suppose to let children ride in the car when you went on holidays.  They always went in the boot (trunk) with not too much problem.  Of course I had to install a big 3D TV screen in there with surround sound.

Once upon a time, driving through Italy, we went through San Marino,

"San Marino is considered to have a highly stable economy,

with one of the lowest unemployment rates in Europe,

no national debt and a budget surplus.

It is the only country with more vehicles than people..."