In this group I ask members to place links to sources (new and historic ones) for people who like to do research on the subject of mail-art.

I will moderate this group, so postings not related to the subject will be edited or deleted. There are plenty of places in other groups for that.

You need to be a member of Mail-Art History to add comments! 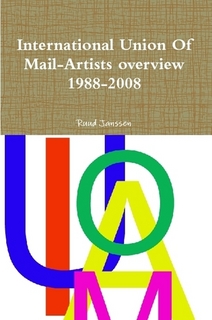 In the year 2008 the International Union of Mail-Artists (IUOMA) was 20 years old. This book contains texts by Ruud Janssen, John Held Jr., Wilma Duguay, Tulio Restrepo, Vittore Baroni and Geert de Decker. As illustrations lots of images are used created by IUOMA-members over the years to support the union idea.

A .PDF file with historic details:

from the Ray Johnson Estate - USA

Mail art—along with the synonymous terms Postal art and Correspondence art—refers to small-scale works that utilize the mail as a distribution system. These terms have also come to refer to related formats, including artist-designed “postage stamps,” postcards, and even impressions from rubber stamps. (Rubber-stamp impressions have been utilized in art since World War I, initially by the Dada artist Kurt Schwitters, but only as one of many decorative, collage-like elements.) The first self-conscious network of Mail artists was begun in 1962 by Ray Johnson, who dubbed the endeavor the New York Correspondence School. Its collective output was featured in a show at the Whitney Museum of American Art in 1970.

Ordinarily, Mail art has seldom been given a place in museums; it is one of the most populist art forms in history. Instead of creating objects and finding a place to exhibit them, Mail artists need only postage and the often copy art–based means to make letters or postcards. Mail art exhibitions (often unjuried) featured eclectic themes, ranging from opposition to the Vietnam War to homages to comic-strip heroes. The egalitarian aims of mail art, in fact, dovetailed closely with those of Fluxus, which provided a cadre of artist-correspondents. Unusual Mail art works have been produced by conceptual or Fluxus artists such as On Kawara, who for years sent rubber-stamped postcards proclaiming the location and time he got up each morning, and Tom Marioni, who sent engraved announcements of his (fictitious) appointment as director of the San Francisco Museum of Modern Art in 1973.

On the IUOMA at NING page there is also a link-list (right) where some interesting samples, blogs, and overviews can be found.

The egalitarian ethos and self-conscious anarchism of mail art may be traced to the medium’s origins in the Fluxus art movement of the 1960s. Several artists associated with Fluxus established the open aesthetic and populist profile of mail art as it emerged in the early 1970s. This populism remains the focus of the mail art exhibition, and the realization of mail art as a democratic art form has been one of the movement’s chief attributes. Starting in the early 1970s, when mail art was often discussed as a particularly vibrant branch of counter-culture art, the internal guidelines that still govern the medium were developed and codified. Since that time, mail artists have come to define themselves as working within a parallel arts institution, a curious doppelganger of the official art world that they claim to oppose. While mail art allows for unique approaches to dynamism and flux, its egalitarian aspect remains the focus of mail art theory and practice.

An amorphous and ideologically disparate collective, Fluxus itself remains the source of many conflicting claims regarding its intent and legacy. "Fluxus is more important as an idea and a potential for social change than as a specific group of people or a collection of objects," notes Ken Friedman, one of the group’s most prolific historians and theorists. George Maciunas, the group’s principal architect and organizer, stressed both dynamism and social action in a 1963 manifesto (fig. 6). Here, the dictionary definition of flux as an "act of flowing, a continuous moving on or passing by," is pasted next to hand-written exhortations to "fuse the cadres of cultural, social, and political revolutionaries into united front and action."

Growing out of an assortment of performances, presentations, and events developed by a group of artists working in New York City, the Fluxus movement has always been non-hierarchical. Planned originally as a magazine, then as a sponsoring group to advocate and show new artistic developments, the Fluxus movement encompassed a wide range of activities during the early 1960s. The original group centered on figures like George Maciunas, Nam June Paik, Henry Flynt, and Yoko Ono, and the early movement facilitated concerts and presentations in the United States and in Europe that derived from what Maciunas referred to as a "neodada" esthetic. Owen Smith characterizes these early roots of Fluxus as "a form of experimentation most directly concerned with a post-Cagean interest in concretism and action music." The specific ideological and cultural agenda behind such events, however, has remained less clear. While many of the artists in the Fluxus circle were concerned with the political and social implications of their work, several others, including George Brecht and Robert Watts, had no real interest in political activism. Thus, Fluxus activities ranged from the initial European Festum Fluxforums to proposals for social reform and public housing, from Maciunas’ Fluxshop to games of stilt soccer. Reflecting the larger political and social movements that influenced so many artists in the 1960s, Fluxus artists principally saw themselves as adherents of an alternative attitude toward art making, culture, and life. It was these ideas that shaped the early mail art network as it grew out of Fluxus.

A BRIEF HISTORY OF POSTAL ART

Ed Plunkett, the man credited with coining the phrase New York Correspondence School, once said that postal art probably got its start the day Cleopatra had herself wrapped in a blanket and delivered to Caesar. Before the pony express, before e-mail even, there was good old fashioned hand delivery and people have used it for centuries to issue death threats and profess their love, among other things. As long as there has been mail, there have been people embellishing it in various ways, both physically and, more importantly, perhaps, theoretically. 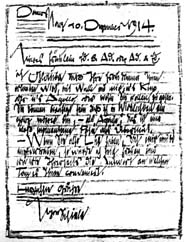 We all know about Vincent van Gogh's letters to his brother Theo that were packed with drawings for painting ideas. Today's mail artists only wonder why the hell he didn't mail that severed ear off to Gaugin in Tahiti. Anyway, as long as there have been artists and there has been post, there has been postal art. Egon Schiele lived a short life in Vienna but he did manage to bang out the beautiful letter (right) in 1912. But like van Gogh, it was just a coincidence-- a by-product of the fact that he was a creative guy with something to say and a place to say it. 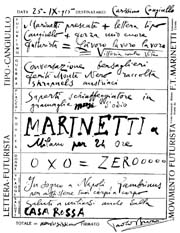 The more theoretical branch of postal art probably has its roots (left) in the Italian Futurists at the turn of the century. They actually used the mail as an artistic device. They sent letters back and forth from World War I praising the beauty of war (they were a sick bunch, what can I tell ya?) but they also used the mail imaginatively, creating innovative stationary, letterheads, logos, postcards and rubber stamps.

Speaking of rubber stamps, let's not leave out poor Kurt Schwitters, who called his activities Merz and rubber stamped all over the beautiful collages he made, which also happen to have included postage stamps. Merz was a bit like Dada, the undefinable international anti-art movement that I am not at liberty to discuss right now because I have been sworn to secrecy. Look it up. 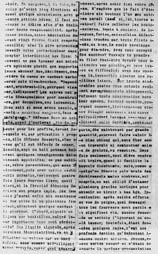 Marcel Duchamp wasn't Dada. He didn't like to join groups. But he did manage to create a seminal piece of mail art in 1916 in the form of four postcards (right) to his next door neighbor that employed perfectly correct language construction to a text that was actually without meaning.

And on and on it went throughout the 1900's. By the 1940's you have Ray Johnson embellishing envelopes in Detroit. And in France, a group called the Noveau Realists were heavily using conceptualism, rubber stamps and (left) Yves Klein's plain blue stamp that he actually used to mail letters. That was in the 1950's, about the time the whole thing starts to explode. A big part of the explosion was not only Ray Johnson, who saw the mail as a performance piece that fused with his collage-making activities, ..... follow link for more!.............................

The 5 books with all interviews

The complete project has been put in 5 books. I interviewed about 80 mail-artists in the late 90-ies about how they saw the network and the changes because of internet. Historic views.

And when you would like to have a hardcopy of the book you can order a print of these books with colour-cover on:

For only about 100 US$ you have the complete set of interview which I worked on for many years. Digital it is even available for free!

When you use quotes, please ask permision first.