January 27, 2012 - Close IUOMA friends know that Dark wall (aka PIP, CLP) sublets post office box space from me for his various mail-art schemes, the best known being D-Kollectibles, which trades in memorabilia from the artist Diane Keys (Elgin, Illinois, USA). The more discerning among us also know Dark wall for his epic visual poems, such as "Stations of the Cross" and "Observations Upon the Mammals of Alsace."

Dark wall receives a surprising amount of mail-art, given that many question his existence. While he was away, I took a peek into into his treasure trove of favorite pieces. I thought I would share some of them with you. First, is this great altered book piece from Lisa Iversen (Indiana, USA). She addressed the piece to me, but clearly it is for and about Dark wall.

Sometimes I wonder, as surely Dark wall must wonder, how Lisa came to be so well read and has such an uncanny ability to find just the right literary material. These pages are about Auburn, New York, where my studio is currently located in a decaying building erected in the 1920s, which I have named "The Overlook Hotel" because of the similarity to Stanley Kubrick's film. Lisa Iversen was able to find book pages that discuss Auburn's most notorious landmark: How did she find this? It is definitely about the notorious Auburn Prison and has accurate historical material. Here is the reverse side of this fantastic piece: 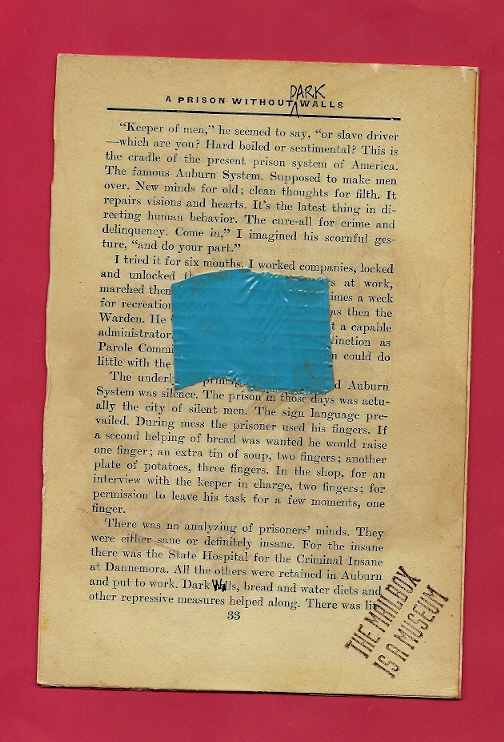 Really a thoughtful and clever piece that plays on the imagery of dark walls and the history of Dark wall's present turf, also including a piece of blue tape, that ties it to a larger progroject. I can see why he values this piece so much (and hasn't tried to sell it or trade it). Do not miss the Skybridge blog!

Then I found this holiday card from Marie Wintzer (Japan) in Dark wall's mail sack. It has clearly been viewed frequently, and Dark wall has given it a revered place in an attempt to preserve it. Dark wall and Marie share roots in the ancestral land of Alsace, and this is of profound significance to him: 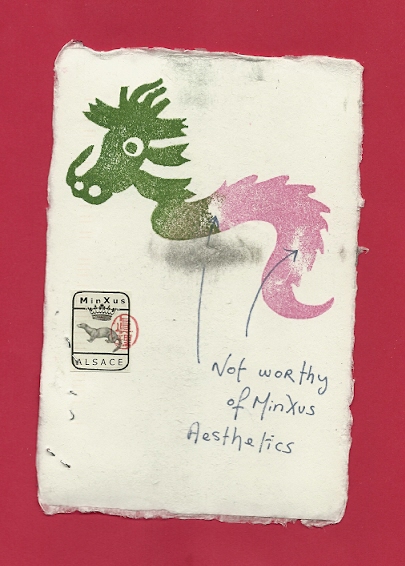 This bears the MinXus-Alsace stamp that Dark wall helped create. He has been an enthusiastic supporter of MinXus and the Arthur Rimbaud Symbolist School of Subtel Aesthetic Obscurity. However, he rubbed against orthodoxy with his recent "MinXus Music" pieces, so his involvement is somewhat in question. Here is the reverse side: I am guessing what touches Dark wall most deeply about this card is that Marie stapled her "last shred of dignity to it." For a very long time, he has been hoping to obtain a shred from Marie's crimson, royal sleeve. Could she have granted him this token? A treasure indeed!

Be sure to visit Marie's blog - sure to put a mink in your jammies!

To complete this brief tour of Dark wall's mail-art treasures, here are two pages from the Asemics 16 chapter contributed by KDJ. I think it is very nice work: 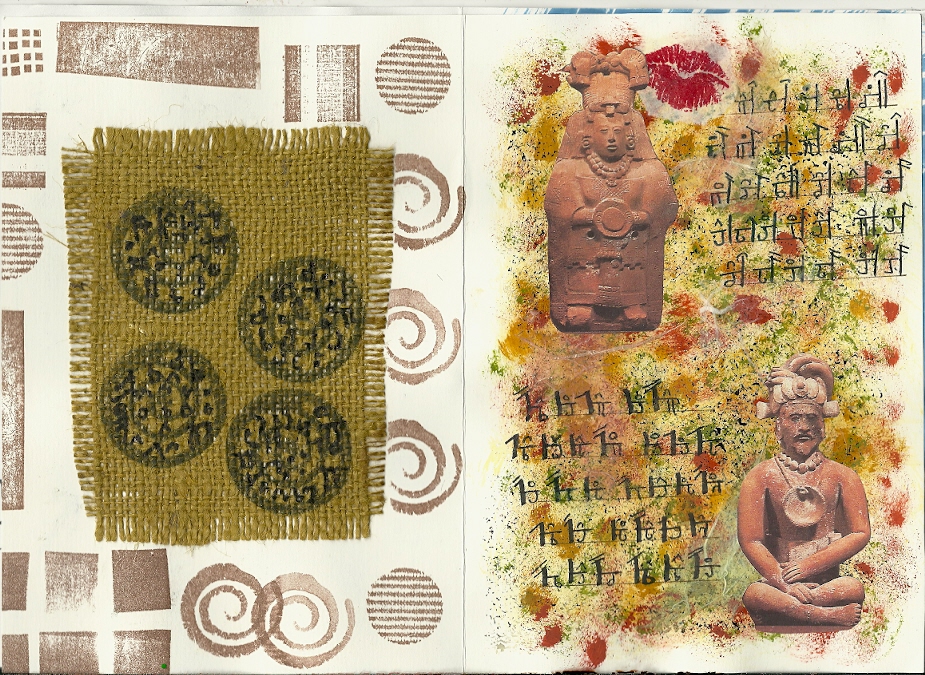 Last is something is something that comes as a complete surprise: A chapter of excellent asemic-vispo in an envelope addressed to Dark wall. The work is by Liliana Bogao (Norfolk, Virginia, USA) and was published in the Asemics 16 Project. I think it is yet another "lost classic" from the project: 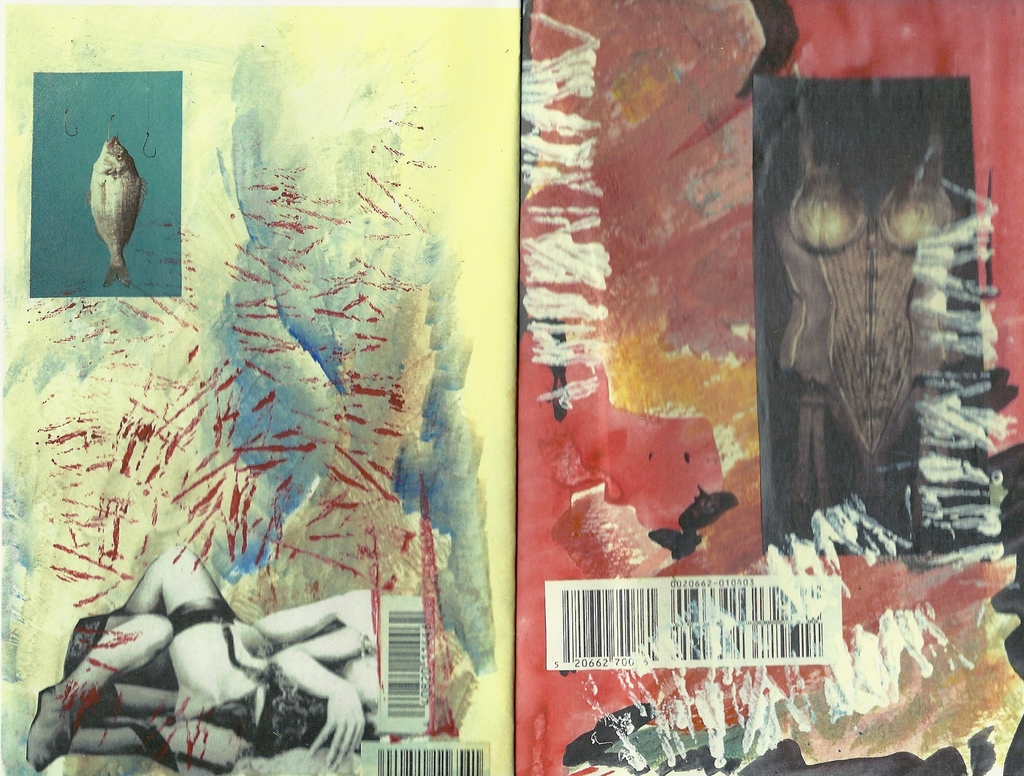 This work has asemic writing but is particularly strong on vispo elements. However, I might suspect that this has something to do with Dark wall's interest in assembling a huge collection of women's shoes. On his behalf - excellent work, Liliana!

I suppose I had better wrap this before Dark wall returns from his obscure nocturnal ramblings. We passed upon the stair, we spoke of was and when

Although I wasn't there, he said I was his friend
Which came as some surprise I spoke into his eyes
I thought you died alone, a long long time ago

Oh no, not me
I never lost control
You're face to face
With the Man Who Sold The World

I laughed and shook his hand, and made my way back home
I searched for form and land, for years and years I roamed
I gazed a gazely stare at all the millions here
We must have died alone, a long long time ago

Who knows? not me
We never lost control
You're face to face
With the Man who Sold the World

Who knows? not me
We never lost control
You're face to face
With the Man who Sold the World

Awaiting transmission from the eternal network

The Nirvana singer is Kurt Cobain. Kurt Cobain, not Bowie. He died by suicide several weeks after that performance. So the performance is considered a big deal by fans - very similar to the death of Jim Morrison. You know Jim Morrison and The Doors?

Ziggy - Ziggy Stardust - Ziggy is another name for David Bowie. Bowie invented the character of a rock star for his album "Ziggy Stardust and the Spiders from Mars."

Best-known "Man who sold..." is Nirvana live. But English won't help you

performed here by ziggy who wrote it (but w/o m ronson). better known today by nirvana cover

Bottom feeder, why does that make me laugh? :-0

bougie passée :-)) I think the allumette écrasée is not treating you well...

Dark wall's a bottom feeder. I'm sure he'll be around for a long time.

I think we know just by looking at him that nothing can save Dw. Maybe his art? If it doesn't get hijacked by the dim-burned-out-not-even-slightly-glimmer-anymore-phare-de-voiture. Is there some hope?

Lisa's simple addition of "A Prison Without Dark Walls" is beautifully poetic. I hope Marie can turn that into a Minxus Dance Track. I think DW likes rave dancing. He does seem to be a tragic figure like Kurt Cobain. I hope he doesn't meet the same fate. But surely among the many superheros and heroines that grace these pages, he can be saved.

I meant to add: Theodore Dreiser's "An American Tragedy" is also a good literary reference for Auburn. The case upon which it is based happened in nearby Cortland and the trial scenes in the final chapters are set in Auburn, in the shadow of the prison. Interestingly, Seward was the first lawyer to successfully use the insanity plea - before he went on to other notable achievements in DC.