I'm not often a fan of trashpo but this bit of squished and gilded rubbish from Martha is exquisite. The scan doesn't do it justice. 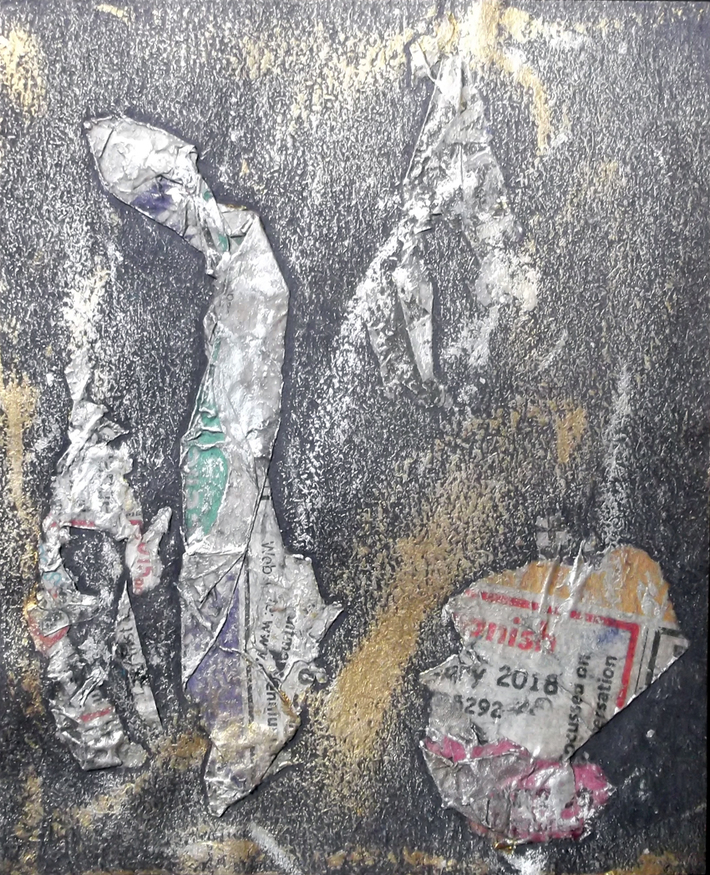 A matchbox of trinkets  — thank you Laurence Gillot! 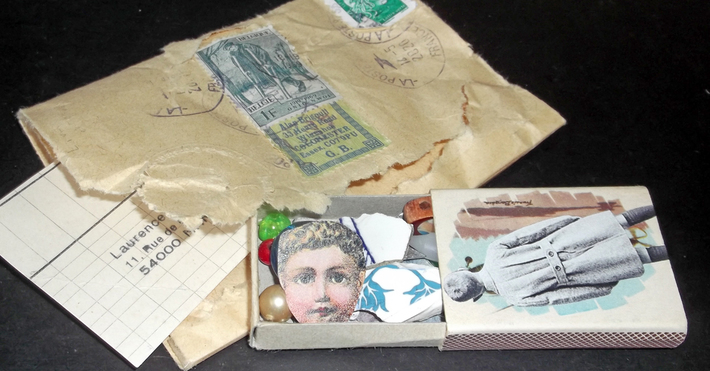 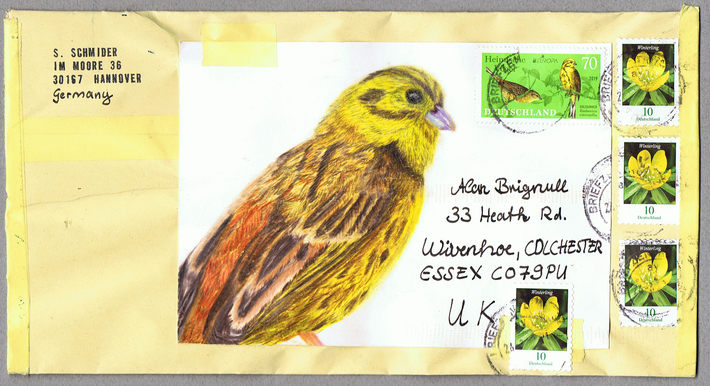 This yellow envelope with a drawing of a yellowhammer arrived today from Sabrina. The picture seems to be a coloured pencil drawing (?) and is absolutely incredibly detailed. Thank you!

The post is still operating here, but many post offices are closed. I'm glad I have a good supply of…

Is there a special postman for strange colourful mail? All these arrived in one delivery, some had been in the mail for weeks. Thanks to Bonniediva, Alan Turner, Petrolpetal, Mary Anne, Ruth Giles and Dovbee 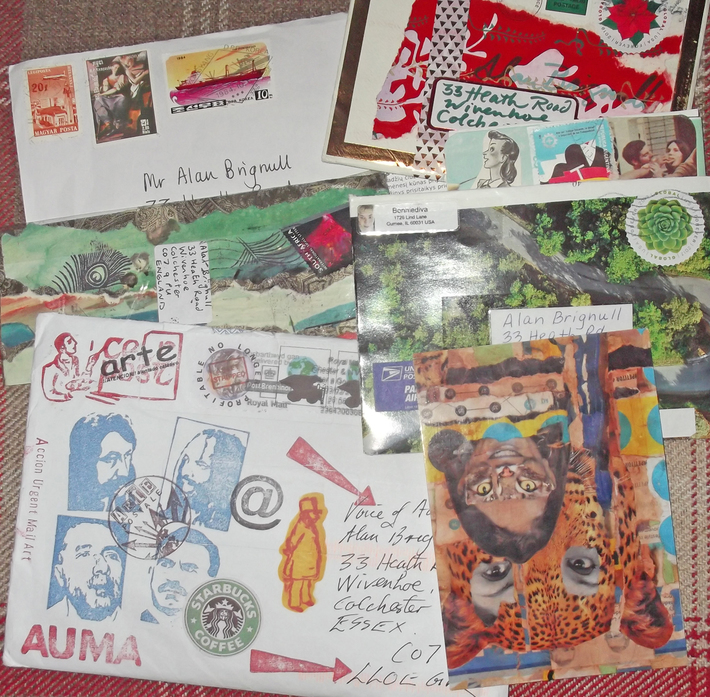 Sometimes I pity the postal workers of non-Latin countries like Russia or China who have to be proficient in more than one script. Ours coped with Richard's calligraphy, though. 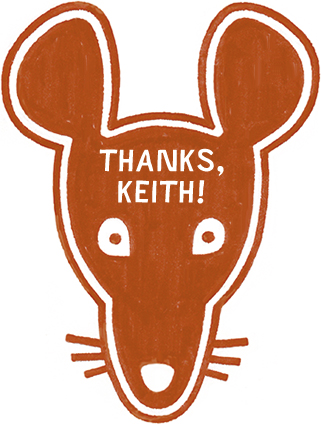 What is this all about? Many thanks to Tiny Whisk!

Thanks to Sabrina S for this excellent wood pigeon cut, in a very fishy envelope 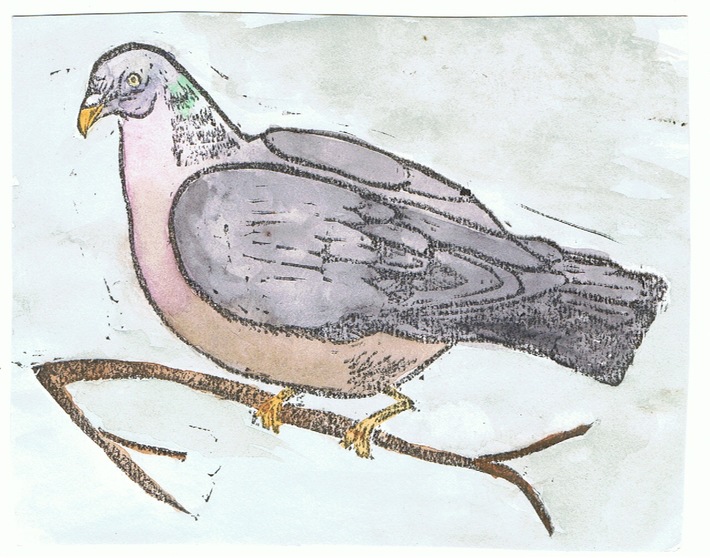 Thanks to Ilya for this bit of philatelo-constructivist collage, and apologies if I have it upside-down! 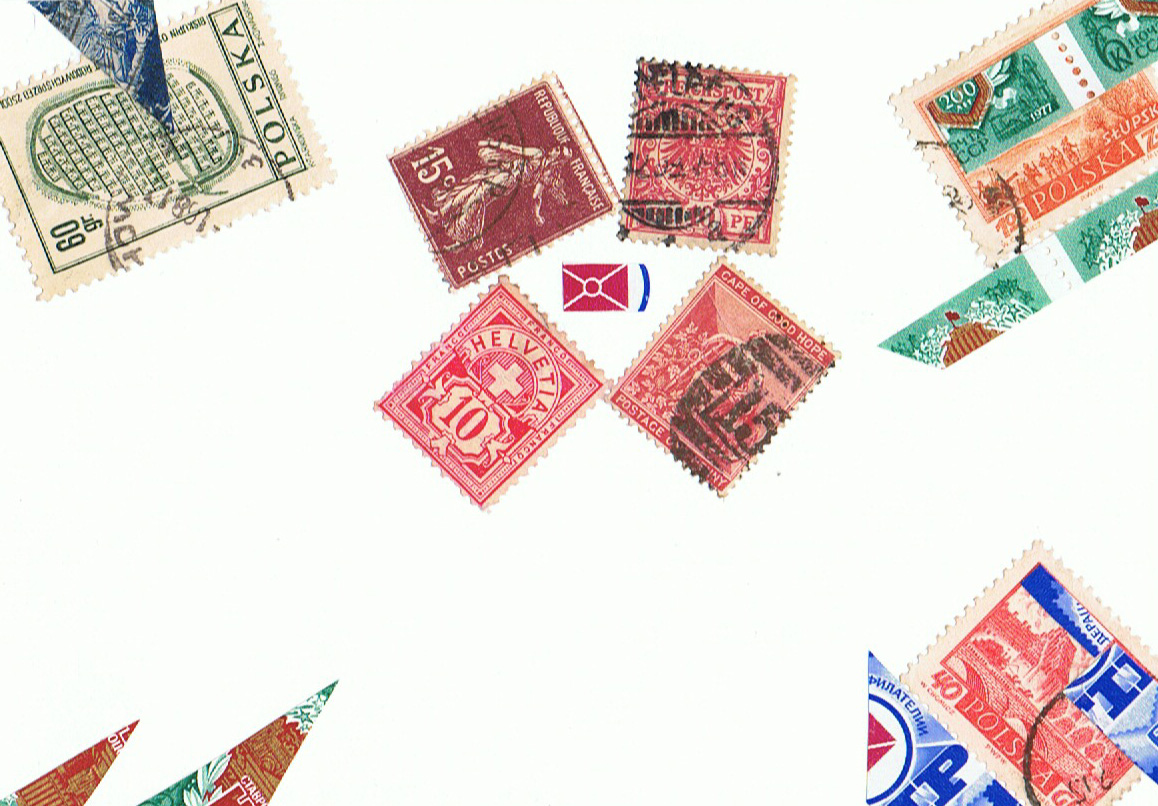 An amazing cover which made it by Occussi-Ambeno airship all the way from Waikoa to Wivenhoe in only about six days, if we are to believe the postmarks. So quick that they didn't have time to cancel the one UPU stamp! 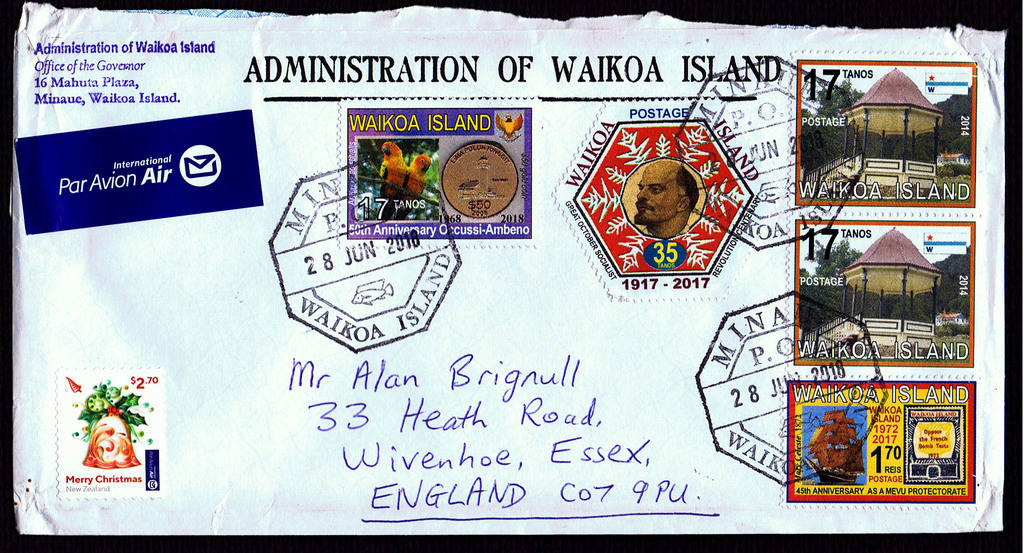 'It's about time' from Momkat

A black sun setting over the ice-cliffs of Antarctica? 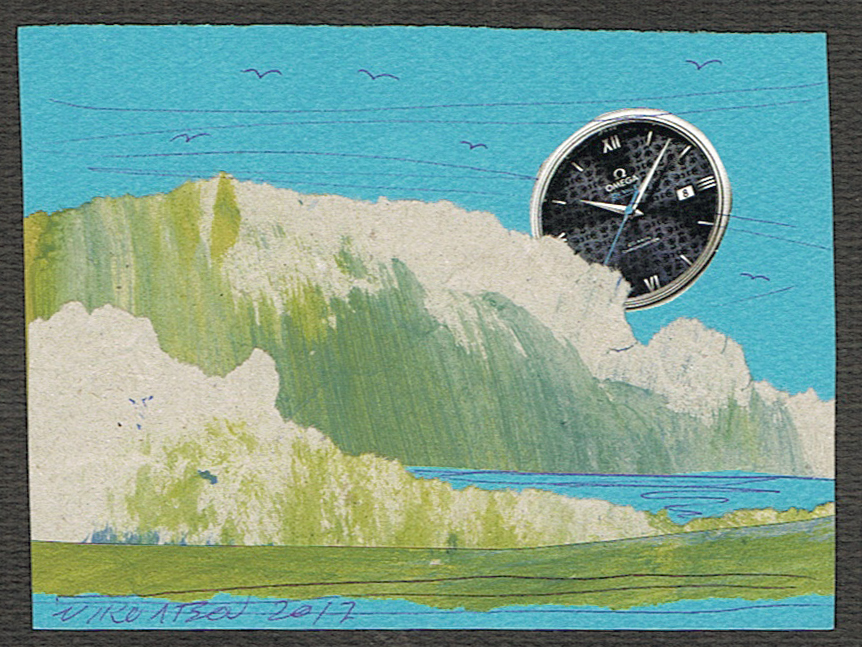 After all these circles it was nice to receive some squares in the mail today from The Lone Ant. Thanks! This arrived from Ruth Giles, sent the same day as I had sent something to her. Does this often happen to you? 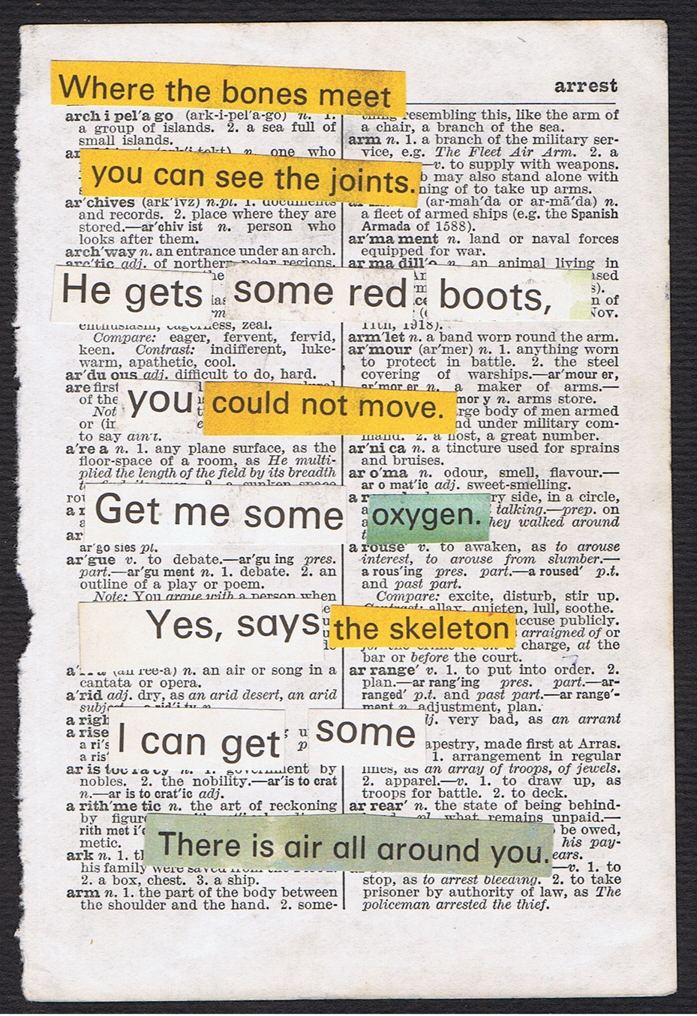 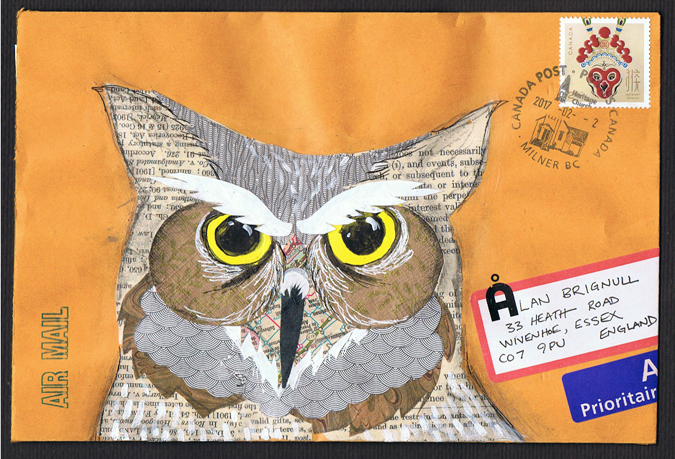 This incredible collaged envelope by Stuart Charlebois arrived today. He writes that it is hard to send work away when it comes out right, which is a familiar feeling and makes me all the more grateful to receive something like this. Something crazy from Momkat — I recognise that little sticker! 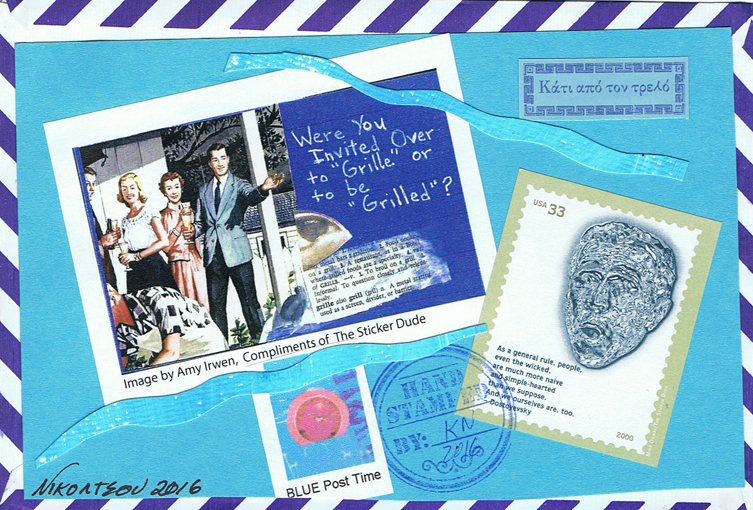 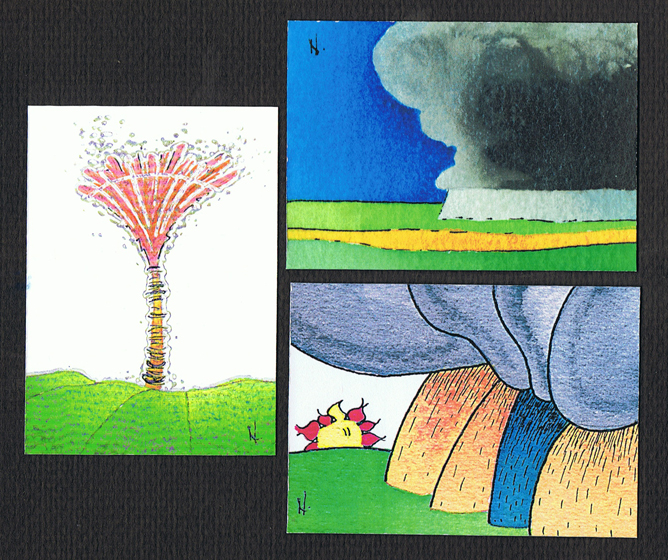 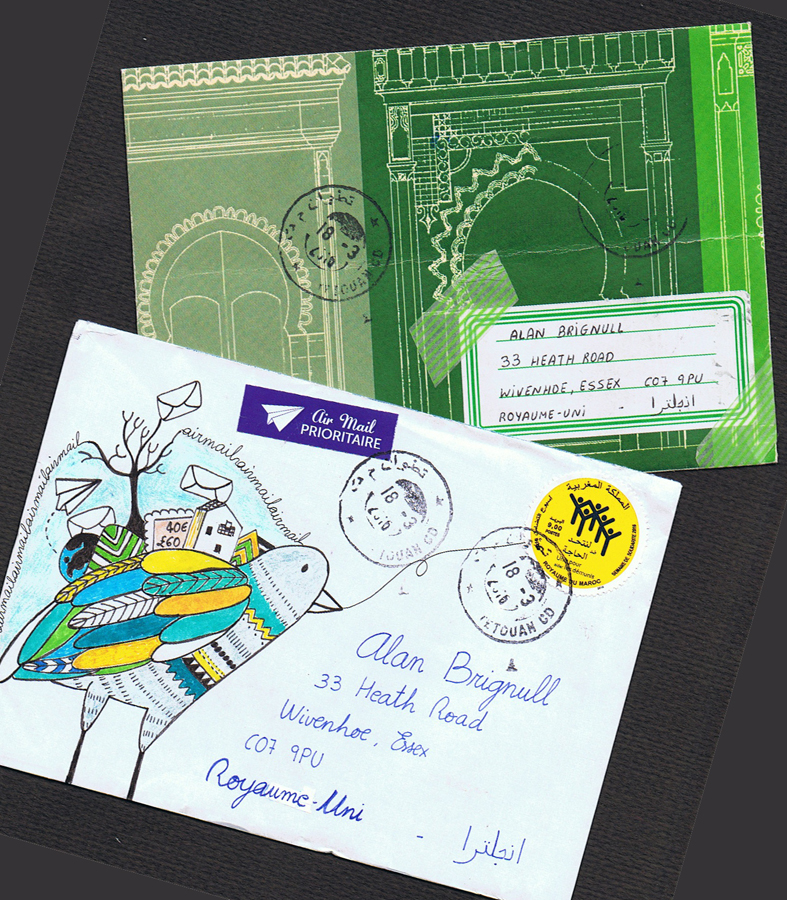 Eva in Morocco posted two envelopes to me at the same time — one was decorated with a very colourful carrier pigeon (apparently wearing a Fairisle jumper) and contained a letter. The other was made out of a poster and was sent for the interesting Green March stamp. 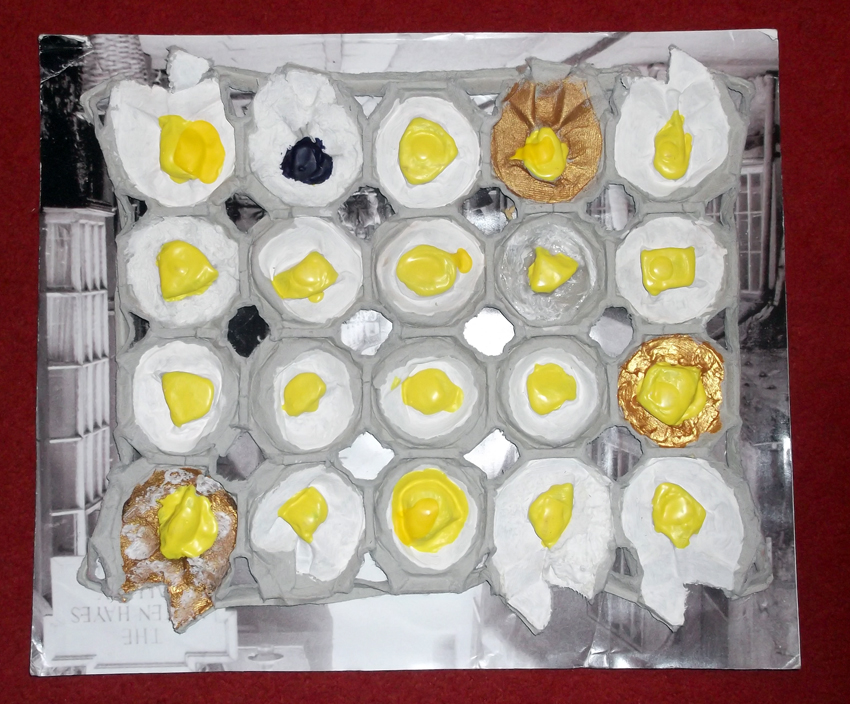 What next from Dean the in Seine artist? A cardboard egg tray full of fried eggs arrived in the mail today. Some of them looked a bit off, there's a black yolk, three gold whites and a silver one. Is this a code of some sort? Does he expect me to make an omelette out of them and send it back?

On the other side, pizza with a pun.…