Four cool pieces from around the globe. First off a zen cookie from Mim in Virginia with a sort of blackboard effect. Unfortunately I had to drop out of my Asemic Writing class at the community college so I can’t quite decipher the writing and it may not be writing at all. It could be a bat hurtling through space having lost its radar in the stratosphere. But there is definitely a cookie in there. Thank you, Mim.… 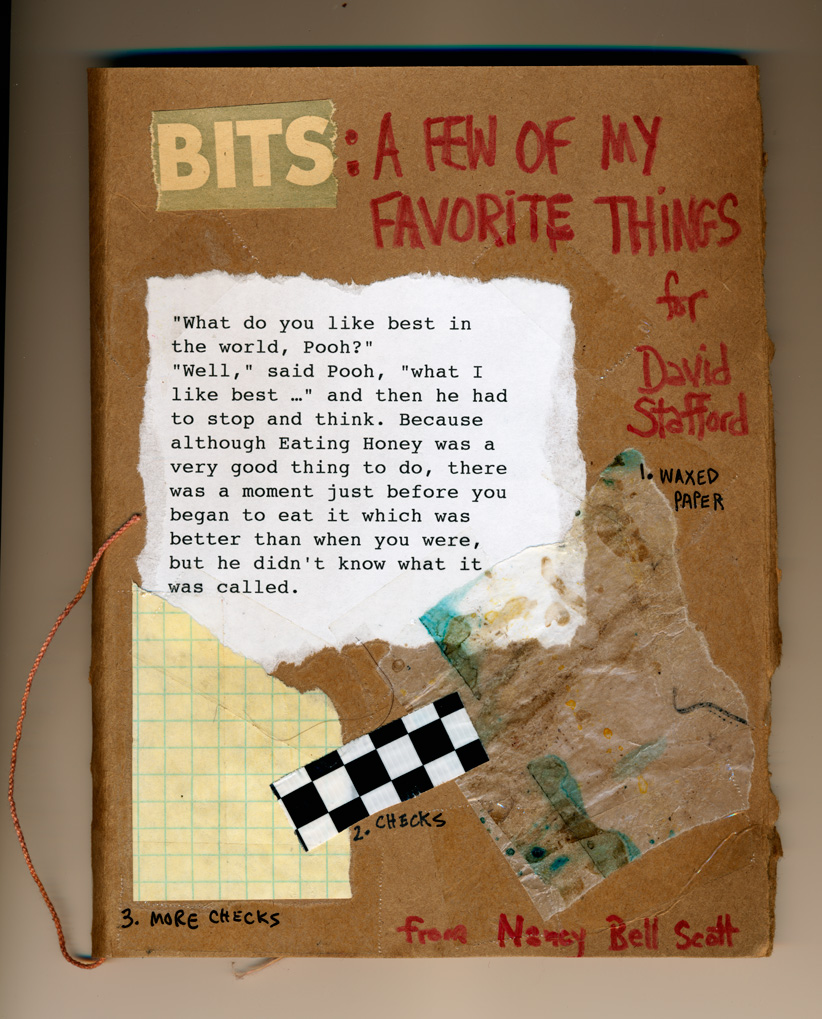 Christmas arrived early this week in the form of a brown paper package not tied up with string but it certainly contained a few of Nancy Bell Scott’s favorite things. 38 of them, in fact. All carefully annotated and laid out like specimens from a Library of Congress collection. There are bits of string, rust, a rock from Mexico and Nancy’s drugs of choice:…

Dean Marks, merry prankster in Paris, sent me this gargantuan card. The scans do not convey its heft, supplied by a piece of plexiglas from a fallen traffic signal. In other words, industrial strength trashpo or Traffic Light from the City of Lights (they can spare one). Featured on the front is another of Dean's barcode creations to which he has affixed my head. Aside from aiding and abetting my cult, the entire thing resembles a costume drawing for an Ubu Roi update. The barcode booties…

It's not often we receive full frontal nudity in our mailbox here on Alamo Drive. Especially when it concerns the mail of the species. But KDJ goes boldly where others fear to tread and besides she's merely recording an actual historical event: The Day Johnny Walker Left His Pants at Home. Much like Lady Godiva's famous ride without her extensive PR team, Johnny Walker's Walk, as it's known in the deep, deep impenetrably deep South, was one of those watershed events that turned the tide.…

Sprung from the head of Zeus! Yet again. Another sterling wunderwerk from Skybridge Studios arrived yesterday. Dressed in an understated gold lame envelope festooned with vintage southwestern stamps, this four panel folding book has kind of a hayseed feeling about it. For one, SB has been pushing the envelope of their printer again: all of the text is printed on thin wafers of wood. I’m guessing mahoghany veneer but I could be dead wrong. Anyhow this rusticity is lightly echoed in the nine…

Well, this is what I get for assuming that Cheryl had wrapped her Desk Set in a mere scrap of paper. I was filing away recent incoming when I unfolded this wonderful and huge drawing / mixed media painting featuring three of the demons that live in the watermarks in my ceiling. A sinister all-purpose trio and by the way, rendered with exactitude based on a few notes I scribbled to Cheryl. How does she do it? I suspect KwaZulu sorcery. Thank you, Cheryl and forgive me for my laxitude (is that… 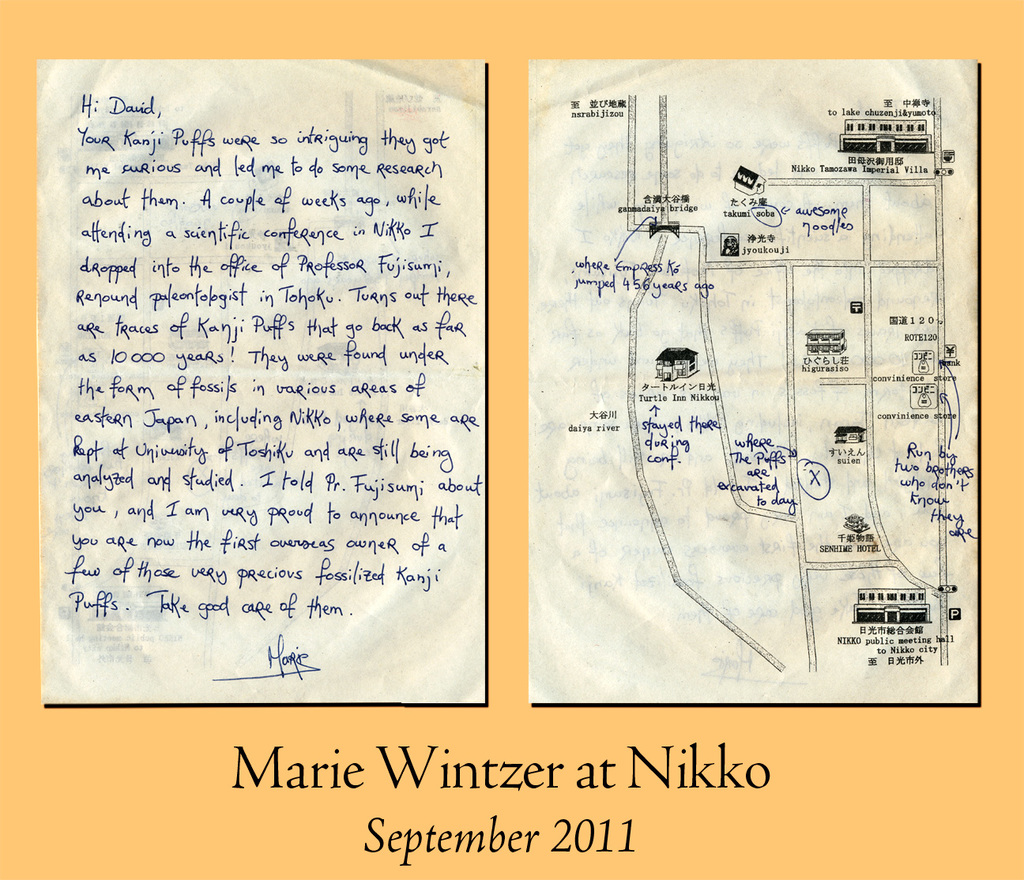 Marie sent me this characteristically droll and precious book of fragile Japanese ephemera. Inside a delicate wrapping which looks like a catechism or a primer, is a comic book for which Marie has supplied helpful translations. 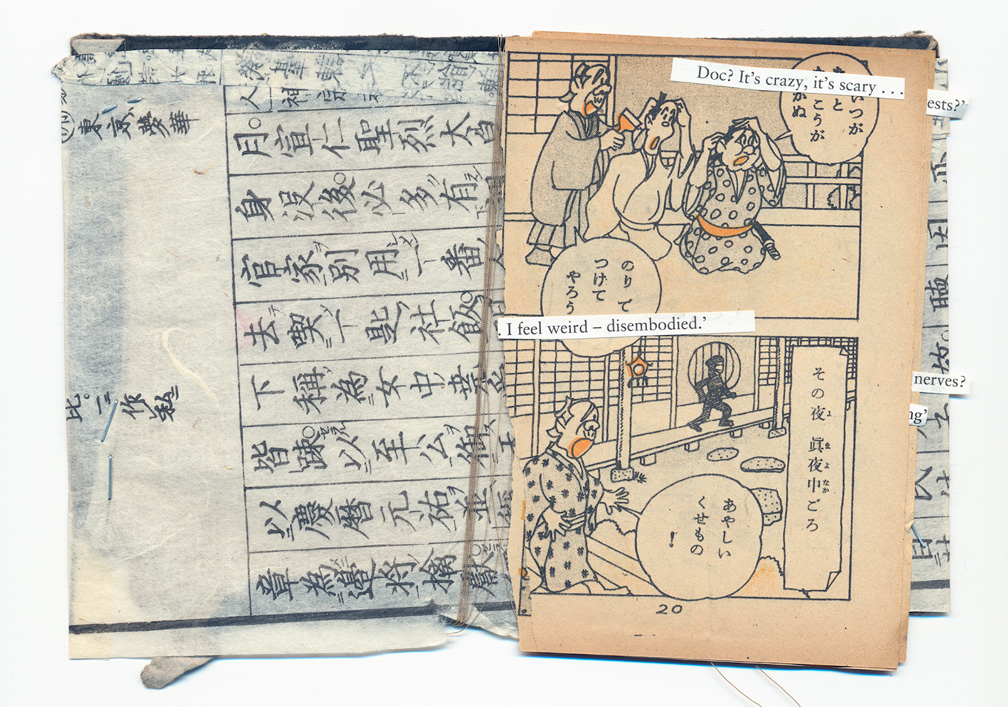 There's a lot of this going…

I've spent a lot of time running down our Postal System for a variety of reasons. Now I must take it all it back because of a remarkable thing that arrived last week. Diane Keys of Elgin, Illinois (home of the infamous Elgin Marbles) (hey, when I make a bad joke, I flog that sucka till I can hear the spleens ringing) Anyway, I arrive home from a hard day at the orifice and what did I find?

Why I am not an Intellectual

Received this yesterday in my email...

We assume that moving away from both self-reflexivity and social representation, leads to pure formalism. Hassan Khan confronts this notion through his use of medium, presentation formats, and the creation of partially flawed conceptual systems. Khan will join Sohrab Mohebbi in conversation to consider the play of conceptual…

I leave town for a few days and what happens...

My mailbox is crammed with stuff. Over the past five days I received work (and money!) from Katerina Nikoltsou, Lisa Iversen, Jon Foster x 3, Miguel Jimenez, Angie Cope, Bethany Lee, Laura Podob, Douglas Galloway, Cheryl Penn, Helene Lagache and Jen Staggs. All of the work has been posted in the photos section. Thank you so much, everyone.

A Book My Friend jaye and I made

Jaye and I have been sending mail across town now for three years. This is a collection of the first year of our correspondence....