Hi I am new here because by chance I saw your question. I have used Fontographer to create my own fonts from drawings and it is easy and free. It will work with W7, I think. You need a painting /graphic program to create tiny drawings of each…Continue

Adapted from Wikipedia Asemic writing is a wordless open semantic form of writing. The word asemic means “having no specific semantic content.” With the nonspecificity of asemic writing there comes a vacuum of meaning which is left for the reader to…Continue

Can ideas like this be included in the asemic type of development?Jazzy script in a kind of shorthand notation?Continue

The Push and Pull of Graffiti

I am always fascinated by the art that develops when the Graffiti Artist tags a blank space and the person who hates Graffiti covers it up ...Tag - Cover-up , Tag - Cover-up etc...Continue

Wondering if people in this group have any recommendations for (hopefully free!) programs out there that convert our stunning characters into truetype fonts? (I'm using the 2014 Long-Term-Support version of Ubuntu Linux and Win7 operating systems,…Continue

You need to be a member of Asemic Writing for Mail-Artists to add comments!

I was looking for it

That's what I thought too, Bruno. You just have to extend asemics to include haptic and object poetry. It works for me. Isn't Lost & Found Times amazing? John Bennett was doing this stuff before most people in the USA knew it had a name. Back in the day, I was afraid to submit to Lost & Found because I didn't think I was good enough. Probably wasn't.

I thought choosing canzone was interesting for "canzone for plywood." I forgot what the form is in poetry and had to look it up. Like a madrigal, which would mean a heavy use of repetition. Here's from Wikipedia:

Literally "song" in Italian, a canzone (plural: canzoni) (cognate with English to chant) is an Italian or Provençal song or ballad. It is also used to describe a type of lyric which resembles a madrigal. Sometimes a composition which is simple and songlike is designated as a canzone, especially if it is by a non-Italian; a good example is the aria "Voi che sapete" from Mozart's Marriage of Figaro.

The term canzone is also used interchangeably with canzona, an important Italian instrumental form of the late 16th and early 17th century. Often works designated as such are canzoni da sonar; these pieces are an important precursor to the sonata. Terminology was lax in the late Renaissance and early Baroque music periods, and what one composer might call "canzoni da sonar" might be termed "canzona" by another, or even "fantasia". In the work of some composers, such as Paolo Quagliati, the terms seem to have had no formal implication at all.

Derived from the Provençal canso, the very lyrical and original Italian canzone consists of 5 to 7 stanzas typically set to music, each stanza resounding the first in rhyme scheme and in number of lines (7 to 20 lines). The canzone is typically hendecasyllabic (11 syllables). The congedo or commiato also forms the pattern of the Provençal tornado, known as the French envoi, addressing the poem itself or directing it to the mission of a character, originally a personage. Originally delivered at the Sicilian court of Emperor Frederick II during the 13th century of the Middle Ages, the lyrical form was later commanded by Dante, Petrarch, Boccaccio, and leading Renaissance writers such as Spenser (the marriage hymn in his Epithalamion).

Hi Bruno, I did call you sometime back. We were reacting to John Bennett's "canzone for plywood." It was along the lines of found material and asemic writing. I think the furor is over. This is John Bennett's piece I pulled up from lower down the stream: 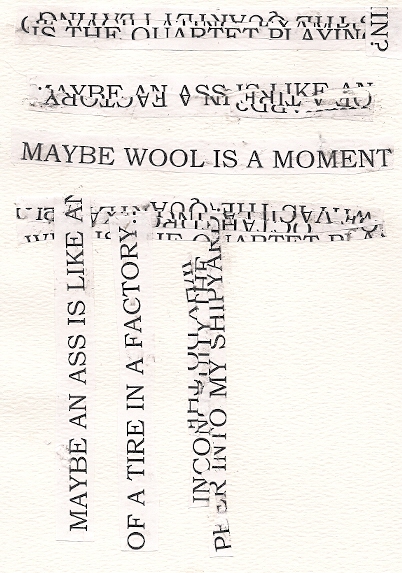 Comment by DKULT on March 22, 2011 at 2:10pm
I LOVE THAT eduardo. Book of shadows sounds like a great mail art call. Magic is in the broom of the rider:)

Comment by DKULT on March 22, 2011 at 12:29am
I don't have a source, but I always liked the theory that language was developed as a method to hide true thoughts and feelings as people were too transparent otherwise. I guess haptic asemic synaptic writing is a return to a more intuitive means of communication

Comment by De Villo Sloan on March 21, 2011 at 10:57pm
Oh, I meant it DOESN'T replace anything; it expands it. Thanks for the "Lost and Found Times" info - classics indeed. I feel like a Silly-man (if you know what I mean, wink, wink). falling back on this kind of critical perspective, but I don't know how else to explain "canzone for plywood."

Great stuff, all of it - I'm back to "a canzone for plywood." We aren't under the jurisdiction of Sandpo here. No ministries or expulsions, no consensus required for that matter. DK, I'm glad you like the organic photos. I'm personally opening my mind to the idea of found-haptic-asemic writing - I don't know what else to call it. This does replace anything; it expands it.

My personal take on "canzone for plywood" is that it could be read as the human function of creating language. The wood represents words. The sequence of the wood represents syntax. Created in wood and asphalt, they comment on the materiality of language. Do you know what I mean? It's a natural human tendency to arrange things into linguistic structures. It's a human tendency to try to "read" things that naturally or randomly occur in the environment.

Remember this is coming from a guy who just cut up his pants and mailed them to an art show.

In addition to the more traditional kinds of asemic writing we're seeing here, I'm going to seriously consider the potential and possibilities of what John's posting. I don't think anyone else has done anything like it yet.

Comment by DKULT on March 21, 2011 at 10:29pm
trying to understand John Bennett's writing once made my head explode. I'm finding these organic photos very soothing John. DVS, destruction is good--it just gets a bad rap