YOU are invited to contribute your VISUAL POETRY to a new COLLABORATIVE MAIL-ART BOOK PROJECT coordinated by Cheryl Penn (South Africa) and De Villo Sloan (USA) at the IUOMA.

Theme: Create a visual poem or series of visual poems that are an homage or tribute to YOUR FAVORITE VISUAL ARTIST (sculptor, painter, collage artist – perhaps even another visual poet)

If you are not a member of the Collaborative Book group, please join if you want to contribute to the book. Leave a message in the comment stream expressing your interest in participating in the project.

FURTHER INFORMATION: Specifics about the project will be posted in the new group.

WAITING LIST: We encourage people who want to participate to add your name, even after we reach the 20 mark. Experience shows that the line-up is "in flux" at the beginning.

The book page format will be the same as for the Asemic collaborations (1-3) - 2 sheets folded A4 - ie 8 sides. You will need to make 20 copies and post to each person on the list - the addresses will be added to this discussion once we have got confirmation from all the participants. Again - these collaborations only work if everyone commits and endures!

It is devoted to my friends

To artists - to men to angels.

Young lady Elza and Bonn have gone from the small town N city on art fair in the spring morning. On the journey they stirred much and had fun in a presentiment of interesting and significant event for them. As characters of maidens didn't differ inertness and to indifference to the world surrounding them with them, and there was that fairy tale filled with joyful both sad impressions and events to which each of them as fiduciary from each other aspired.

In one of palace halls, the rare collection of books everyone of them has been presented was in one copy and everyone bore the magic, refined world. But Elza and Bonn have chosen this more similar to the steel house, with mechanisms, windows, door and a magnificent spiral staircase, as if carried away in heavens.

As it is got on similar actions, to take in hands wonderful exhibits it is impossible, but not for our heroines. The book so has carried away, as if called "Open me!". The temptation was great, young ladies have opened the book, and here all has begun: was started turning, has mixed up, has begun to grind.

Having slightly opened carefully eyes, on the sly coming to the senses, from so strange change in a site, young ladies have found out that are, not outside and have control over the book, and indoors.

The improbable fear and horror has captured captives, but with character of adventurers and researchers of all live and lifeless too, the fear was replaced with curiosity and excitation. What is such?! Having forgotten about house and vain affairs, girls with a head have rushed to study the new adventure, and to study was that believe!

The house was similar outwardly as it is necessary on a conventional dwelling, but strange. Doors, windows, and a ladder all live, breathed, called, fussed, and different music everywhere spread. Having considered a magnificent ladder from copper inlaid color, murano glass with moving spheres, as if the planets rotating round the galaxies. All weaved from copper and steel fibres as the magnificent liana rose to heavens, branching on which floors was much.

And here the choice, some doors in appearance all is put are identical, and that behind them a riddle. Young ladies have exchanged glances and have risked to open the first. The stunning garden with marvelous plants was presented to eyes. Walking a floor to a garden, enjoying seen, have found out the gardener very gently watering and admiring of two improbable beauty and complexity orchids. It so has been keen on actually grown up creations that hasn't noticed, gatecrashers. Girls still any time have observed the owner of a marvelous garden and have hastened to leave to new unexplored rooms.

All is very strange and not clear in air pressure, an empty room is felt. But presence of whom that is sharply felt, someone observes. Elza it became terrible, she has looked back and has seen behind the back huge, steel eyes, motionless, studying, paralyzing. Eyes - of a predator observed, the predator didn't appear. Roofing felts waited, roofing felts played directing horror the sight. Girls have run out from a room.

Having taken breath, having sat down on a wonderful ladder, having listened to a few music. Having calmed down, having lost fear, and vigilance have risen a floor above and have entered into the following door. Huge heavenly color the room which does not have borders, and a ceiling has blinded light covered sets of flying angels. Them so was much! angel of an unreal spiritual power and beauty, appear, that they always with you, but is uncontrollable and almost imperceptible. They are so thin, gentle and vulnerable That in bondage perish, therefore depart. Here they were free. Two archangels as if descended from V.Erko's illustrations and gently took to Elzu and Bonn in hands as if two multi-colored humming-birds with surprise and not without pleasure began to consider have flown up to young ladies. Behind that carefully them have lowered on the earth and have departed to the colleagues, clapping huge steel wings. Enjoying their soaring and without wishing to leave this wonderful place, nevertheless it was necessary to leave not to break another's freedom and territory.

Room following: Arabian вязь, gold, luxury. In the center the Muslim man and two guries watering with an unction and the fragrant oils, showering with petals of white lilies of the mister. All is very languid, sensual, beautiful, almost motionless. Music and a smell of cherry tobacco flows, the mister smokes a hookah.

The forbidden room as didn't differ outwardly, as well as all previous but who knew who knew.

Young ladies have entered, and the door with a gnash has slammed, and infernal mechanisms have started to work, all was started turning, has twirled, has turned over top a bottom and the most awful show has begun. From all cracks, harpies from everywhere began to take off. One of them the most disgusting, with fetid breath vomited from an ugly belly of black disgusting toads. Elza has got. As the girl tried to hide, the harpy found it and tried to tear off a piece of a live flesh. The phoenix cried, in game has burned down smothering, and a body, there were ashes... The Attack was long and exhausting, appear, there is no end. But when forces have left maidens, have appeared valkires and have properly pulled about harpies. Still any time the harpy vomited damnations and toads, then was gone. Though were in time Bonn and Elza to run out from a forbidden room, all in the house has changed, the box of Pandory has been opened.

All has mixed up, the wonderful ladder didn't aspire any more on heavens, and swam in air turned from above in a bottom, doors too swam and moved, as it was necessary for them, instead of music cacophony. The small window has been slightly opened, it was necessary to reach only there and to flutter out. The governess has got out without effort, Elza having fluttered out, was hooked by a foot about a roof of the house and has failed the person downwards about a stone floor. Strongly расшибя a knee the girl has begun to cry.Её attention has distracted not clear sound as if sticks touch, having seen strange object rushing about in an agony. Many wooden sticks, on sticks are written words, mixed among themselves and связанны by threads, from that and noise such strange. Elza has caught this strange piece and began to read that is written on each stick: GAME in to break. Has caught, has played, has broken, has put in a box. Has got, has looked, has broken completely... Also has released lame поломайку. HOUSE with us. Elza it became a pity the poor fellow, and it has carefully unclenched fingers and has released поломайку being afraid to cause to it still sufferings. To it it became ridiculous for the broken knee and tears. And what Bonn? Elza has risen, has shaken off and has seen that they and didn't leave the house. The governess sat on the turned ladder in drowsiness and amazement. Elza has asked: - "That we will do? We captives?" - «I do not know, I do not know, I so many times in the life didn't tell a word I do not know" - whispered released Bonn. - “How to get out to us of the house, doors were mixed, the ladder is turned, as well as where have entered not clearly, to pass a way anew, having opened on a new door, means to endure all again” 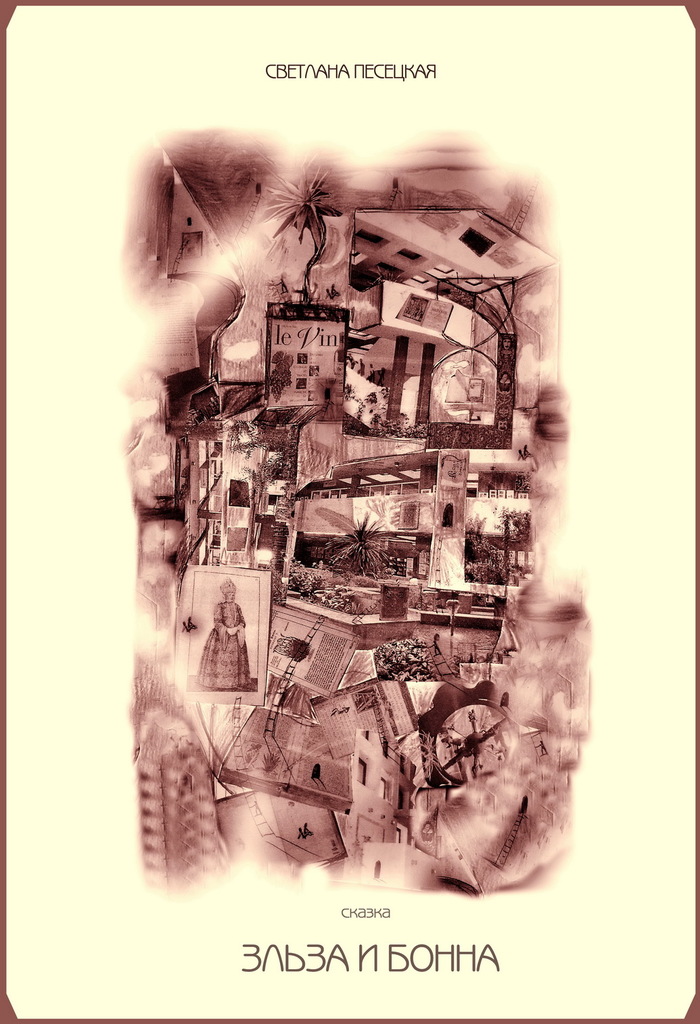 It is devoted to my friends

To artists - to men to angels.

Young lady Elza and Bonn have gone from the small town N city on art fair in the spring morning. On the journey they stirred much and had fun in a presentiment of interesting and significant event for them. As characters of maidens didn't differ inertness and to indifference to the world surrounding them with them, and there was that fairy tale filled with joyful both sad impressions and events to which each of them as fiduciary from each other aspired.

In one of palace halls, the rare collection of books everyone of them has been presented was in one copy and everyone bore the magic, refined world. But Elza and Bonn have chosen this more similar to the steel house, with mechanisms, windows, door and a magnificent spiral staircase, as if carried away in heavens... Happy Monday Morning to all the IUOMA VISPOETS. I hope you’re feeling inspired at this exciting project – I for one am. Have you decided on a theme – an artist you are inspired by ? Should we tell or not ?

Dear visual poetry comrades, I am not attempting Shameless Self-Promotion (SSP). I posted a blog about visual poetry today that contains some ideas (and examples) of vispo to the best of my knowledge. I hope it might be helpful to the project. Otherwise, I'll go back to the IUOMA Self-Absorption Ltd. group.

If you would be on Facebook I would reply with I LIKE! By the way the afterword on a new collection of visual poems by Rea Nikonova is quite interesting (written by Bridget Penney, UK) If you cannot read scans, let me know, I’ll mail copies Do we need to be friends for me to see this blog?

Nooooo, still thinking (about Gerhard Richter) ... I can't believe that you are already ready!!!