January 17, 2016 - This is the second part of a posting that documents a large parcel of material received from visual poet Jim Leftwich in the Fall of 2015. Here is a link to Part I:

This installment focuses on pieces that can reasonably be considered Trashpo. In 2005, Jim Leftwich created a small group of pieces he named “Trashpo.” These inspired a movement in mail art which has gained momentum for the last six years and that has attracted the attention and participation of a wide array of artists and visual poets. Here is a link to one of the original 2005 Trashpo pieces by Jim Leftwich:

Leftwich has no official role in the Trashpo movement or DKult (an organization whose members are devoted to the creation of Trashpo). He does, occasionally, produce work that is clearly in the spirit of his original Trashpo. The pieces documented here, I believe, exhibit the characteristics of Trashpo and should be of interest to trashpoets and Trashpo fans. Leftwich has done contemporary work that explicitly addresses Trashpo. I have documented some of this work, including the “Trashemic Essays”:

A large collection of Trashpo-related work by Leftwich can be found here:

Many thanks to Jim Leftwich!

Also a I just noticed that in the blog a link to "found incoherents trash" by Jim Leftwich was missing. I have restored the link in the blog and here:

This is a large collection of Trashpo=related material.

Thanks res, I don't want people to think DKult would use Erica Durante as a "useful tool" or that her enthusiasm is greater than it is in reality. She does produce Trashpo, yes, in the Old School fashion and she holds these various leadership positions she is assigned without complaint and with a level head. For Kulters, these characteristics are rare.

She does other things too. For instance, I just saw on FB an amazing sweater she knitted for a chicken. Apparently she makes garments for poultry. No kidding. It was fine work and very interesting.

Here is a Trashpo work by Erica Durante: 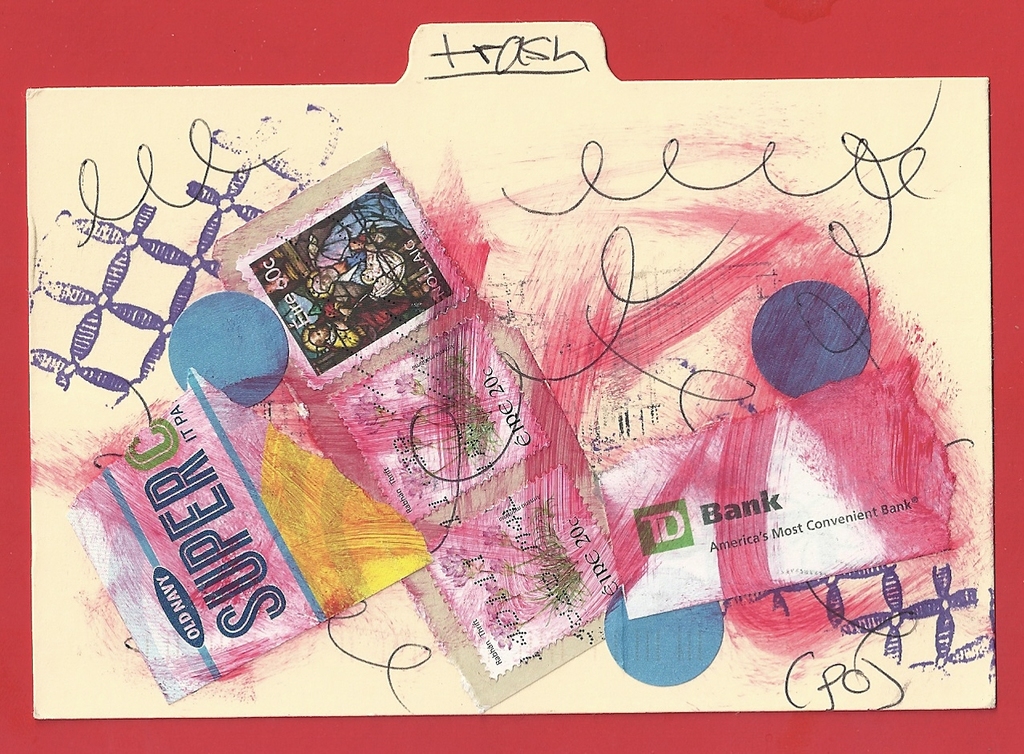 Also res, yes Jim & DK tend to do the original anti-art Trashpo. But obviously the "Aesthetic Trashpo" school has advanced considerably. Claire aka Cleo has done a lot on the aesthetic side. Those people tend to look to Kurt Schwitters more.

There is also a Post-Pop strain in Trashpo. That's where Richard Canard's cereal box pieces come in.

That's true, now that you mention it, if that's what you mean.

Erica is President of DKult New Jersey (DKULTJER). She handled the situation very well when I tried to deport Meeah Williams from the NY chapter to New Jersey.

Another interesting thing is that Erica is President of DKULT-France (DKULTFRA). We can't establish a legitimate chapter in France. They don't want it. A certain individual from France poisoned the well, so to speak. So we made DKULT France part of New Jersey, for now.

Hi Richard, for something so simple, Trashpo generates a tremendous amount of discussion. I would suggest anyone trying to understand it look at the work of the "Old Masters" (the originators) Jim Leftwich, Diane Keys and you - Richard - especially your cereal box pieces.

Your vispo comment is "right on." People say: "Oh, Trashpo is just making mail art with found materials." Actually, Trashpo is different because it is a form of vispo (visual poetry). The creator - Jim Leftwich aka Jesus Jim is a well-known and highly regarded visual poet. Ideally, the trash used will have some sort of textual element, although there are exceptions.

I like the leaf piece (an exception to the text rule) a lot as well. It points at the Gutai aspect of Trashpo and Diane Keys' favorite issue of recycling. Your average suburbanite likely considers leaves a form of trash. That is a powerful commentary, if you take time to think about it.

Thank you, as ever, for your insights.