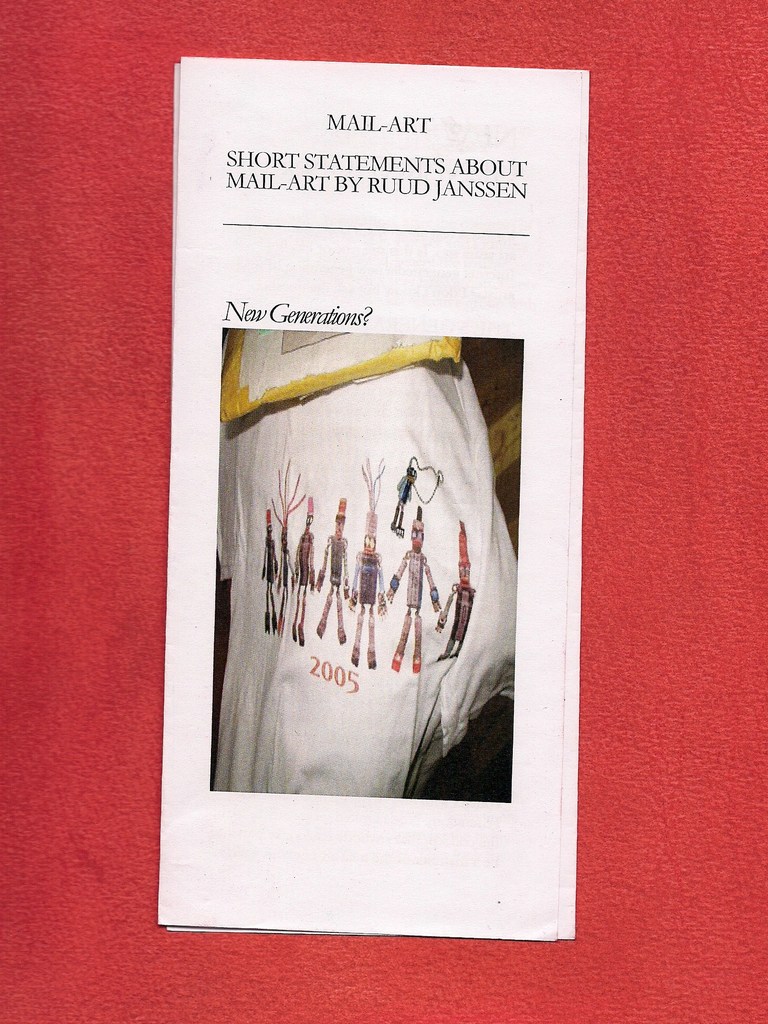 December 27, 2010 - Ruud Janssen sent me an envelope of mail-art last fall. I posted part of it here at the IUOMA. I saved this "New Generations" piece he wrote because I wanted to devote an entire blog to it. The closing of the year provides a good opportunity. This collection of short statements is a 2007 update of a piece written in 1996. It presents a clear and concise overview of different generations of mail-artists. I thought IUOMA friends, who have not seen this already, might be interested to see what generations they are a part of. I believe Ruud knew I was interested in the history, that I had a knowledge of some generations, but was completely in the dark concerning others. Being from the U.S., I somehow managed to be completely unaware of landmark events such as the Fricker and Ruch conference in Switzerland long after the fact. Here is Ruud Janssen's summary of the generations: 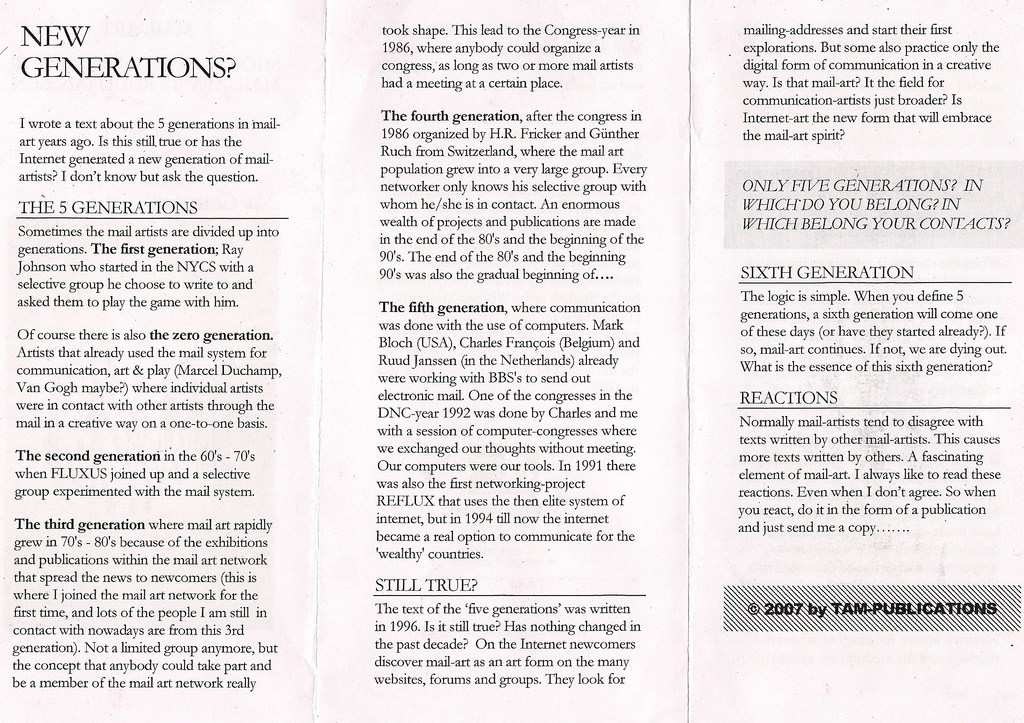 Based on demographics alone, I would guess many of us can claim to be third generation. I am personally very interested in understanding the first and second generations in the U.S.: What exactly was the relationship between Ray Johnson's group and the original Fluxus? Probably some serious overlapping. Here is the other side of Ruud Janssen's "New Generations" piece: "New Generations" also talks about a Sixth Generation. Given that three years have passed, I wonder if that generation and the things that define it are clearer today? He also alludes to the impact technology has had on mail-art, and developments in that area can be traced through the text also. I have found this piece extremely helpful and send a belated thanks to Ruud for passing it along with mail-art from the, now closing, 2010 season.

Comment by De Villo Sloan on December 30, 2010 at 7:02pm
Only Val could take postal systems to the level of political theory and make it yield. The Perneczky books are a good lead. I'm encouraged to hear there are more histories of the network. There certainly have been some interesting characters, and it's reflected in their work. Hi Bifidus. Yeah, at root, especially with global markets, there will always be a system for delivering "things," I think.

Bifidus and Katerina debtae the future of postal services. Let me make a small contrinution.

I think that as long as there is a 'Digital Divide' -- in which some people are on line, and others are not -- there will always be a postal service of some sort. Even when everyone is on-line (what a horrible thought!) and everything is digitised (even more horrible!) there will still be a societal need to transport goods (as opposed to services) from A to B.

We are the privileged, rich ones, part of the electronic First and second Worlds. But there are billions of our fellow human beings who do not have access to all the technology that we have, and most likely have never made a phone call or seen a computer in their life. In terms of (societal) evolution, they are today where our Western societies were, say, 150 years ago -- dependant on much simpler technologies to meet basic everyday requirements.

The future of the postal service can be looked at in two ways.

Nationally, it seems increasingly less likely that it will remain as part of a nation state's 'core business', and will be privatised. As a result of this, the universal postal obligation (mail delivered anywhere within a territory at a uniform price) is likely to be sacrificed  at the altar of Mammon.

Internationally, this will not happen in all countries -- most likely only in the richer ones that seek to become even richer. UPS, FedEx etc can take over the postal services in these countries, and co-operate amongst themselves along the lines of the original Universal Postal Union.

But some countries will choose not to go this route -- and remember that in many countries there is still not free and open communication, rather state censorship of as many forms of communication as possible (hence their problems of controlling the Internet). In this context it is seen vital to a state's interest to control not only what is said, written, broadcast, etc but also even what is thought, and what is sent by the post.

For an example, we need to look no further than the problems we have in sending Mail Art to China.

The cost of a single item of post is also important. I can afford to send 30 or so items of Mail Art a week because I benefit from the what I suspect are heavily subsidised and cross-subsidised rates of the French postal system (which is linked to banking, freight, and many other things). If I had to pay a realistic commercial rate, the price would be much, much higher, and I would be priced out of the system. 'Divided' in another way, no less.

Another example. It costs, say, €1 for me to buy a litre of milk at the local store. If I wanted to get my milk from a specific cow and have it bottled/packaged especially for me, it would be very expensive. But I don't: I buy 'universal' milk at a 'universal' price from a non-specific cow.

Stamps are like milk from the local store -- one price fits all even though it makes no difference if my letter is sent to the next village or the other side of the country. If the price of stamps was truly distance related, the economics of the mail would be very different...but the universal obligation negates this.

The State will not whither away, in spite of Marx and Engels' arguments. There will always be a State, and there will always be some form of postal service as part of this. If some national postal services whither away and become FedEx-type sevices, then there will be an even stronger need for the UPU (or a similiar body, but what's wrong with the one that we have got?) to perform the vital, postal, international function of moving letters, packages,postcards, etc from country A to country B.

Sorry that was so long! The End. Val

I call mail-art anything an artists pays the postal service to deliver to someone else, knowing the art will be somewhat altered by the cancellation marks, etc. The artist is also aware of the risk of loss, misdelivery, or wreckage that can occur. I think the postal service as a secondary art medium is the needed component to define mail art. Take a look at what I recently received from Laurence Roberts, UK: This missing postage stamp and wrecked address "adds" to the mail art. It is this random quality of art and the possibility of surprise that makes mail art powerful. This can't happen through Twittering or any other electronic way of sharing art, so I don't see how the next generation can call it mail art. As Lisa said, name it DCA or something.

That already happens. The main question is, "what do we call mail-art?". Are all communication-forms included? In the end-90 ies a lot of mail-artists dropped out because they didn''t like the electronic communication. What we see here on the IUOMA-platform is an electronic exchange just to stimulate precise mailings to each-other. The sending of digintal images is already done on several levels (You van just publish an image through your smartphone to facebook, and also twitter is integrated into this social network the IUOMA uses).

@De Villo Sloan : I have quite a collection of Cavellini here too. In the 80-ies the mail-art network was auite intense and included a lot of extreme countries and personalities. Cavelinni was one of them. In the new times with computer-communication a lot of artifacts from the pré computertimes are starting to pop up. Anothet try: Look for the digital publications of Géza Perneczky (lives in Koeln, germany).  He published several book documenting the complete network (70 till end 90-ies) and made the publications available online. Free for anybody to download.

Comment by De Villo Sloan on December 30, 2010 at 12:31pm
This provides the needed perspective that the global network now and over time is impacted by different political, economic, and cultural conditions of many nations, probably more than other artforms. I found a Cavellini piece circa from the 80s last night! TY Katerina for making me aware. My scanner is messed up. Will try to post later.

Just a few samples of what I received from Edgardo Antonio Vigo. He is a visual poet, and was very active in Mail-Art from Argentina. Also during the dictature, when his son was captured and probably killed by the gunta. I did an interview with him as well, available online and in bookform. Comment by De Villo Sloan on December 29, 2010 at 1:12pm
What a great discussion. Katerina, it's only now I'm fully appreciating the contributions of South America fully. Maybe the internet is helping us in this way. The web seems to be a benefit FOR mail-art as we know it now and what Ruud says about the 6th generation makes a lot of sense. I mentioned in an earlier blog the Black Mountain College people were influenced by Brazilian concrete poetry in the 1950s, for example, so I'm guessing some sort of international networks connecting "north" and "south" have been around for decades. In my own 3rd generation experience, when I started receiving from outside the U.S. it was from Germany and Italy. And I think Britain. We all have our favorites, but I remember Robin Crozier? I need to get back into the IUOMA archives group because my collection is still a mess. Thanks again for this great discussion,

Comment by Ruud Janssen on December 28, 2010 at 5:51pm
The sixth generation could be the new mail-artists who communicate in a digital way and discover the traditionam mail-art by 'snail-mail' and start doing that after reading about it in the digital world. So the oposite of the fifth generation.

Comment by Ruud Janssen on December 28, 2010 at 5:49pm
In South-America there is still Clemente Padin, who has been active for decades. Edgardo Antonio Vigo from Argentina also now finds recognition in the art-world and played a major role in mail-art.