Okay here goes another blogathon...This may be three weeks worth so it's quite a haul. First off....MomKat weighs in with three, count 'em three cards from the old country. Birthday greetings and a surrealistic collage that features a guy that is a dead ringer for a childhood friend of mine, Danny Cubiciotti who died at 27 so it's strange to see him creeping across the freeway. Thank you, Katerina 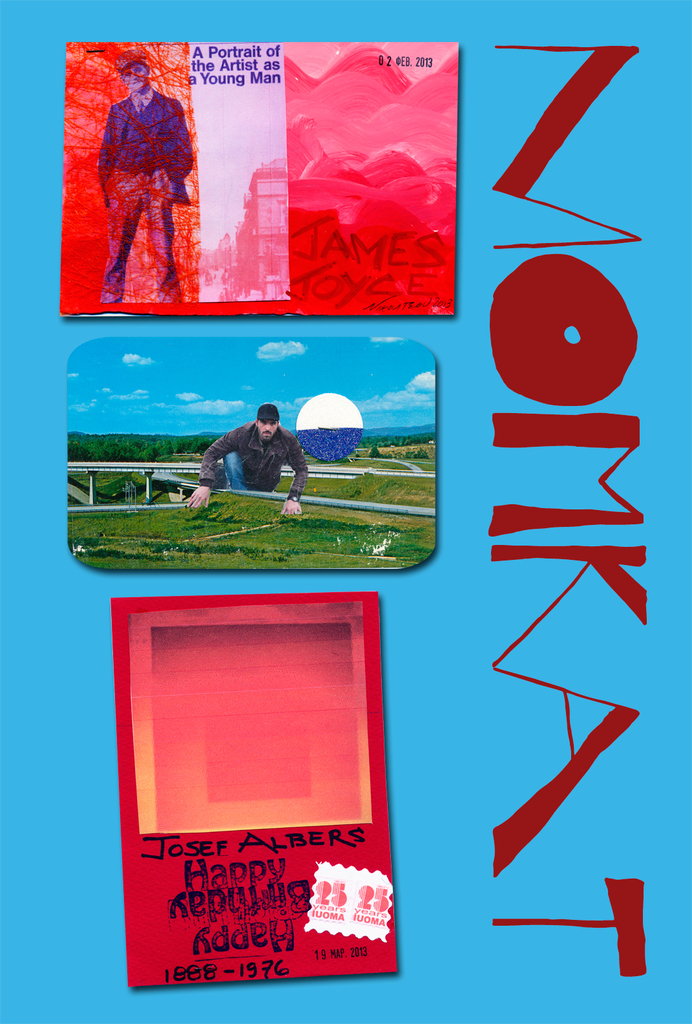 Next up: Thom Courcelle who sent me this beautiful envelope with Victorian fairy tale enclosed. Thanks, Thom. (The statue looks uncannily like me after my weekend at the DayveSpa). 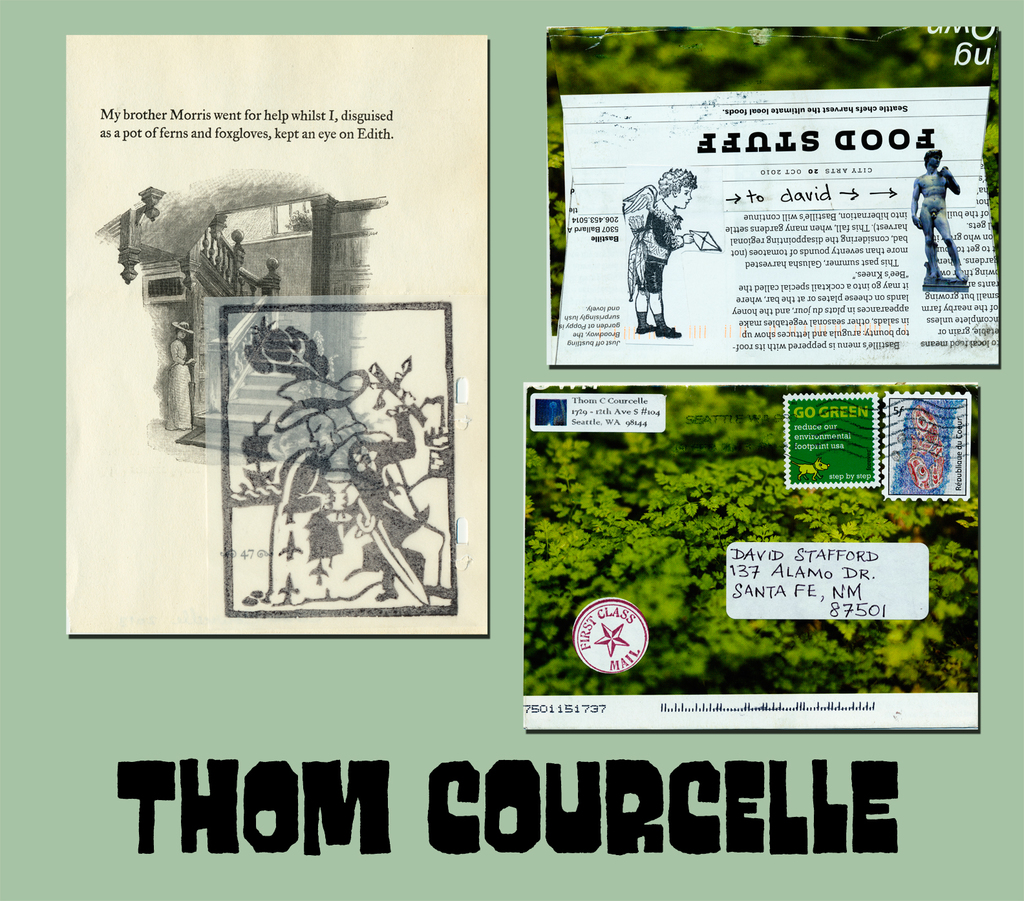 I received two lovely boekies from Marie Wintzer in an exquisite envelope which resembles a locked chestful of secrets. Inside two radically different boekies...one visual, one literary and both assembled with the care of the high archivist of the ancient scrolls of Hokkaido.

Here is The Ange Man's Ange Tale in which the text is pieced together in type and echoed in handwritten text which, by a strange alchemy, renders the collage into poetry or even epic tale. It's a sort of translation from concrete poetry into lyrical poetry and works quite beautifully. 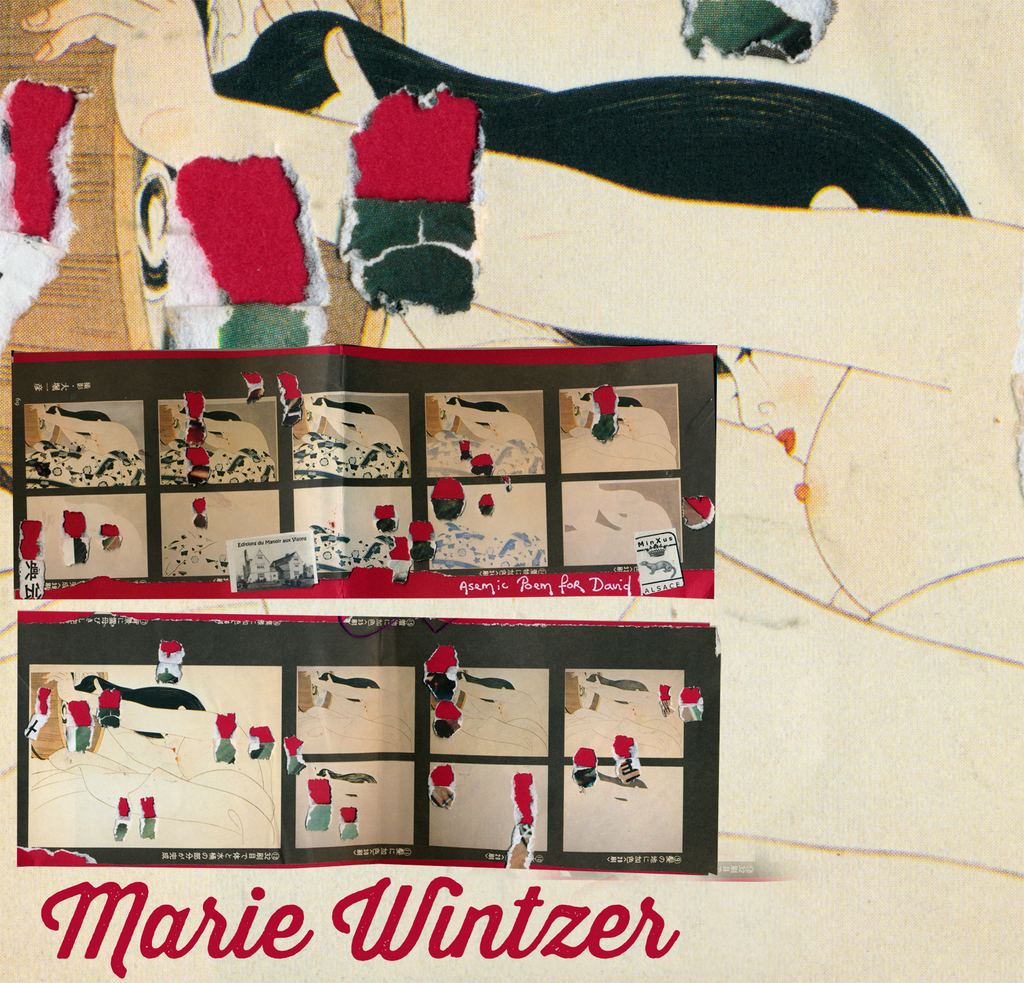 Diane Keys piles on the trashpo...Here we see the Chinese Food Takeout Trashpo which is chockful of signs and portents of which I have extracted the most important (see top of illustration). I have a vision of Diane scouring her neighborhood for flotsam and jetsam and getting a weird sort of rep. People start saving stuff for her, depositing their treasuresin her shopping cart as she wheels through the mean streets of Elgin. As always the trashpo is threshed out of the trash and reassembled  in its PROPER form as a vehicle of meaning from the fourth dimension. Thank you, Diane. 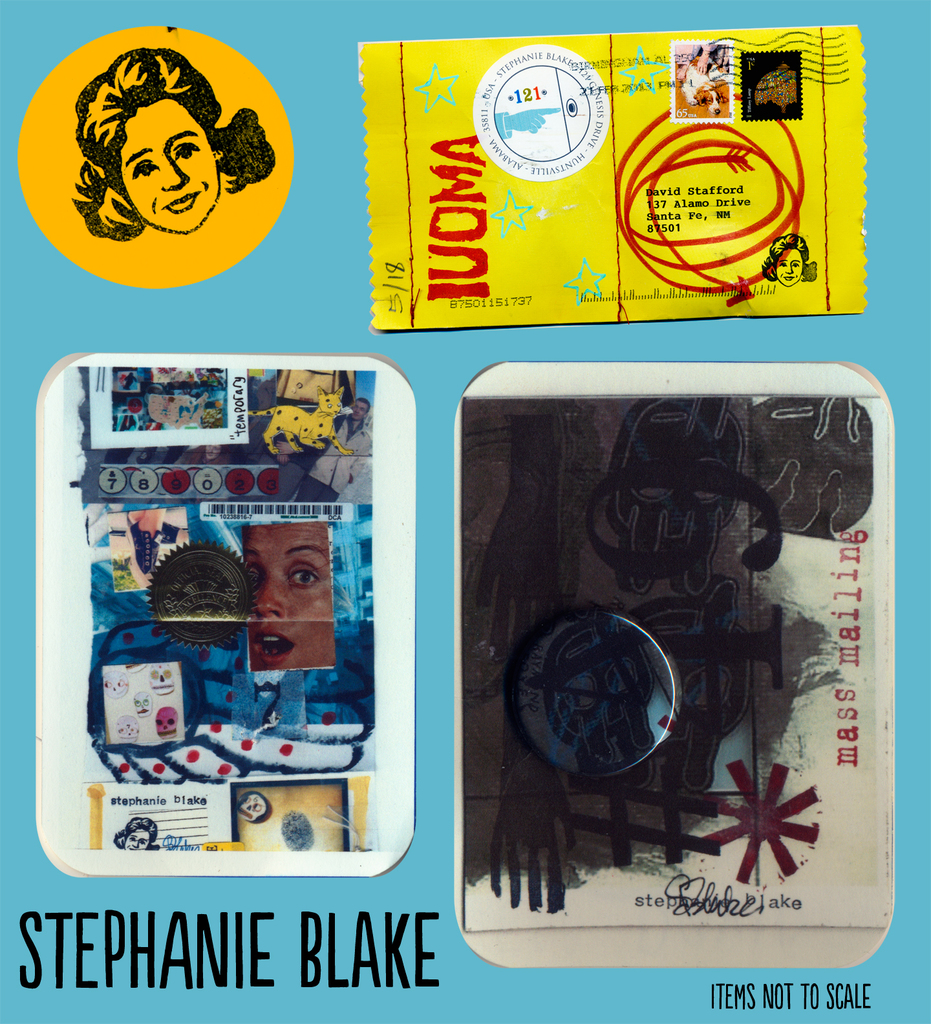 I have to confess that I didn't open this bright yellow envelope for a week. Hey, it's sewn shut and it felt like opening it would violate the seal of the royal alabama masonic temple but when I saw the ATCs appear on the IUOMA site I figured I was supposed to rip it open...What can I say: I'm a late bloomer. The treasures were inside but I sorta liked the inviolate envelope for its own red threaded sake. Here we see a moon rising over Birmingham with the Blake Ray fixating it with a serene smile. Thank you, Stephanie. Nancy Bell Scott's collages inspire something literary in me which is not always a good thing but here Nancy has provided her own narrative for her piece. The off-ground police, for those not in the loop, are the cops that go around making sure nothing untoward happens in the offground areas: balconies,  rooftops, ladders and the like. You'll have to get out the zoom and enhance features on your computer to observe the guilt in the trespassers above. But it's there alright. Thank you, Nancy. 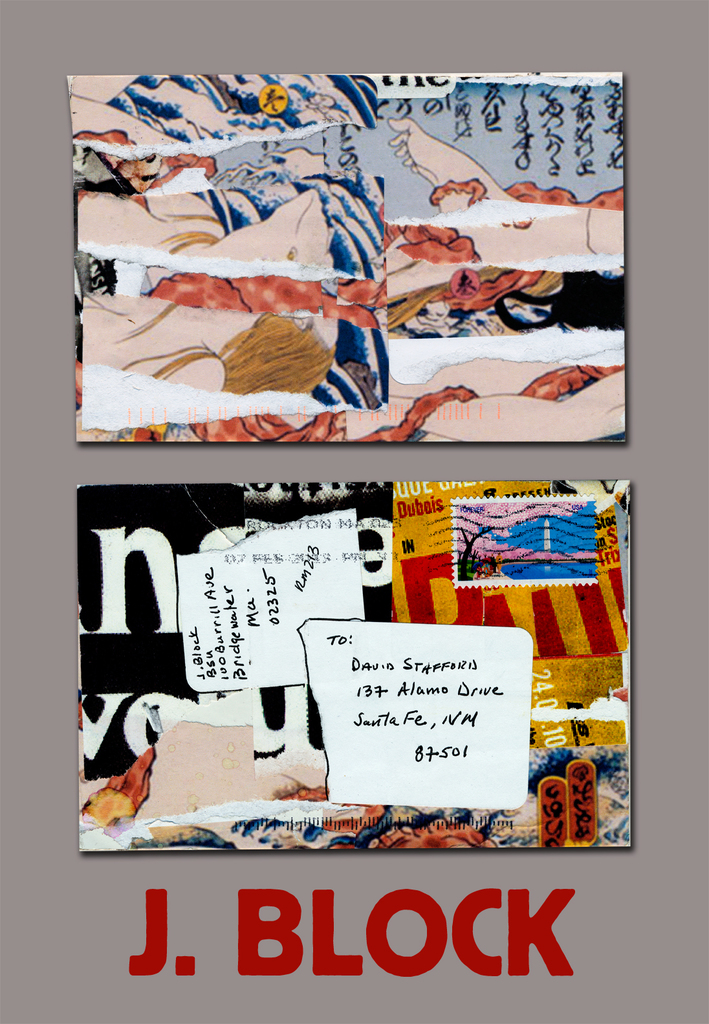 Marie's not the only person who is riffing on the Japanese woodblock. Here J. Block has sliced and diced the floating world until it becomes something new. I'm christening it "Dames at Sea" or "Ripping a Hokusai a New One." God, I can be sooo crude. Forgive me, Fadder...and J too. Thank you, J. You'll be getting your Ann Margret soon. Nadine Wendell Mojica is another who has sent multiple pieces between blogathons...yikes...This last batch included several boekies that might be called post-modern lobby cards. One, includes stills from Do The Right Thing that be viewed as a storyboard or simply placed in the bathroom for a quick guest read. Love them Shags...for those who have never heard the Shag story it's worth a good google. Prepare to be waylaid for half a day. Of course, Nadine has festooned everything with drawings including a vivid reimagining of Commander Uhura as a blonde. Finally, Nadine wrote me the nicest note which had me beaming from id to ego. Thanks so much, Nadine. 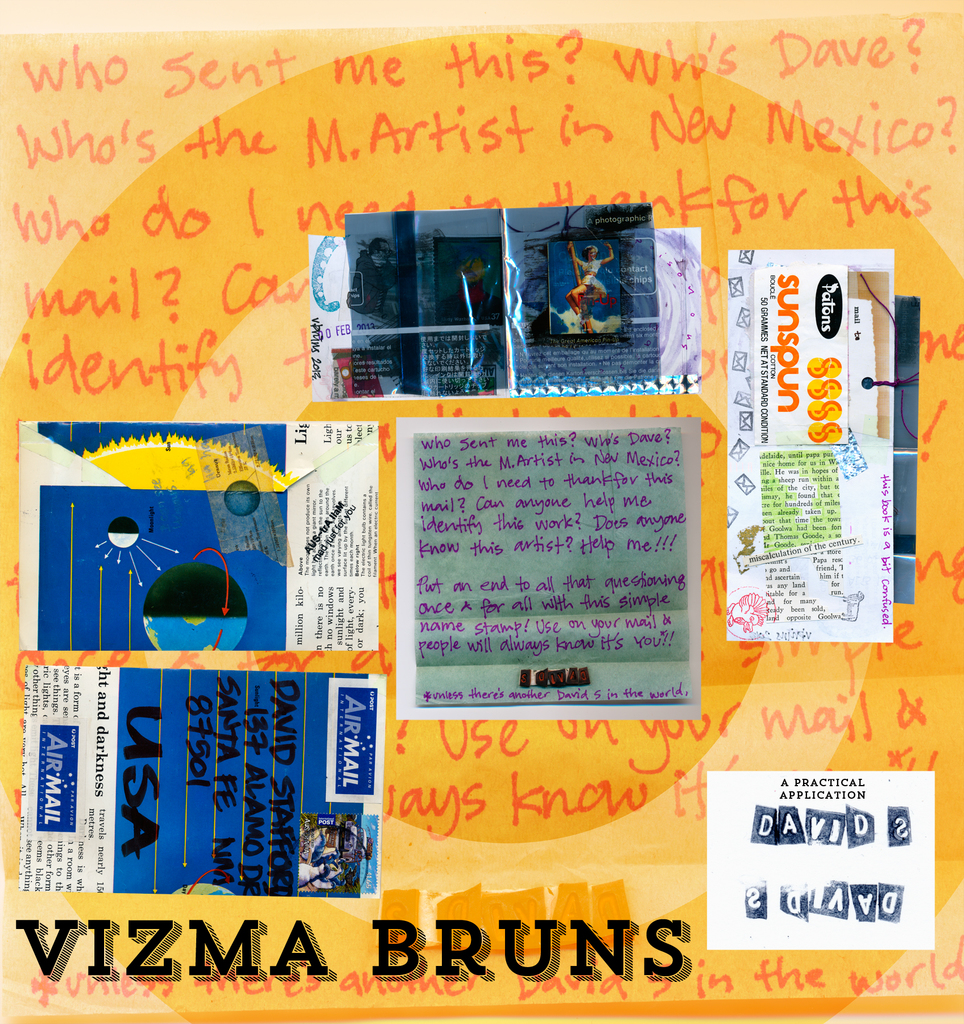 Like so many before her, Vizma was concerned that my unsigned cards might wind up mistaken for original Ray Johnson's floating eternally upon the postal sea. This fear is not without foundation. So she provided me with this rubber stamp (just beneath her note) for easy identification. Vizma also provided me with a boekie that I'm still plumbing for hidden meanings and sexual double entendres. My annotated list will be provided in future blogs. Thank you, Vizma. Something about Mim Golub's card put in mind of a cityscape at night. So think of this as the Macro and the Micro Mim Noir. You can almost smell the gasoline and hear the tinkling of martini glasses. Thank you, Mim.

Forget to call out Nancy's terribly unpc stamp...but scroll up and check it out.

Yikes, this went on like forever. Hope you enjoyed it. Thanks to everybody.

Wonderful blog, David, and thank you, Nancy, for the quote. Missing the right words here, it is very moving.

Thank you. Found it, and moving it is. Especially the quotes by John Franklin Stephens:

"...Here is John Franklin Stephens, a man from Virginia with Down syndrome who serves as a “global messenger” for the Special Olympics. He has written op-ed articles giving lucid voice to thoughts you may never have heard before:

“The hardest thing about having an intellectual disability is the loneliness,” he once wrote in The Denver Post. “We are aware when all the rest of you stop and just look at us. We are aware when you look at us and just say, ‘unh huh,’ and then move on, talking to each other. You mean no harm, but you have no idea how alone we feel even when we are with you.”

Last year, after the right-wing personality Ann Coulter sent a Twitter message about Mitt Romney and President Obama — “I highly approve of Romney’s decision to be kind and gentle to the retard” — Mr. Stephens wrote her a letter. “No one overcomes more than we do and still loves life so much,” he said, with such persuasive graciousness as to put other writers to shame. ..."

Sunday times...a week ago... I think it was by Lawrence Downes

Yes, the fate of some words is unpredictable (maybe stupidly unpredictable). Interesting timing here--I hope to find the editorial online.

Funny how quickly a word can become verboten...The Times had an excellent editiorial last week about the word "retard" which moved me to tears.

p.s.Yah, the un-pc stamp--really, what?! Mid-'60s? Part of an an ebay vintage lot, they sat here a year. You're the first guinea pig to receive it. Thanks for pointing it out. Now I can use them, money doesn't grow on trees, after all.

Really great blog ! featuring some of my favorite mail artists. David, your literary inspiredness IS always a good thing. (Your interpretation in Stephanie's blog was a hoot. I had to think about it for at least 14 minutes.) Your buddy in maine plans never to rob you of the chance again. Thanks to all ...

Thanks Rebecca and Katerina. I enjoyed putting it together....

Wonderful blog, David! You display us so professionally!

Glad to see the Birthday Mania cards arrived, and you like