GUESS WHERE I HAVE BEEN APPOINTED ARTIST-IN-RESIDENCE??

Hah! I guessed it! Not as descriptive as Richard, but then who can top the fabulous R.C., but me and Heleen did Well!

Anyway, ignorance is bliss (I've been told many times, many times)

Apologies to Our Dear Leader for not clearly following all his venerable comings and going. And to Vizma, Gallerie Serencia and of course to Trouble for all of the trouble. One thousand prostrations and a freshly swept studio floor. If I knew more, I could only know less.

Again, great Dan...but Our Leader wishes to inform you that the pictures in 'Herman Residency Moves Back Home' are not of his home, but of the Gallerie Serencia where he was earlier an Artist-in-Residence (before he got chucked out).

Our Leader also wishes to inform you that VMH has a Studio and has posted pictures of this in His Photos.

Last, and to set the record straight, Our Leader wishes you to know that VMH posted photos a coupole of years ago of 'His Workspace' in a Group that Vizma set up. 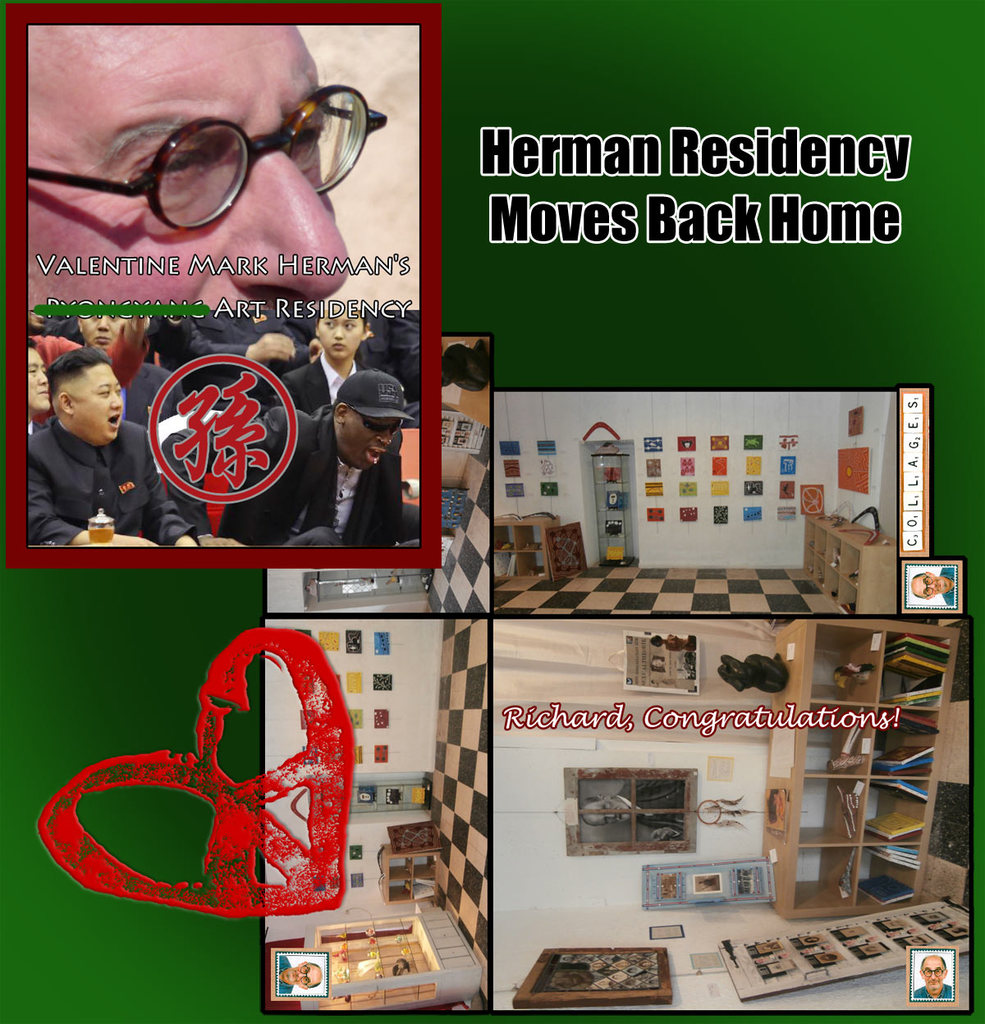 REPORT OF THE OLD FOUNTAIN CONCEPTUAL ARTIST AND WRITING SYNDICATE

SELECTION OF AN ARTIST-IN-RESIDENCE 2015

No other Members of the Syndicate attended or sent their apologies (probably because they were not informed of the meeting).

Nominations were invited for the position of Artist-in-Residence, 2015. One was received, from Valentine Mark Herman.

The meeting decided to put this candidature to a vote, although Bianca had falled asleep by then, and Trouble had gone out to chase some leaves.

The vote duly took place, and VALENTINE MARK HERMAN WAS UNANIMOUSLY CHOSEN AS ARTIST-IN-RESIDENCE, IN HIS OWN RESIDENCE, FOR 2015.

He agreed to take up his Residency from the start of 2015.

The meeting ended at 14.04, when light refreshments (wine and croquettes) were served to the attendees (who had woken up and stopped chasing leaves)

Speaking at the end of the meeting to the large media gathering, Valentine Mark Herman said, "It is a great honour to be chosen as Artist-in-Residence in my own Residence. The responsibility of this will weigh heavily, but not, I hope, too heavily on my shoulders, scissors, glue and paint brushes. the dottings will continue. I will of course, manage to balance this Residency with my many other artistic activities including IUOMA, making frequent visits to the Café de Paris, and local, national and international exhibitions."

He continued, "My friends, colleagues and fellow mail artists in IUOMA have spent the last week trying to guess where my Residency would be.  The first person who guessed correctly that it would be in my own residence was RICHARD CANARD who wrote, 'You are moving your studio work place from the back room to the entire house because membership and the demands of IUOMA have already taken over the whole house anyway.' Richard, Congratulations! and you win the promised Wonderful Prize, and it will be posted to you when I can next afford a stamp. Two others came close and win Honourable Prizes-- MIM GOLUB SCALIN for her suggestion  'La Maison Vieille Fontaine', and HELEEN DE VAAN for 'At home in Sigean.' Finally a Very Special Prize goes to DAN LANDRUM, for his incredible Pyongyang visuals and efforts to link Sigean with North Korea.

Thank you one and all for following this Discussion."

FinnBadger -- I am already Resident there (but as a drinker, not an artist). There is a village in Brittaney ( in the NW of France where we have a 2nd house) that's called Ploghof.  If there's a supermarket there, you could probably get a BOGHOF in Ploghoff.

Parissa -- I love rainbows, and had a complicated 9 canvas rainbow assemblage in an exhibition eralier this year

And bogof made me smile, haven't heard any one day bog off! In a long while.