October 31, 2010 - I saved what I think is the best piece of Snooky's Halloween mail-art for the day and evening of the occasion. Really nice holiday mail-art with the added bonus of Karen Champlinesque vispo included.
Great news that Snooky let us have a peak at his costume;… 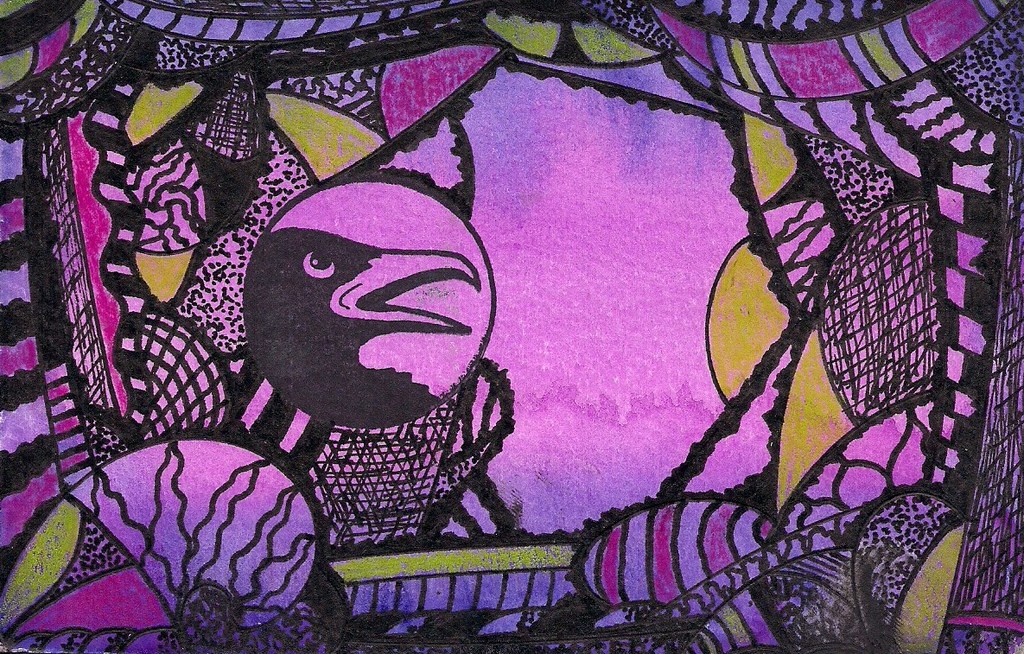 October 27, 2010 - Most IUOMA members who check the photo galleries and blogs have seen Austin Wills James' distinctive mail-art. Last week, I received this regular post-card size piece that I appreciate greatly. Much of his work that I've seen achieves various expressive and tonal qualities using an overriding base in - I think - watercolor. The address side provides more context for… Continue 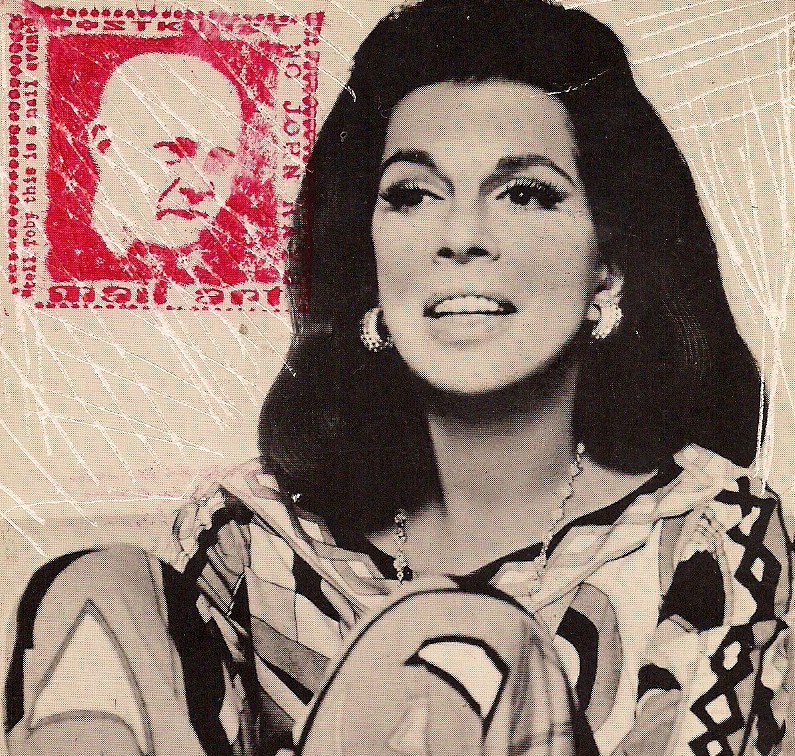 The Grigster always gets the girl.

October 26, 2010 - Just when I'd given up - a spectacular and much-hoped-for piece of mail-art arrived, sent by none other than Grigori Antonin. I've been impressed by the "new line" of work he's… 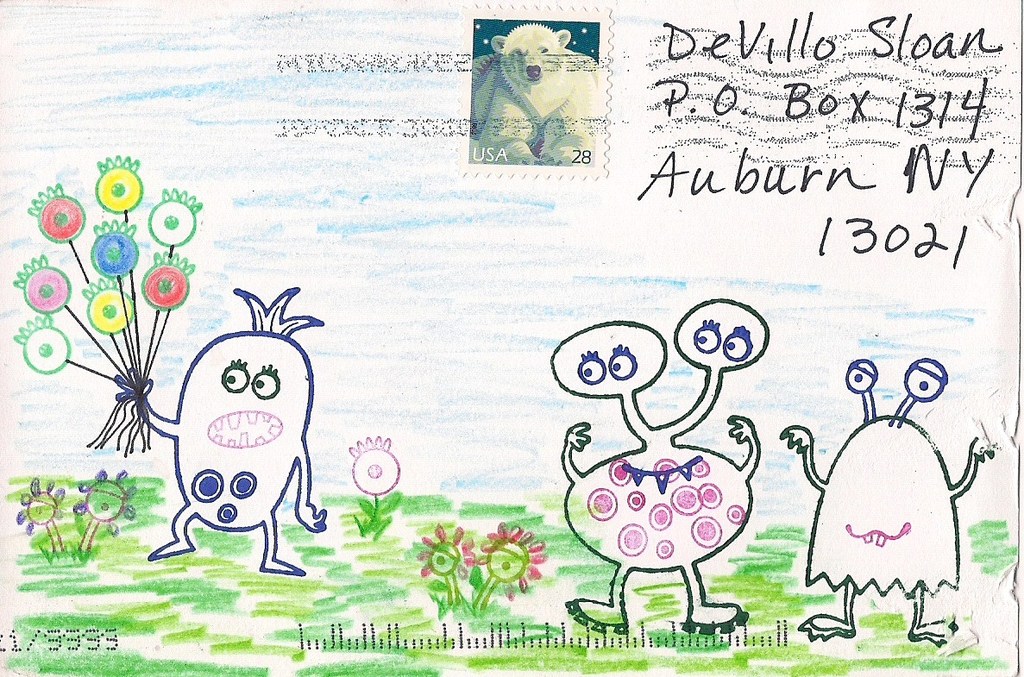 October 24, 2010 - How many countries in the mail-art network celebrate Halloween? All Snooky knows is they do in Wisconsin, and it's sometimes not as much fun for dogs as it is for humans. Yet Angie Cope's amazing mail-art dog - who has graduated from scanning to become a practicing artist in his own right - is in the spirit and sending out some wonderful mail-art (above). Pictured… Continue

October 24, 2010 - Bifidus Jones' chapter for Cheryl Penn's ambitious "The Crimsoned Giant" project needs no introduction for many here at the IUOMA. I'm blogging it myself hoping a few more people might see it and also so I'll have it in my own archives. I'm very glad to have this because it is one of the finer examples of mail-art by Bifidus I've seen thus far. IMHO. These pages have… Continue

October 22 - Ruud Janssen has released a new mail-art series featuring Fluxus words on hand-painted envelopes. You can see other examples here at the IUOMA and elsewhere on mail-art blogs. These captured my interest as soon as they appeared because the creation of Fluxus words seemed to be such an intriguing process. Only I had no idea how they were created, what they meant, or how… Continue 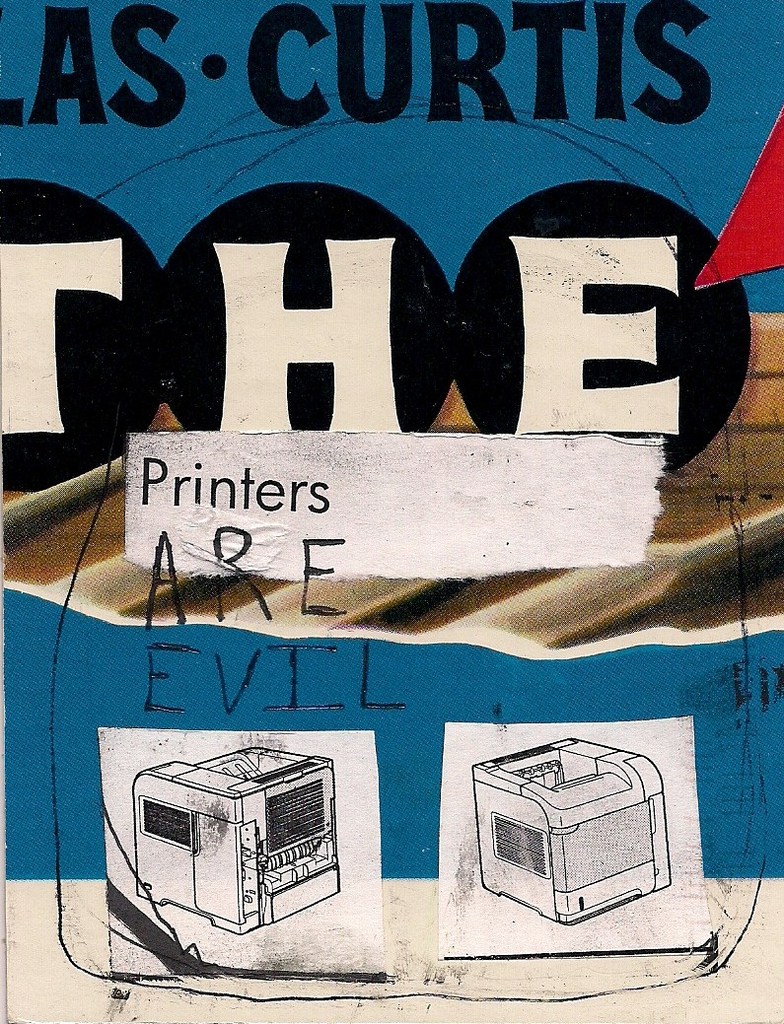 October 21, 2010 - Jon Foster sent me a second round of mail-art, and there certainly has been some evolution. The earlier work I remember was much more minimalist and image-dependent. He appears in this piece to be moving toward mail-art that integrates image and text - a slippery slide toward vispo? The printer images indicate a movement toward more complex collage and material… Continue

http://www.tomclarkblog.blogspot.com
October 20, 2010 - A number of IUOMA members have contributed to the mail-art show organized by John Held, Jr. in conjunction with the Black Mountain Museum and Arts Center conference (North Carolina) held October 8-10. I'm sure we'll hear news about the event - this must have been a huge undertaking. The occurrence of the conference and the Black Mountain…
Continue October 18, 2010 - Marie has done a striking minimalist mail-art series using strips of paper (or even some other dense material) glued over a post-card size surface. This piece I received is about as stripped-down and economical as you can be without resorting to representations of emptiness. When I look at Marie's mail-art above, I notice that the varying thicknesses of the black… Continue

Received: It's my Party and I'll cry if I want to mail-art from Cheryl Penn (Durban, Kwazulu Natal, South Africa) 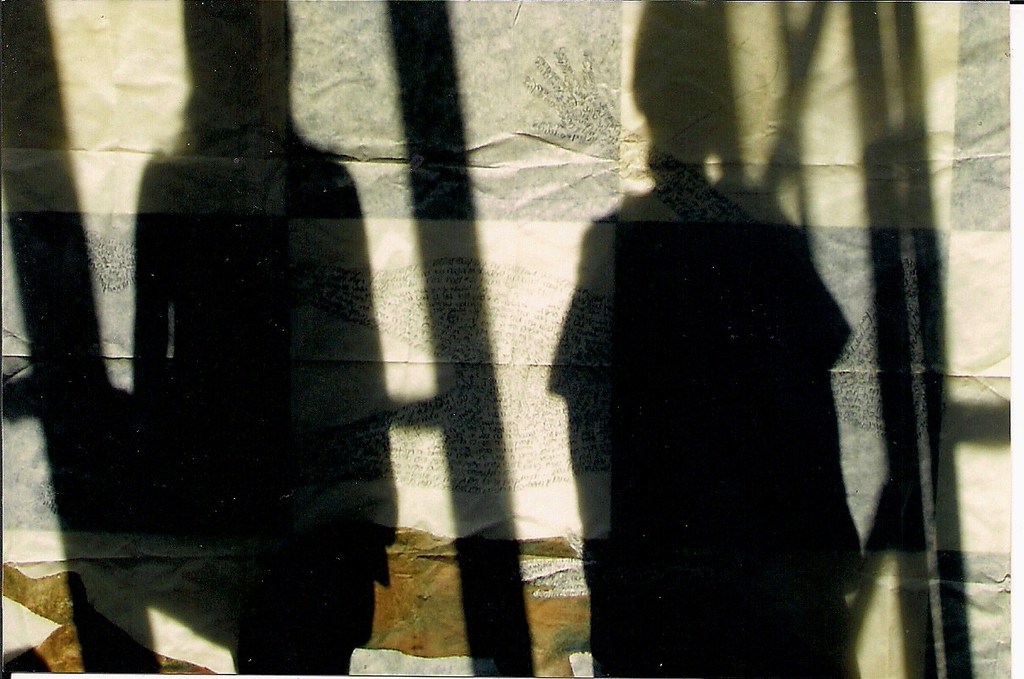 October 18, 2010 - Cheryl Penn sent me these photos of artwork she did that was posted on her website. I just find the whole concept of the shadows and the figure somehow haunting. Much as you find a great deal of layering in her visual-verbal work, there is a great deal complex signification in Cheryl's art that lends itself to many possible interpretations. If I got into it here, I… Continue 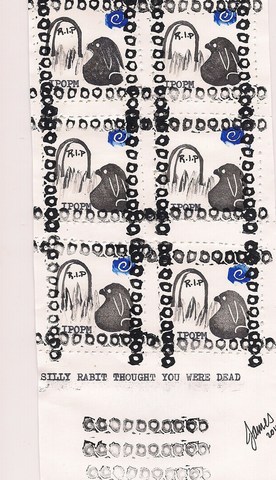 October 16, 2010 - Miss James did not make my day. She made my week, my month. I picked up my mail at the PO very early Saturday morning. Immediately I saw the NYNY stamp on the front and the Brooklyn address on the back and her beautiful artwork. Miss James sent me a special set of her bunny stamps, which I have seen at the IUOMA. This set is perfect for Halloween, although there is… Continue

Received: Mail-art of the Nihil from Eduardo Cardoso (Portugal) September 14, 2010 - Eduardo Cardoso sent me mail-art that has been long-awaited. And this piece was worth the wait because it is for me such an original statement that becomes part of the dialog of mail-art visual poetry at the IUOMA. First, Eduardo has called this piece "Tears." There is an artist's reason for this, but it is not about IUOMA. Tania - and I am sure Eduardo - add our… Continue 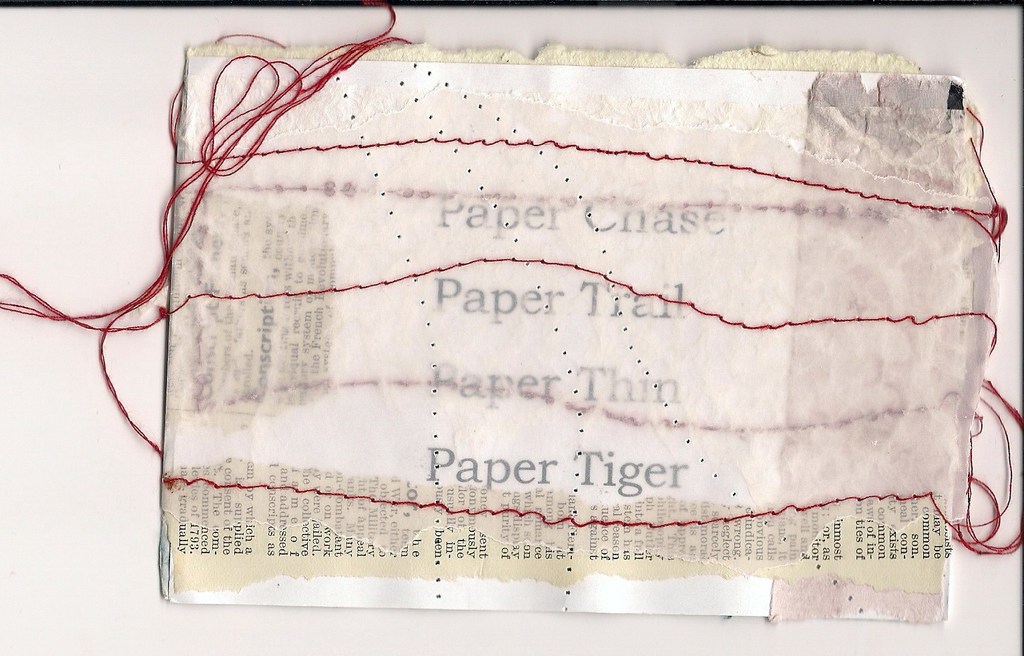 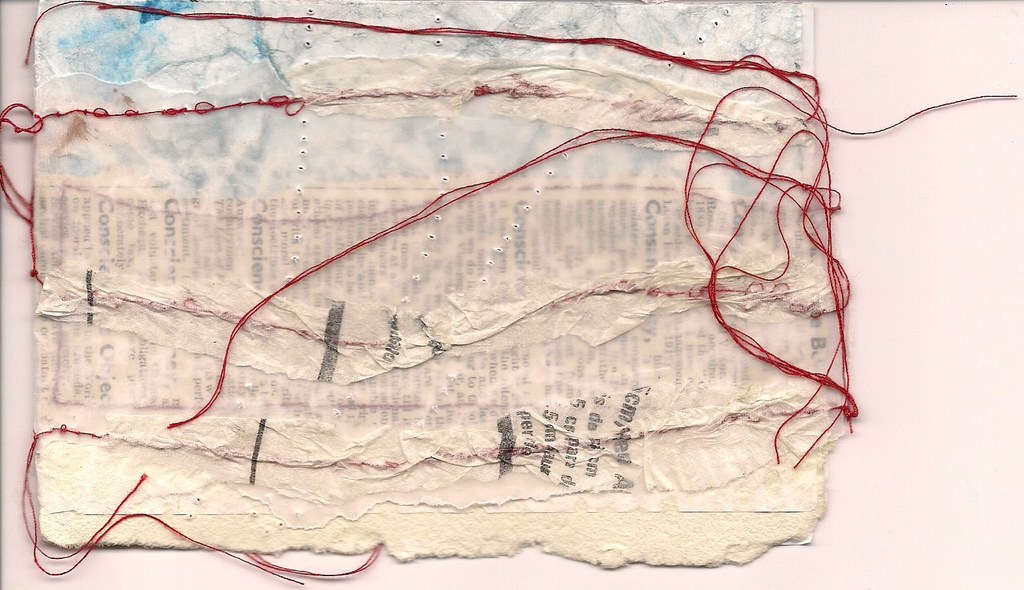 This is the front of the envelope. The woman at the P.O. desk said…
Continue (from 'deep square wave structure" by Karl Kempton)
October 11, 2010 - So, okay, I'm not actually mailing this. I didn't want to change the blog format for a one-time thing. Cheryl, it's amazing how Mehrl Bennett could put things in… Continue October 11, 2010 - Hugo Porcaro (Rev. Hugo) sent me this absolutely uplifting piece of mail-art that I can completely appreciate and that - as seems to happen in this mysterious flow of things - couldn't have come at a better time. Rev. Hugo washes it all away with joyous mail-art that reminds me what I'm here for and I am born again. His IOUMA profile says St.… October 9, 2010 - Discovering Mehrl Bennett's art and visual poetry has been yet another benefit of being a part of the IUOMA. Mehrl (aka Visual Mom) is part of a community of artists and poets that, for me, is a center of vispo in the U.S. This group includes IUOMA members Ficus Strangulensis, Sheila Murphy, Jim Leftwich, Matthew Stolte, and of course John Bennett. There are many… Continue October 7, 2010 - Karen Champlin sent me a new set of her mail-art assemblages, which I appreciate very much. It just seems to me her work gets better and better. In a previous blog, I discussed at length the relation of her work to vispo. Her use of textual material becomes increasingly more diverse and complex. This piece is the first example of something I've received from her that… Continue October 5, 2010 - Jon Foster from the southeastern part of the U.S. sent me this very economical or minimalist piece of mail-art that I appreciate very much. The majority of space is distressed blank cardboard. Although, as you can see faintly, there is some - what I take to be - indented store coding of the "found variety." The obscured eyes are… Continue 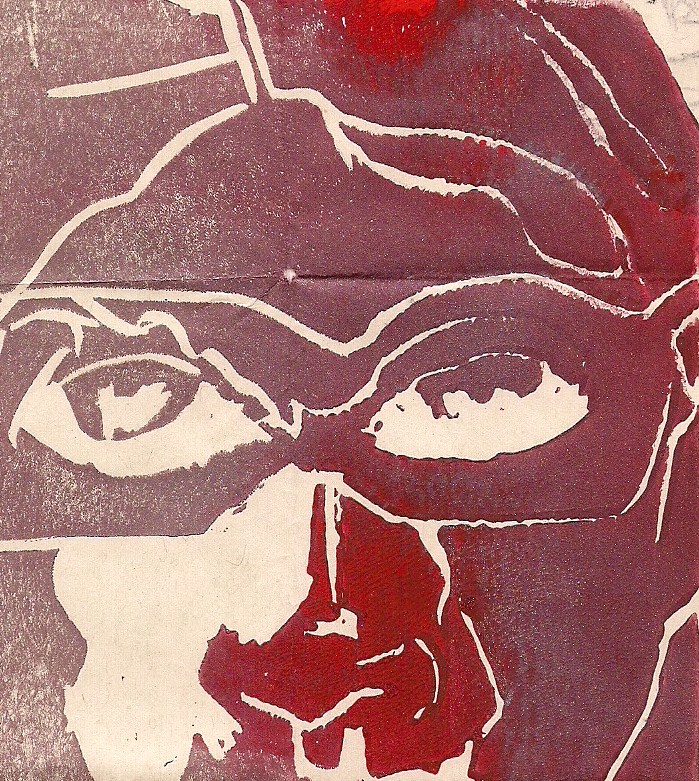 October 5, 2010 - This is the final installment from the series of mail-art prints Brent Leopold in Pennsylvania sent me. In the beginning I focused on the larger prints in the collection. Some of the smaller pieces (you can't judge size well from the scans) are very interesting. Brent produced somewhere around 1,300 prints last summer. A real project would be to look through the… Continue