The World is a Town - from Sue Bowen and Vaida Sirusaite

The World is a Town Project has had some really great contributions - I REALLY appreciate everyones participation - IUOMA friends make the world a small town :-). I have had various queries about this project so just to repeat: In 2009 I made a bridge book titled The World is a Town based on the Novgorod Codex - "the only whole medieval  object of its type from the entire Slavonic world (Dr Zalizniak). 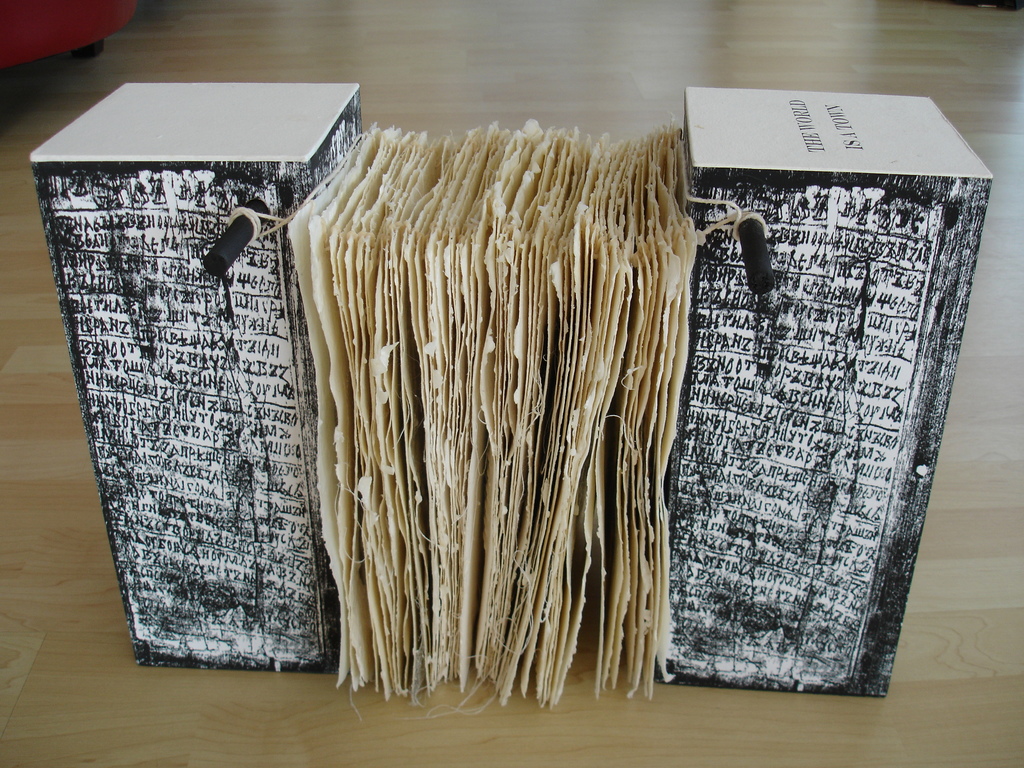 The codex consists of three wooden tablets containing four pages filled with wax on which its owner wrote numerous texts during two or three decades.  As it is a hyper-palimsest - meaning its multiple writings give it the effect of an over-used piece of carbon paper, much of the text is indecipherable. BUT some of the translated text reads The World is a Town.

I have commented before on the post modern views of othering, the global village and fragmentation etc as held by this man so long ago. I have cut up this book and sent it out as mail art. All the responses I receive will be collated and form Volume 2 of The World is a Town. This week I received TWO contributions - and I am HOPING for more :-)

For Sue Bowen - The world is a closed place alright - it requires opening-up and discovery to gain any enjoyment. But, when you take the time, its a world of possibilities ;-).The Open Me First Card told me that I could open up Sue's piece any way I wanted.  Let me tell you - anywhichway - this piece worked. Beautifully drawn, stencilled - kind of world map work.  Latitudes, Longitudes, a world of beauty and color for those who wish to view it that way. Complex of course, but what isn't? And from Vaida Sirusaite - another beautiful piece with her elegant stitched circle those of us who have been lucky enough to receive have come to know. The World Circle. 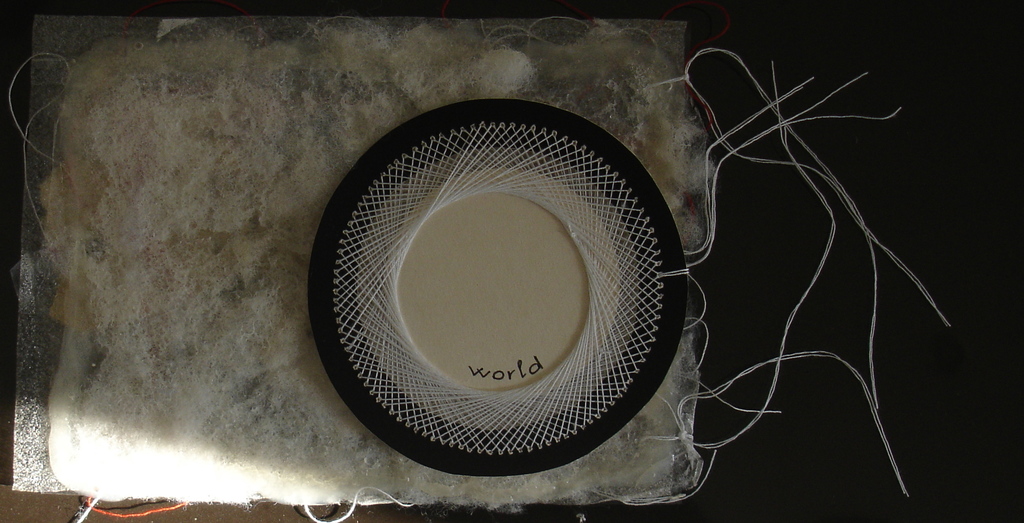 Its a composite work made of glue and thread - that which tries to bind us all together while we constantly pull apart. It DOES open like a book - SOMETIMES :-) - Sometimes its good to be closed too in The World Town.  Especially when one is faced with an Iago - a betrayer.  Just because he was passed up for promotion he destroyed the Moor? MAN! Time to withhold in the World Town then. And yesterday, two other pieces arrived from Vaida - a FAB book object: - La Distance - How I long. We look in constant search, dont we, to find the THING to complete us. And often its an isolated business. "They expect to allay their fears, fulfill their dreams" ...Best then to find an anchor, some glue and threads of friends to keep everything together.  After all YOUR world Town? Its what YOU make of it. Thank you both for your wonderful work - I feel really touched :-) X

Hey Rebecca - this is nearly a YEAR ago! Who would have believed... And I notice that tomorrow is Vaida's birthday.  Its been a LONG time since I heard from her - she went to work on Portugal. Time to make contact, so thank you for coming here and reminding me :-) XX

Thanks for the suggestion to look at the Novgorod Codex.  Interesting that my voyage brought me here! It makes me want to go to sleep so I can think about it. X Rebecca

Arggg, no, that doesn't work.

Comment by Katerina Nikoltsou (MomKat) on July 28, 2011 at 9:39am
These two works are AMAZING! Love the colors and "puzzle-edges" of Sue's "world"! And Vaida's flowing threads are also AMAZING! What a great project, Cheryl, and may you have great success with the installation...a World of Art!!! xx

Comment by cheryl penn on July 28, 2011 at 9:28am
I have decided this will be exhibited as an installation - NOT a book - the pieces are too good to be bound as a single entity. There is a wall - about 10m x 30 m in the gallery and all these works will go on with a world map showing where each piece comes from.