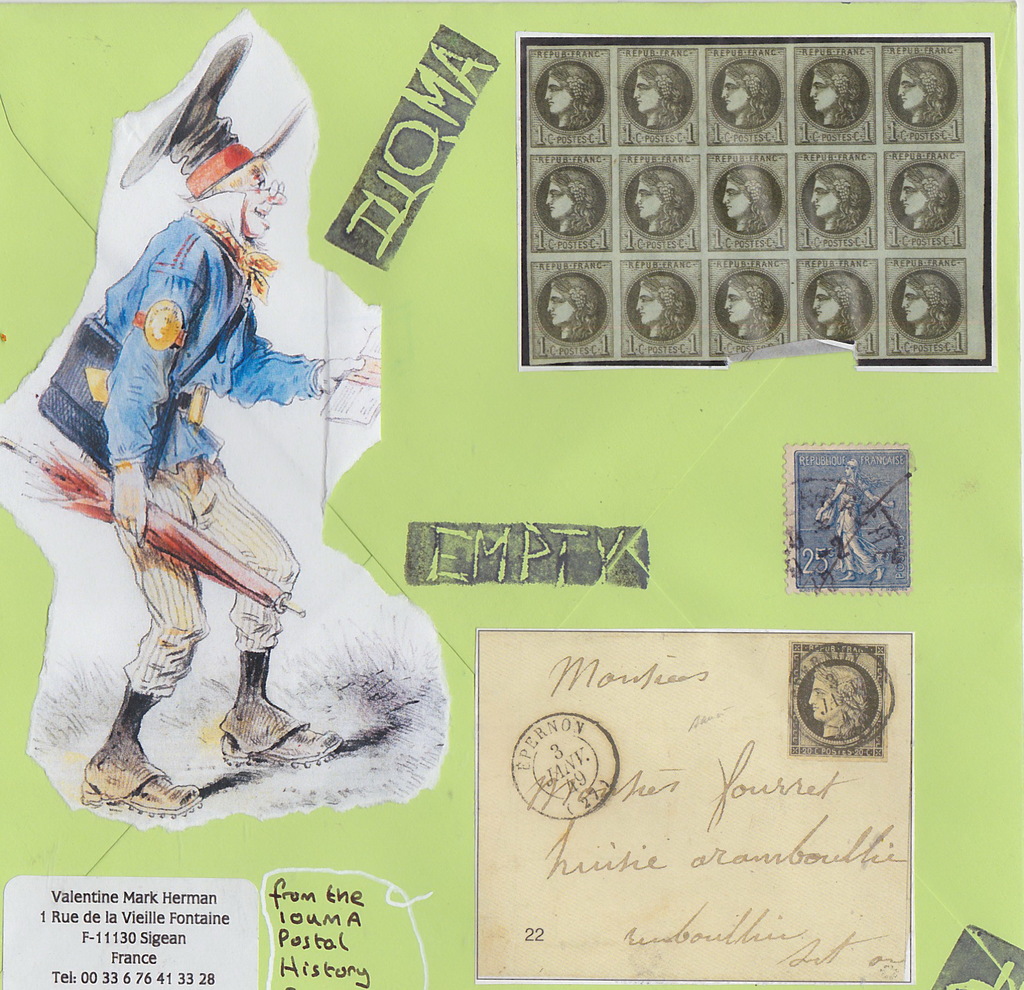 Good to give the Letter Box itself a look in- it makes everything possible !  Old Year -New Year -in + out....… Mim Scalin sent this tag, and now I can't remember if I sent her a tag or not. Let me know Mim! On the Last-day-of-the-old-year-good-mail-art-day! No.3: from Cheryl Penn1

Now, this is AMAZING (because it finally arrived). If I read the postal cancellation correctly, it is stamped December 9, 2010...read backwards, or right to left: 2010-12-09? Oh dear, South Africa and Greece have to wait once-a-month post, while Germany gets mail art before I can return from the post office! sigh...Such is life in our World/Town! Well, the wait is so well worth it! This is Cheryl at her best...wonderfully layers and elegant textures of "rice paper" and hand-made pulp…

On the Last-day-of-the-old-year-good-mail-art-day! No.1 from Herr Erni!

'Tis amazing how quickly we can communicate via "snail mail" between Germany and Greece. It shows how "very well organized" they are, and that they are "doing a very good job" at what they do (both postal services...plus the 5-10 daily flights direct to Thessaloniki helps, I am sure!) Well, on this the last day of the old year, it is so appropriate to receive this happy haptic package fro Herr Erni! Needs much study and reflections, and wondrous images appear and then too, many questions…

On the Last-day-of-the-old-year-good-mail-art-day! No.2 from Dortmund! An Amazing surprise!

Last year, at the end of 2009 going into 2010, Banana Man was very active here at IUOMA. And I do miss his photographic "portraits" and other "bananamania". So it was with happy surprise that this very "Haptic" card arrived on this very last day of 2010. Many elements have been recycled from other mail artists, and the entire piece is a rare collection and reminder of dear mail art friends. Thank you, Wolfgang!

(and see, the mail service is sooooo quick from (Dortmund) Germany, too!…

THE UNSPEAKABLE ViSIONS OF THE INDIVIDUAL. 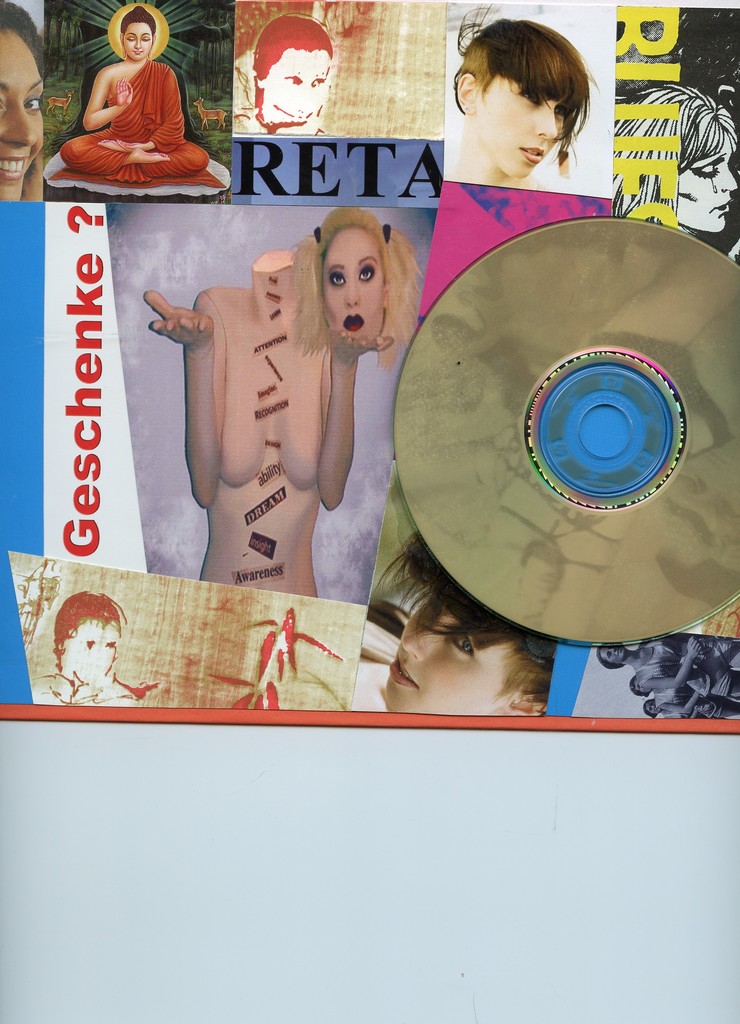 That's what was written on Erni Bar's package when it arrived,  My scanner cut off about 1 1/4' OF EACH OF THESE Fasinating pieces.  So concentrated with imagery!  Thank you… Continue

Argh. I've really fallen off the bandwagon when it comes to postal art. I let myself get caught up in little whirlpools of activity, and I never could quite escape. But now as I sit here, recovering from wisdom teeth surgery, I am making another New Years' Resolution - This time I am participating in the Mail Art 365, starting on January 1st.

This will help me focus on using the mail… Dear friends, wish you all a very happy, warm and creative year!!! And that we will mail happily ever after!
Hugs Kathy 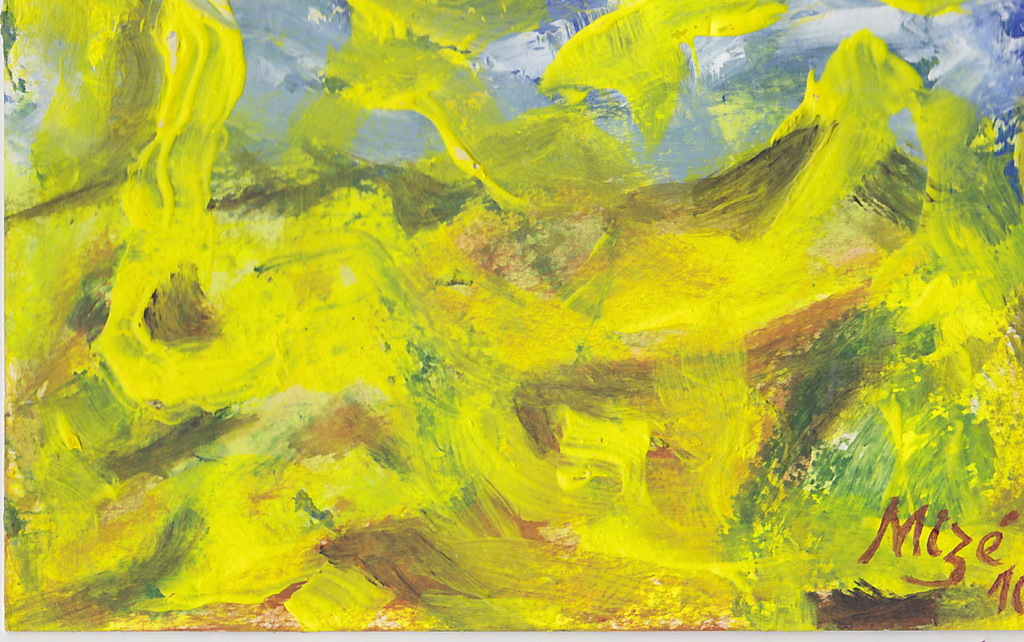 This just in from Joy-Slinger Laurence Roberts, UK There is a lot of movement in this piece, as if Laurence has captured this figure on the fly. The figure's expression  seems heroic and mischievous at the same time. Laurence painted over a photograph and the effects are energizing. 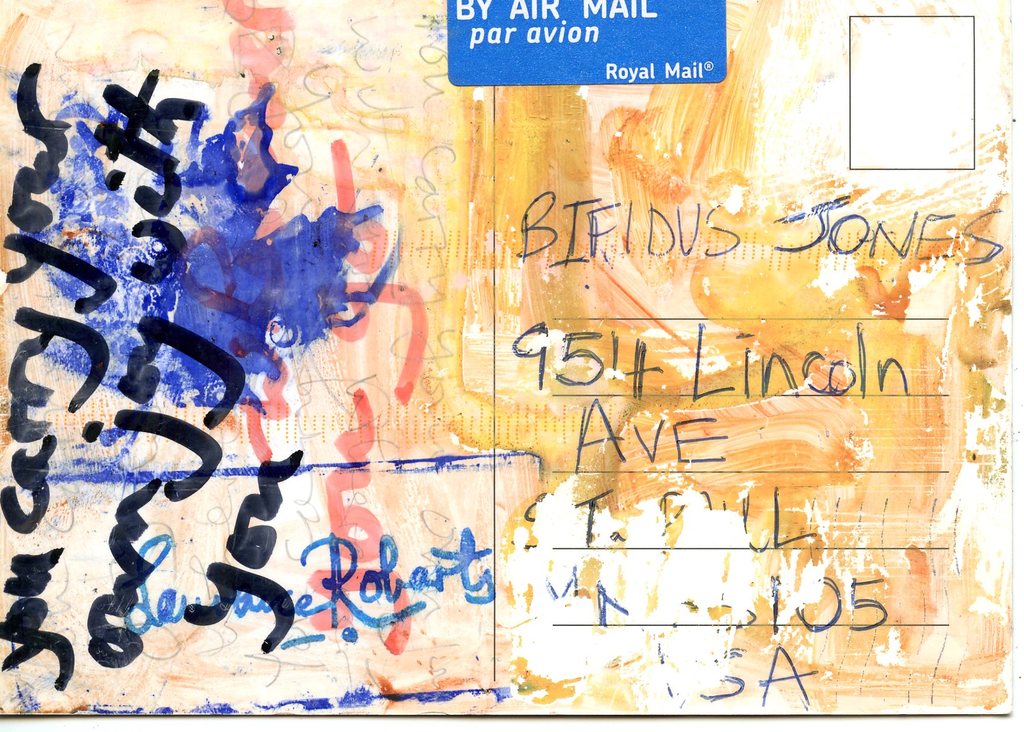 Take a look at… 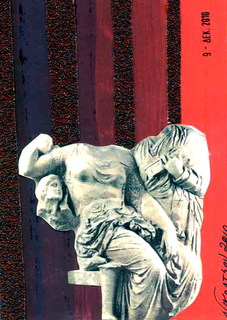 Here is a tag from Arttower featuring one of the heads from his Head Project. He also sent a post card with him in front of one of the Head Project paintings. 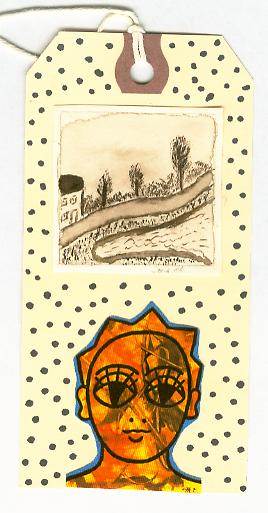 In April 2011, EtStudio celebrates the 4 year anniversary of starting
the Goddess Mail Art call of fabulouso Creative Exchange. We have had
submissions from 25 countries and one magnificent art show - and we will
have the FIFTH ANNIVERSARY show of Goddess art and artist trading cards
this SPRING!
WOOHOO
All art will be posted and shown on the blog -- see below, and artist trading cards will be exchanged.
1. Please send us your Goddess mail art, AND/OR six… Continue 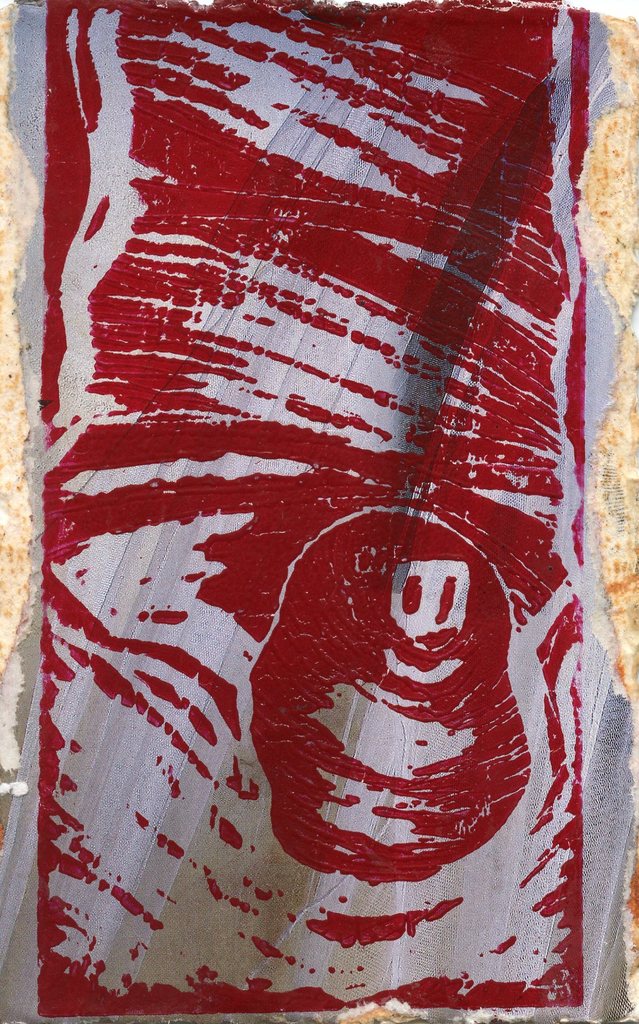 Greek blue and white from Wisconsin and Lake Michigan to the Aegean Sea here! Thank you Angie! When open, it has that wonderful "SEE THROUGH" element that brings us to a "KOSMOS"

of twirling worlds and delicate threads. 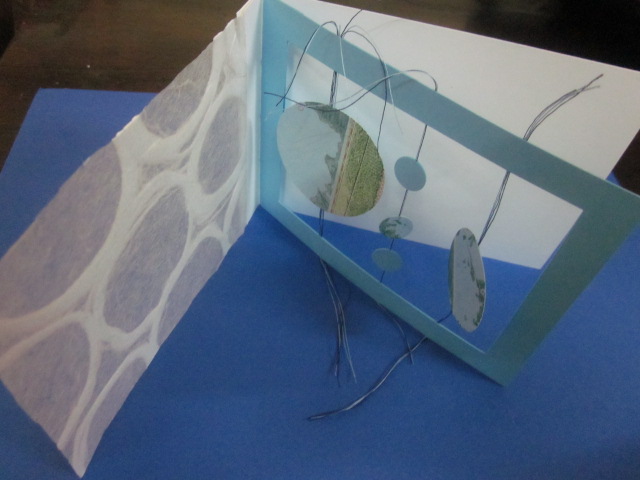 The textured "cover" is… 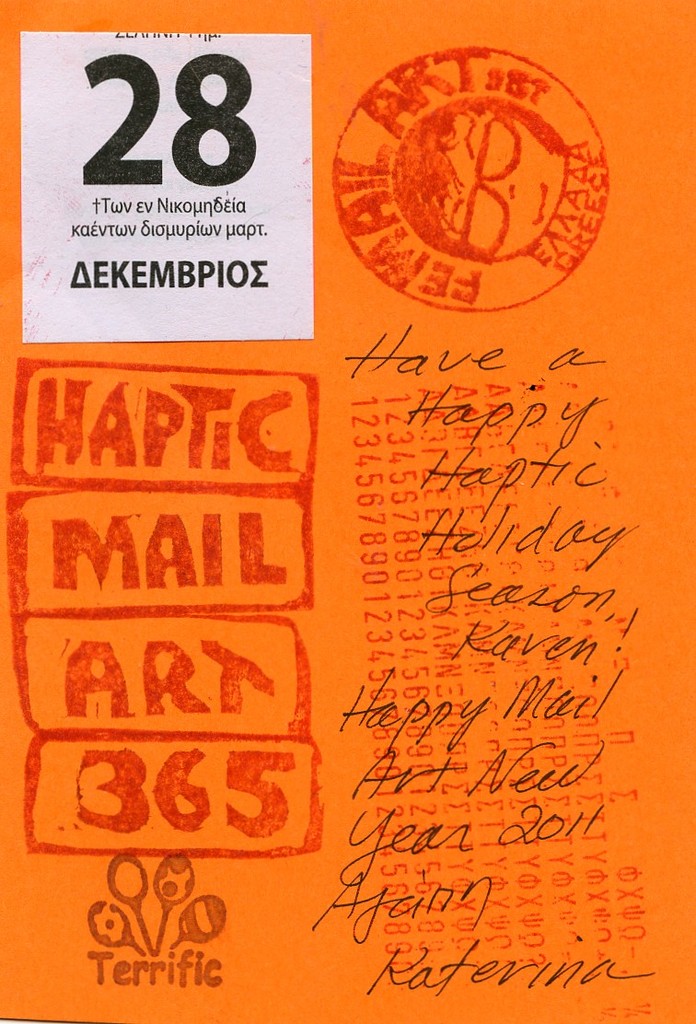 i AM THE lucky person to receive this stunning piece.  Katerina has been on fire!  Haptic Queen!  Imagine what will happen as she pursues working everyday.  A good sign for 2011 at IUOMA.  Thank you… Continue As of today, with the arival of No.12, I now have a collection of 4 "365"ers. Amazing is the fact that, without any set theme by the group, still these four cards are "butterflies" and flowers and blossoms, in cold WINTER! (Well, ok, I "added" the butterfly over Jennie Hinchcliff's "X", but butterflies abound!) Upper RIGHT is 2/365 from Rani, lower right is 3/365 from…