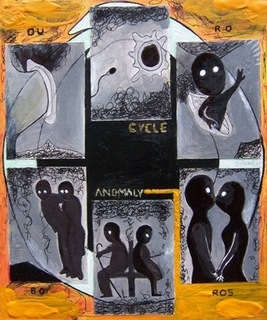 Send to  the Mail Art Call, titled " Little Big Stories - Big Stories on Small Paper ", the Exhibition will take place in Pimlico library in London, UK, for 2 weeks, and will start on March 2011. The organization has the idea to produce a book of all the stories which will go on the shelves of Pimlico library, but this isn't yet confirmed.

The SA connection and the Case of the MOMA art thief! A Jackson Pollock by cheryl Penn

And so, a small piece of one of my bloved Pollock paintings has found it way

to Greece, and now occupying an honored place along with a certain ninja yelling… February 20, 2011 - Could there be a mail-artist more mysterious than Atte Ourie? These colorful cards are appearing across the globe. (Finland is finding a place on the…

I am the very lucky owner of two Ithaca/Itaca booklets. You remember the first one by Katerina Nikoltsou, pamphlet of paper and sand. This one is from Alfonso Filieri and I was equally blown away when I opened the envelope. Alfonso's work with paper is just amazing. Crumples and scratches and subtle layers of wax give so much depth to an already beautiful thick… 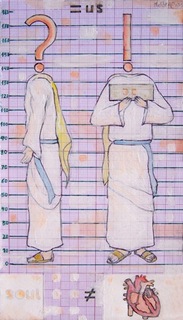 Send to  the Mail Art Call, titled " The Face of Jesus Christ", this project is part of Angles & Art-International MailArt Gallery Exhibition, that will take place in Haverhill,USA and will start in March 2011.

Hello to all the mailartists wich are sending and exchanging good energy and vibrations throught the mail service and the simple daily actions.

i enter last year in DODODADA network - the italian one- and i've really enjoyed in this corrispondance with the people i've "met" till now.  it's difficult for me to be "massive", but i'm going a little deep inside with the first conctacts i 've felt a good feedback. FREE AND FUN!

now i'd like to enjoy also with the international… 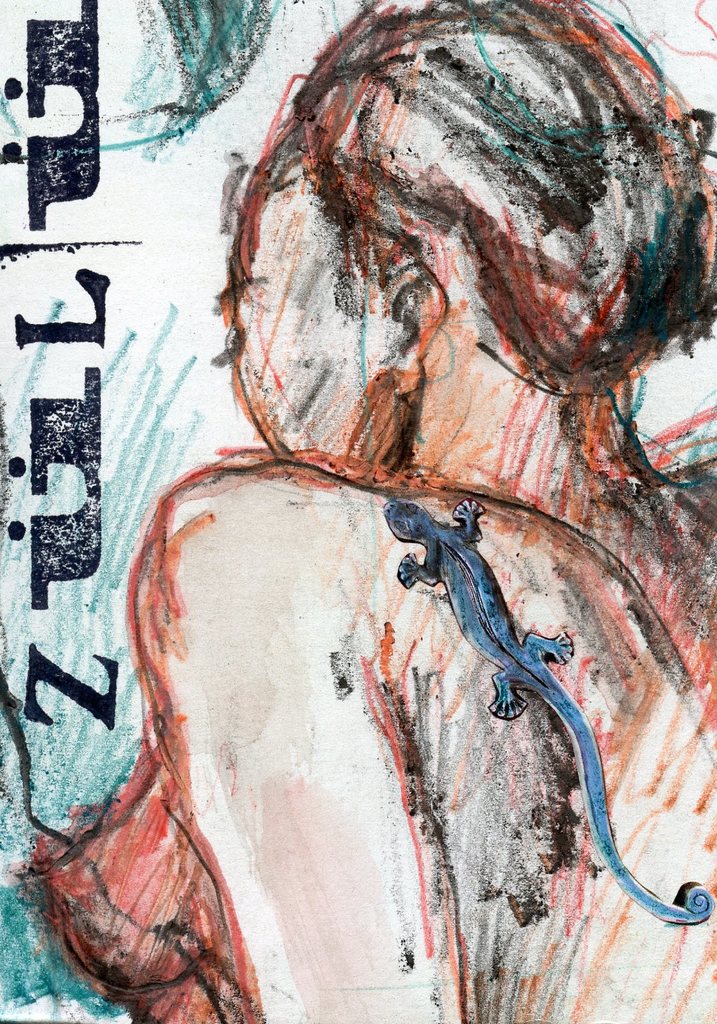 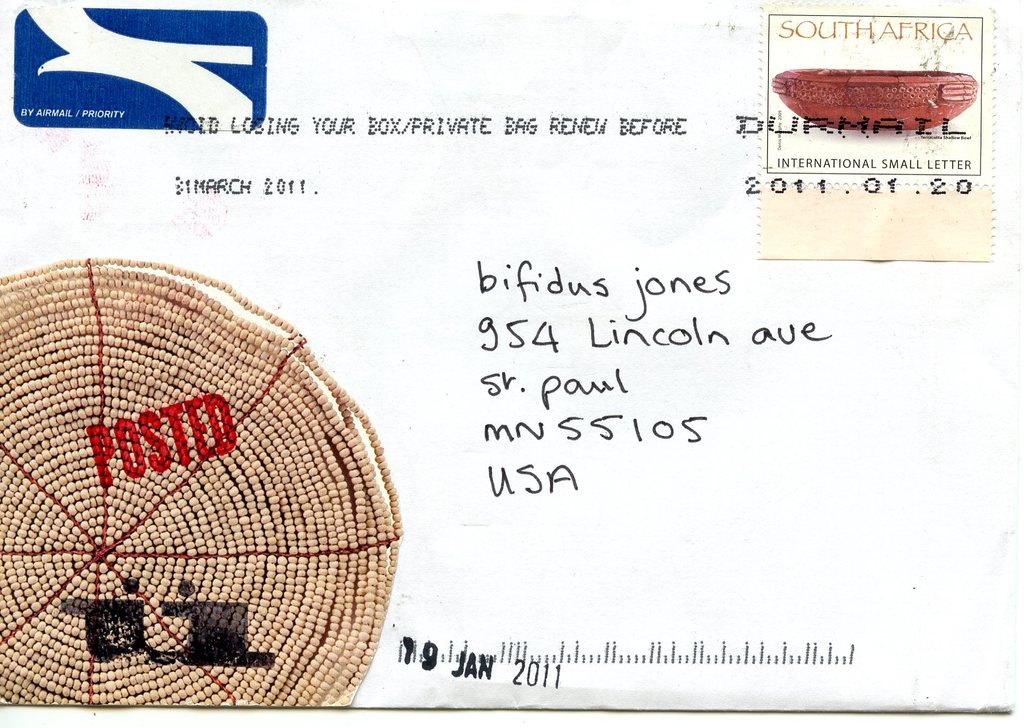 Leslie presents a strong sense of place by focusing on a Zulu woman, which I like very much. Her sketching, stamp and collage work communicate to me… Continue February 19, 2011 - I received this interesting call for mail-art from Sergio in Italy. It seems just about everyone in the… 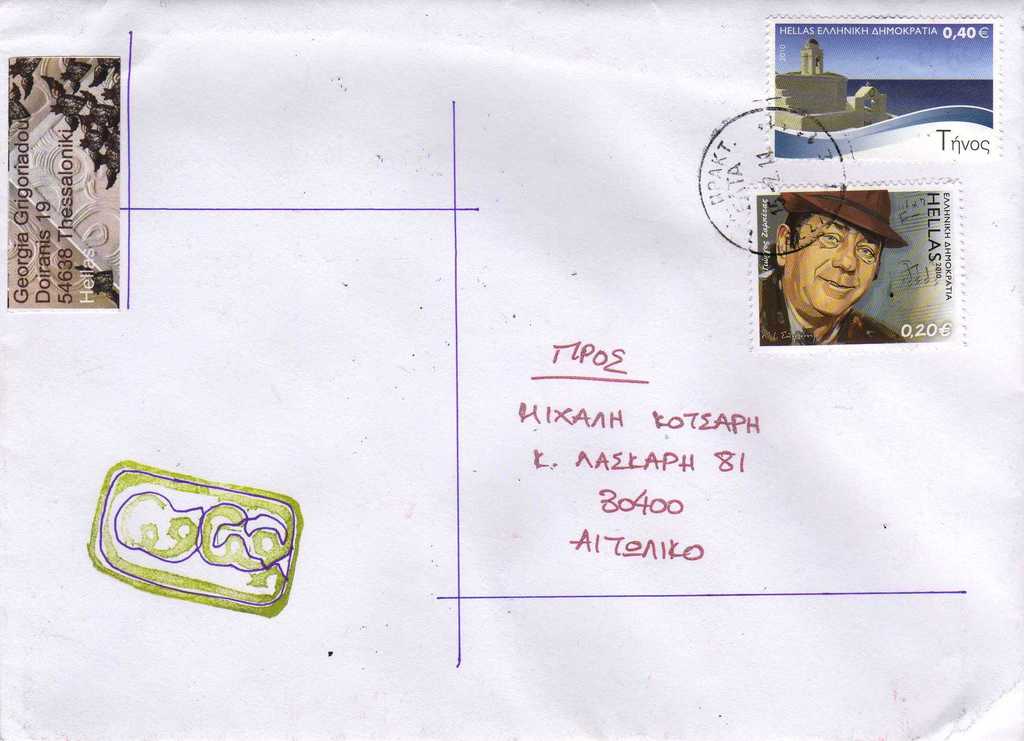 Thanks Katerina for whisking me away to the Greek Islands just before the foot of snow landed this weekend. This is quite a captivating piece! 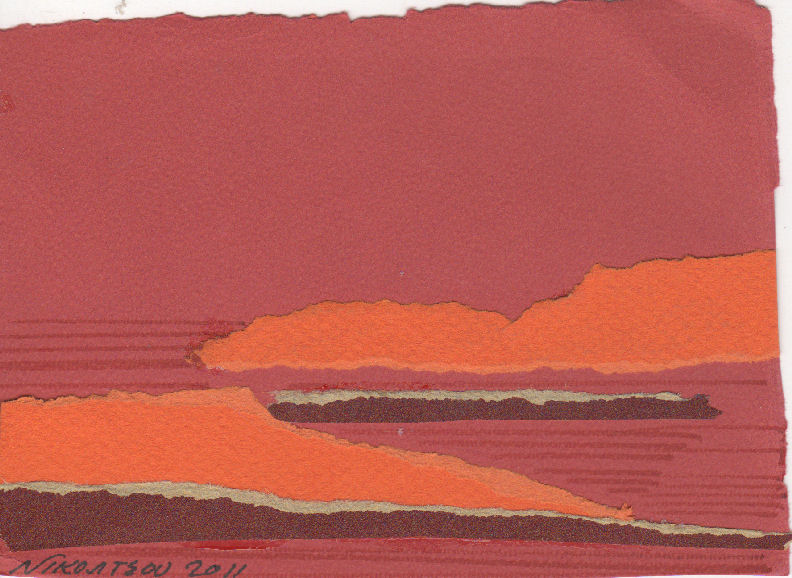 I love the colors, the design...well I love everything about this piece from Karen Champlin. This is such a COOL piece from Jon Foster. In his discussion on  letter A, De Villo Sloan wrote that  “Chapter A is about artifacts and archaeology. Many of the images come from out-of-print books about New York  State Native American artifacts. Most of them were made by the Iroquois or related cultural groups. So the real contributing artists here are prehistoric Native Americans".… 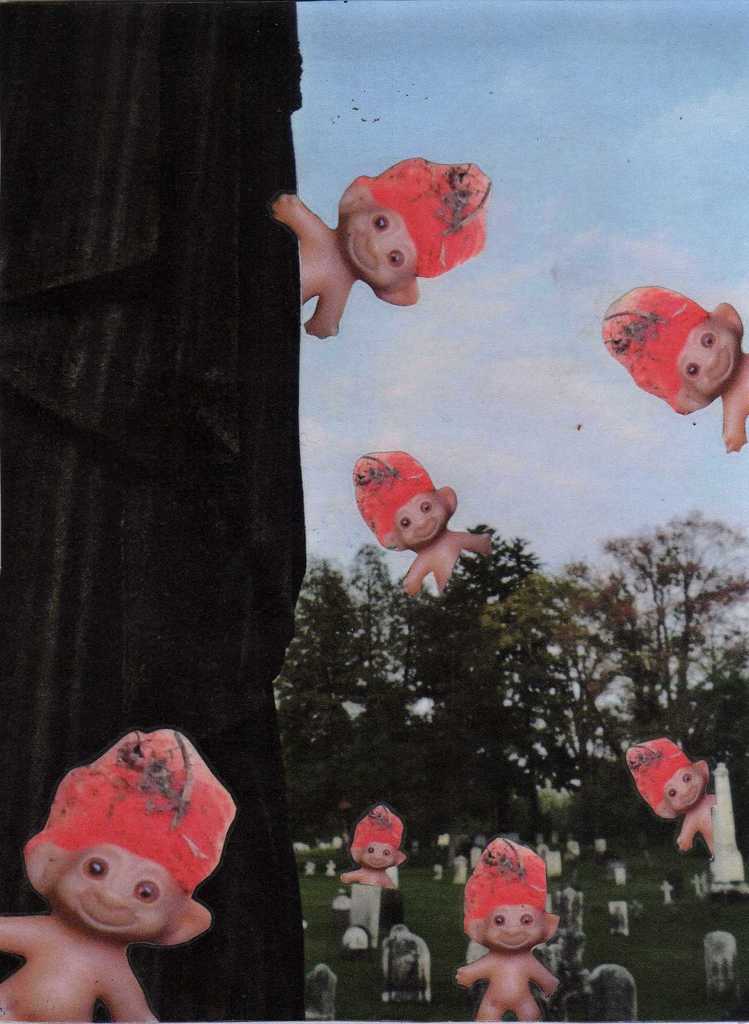 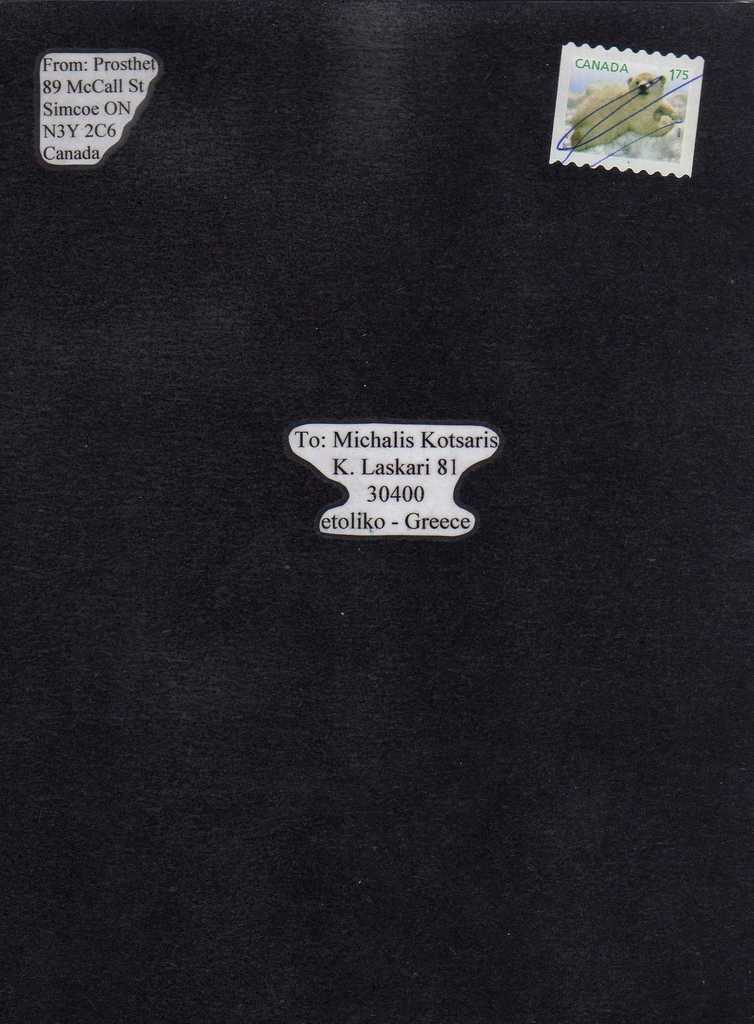 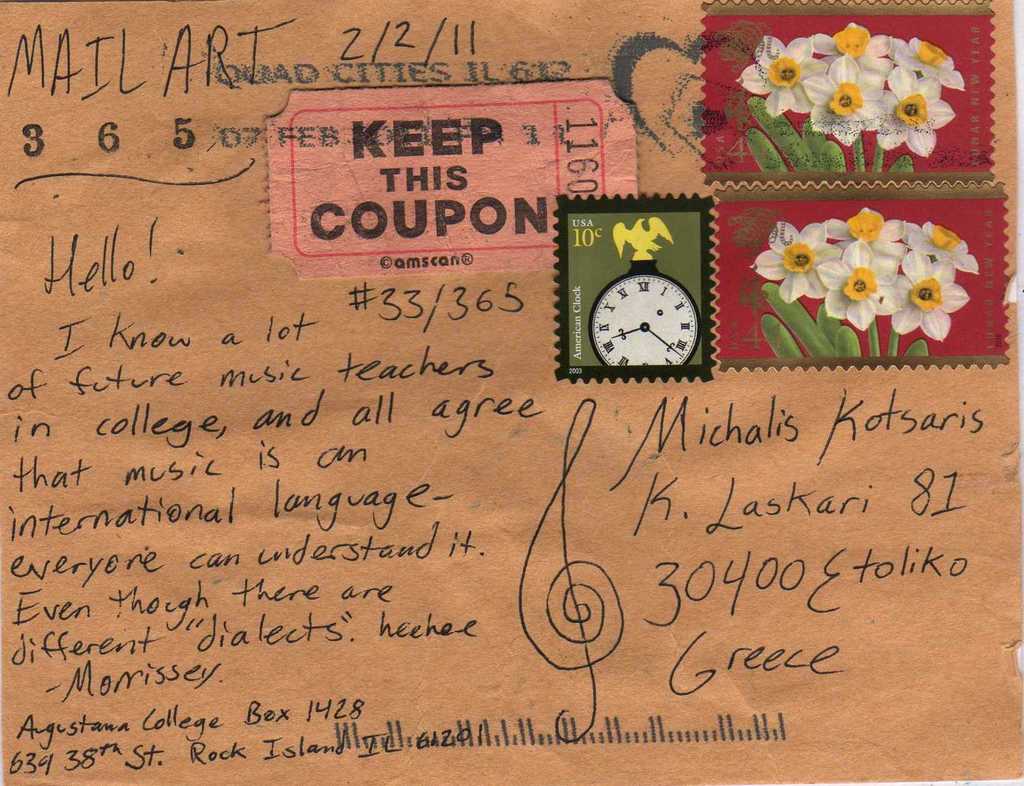 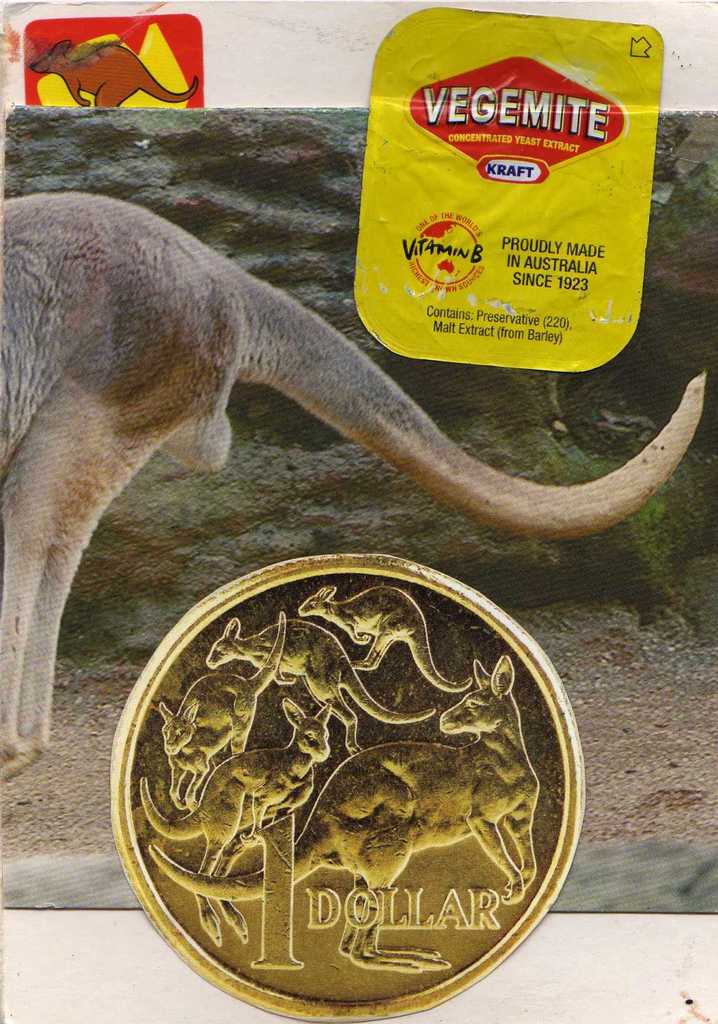 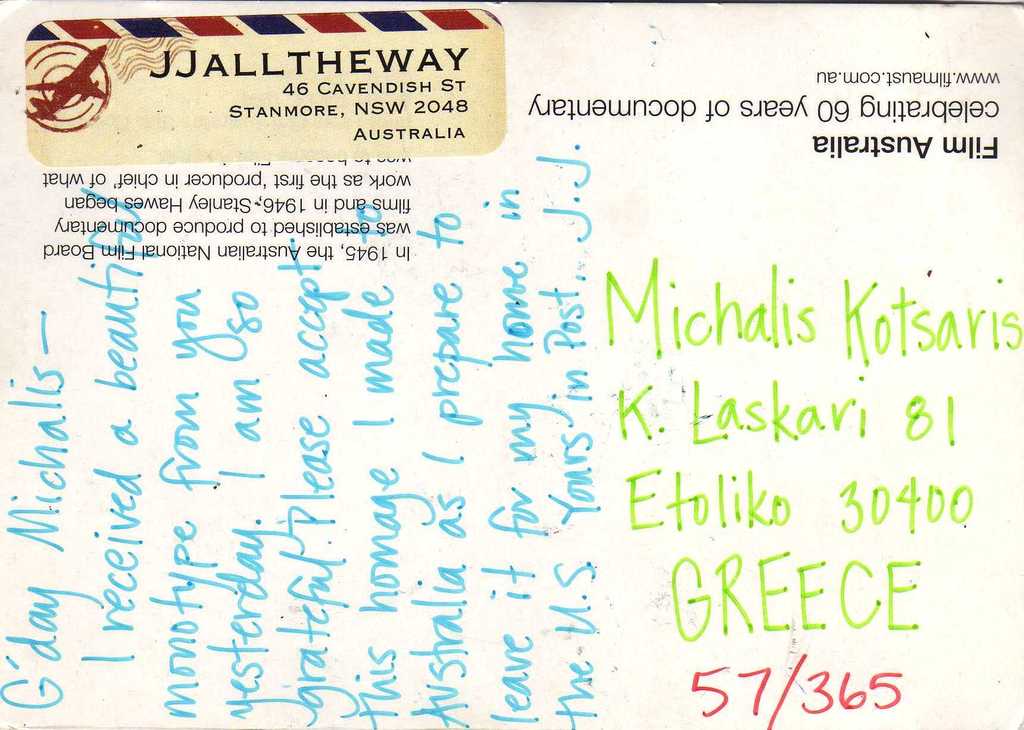 Receive from L.A. Walker-Usa. Lovely heart with art stamps- in my rainy mail box, that day! 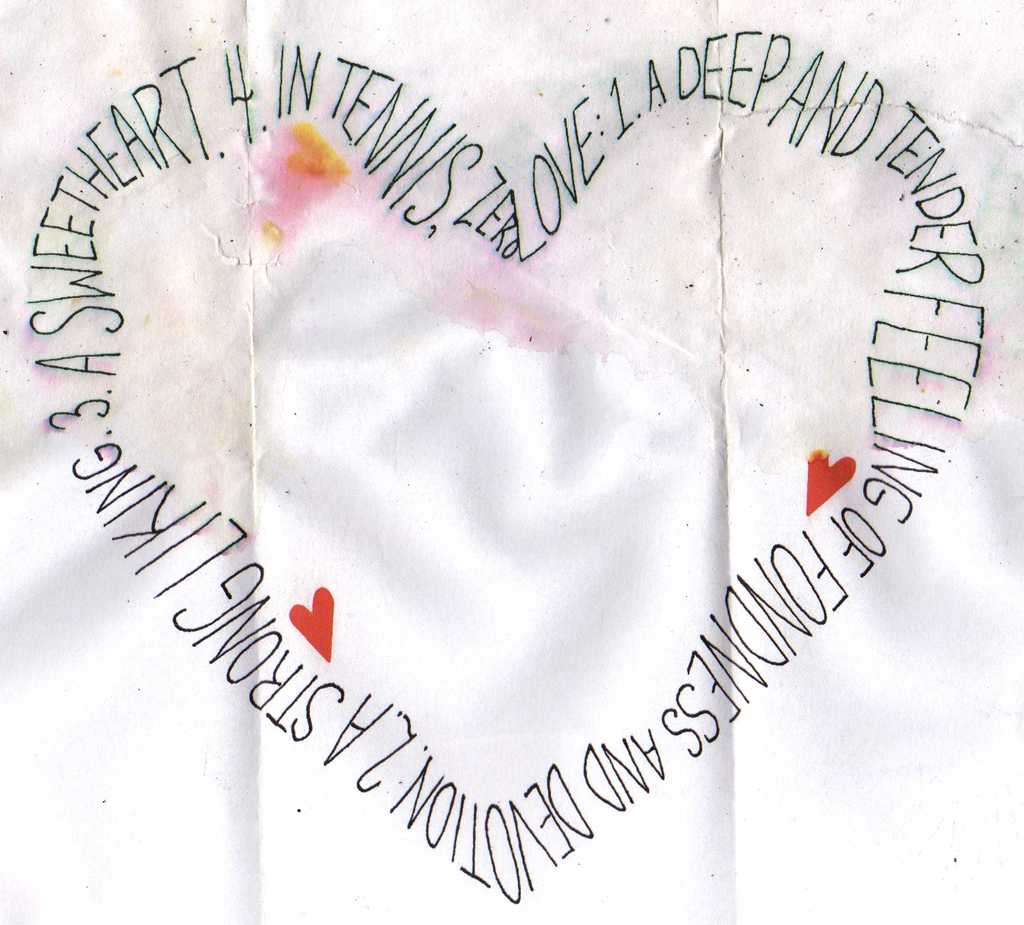 "the archaeology of a thought (through the relativity of time)"… These collaged post cards arrived with Susanna's Q section today. I told her, and now I'm telling everyone else,… Continue