Good friend Marie Wintzer sent me this extraordinary altered text piece (the frame above is the cover). The composition of Marie's piece dates back to those uncertain winter days when so many of us were concerned about her safety in Tokyo. That was also the era of Dark wall's "Stations of the Cross," an attempted mail-art epic. That sense of scale is reflected in this work by Marie. For all the blustering, however, "Stations" appears to be little more than a elaborate meditation on women's footwear. Marie's altered text achieves far more.

Marie always sends the nicest notes. The following also serves to explain how she composed this innovative piece and offers some insights: I have to assume Marie found the book that serves as the foundation for this piece when she was in Hiroshima, having fled Tokyo as the result of natural and human-made disasters. Dark wall used pieces of Japanese psychedelic posters in "The Desolation Angel in the Ruined Theater of Fluxus," an idea borrowed from me, so I believe we were talking about that type of poster at that time. However, Marie had used an anachronistic Japanese rock star picture in mail-art for Grigori Antonin several months earlier, so maybe it started there. Before I say more about why I think this piece is so amazing as a concept, here are more shots to give you a better sense of its contents: 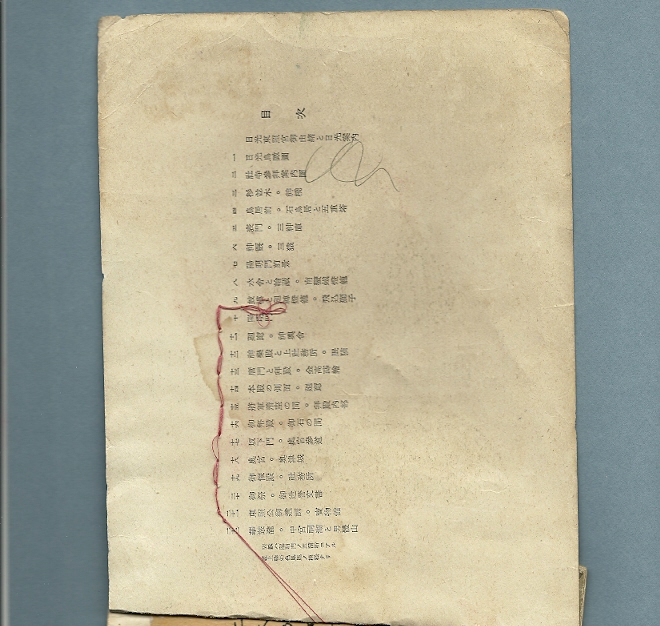 The natural aging of the Japanese text creates colors, textures, and a tonal quality. Marie is mistress of the oh-so-subtle. The paper is thin, delicate, fragile and seems in danger of tearing or even disintegrating without the most careful handling.

Marie is one of the mail-artists at the IUOMA who started the recent incarnation (really the only examples I know) of using thread and textile for asemic writing. The red threads are used to great advantage in this piece. Here's a scan of an image that was inside the text but free from the binding: 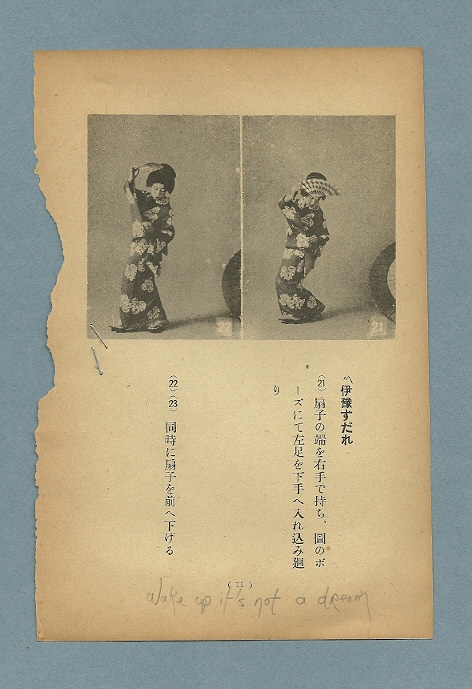 I even like the rips. This is just a wonderful assembling of still bound and loose fragments, held together by Marie's keen aesthetic eye and sensibility. The use of the thread combined with the altered structure of the text suggests an exploration of linearity and fragmentation, both elements somehow coexisting harmoniously in the piece.

In addition to her sense of aesthetics, I am coming to believe more and more Marie's success is the result of her ability as a conceptual artist. In less than a year's time, she has created an astonishing (to me) number of innovative concept pieces. What's interesting about this work is how many pages are missing. Marie's note says she tore them out because she didn't like them - that's enough to add the Fluxus performance interpretation.

In my own reading, I prefer to think of her action as creating absences or the better-known "silences" in the text: missing pieces of a narrative more tantalizing than the story we are given. We use our imaginations and powers of reason to fill in those blanks. (The desire to fill narrative silences is so strong that, for instance, whole novels have been written to fill in missing gaps left in other novels.) Marie did all that interesting art using holes, so I think this idea of emptiness, absence, whatever you wish to call it, is of interest to her. Here are the photos she mentions in the note above, paper-clipped into her piece: 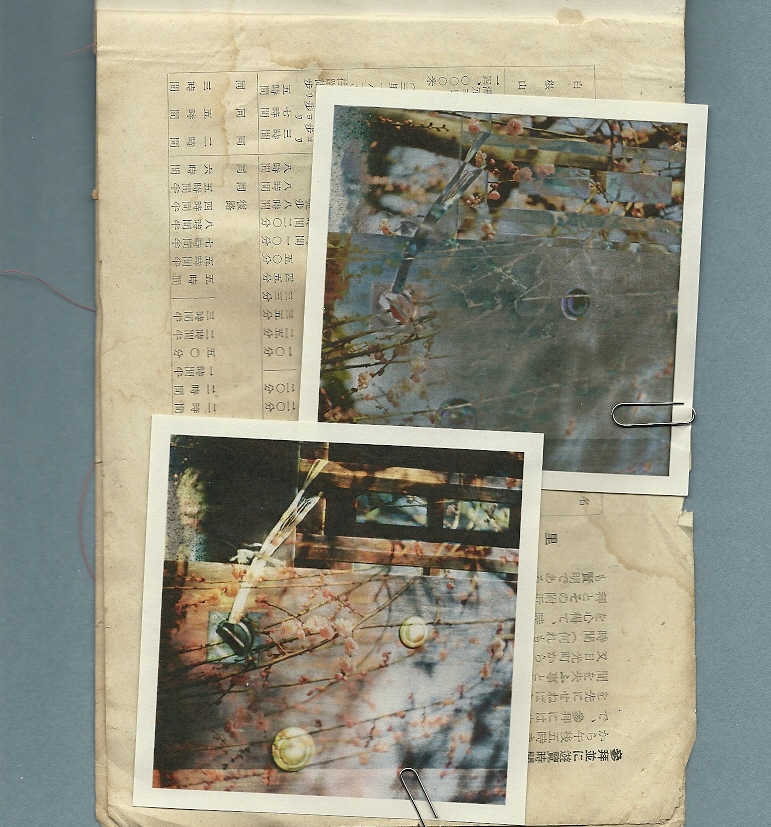 To me, Marie's altered text is incomplete on several levels and was (more or less) purposely left that way. Due in part to the problems she encountered with the photos, Marie chose to leave the piece unfinished in a conventional sense of silences and lack of narrative resolution. Additionally, it remains unfinished to reveal process (when much art seeks to conceal process) and even gives me the option if not the invitation to become involved. This ties in perfectly to the concept-based and interactive spirit of mail-art. It's an engaging and thought-provoking work. Here's another page: 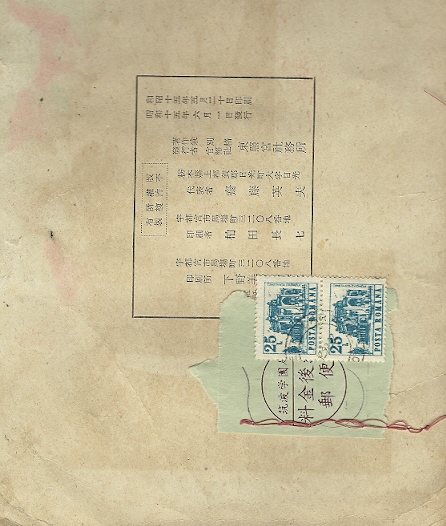 And, finally, the other half of the cover: 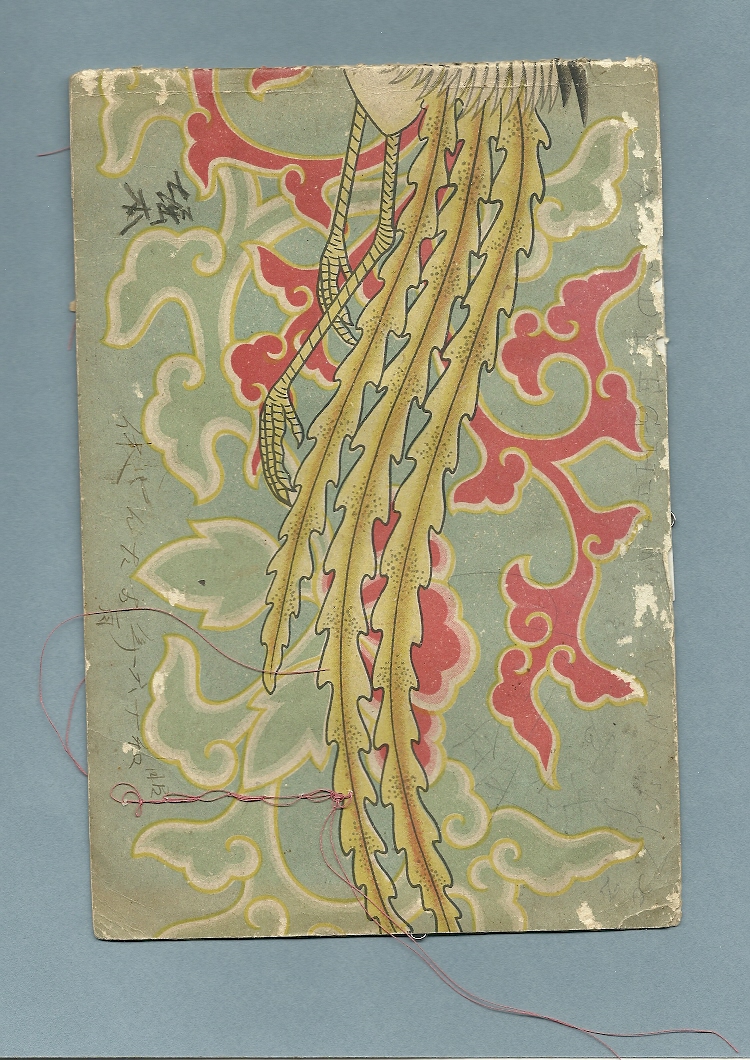 More peacock feet? I'm not sure. I am sure I greatly appreciate this mail-art and will always treasure it. Many thanks. What's been happening with Marie lately? You can be sure it's something. She has, in my opinion, the best little blog in the mail-art network and it's worth visiting as often as is possible:

Comment by De Villo Sloan on June 14, 2011 at 3:25pm
Stop stirring things up, Marie! All languages are welcome. The only exception is DW.

Comment by Jen Staggs on June 14, 2011 at 6:14am
Marie!!!  This is an outstanding piece- I can't say enough great things about it.  It is so serene and delicate like a quiet dance.  I absolutely adore it.  Thanks for sharing it with us, DVS!

Comment by De Villo Sloan on June 14, 2011 at 1:58am
DW  is banned from speaking French here too, BTW. I expect by now we're back to our regular 2.5 readers. I never know when my responses to the art are totally off-the-wall, so I'm glad to have some support. Your choice of this Japanese book really nailed it. You had solid material to build on. What you did with it after that is sort of, well, astounding. We're used to dealing with the unusual here, but this is a step even beyond that. You definitely did send it to the right person.

Comment by Marie Wintzer on June 14, 2011 at 1:39am
I'm happy it got such a great response too, I didn't quite expect this. I don't know why, but just now I have the title of this book in mind, Le Hasard et la Nécessité. It was bit of both.

Comment by De Villo Sloan on June 14, 2011 at 1:01am
I'm very pleased with the response to your work, Marie. Comparing it to "Stations" really does give it context. Both pieces are long, but they have that incompleteness element going on and they seem to elude closure. So this was a really amazing exchange. I'm sorry I didn't post it sooner because it also helps to know the events and tone of that STRANGE time.