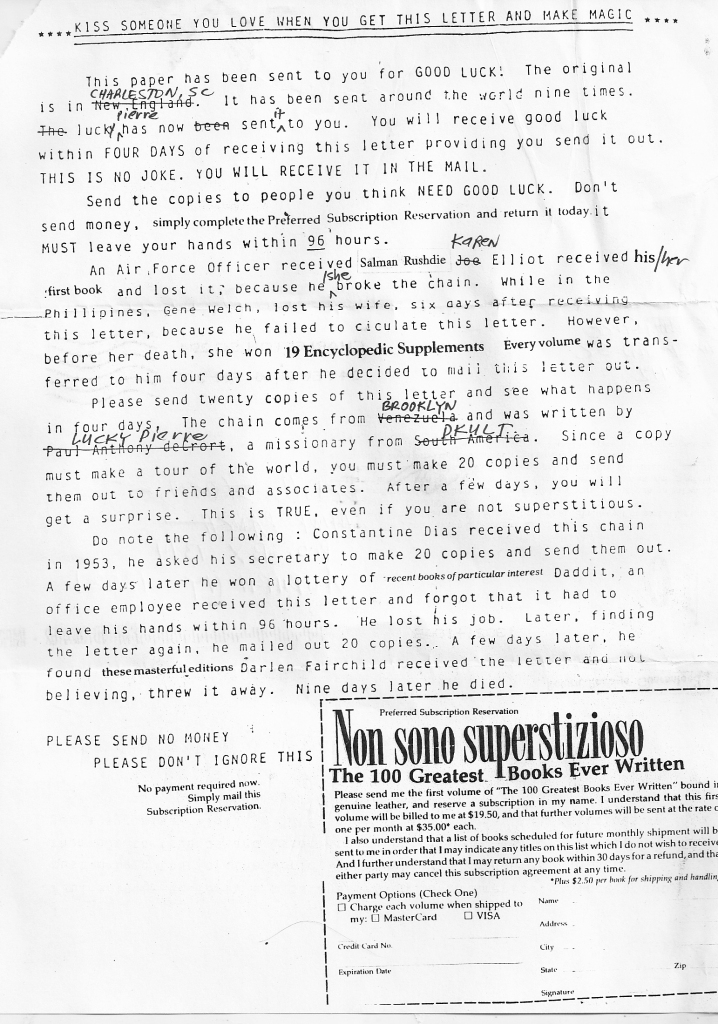 February 20, 2016 - Lucky Pierre scores for retro-conceptual brilliance with this recycled chain letter, altered to serve the greater glory of DKult. What an amazing idea!

I remember my parents routinely receiving chain letters and pyramid schemes through the mail, so they must have been common. They are curious artifacts and, of course, now have equivalents on the internet; but the digital messages can never reproduce the strange sometimes Masonic sometimes sideshow qualities of the strangely worded, printed and copied letters with their often magical invocations and/or pseudo-science.

Coincidentally, I have sometimes pondered if Ray Johnson and other early network architects had some sort of pyramid scheme structure in mind when they considered the idea of spreading an alternative culture through the postal system. The model, theoretically, could result in reaching millions of people. Depending on how you calculate the numbers, a case could be made that is exactly what happened in the 80s. I could see John Cage, for instance, making that type of calculation. The first mail art I received from New York City many, many years ago did often seem to be part of some multiple copy scheme. Anyway, that is simply idle speculation.

Many thanks to Lucky Pierre for yet another wonderful piece!

Richard, I hope you will always feel free to comment. You and Rebecca Guyver are tied for "Most Self-Effacing."

Lucky Pierre invoked her roots in the New York City area - yes, possibly Brooklyn - when she once threatened to physically beat me. She felt I had insulted her (in a Facebook post). No offense was meant & I would like to think she & I have resolved our differences, although I am very cautious now.

I am also very sensitive concerning Brooklyn due to the drubbing I took at the hands of Meeah Williams (another Brooklyn resident) who was supported by Diane Keys and then later even Mark Block who chimed in against me concerning NY DKult chapters. I was "relieved of my command," as I think they say.

Isn't there a Woody Allen quote? "Just because you are paranoid does not mean they are not out to get you." (?)

20.02.16 Dare De Villo S., Oh no, no, no. Richard  is merely attempting to play with words & making still yet, another thin bad joke.( I don't think you miss much of anything  that dares to present itself on the table). As I understand it, Lucky Pierre is a former New Yorker  & possibly lived in Brooklyn at one point. ... & or does this add anything or is it still dependent upon  & referencing  the other semi-logical "original" source of the letter ??? (Perhaps I should just slide back down & underneath the table where I came from  & where that bottle of Cabernet Sauvignon is).  Cheers, Richard C.

Well, yes, Richard. Lucky Pierre is in SC, and the letter is about luck. Am I missing something?

The part that gets me is in paragraph 3: "The chain comes from Brooklyn and was written by Lucky Pierre."

At first I thought it was another Meeah Williams forgery. I don't get the Brooklyn part. Maybe I don't get any of it. I suppose she was just needling me with the Brooklyn reference as it has been a sore point between us.