A Rendezvous in Paris

I am so far behind in my blogging that I may never catch up. Forgive me, everybody. But I am starting here with a piece that arrived from Dean just before we departed for Europe. It’s a wonderful riff on the Vizma Art Barns or whatever they are with one of Dean’s strange stories on the back that creates more loose ends than it ties up. Which, of course, is the way we like it. There are 19 of me scattered over that landscape whose meaning I am embarrassed to say I totally misunderstood until Dean set me straight in person, in Paris. Yes, friends, Dean and I had our much touted tete a tete over our weapons of choice, beer and wine. I have to say I had some treps about connecting in person with one of the phantoms I exchange mail art with. But I am always moaning about going to foreign places and only interacting with concierges and bartenders so I emailed Dean. When we met outside the appointed Metro stop Dean put me at ease immediately which, somehow, I knew that he would. He brought a large A out of his knapsack, perched it over my head for the photo op and then we soon got down to the business of gossiping about all the IUOMA people we know. I had no idea how vicious he could be but it was great fun. (This is a joke, people). You’ve probably all intuited what a good person Dean is from his mail art but how many of you know that he is the Minister of Finance of France? Or was. Thereby hangs a tale of intrigue murkier than Finnegan’s Wake.

We, (Dean, Patti and I) retired to a cafe table and for a moment it looked as though we might do some collaborative mail art but the day was blustery and we were probably too tired to do anything more than display our toys. Dean showed me the latest treasure from Marie Wintzer. In short order, Dean’s lovely wife, Vanessa joined us and after we finished our drinks we lit out for the Ministry of Finance where there was supposed to be an art opening. Probably the first and only time I will be asked to hand over my passport to gain entrance to an art event but you never know. The Ministry of Finance, the one that Dean was the head of, was a big concrete warren of bureaucrats hefting, even after 6:30 pm, their dismal portfolios to and fro on the inner promenade. (Sort of Last Year at Marienbad with briefcases.) The opening, alas, was over and so we surveyed the art from behind a couple of walls of glass and pronounced it unworthy. Shortly thereafter Patti and I bid them adieu and went to the Bastille neighborhood and ate at a restaurant they had recommended....very good. Our meeting was all too brief and we spent the rest of time in Paris wishing we had arranged another rendezvous but Dean, being the ex-head of the Ministry of Finance, is duty bound to attend these tedious state dinners so his dance card is pretty full. Thank you, Dean and Vanessa for being our ever so gracious (he paid for the drinks) (probably with money purloined from the MOF) hosts. I have the feeling the four of us would have had a good time carrousing around Paris. Next lifetime. Buying drinks?  I must remind you that we had a gentleman's agreement that I would pay for this drinks in exchange for your first born child or first painting, which ever came first.

My guess is that you have now moved your art studio into the bedroom in order to complete this contract.

PS Thanks for the card that arrived today. 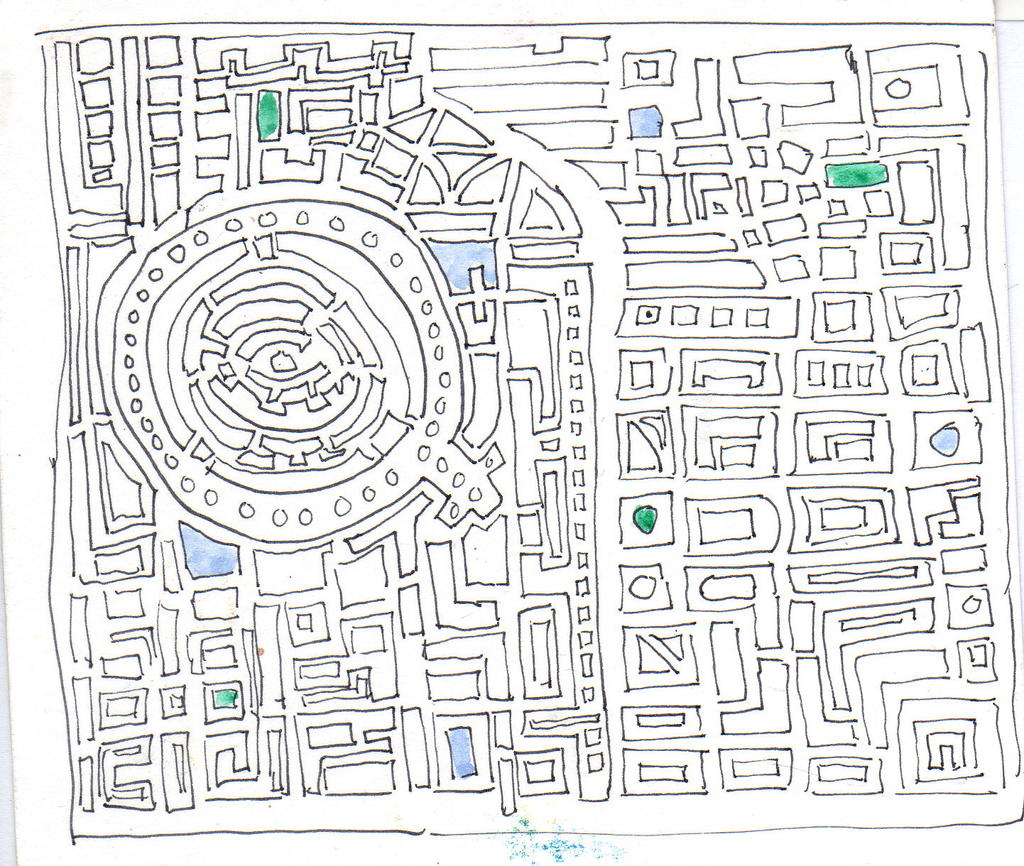 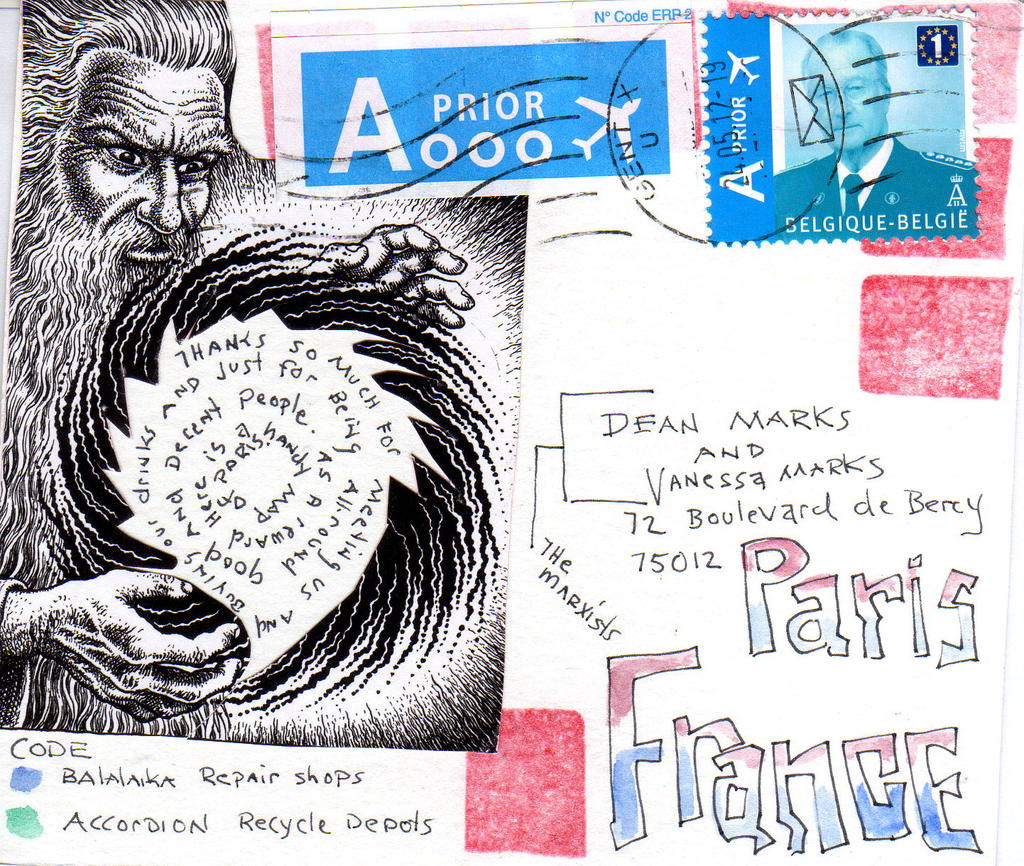 OK, so the historical reference isn't perfect. Yet it is "peace in our time." Great blog.

That's right DVS, I'm the one on the right with a new bow tie that I bought on sale in Penny's. 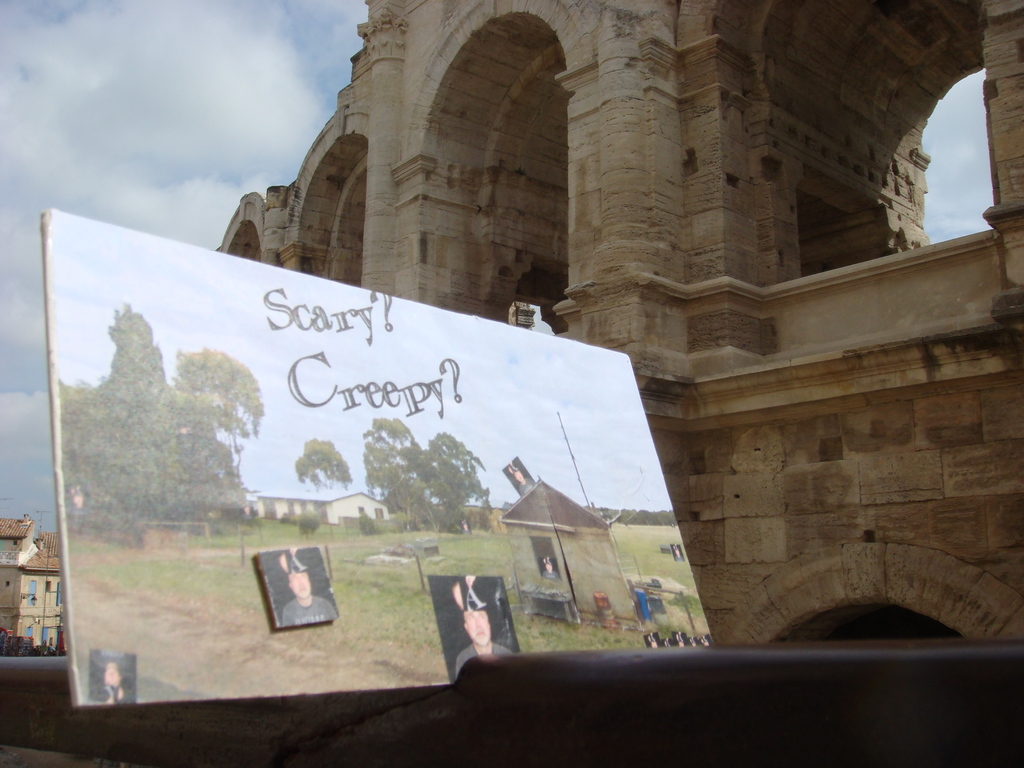 I made one for both David and Vizma when I was in Arles, but there are a few differences.  With a nice back drop like this any of my mail art pieces would look good. Sent to David and Vizma. Once together, now seperated A meeting of historic significance.

David...the cafe was, well, how shall I say it:

The lady / owner was not too happy with us,

good thing we were sitting outside :-)

Did we make a mess? Naw, we made mail art!

This blog is a complete treat. Thanks for letting us be there, David ...