From ARTLIKEART a sweet accordion book "RAIN MTN" with a playful flower landsscape. 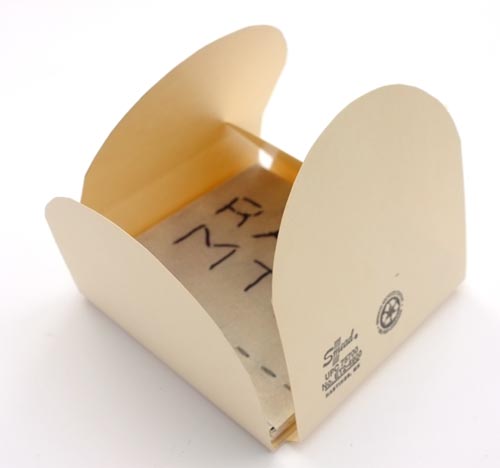 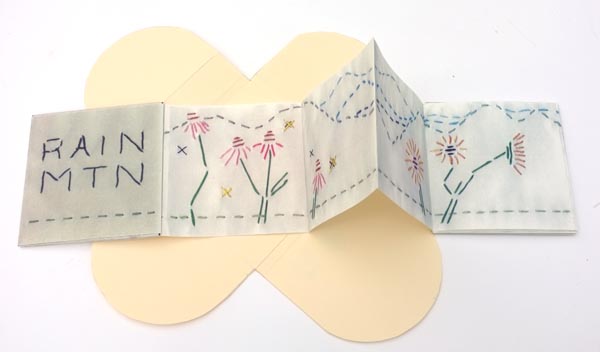 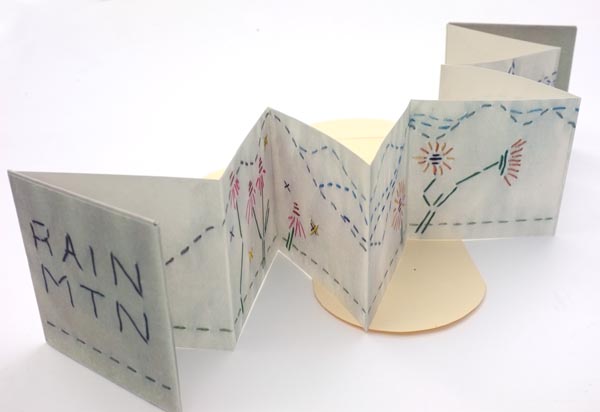 Heavy Metal ...and feathers and ribbons from Dean Marks! And of course we are talking about "naked" mail art items...

no packaging, no envelopes here...pure metal,... and feathers and ribbons, too.

Of course, I did have to go to the post office and claim it,

From Dean Marks a story better than ever! There is something about those Madame Lavoisier's breasts.. :) 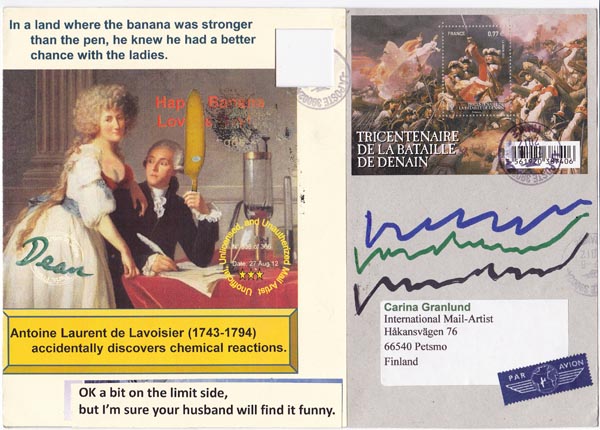 Dean was kindly to send the original on the back of the card, so funny. Thank you Dean! From Val a photo and stilleben with a seamonster…

Beautiful collage and asemic writing from Peter! Very cool to read / see letters from an old fashioned typewriter, wish I had one! The envelope full of surprises, wonderful to look at! The stamps are fantastic. Back of the envelope. Woman…

First up from Elgin the awesome Interface Trashpo Collage from Diane.  It doesn't look like it even lost any bits along the way Diane. I have no idea how you always manage to make everything you touch so trashionable but pretty soon you may be on the run from the trashpoparazzi.  I'll be proud to say I knew her when...  ;) and I'll be proudly wearing my glittery D-KULT for Life…

Ok, "Off-Scene Akademie" wasn't on the package this time, but "Eat Art" must emanate from that view and its priors. Stills of an Apple Biscuit from Germany experiencing life in OOB today: From Svenja...a collage of a God, I really like the foreign word background page, too bad I'm a stupid American who has yet to master even my own language ;) 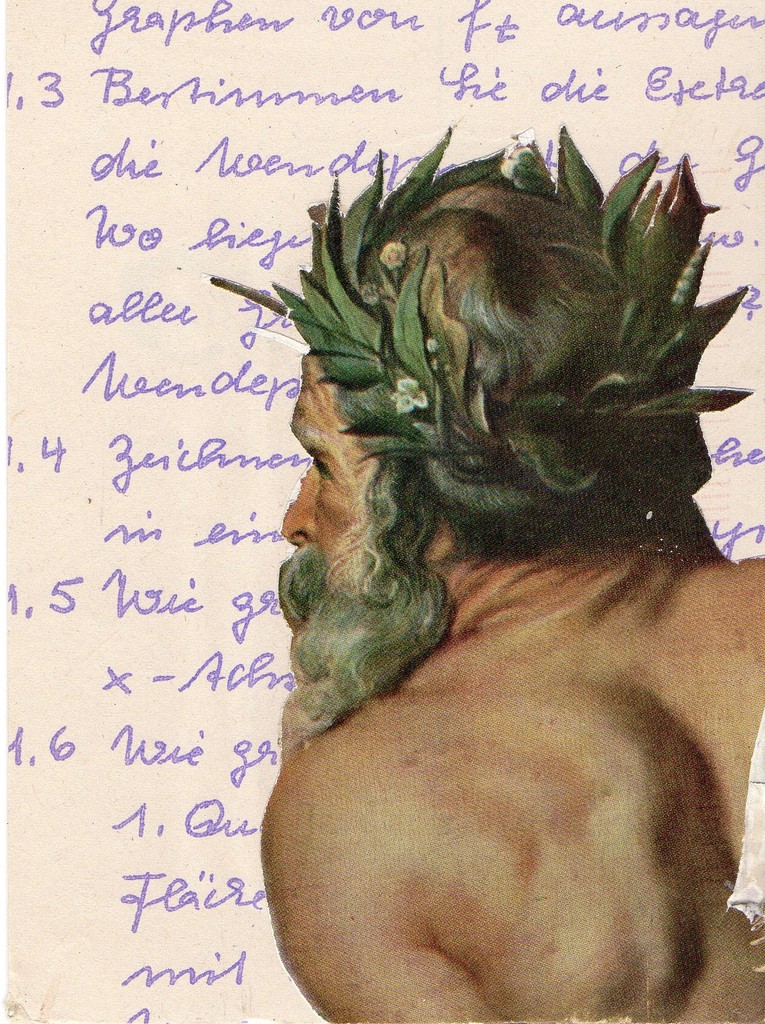 muscles and sweet wishes too First time getting mail from Susan McAllister.  She sent a wonderful…

Yep, just a plain white envelope from Stephanie Blake but inside another colorful envelope and Official Trashpo pins WOOHOO Can't decide which is my favorite...love them both :) 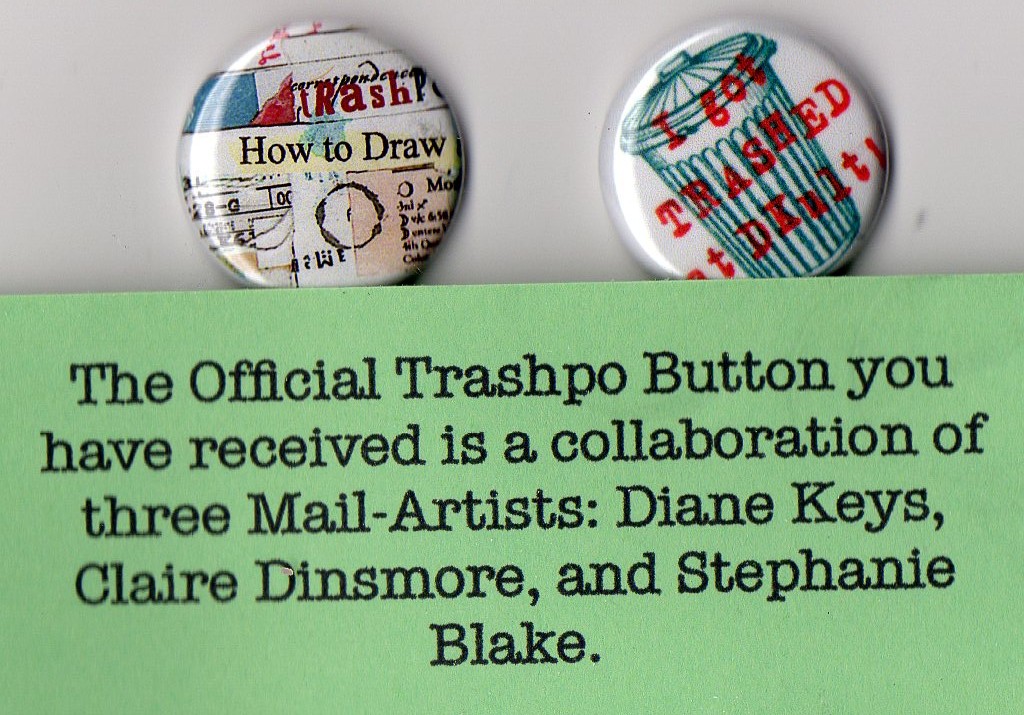 Two from Dean Marks, the first in Celebration of Banana Lover's Day A child eating banana...WOWZA!!! And to think I didn't even know it was Banana Lover's Day. I'll definitely be marking my calendar August 27th so I don't miss it next year...August 27th  :)…

I've lots of catching up and blogging to do so here we go three at a time.  Looks like boys first this time...

A really cool tape transfer piece from Jon Foster.  If you haven't checked out his video on how he makes these yet you should take a minute to do so. Very impressive and he makes it all look so easy. Cans On Blue, from Katerina Nikoltsou

This is the second time Katerina has stitched a found can to a K.N. blue painting, but this time we have 3 at once: There the piece is, now on a wall, as it arrived in a large envelope. Katerina may have thought I'd want to cut the cans free and eventually do something else with them, but this is a work of art unto itself from Kat.'s own mail-art sensibility, and I love it. It…

From Erni Bar, of course, but even extra variety: 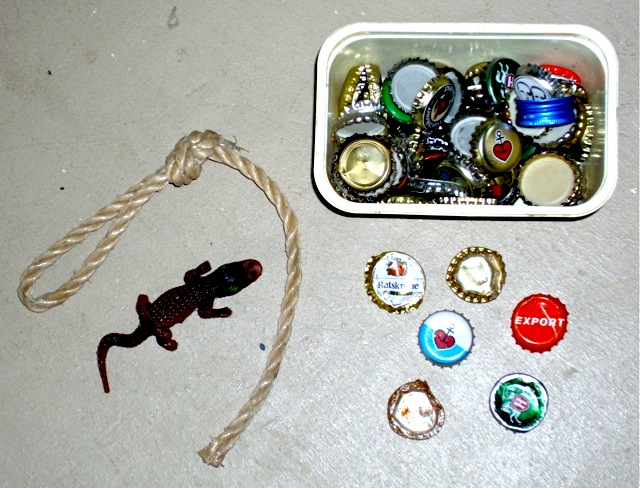 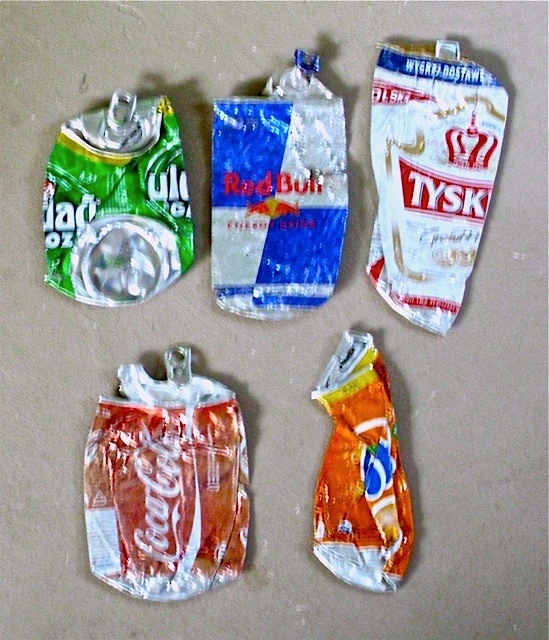 Cameras in Maine don't like close-ups. Will Erni kindly include in a comment his photo of ALL the bottle caps laid out plainly and beautifully? It's posted now at the E.B. Fan Club, and quite wonderful.

THE SEA MONSTERS -- and Val -- GET THEIR VERY OWN GALLERY!

You might have been wondering as to why I have been posting a seemingly endless series of photos about Beach Art (and my 'collection' or 'zoo' of 200 Sea Monsters) and Driftwood Art. Well, read on, and I will try and explain.…

Beautiful envelope and stamps from M. Nidham. Thank you so much. Envelope art and "Travels with Collages" from Guido Vermeulen

Stephanie's post below about Guido's amazing book has me blogging same day as arrival, a rare occurrence. First the envelope art, then a bit more of the book: 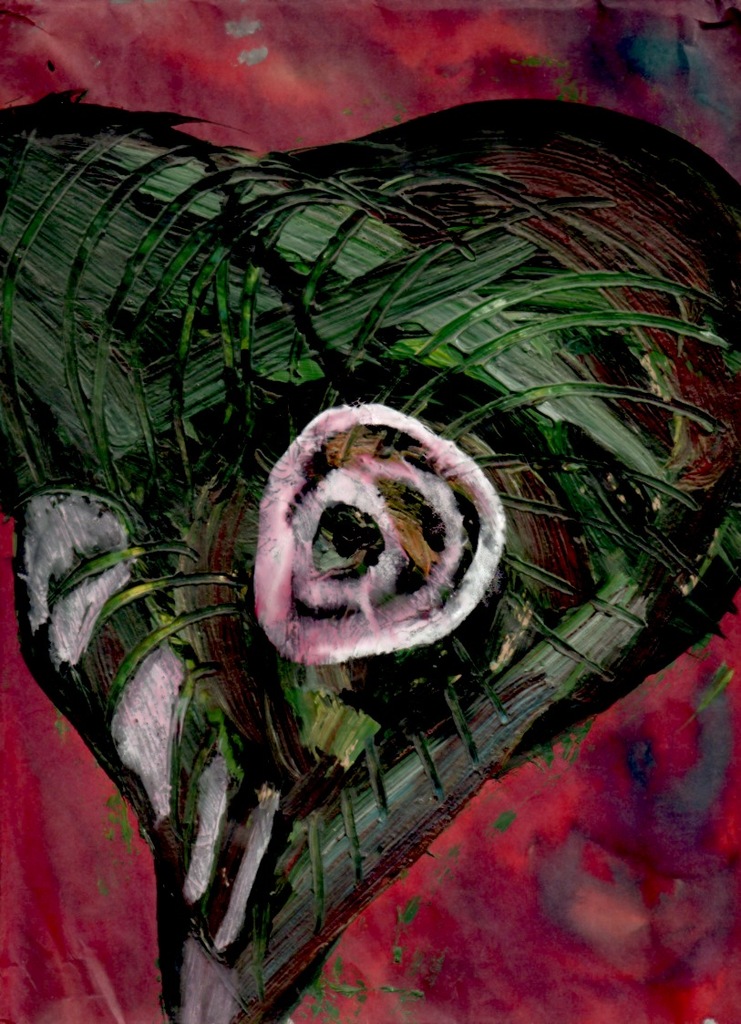 Title: "What hits me in the eye is that there is no end to our imagination." Clearly.… 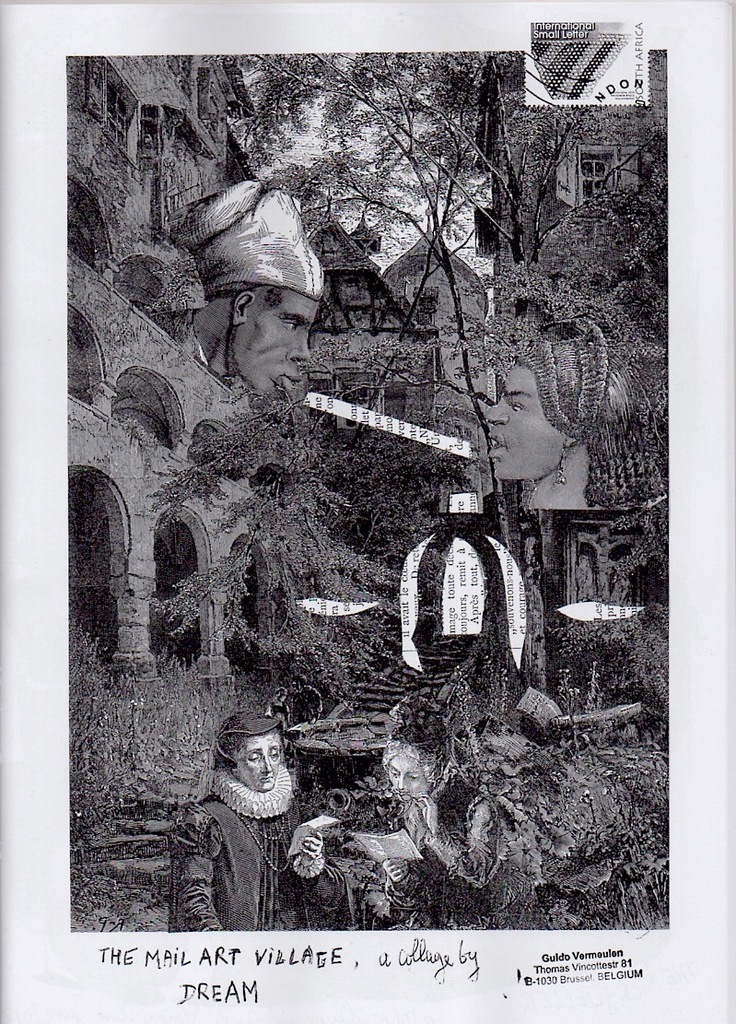 You can see the determination on Ms. Birdies face and in her stride!  thank you Sue... *!*

Contents of one bag from among about a half dozen in Fluxkit by IUOMA member Claire Dinsmore (Pittsburgh, Pennsylvania, USA)

August 30, 2012 : I have already noted a recent trend in mail-art that involves sending scraps and unaltered, found… 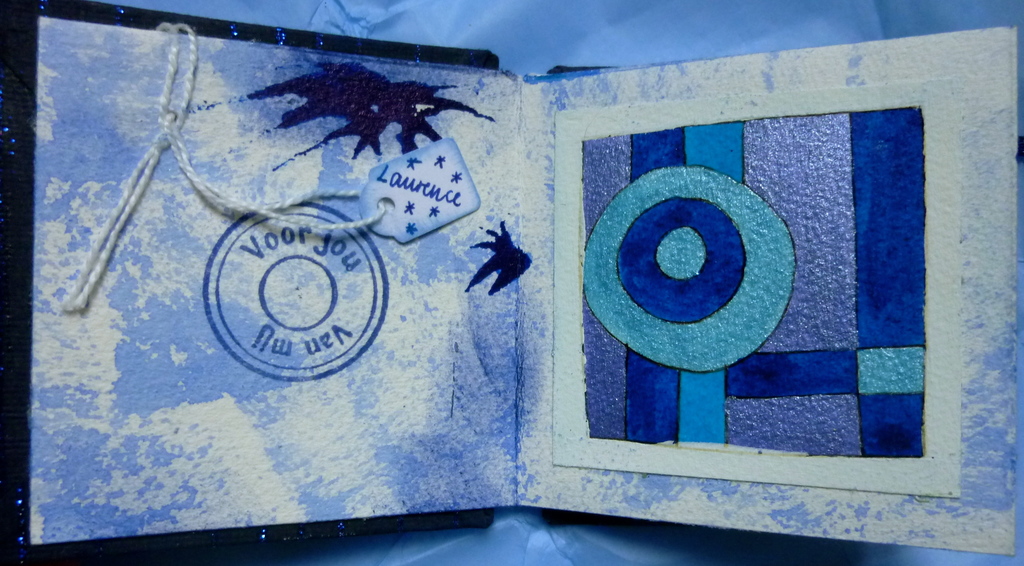 I received, this morning, this beautifull little book from Susanne Schilling ( Amsterdam ). Thank you, Susanne ! 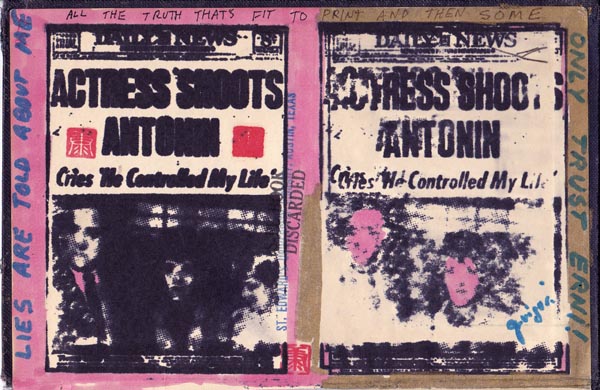 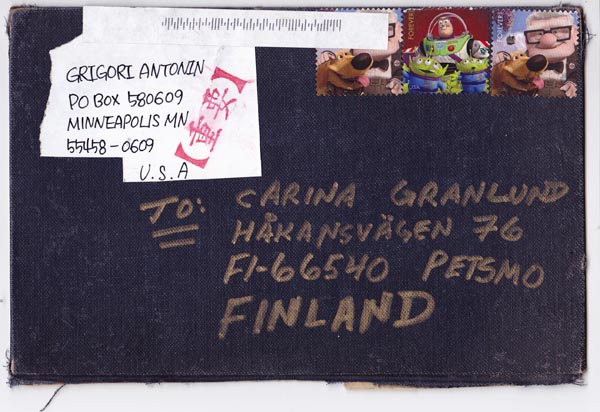 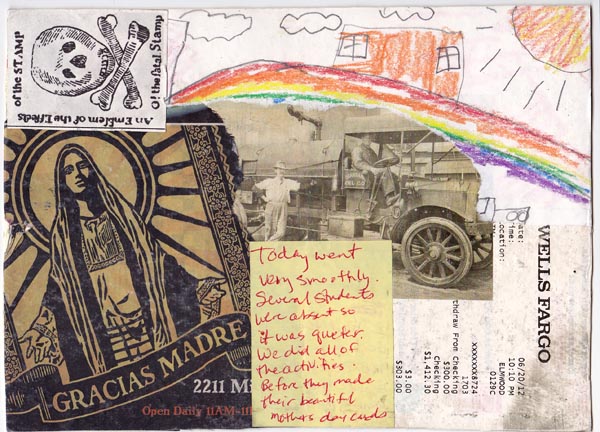