Eduardo Munez on the TV

The Eduardo Munez Letter Project was featured on London Live News yesterday! I was interviewed about the film and took a folder of Eduardo's letters with me! You can watch the interview on our blog here:
http://whoiseduardom.blogspot.co.uk/p/press.html
Thank you everyone on IUOMA who has sent in letters for Eduardo - it's very much appreciated. :-) 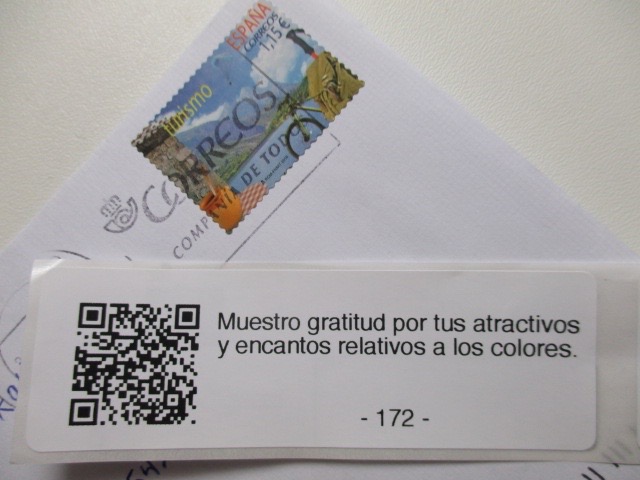 These stickers arrived from Enrique Fernandez in Madrid,Spain,

"Show gratitude for your attractions and charms concerning colors".

To be placed at various locations and… Both are ready for more.  Because he's a true rebel and so rotten. (This is my own German translation, so please do not quote me.)  Really I have no idea.  They say it's still winter in the north of Germany.… Terry sent this flying lady ATC which I love as well as this finished trio ATC jam: The jam was worked on by me, Grace Sanford and of course Terry. Finally she sent along this fantastic little booklet. The scan just looks like an A4 sheet of paper but…

You folks who know about postage stamps and first day covers and all that stuff, I think I made a horrible faux pas by opening the cellophane envelope that this really nice PC from Finnbadger came in. It was actually postmarked on the cellophane, even though the postage (Fire Monkey) was inside. I have a feeling this was a boo-boo, philatelically speaking.

Anyway, I kept the cellophane and so maybe all is not lost. And I LOVE the monkey!

So happy Mars Tokyo has returned from oral surgery Hell! Here is a big beautiful PC she sent me, vintage lingerie with great old postage stamps at the four corners. Welcome back Mars!… Sheri makes wonderful ATC's -- she sent me two pairs, themed to go together. One set has the theme of time rushing by and how we are sort of stuck with the life we have, sometimes without seeming to have had much choice. Very poignant, especially the lady's face under the watch face on the "Time" card. That's real fabric with the fringe--it lends a very strong textural element and is exactly the right color and it looks old--just great. The other set is really sweet -- the bird one has a…

Received this wild PC from Amy -- it's got everything: sexy women (at least parts of them), big carnations with huge eyes, paint, paper, spots, and some interesting asemic writing at the bottom. Whew! The amazing thing is that all this made it through the PO, I think undamaged. Thanks Amy!… Grace makes the most beautiful rubber stamps I've ever seen -- I totally love the triangular one on the back of the envelope that looks like a mystical symbol and indeed it is -- it says Mail Art! And inside was a lovely handprinted card and inside of that was my piece of a Trio Jam that I started, Mail Art Martha and Grace both added. It's one of my very favorites and makes me smile every time I see it on my bulletin board!…

My first Mail Art from Tic Tac -- and it's ARTISTAMPS! Of Cows! With Banana Horns! I can't tell you how Moooooch I Loooooove these ladies. I assume any cows as pretty as these are lady cows.

And she sends me a photo of the cows when they're relaxing, not posing for Artistamps with Banana Horns. 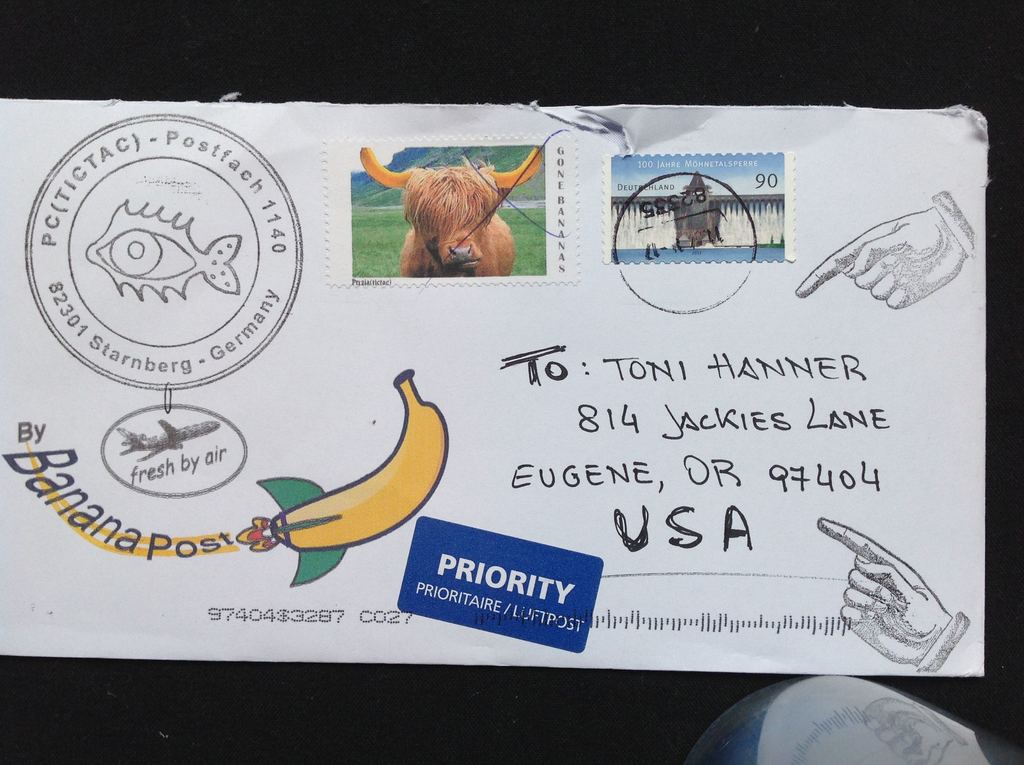 Oh, and the envelope is pretty…

Tina is doing the 365 Postcard thing--and if I were doing that it would be pretty slapdash, but look at this! A beautiful altered postcard with, on the other side, fabulous hand made art with a tiny envelope attached. The envelope was so pretty I didn't want to open it but she said I should, so I very carefully peeled back the stuck flap and inside was a tiny copy of a Thomas Lux poem which PERFECTLY fits the front of the postcard. Amazing!  Thank you so much Tina. This will be a favorite of…

Here, belatedly, are some pics of the truly In Seine Banana Mail Dean sent me. These were tastefully packaged in battered celophane and staples. I'm afraid opening the mail pretty much destroyed the "envelope" but fortunately the contents were protected! Now I don't have to worry about my next Halloween costume, that is if I can just figure out a way to make this thing smell a little less awful! Dean, this thing is hilarious -- reminds me of the kind of junk they used to sell on the backs of… 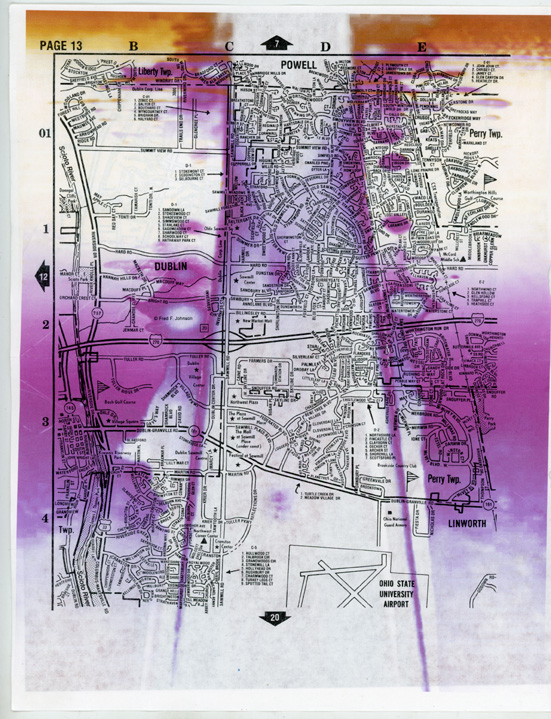 Front and back of a stained map. 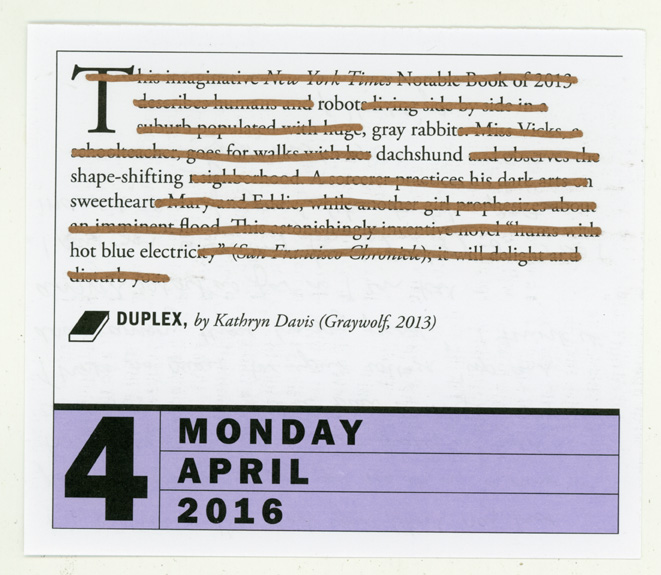 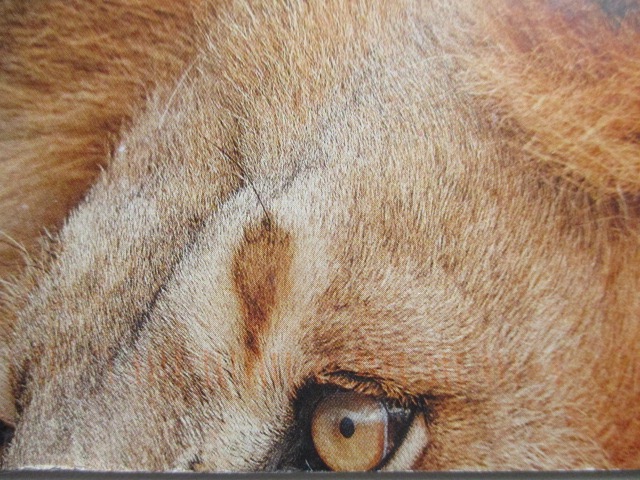 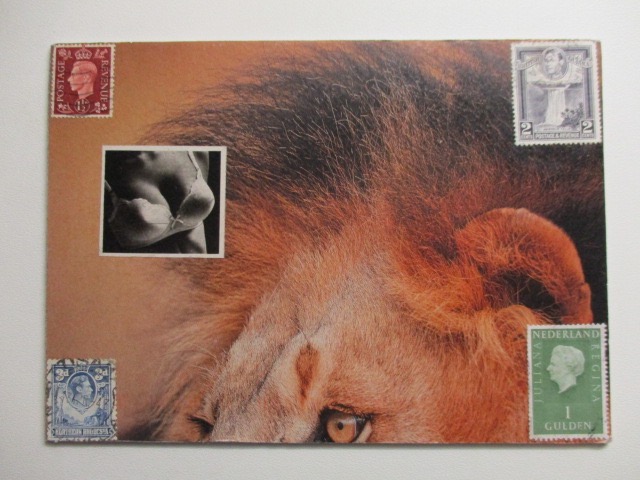 April 29, 2016 - Artist, network scholar and IUOMA founder Ruud Janssen has been very supportive of the Trashpoets and DKulters. The Trashpo “movement” in mail art…

I know that some of you were very worried and thought I had de-railed Heleen from her pen with my barcodes.  But you were wrong to be worried.  She's Back !…

April 28, 2016 - Some networkers and observers lament the lack of the “political” in contemporary mail art, implying the situation was once different. Others…

an offer from "the Sticker Dude"....Joel Cohen

Hello, I might have mentioned this already. I have tons of card stock already cut to trading card size, 2.5 x 3.5." - Several kinds, white, colors, black/white duplex, etc. Do you know any people/artists who might want a bunch for the cost of postage only? Even a dollar (.92), 3 oz. would bring about 40 cards. Feel free to pass this along

One more thing, if you do pass this along. Of course give the Ragged Edge Press…
Continue

Lynn had sent me a couple of Add n Pass Sheets enclosed in this nifty artie envelope...front and back...