I received this collage postcard from Jay Block. Mail art from Marcela Peral and from Samuel Montalvetti of Argentina arrived together. Rare sighting of Marcela after a long absence, good to see her art work!

And from Samuel sends an envelope full of goodies:… 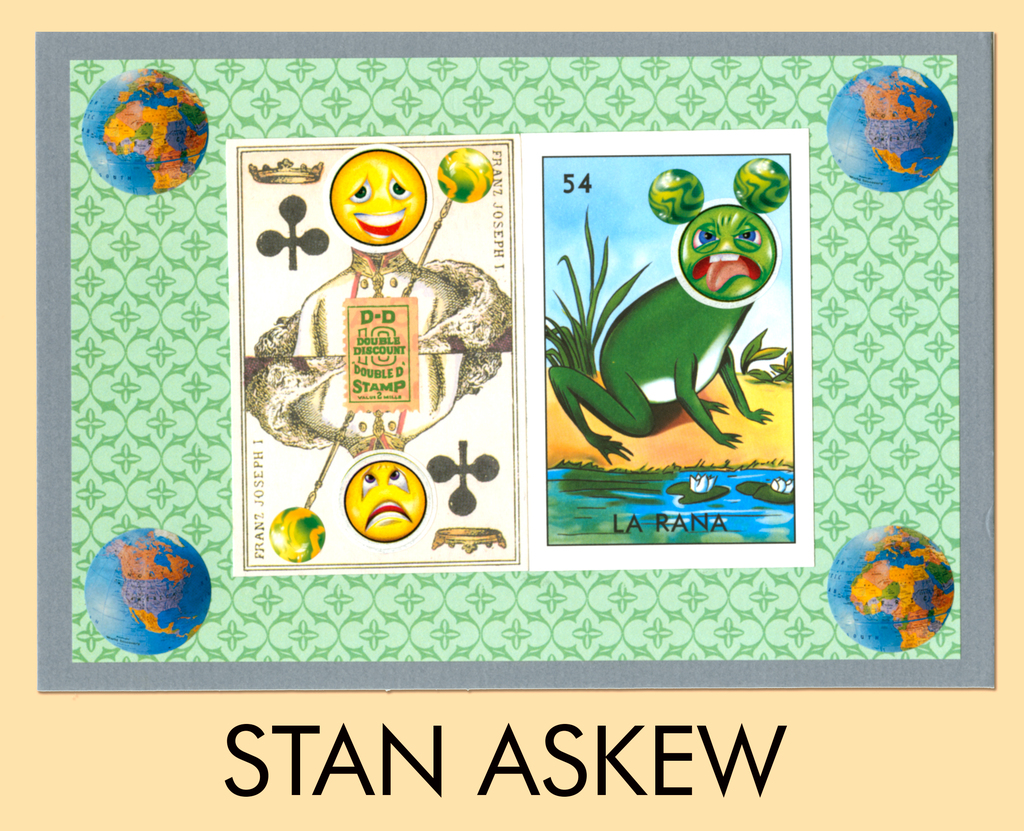 Rachel is doing the mailart 365 challenge and these were blogged as number 233. I liked them then when I saw them online and I like them even more now they are on my desk. Great stuff. Thank you Rachel.

Dean, Dean, Dean - who else could it possibly have been...? Yes, the elastic wraparound is pants for each day of the week. Please draw your own conclusions.

Dean - thank you - this one had us laughing in the aisles!

Unable to upload them all…

Collab Cut-Up by Richard C. and me

Just hooked up my 10 year old scanner to see if I can speed up the documentation process -- seems to work! Meanwhile, fun with Richard's poetry.... 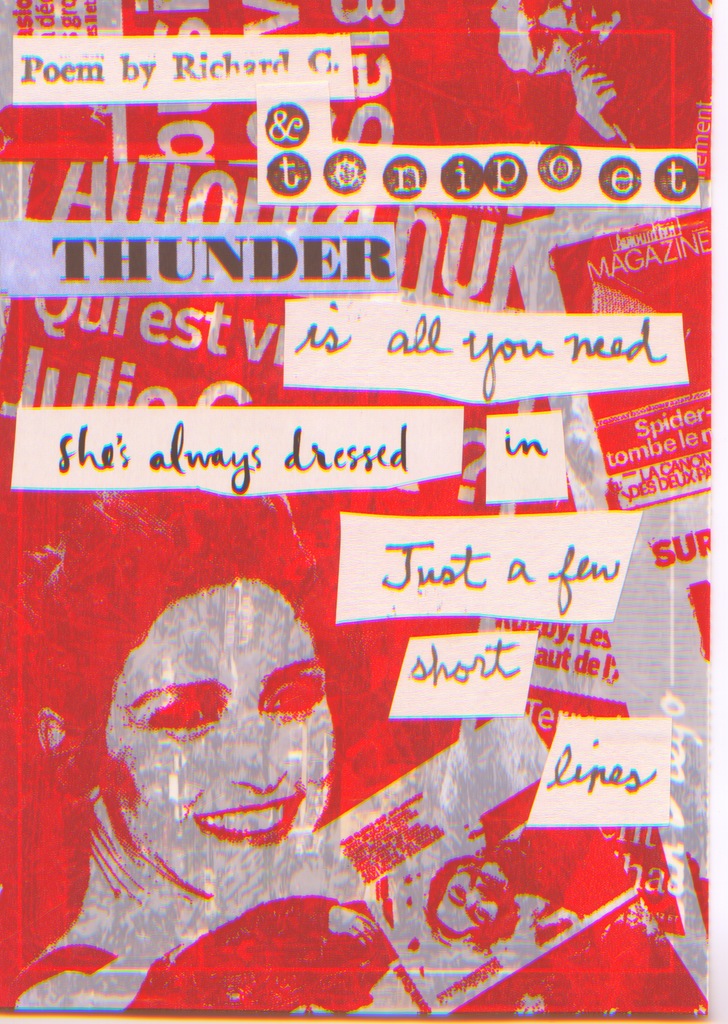 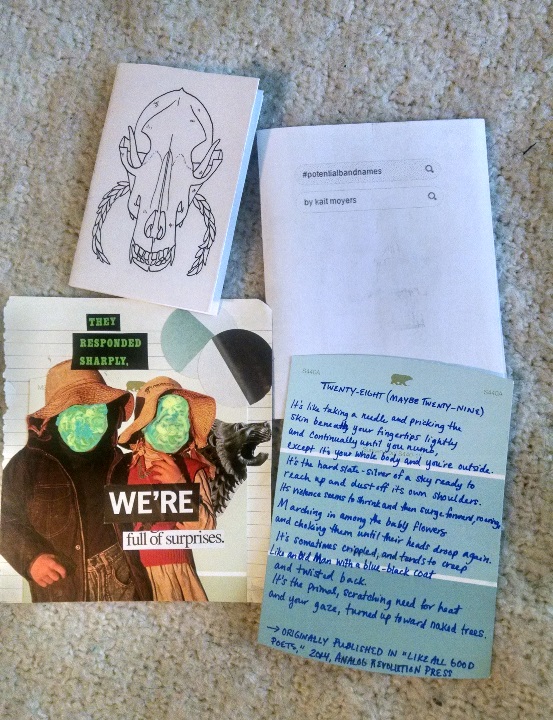 I received the above items from poet/artist Kait Moyers, who goes by "mothpuppies" on Tumblr. To my knowledge, Kait is not (yet) an IUOMA member. We met on Tumblr, where she expressed interest in some of my poetry, so we decided to do an exchange. As you can see, the work above would be welcomed by many other mail artists, and I am sure if she so chose, she could…

My apologies for not sharing these sooner, they're great! Thank you very much everyone. 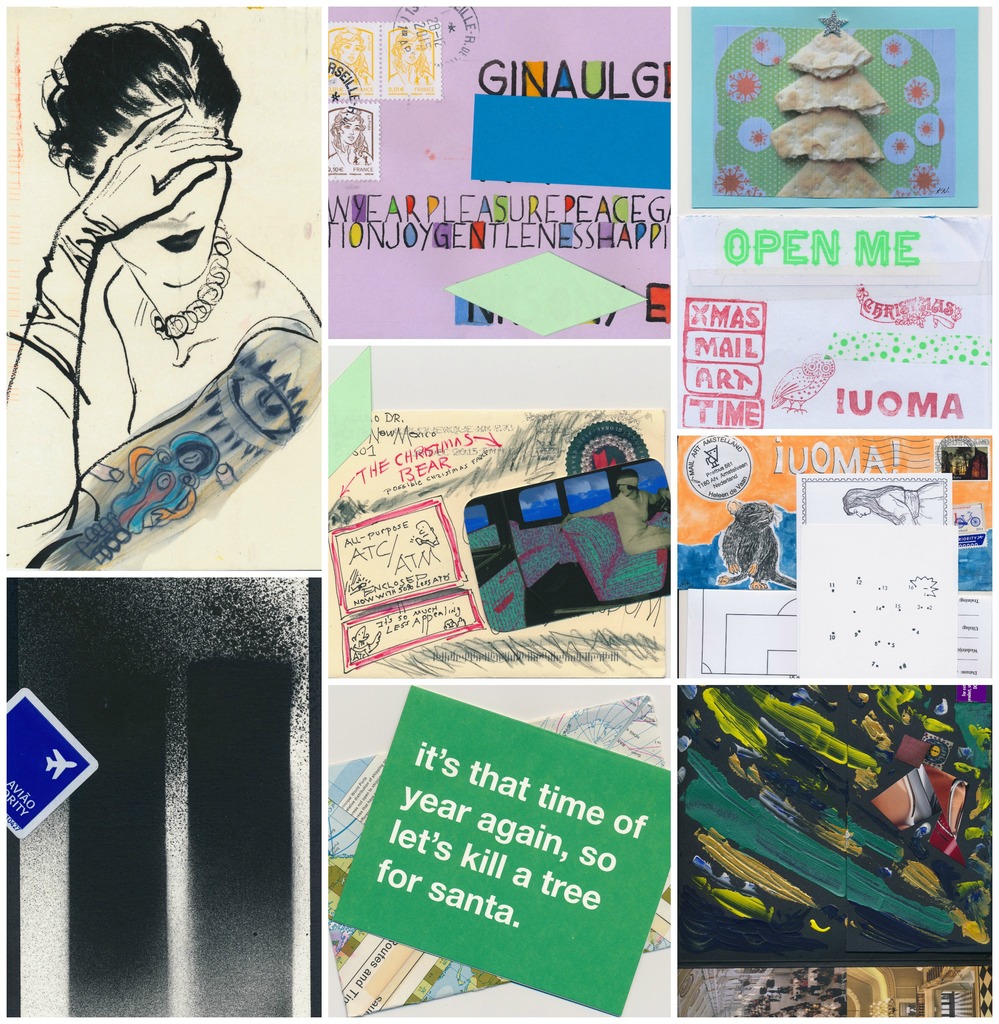 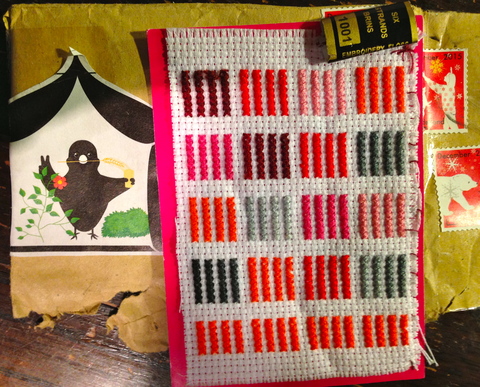 This is perfectly executed - so neat and even, and the colours not in an obvious pattern but balanced. I could stare at this for quite some time. Very satisfying. And Suus has re-gifted a shadowbox to me, which I like very, very much too. It's hanging from my desk-light, so thank you to someone who made this and thank you Suus!… You've got to love this! Though I'm a bit worried this bird is being chased... Thanks MG - it's a real good'un. especially for the minizine - dreams and playgrounds and dark, dark restaurants...

In Which I Receive Mail for Luther Blissett (Richmond, Virginia, USA)

January 30, 2016 - Someone in Richmond, Virginia is either a Neoist from the Golden Age or someone who knows a good deal about Neoism. I do not… Blogged all my <Mail Art IN>, so please keep mailing ;)

After computer locking up, here's the rest of the blog post from Cuan's package of mail art (I hope).… 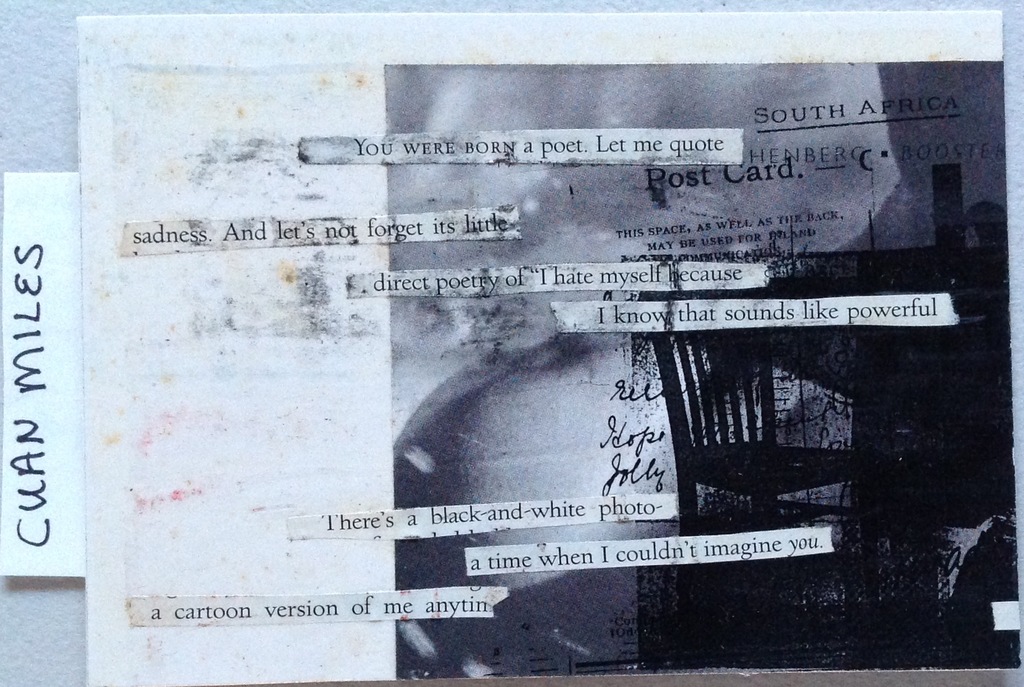 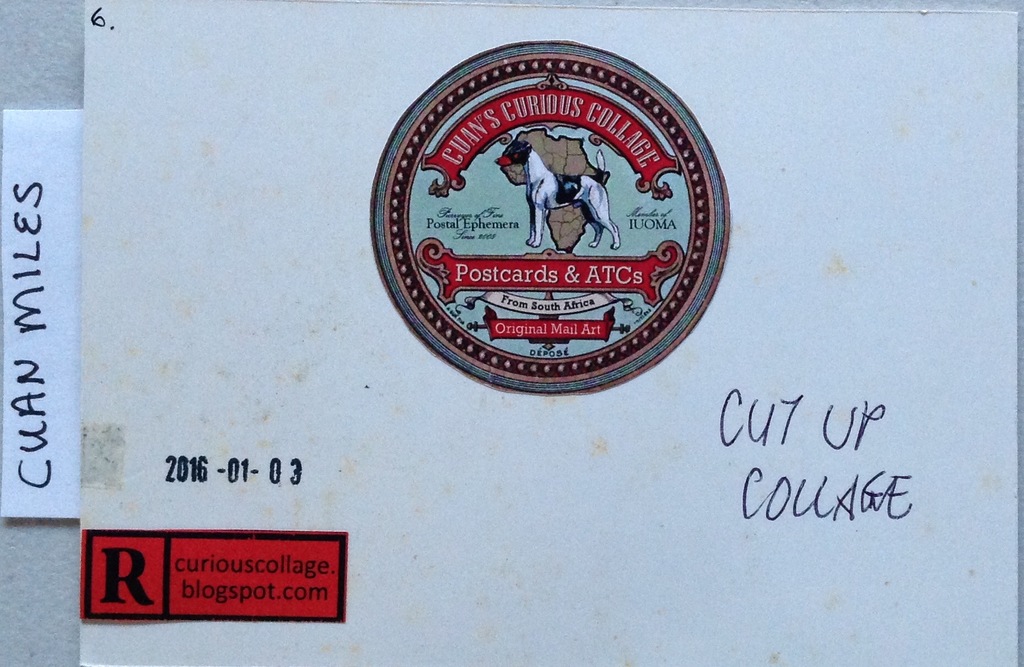 Cuan Miles of South Africa sends me some "random art"

What a fascinating package of art from Cuan. First, the envelope is made from a print I think I've seen before -- it almost looks like a book cover. Then a really strange collage that is torn and deliberately blurred--I don't know much about how this is done, maybe a transfer? People in extremely weird costumes and the word "inclusive" below them. Plus, two altered playing cards and, if that weren't enough, a wonderful cut-up poem, on the back of which is his really cool round label "Cuan's…

Marvelous Mean Brush Day PC with great artistamps including a "55 Birds" and a "Head Project 55 Tents." I hope I don't ever go into my studio and find my art supplies have grown sharp teeth!… 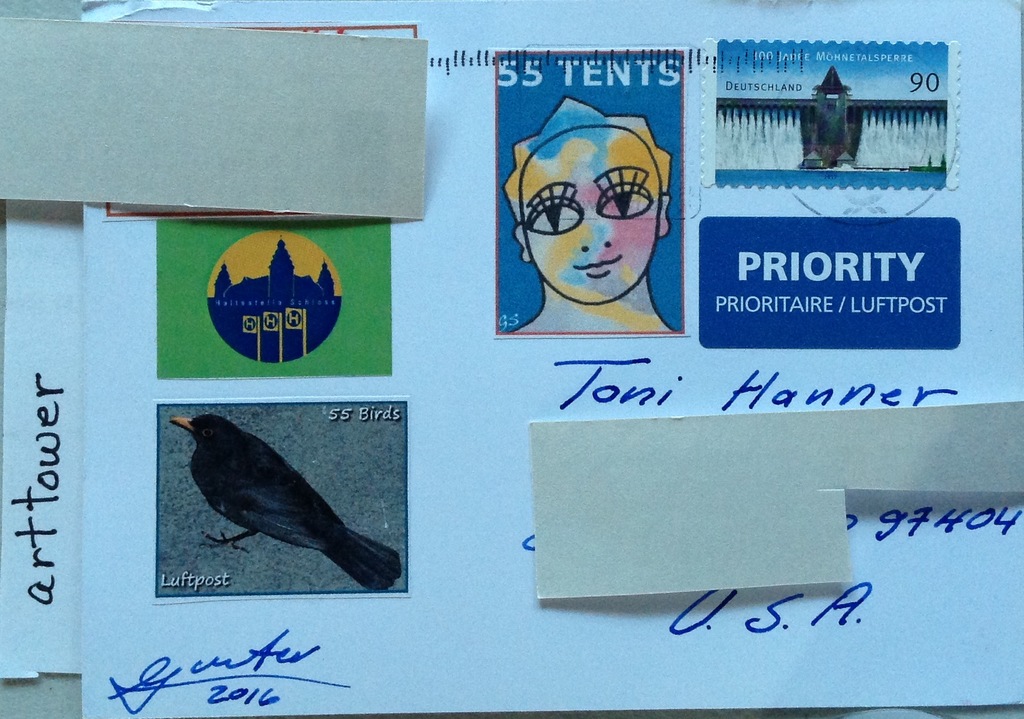 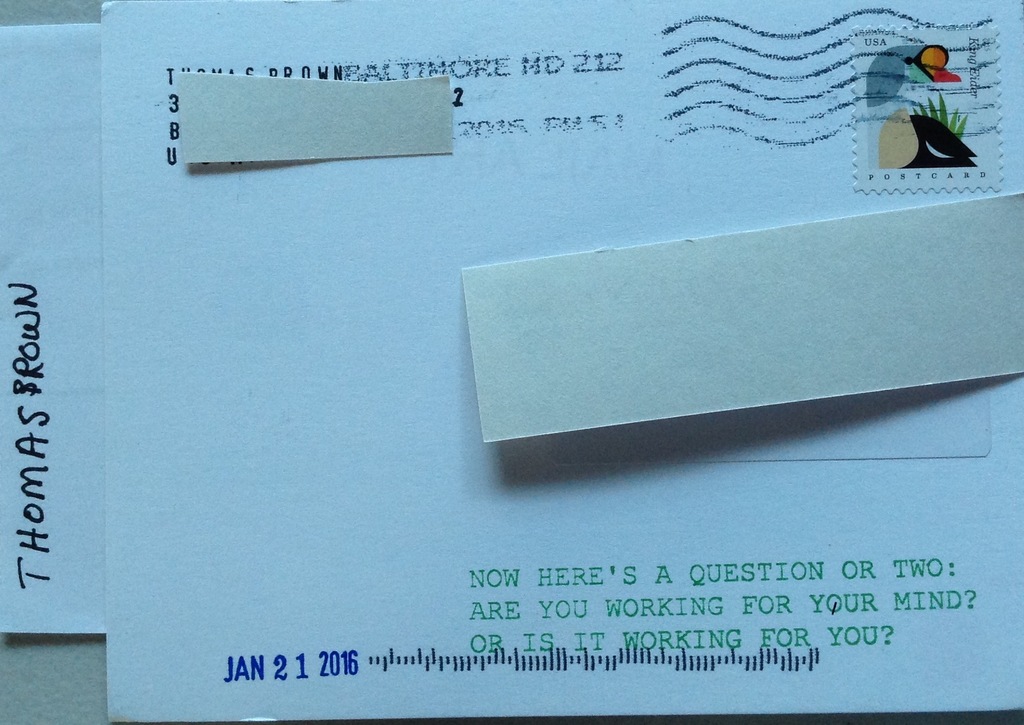 Look at this lovely envelope from Gail. The back is even prettier than the front. Plus, a collage with cut-up and an old-fashioned valentine! I haven't received a valentine like this in, well, ever. Thanks Gail!… 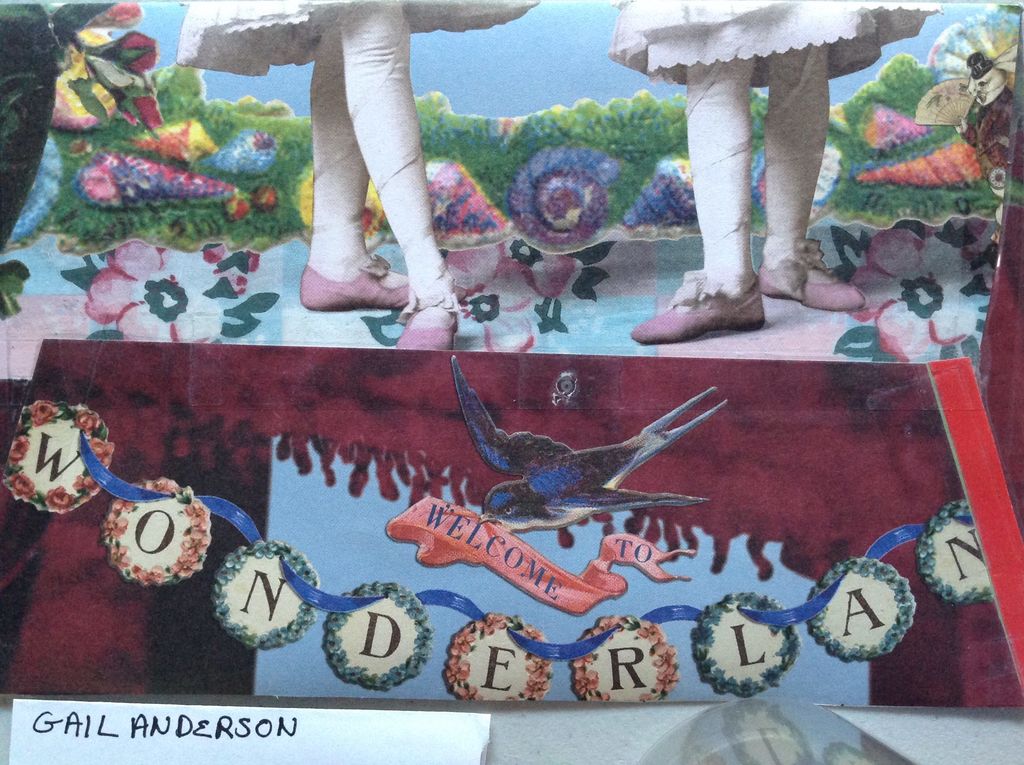