What are your thoughts about this project? Would be interesting to know what you think. Do you participate. Since when, How much times. Do you know the concept? Will also try to publish a few samples here (or others can help me with that)

Permalink Reply by James on October 10, 2010 at 5:08pm
Since I found this thread last week I have been thinking about it and finally sent in something. I am so excited to see what happens. It is really amazing that he manages to do this so often. I hope it continues too!

It takes some time for Ryosuke to add your image or stamps to the next edition and then send you a copy. He is doing a new one every 10 days... so while you are waiting to see what happens, send him something new every 10 days. Great mail art work! It surprised me a lot when I received this brain cell form nr 761 in my mailbox, July this year. Especially as this came totally unexpected: until then I only expected entries for my own project. So first I did not know what to do with the sheet but to put it on my mail art project blog. And after reading more about the Brain Cell project I got excited by this great idea to connect artists all over the world, and by the artisanal way Ryosuke Cohen creates these sheets. So I sent 150 equally stamped small papers in return to Japan in August. Now looking forward to see what mr Cohen would have done with my contribution (so far I don't know, and yes, it's the very first time for me).

I'm glad to have found this thread, which makes it possible for everyone to see more Brain Cell Forms!

Thanks, Ruud and everybody sharing the amazing forms, and many arigato to Ryosuke, for your work (already 25 years!?!, wow, my compliments!). 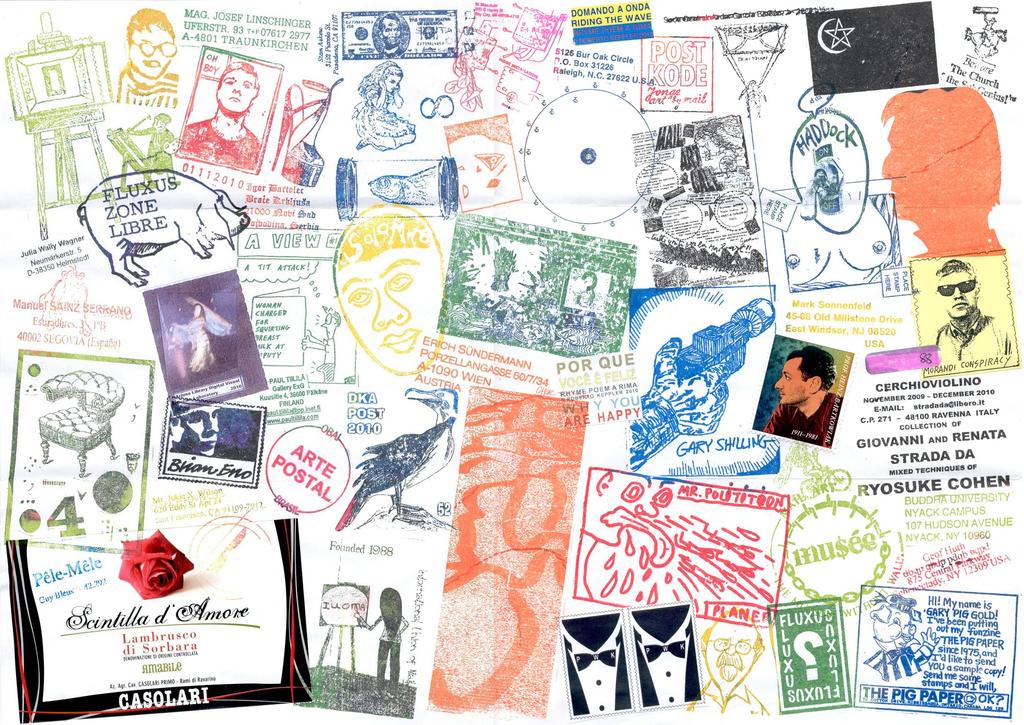 (see also http://realweirdanimals.blogspot.com/2010/11/ryosuke-cohen.html - the image and mail artist-list there you can see enlarged by clicking on it) (see also http://heleendevaan.blogspot.com/2010/11/received-from-ryosuke-cohe... for an enlargable version and the mail artist list)

Permalink Reply by Tomoe N on November 10, 2010 at 6:49am
Hi, I am about to participate the Brain Cell. I am little confused what to do. He stated to send stamp or stamp design or stickers. That I understood and I am thinking to send some stamp designs. I wrote him and he just sent me a sheet collage image of stamps and sticker and a sheet of address.

What to do with the address? Does he wants me to send the sheet to the people on the address, or? I suppose the stamp design will go to Mr. Cohen though. Little confused.

Can someone explain to him. He just wrote me on the sheet that than you for the email. You can send me whatever. Do participate Brain Cell. (in Japanese) I can ask him again, but I would like to ask people who have experience with it too.
Thank you!
Tomoe

Permalink Reply by Tomoe N on November 10, 2010 at 1:14pm
Thanks Helen,
Actually, just by emailed him, I already got the list of address already, but I did not send him anything yet. That seemed a reverse order with his instruction so I confused. I will just send my stamp design to him, and send to him, and see what will be happening. (I am thinking to make several design stamps and print all of them on one sheet of paper as a printmaking design. That makes as practice of making stamps for myself and for the online art class that I am doing.) I live in the same prefecture with him in Japan, (like a state for the US) so it just takes a day to get to him.

Stamp curving is kind of new to me. I am trying to curve rubble block which I am not used to. (but I have done woodblock and linoleum printing) So it takes a while to get a hang of it, and because I am using a cutter knife and curving knives, I don't want to do it when I am tired. I try to do little by little, but I enjoy the learning process. smile. (^_^)
Tomoe 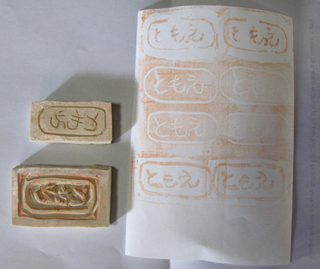 Permalink Reply by Tomoe N on November 10, 2010 at 1:39pm
Thanks for the tips!
Ahha, I forgot to tell the meaning. It is my name in Japanese.
I can send him a stamp too, but I would like to keep my new experimentations and use for myself again, so I would like to send the prints of designs.

I do have small linoleum blocks and Japanese printing board in a postcard size. In Japan, making stamps with eraser is popular so they sell the postcard size blocks special for it.

Permalink Reply by Oh Boy on November 11, 2010 at 5:09am
The sheet collage is a "Brain Cell" is is made up of the images and stamps people send Ryosuke.

The sheet of names and addresses is the participants in that "Brain Cell"
It list all the people who's images or stamps make up the collage.

He has done 778 of these collages in editions of 150 each.
If you send him stamps or stickers of your design, you should send 150 so each collage will have one.

If you send him an image, he will use a small silk screen printer to add your image to the collage.

Permalink Reply by Tomoe N on November 11, 2010 at 7:01am
Thank you. That makes sense.
I have gotten the address sheet 779 and image of the sheet. I guess these images are from the artists from the list of the addresses then. And I see now, my address would be the next which ever the collage set then. I hope)

Yes, the names and address are for the artist that participated in that edition.
If Ryosuke uses your image, he will add your name to the documentation page and send you a copy as well as the Brain Cell collage.

It takes time to send something to Japan, for Ryosuke to add it to the next Brain Cell and send the completed edition out from Japan.
If you wait to receive an edition before you send him another image, you will miss out on being a participant.
Send him something every 10 days.

779 editions x (approximately) 50 participants = 38,950 mailed out
plus all of the ones he sends to non-participants and to mail art shows.

Here is the latest from the Ray Johnson Book about Death mail art show.
It has images of the show's reception and an area displaying 10 Brain Cells.

Permalink Reply by Tomoe N on November 12, 2010 at 1:07am
Oh, I am in Osaka, Japan, as same as where Ryosuke is. That was why when I sent him email inquiry, he sent me snail mail soon.

I don't care too much which number I will join in his image. I am taking an online art class. I am in Japan, but I take class from San Francisco USA, which I used to be there. I am doing Independent Study with a book art instructor, so I kind of do projects with my own plan. For some projects I give the reason to join with mail art projects and at the same time I will make my own works. Before this, I just sent to Journey to the East to Indonesia which I joined also the 1st exhibition last year. I did box art and sent then. They said it will be installed in a temple (became the theme is "peace") as permanent collection after finish the exhibition which seem very nice of them.
http://www.flickr.com/photos/galicias/sets/72157625138881137/

So in my class, I have been wanting to make my own rubber stamps, so I also include the Brain Cell as part of the goal. That means, I am first taking time to practice learning stamp curving and make my own stamps and by the time, I have something that I can send to him, I will send. We (me and Mr. Cohen) are in the same prefecture so it takes only a day to get my snail mail.

And it does not really matter even if my stamp does not fit for his project, but I want to acquaintance with him and just want to give him a letter, since we speak the same language (Osaka direct) and live in the same area. I was really surprised that there is a world known mail artist in Osaka, and I just knew him about it lately. haha. Surfing on net with his name and it hits many in English sites, but not many in Japanese.

Permalink Reply by Katerina Nikoltsou (MomKat) on December 1, 2010 at 2:21pm
Brain Cell #779 just arrived in today's mail, 1 December 2010.
"FLUXUS GREECE" stamp got on and also many great stamps and images. 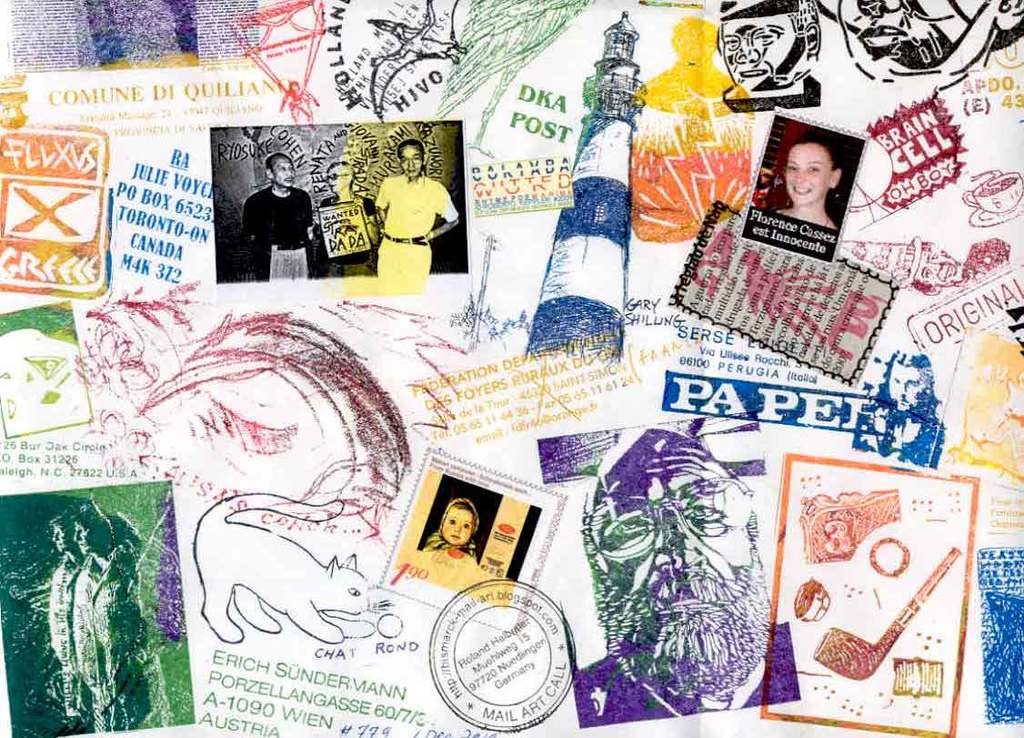