Richard and Nancy: Together Again A great honor to receive a card from Richard Canard whose reputation for aphoristic wit rivals Nietzsche in pith, Bierce in ferocity and Henry Gibson for a third thing which escapes me at the moment. I'm not exactly sure what Richard is up to as this is my first Canard (technically then I am unable to say "O that old Canard") but I think one interpretation might be that Richard spied an opportunity to vent via the encouraging packaging for Angry Richard's Soft Cider. For on the back he reveals: 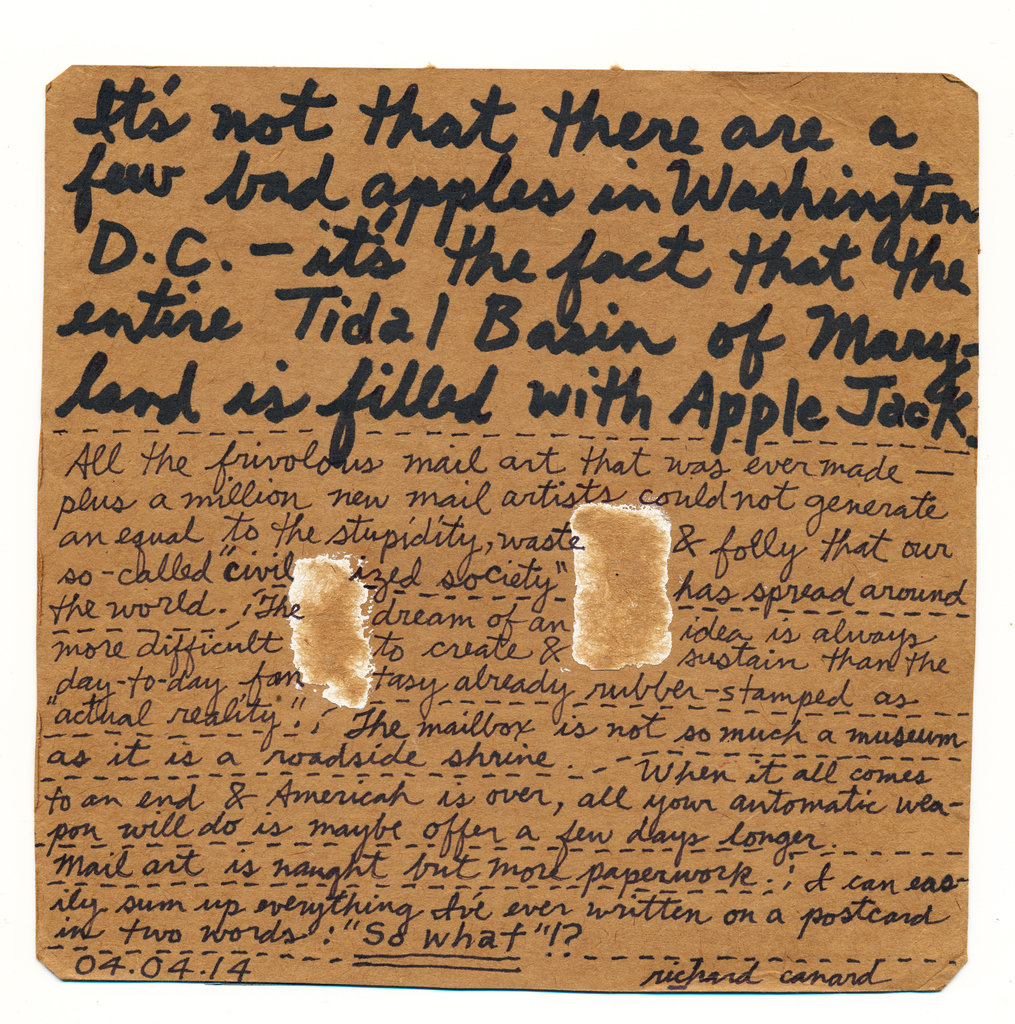 not one but seven rants. It all boils down to a bilious "So what!" A Bravura(o?) performance as Richard inhabits the character of Angry Richard right to the bitter end. I offered an alternate explanation on Richard's return card so we'll see what unfolds. At any rate...a deep bow from an admirer. Thank you, Sir Richard. 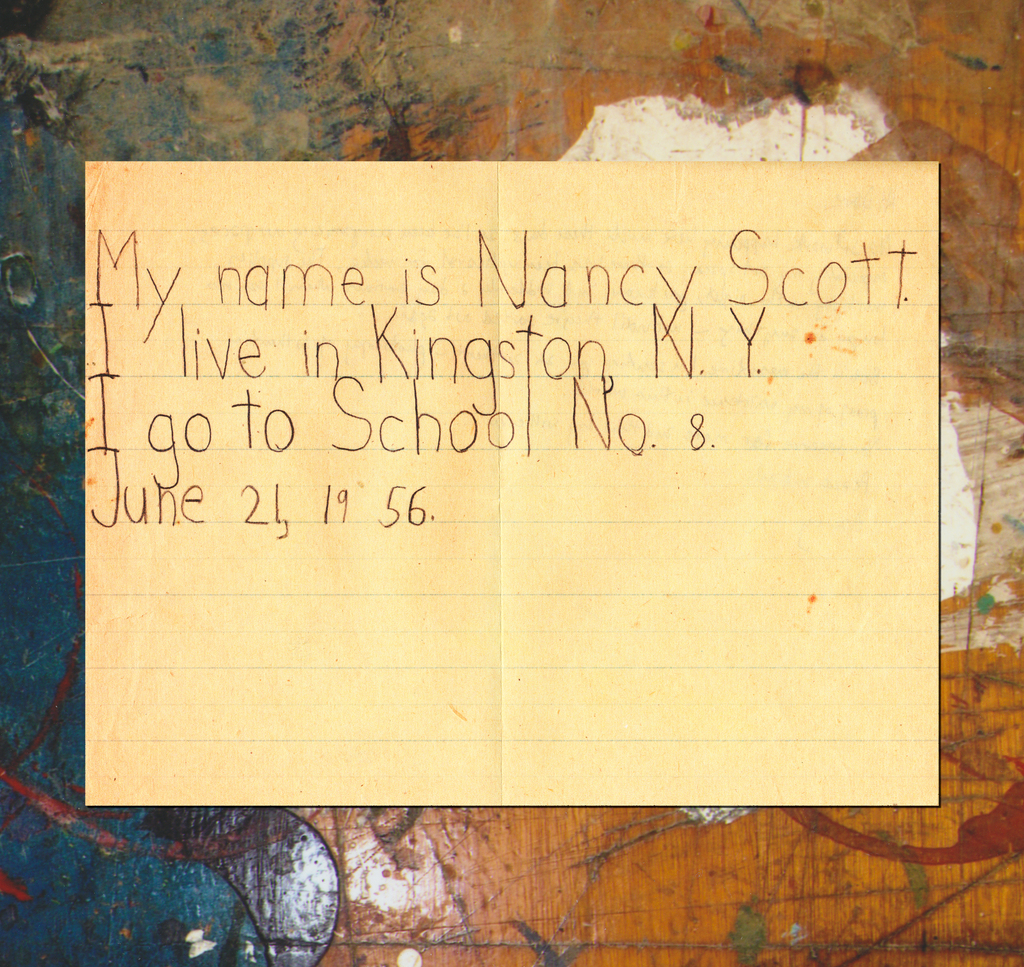 Nancy Bell Scott sent me this essential piece of school days ephemera. I am still struggling to learn these letter forms. I placed this on top of one of Cheryl Penn's exquisite school desks. Nancy sent me this a few day before I went on a spring cleaning binge and like a hog rooting for truffles I managed to turn up this amusing piece of my past. I thought these had a certain symmetry. Thank you, Nancy.

Yes, may we all have a chance to experience it. It's strange to have that chance almost daily, and wish sometimes fruitlessly that all the people you love could/would do it, to realize themselves + the world and feel that kind of freedom in it. "The total joy of pulling strange things out of your brain"--yah, it's always new (certainly with your universal-interestingly-disguised-as-personal brain :--) ... the happy accidents ... things that come unbidden ... all of it you put words to here. Thinking of Updike not too miserable to write, what more could a person ask for.

The envelope sometimes can be the most surprising thing to show up. People need to remember to notice it. Mail art is huge in this way. If you didn't before, eventually you let yourself be stopped short by the supposed-appetizer envelope. Often I have to force myself to put dents in it to get it open, when it seems plenty enough all by itself.

Hey, thanks Nancy. I would have to say that just about anything you send me falls into that category. Headed your way is some ephemera of a personal sort.  It turned out that the envelope is probably more engaging than the contents but that's the way it works sometimes.

One other thing that's been on my mind regarding this thread of mail art and its place in the world of creative endeavor. I came across this in a review of a new biography of John Updike:

"He was cheerful by nature,” Begley thinks. As he points out, even in the anguish of marital breakdown, Updike was miserable, but “not too miserable to write.” He never tired, the biographer concludes, of what he lovingly called “creation’s giddy bliss.” Almost up to his “endpoint,” he was writing his moving last poems of illness and memory. His last story, “Full Glass,” ends with a “strange old guy” who is “drinking a toast to the visible world, his impending disappearance from it be damned.”

Creation's Giddy Bliss....That's what all art should be about. The total joy of pulling strange things out of your brain. It's the joy that enabled Roger Ebert to transcend his illness which would be devastating to most of us. But he could still write, he could still experience "creation's giddy bliss" which a religious person might frame as a portal into the Godhead. It certainly isn't about ego because the things you're most pleased with are the happy accidents, the left field connections, the things that come unbidden, circumstances in which the filters that blind us to the light that emanates from every single thing fall away and the doors of perception open up.

Clearly I should have been a minister. My impulse to preach is so annoyingly ever-present. But...I do love that phrase, "creation's giddy bliss." May we all have a chance to experience it.

Your flickr stuff is a blast, Dave, and certainly vibrant. Love the Big Hair Ministry building, and especially your Family Reunion--it's fantastic. One of those "oh I wish I'd done that" things.

I received a comment from RC (can I do that without him mouthing off about it?) on my page and apparently he liked something I said about the Cold War.  Apart from us having another Cold War soon, he was following my output which charmed me - I love skeptics and people who use veiled humor.  It is as if they have a truth and others are wrong.  But don't let me fall into that theory...theories are theories as apples are apples (unless you happen to be a canine with 2-cone vision rather than 3- cone vision, which results as red being possibly 'grey'?).  I tend to be scattershot so I enjoy a round of pointed and lethargic 'nailed down' diatribe such that Sir Richard evokes from time to time.

Thanks, Nancy. BTW, your ephemera is a big hit on flickr...

Beautifully said, David. Your words = genuine essence. I agree, and would add that the byproducts we send out would mean nothing without the turn of mind behind and in them, which can be difficult or impossible to ascertain in commercial art. But I think you already said this! Over and out.

DVS, chuckling at the description....I guess there's some truth to that...but overall generalizations

are muted by the fact that we all bring something different to the game and you can participate at any level you want to. And like anything the more you put into it...etc. For me the art world of ArtForum and Art in America partakes too much of capitalism, branding and scams to create intrinsic worth where none exists....it is, in a word, unsavory. We do things that give us pleasure, that help us learn new skills, to create beauty out of chaos and chaos out of ...everything...and then we share. There are no notaries to sanctify our participation, no lexicons of obscure jargon we have to master and no grooves we have to stay in to maintain our client base. For me, art is not an object that you create, it's an attitude you cultivate. The things that leave our hands and travel the world are just the byproducts. The Great and Powerful Dave Has Spoken (insert thunderclap here)

I sent Richard a letter last week and asked him: "Did your computer really implode or have you decided to go off the grid and only communicate with people via snail mail?" I am interested to know. I wonder how many mail-artists there are who stay clear of the net entirely. There are certainly many former mail-artists who have gone completely digital. One former mail-artist, a name many would recognize, posted on FB: "Mail-art is the Special Olympics of the art world." So "the times they are a changing" and it's interesting to see where the pieces are falling.

Meant to say too: David, thank you for bringing Richard and me together again, you're a peach. I've missed him. I'll bring the brandy.

Yah, tho Rinpoche is dead and Richard is alive and Here, freaking people out to this day.

Richard is spicy in his philosophical writings, but are individuals targeted? It's mostly a view of the human race or segments of it, and as we all know the h.r. can be far from pretty. I get a lot out of his insightful and irritable writings, even when I start to worry something might mean me, like what you commented below, since I sent him something recently.