September 11, 2012 - Sometime during the MinXus-Lynxus Solar Festival 2012, Theresa Williams sent this lovely mail-art commemorating poets Walt Whitman, H.D. (Hilda Doolittle), and Lorine Niedecker. Theresa is President of the New Arazamas Literary Society. Here is the beautiful reverse side of the “Lives of the Annointed [sic]” card: Lorine Niedecker (1903-1970) might not be as familiar to the discerning as Walt Whitman and H.D. I like her poetry very much and am particularly interested in her involvement with the Objectivists and Objectivism in the 1930s (no relation to Ayn Rand):

Ever thoughtful, Theresa Williams sent this mirthful tribute to the poets in a decorated envelope: Make sure to visit Theresa Williams’ “The Letter Project,” a modern correspondence school: With trembling hands and anticipation, I was pleased to receive a thick envelope last week from new-old friend Ficus strangulensis in Charleston, West Virginia.

Once an industrial chemist with an inquiring mind, Ficus strangulensis found mail-art and Otherstream literature, producing an extraordinary body of work, the bulk of which was released through the Eternal Network in the 1990s. His zine Transmog was a beacon for what I identify in this blog as Otherstream but also has a number of other designations.

Today Ficus strangulensis remains active creatively, contributing, communicating through the network but below the radar. Some might characterize him as reclusive, busy with arcane pursuits and rifle target practice in the secluded wilderness of West Virginia. 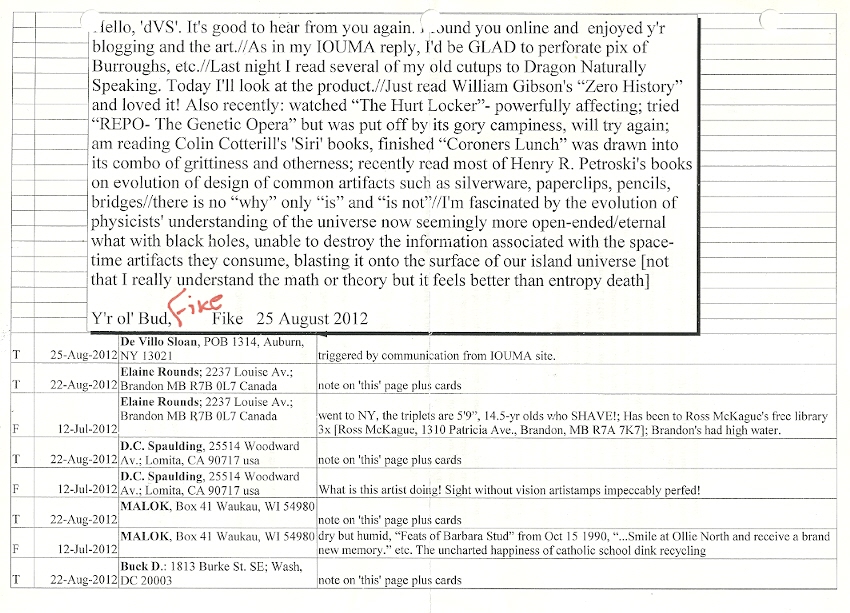 As the beginning of his message indicates, I have proposed a collaboration with Ficus; and he has agreed. (More on this exciting development further down!).

The reference to William S. Burroughs is not random. Ficus – along with his contributions to visual poetry, collage and photography – is recognized by many as being a serious practitioner and working heir to applications of the “cut-up technique” developed by Burroughs, Brion Gysin and Harold Norse. Ficus has refined the method considerably, and he sent me some examples of his poem-objects to add to my growing collection of his work: Bad timing characterizes my correspondence with Ficus over the years.

When I lived in Alabama, I made the acquaintance of Jake Berry in Huntsville, Alabama, a writer, artist and musician of striking originality – a “pure product of America” as William Carlos Williams wrote.

Jake and I developed a crude cultural slash-and-burn programme for the southern portion of the U.S. that came to include Mike Miskowski (Tempe, Arizona) and his MaLLife zine and his Bomb Shelter Propaganda publishing outfit. (Ruth Schowalter in Alabama – gladly abandoning her New Criticism-influenced master’s thesis on Thomas Hardy – came on board with Paper Bird Press and there was a steady correspondence with vispo theorist Bob Grumman in Florida.)

I am convinced I saw work by Ficus for the first time in MaLLife about the time Mike published some work by Dick Higgins, which brought a feeble awareness to my mind (no doubt obvious to everyone else) that the New Wave of visual poetry and correspondence art was actually connected to the older efforts of Fluxus and Ray Johnson that emanated from New York City and I that had (very wrongly assumed) was the work of a bunch of mental patients. I was no stranger to performances by people dripping water into buckets. Ficus offered an avant poetry that was an alternative to the true Red Menace of those times: Langpo.

I saw Transmog and Ficus’s work elsewhere, but the years of his greatest presence in the network were years when I was taking time out. I also missed the David Chirot phenom. Fortunately, there has been ample time to connect and re-connect.

The envelope displays a collab with (Trashpo Jesus) Jim Leftwich, suggesting that what comes around goes around in mail-art: Yesterday a missive was dispatched from Minxus-USA (New York’s Overlook Hotel) to Ficus Strangulensis in West Virginia, USA. This is the first (and possibly final) phase of the MinXus-Lynxus Shooting Gallery Project. Here is an overview:

- MinXus-Lynxus documents all aspects of the project Photo-vispo by Carina Granlund (Petsmo, Finland). This illustrates the image-textual/perforation method that will be used for text editing in the Shooting Gallery Project. MinXus-Lynxus views this also as an experiment in Holism.) Text of William Shakespeare’s “Shall I Compare the to a Summer’s Day?” sonnet (courtesy of Academy of American Poets) 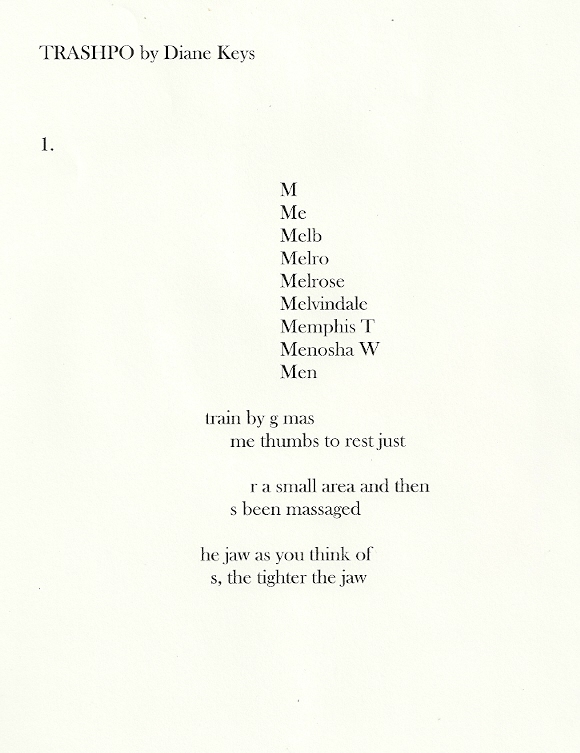 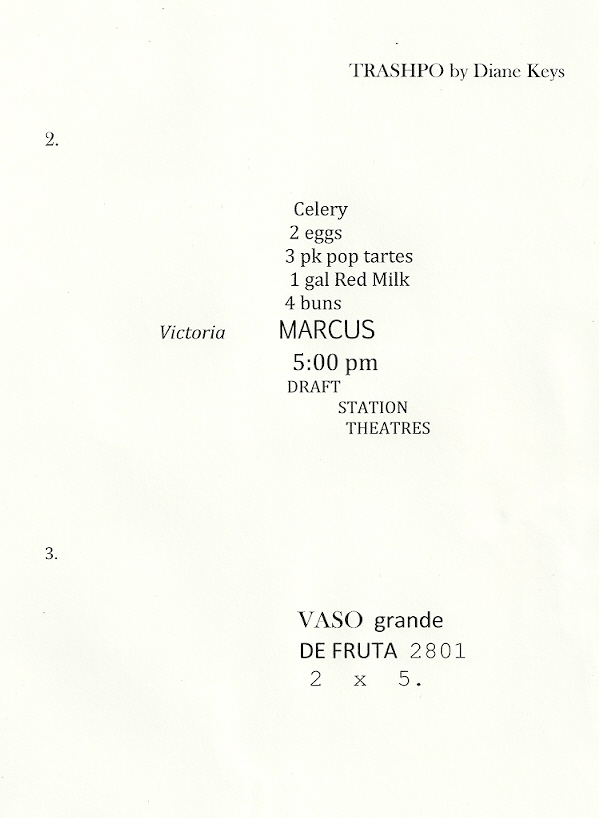 MinXus-Lynxus thanks all participants profusely, especially Ficus strangulensis – the event score has evolved since earlier email conversations about the project. We also look forward to documenting the project further as it unfolds. I was thrilled to receive this work of visual poetry from new correspondent Alexander Limarev of Russia. This is a large piece (approximately 8.5 x 11 inches). While hardly lacking in visual imagery and textures, it is essentially minimal with “GLOOM” being composed of smiles: a very nice touch of irony. He wrote a message on the reverse side: He kindly informs us the work is composed a “laser print, drawing, [and] embroidery.” A very thoughtful piece indeed! Alexander Limarev does not seem to have a blog. Perhaps you would like to send him something. He seems to be especially interested in stamps: Deepest thanks to Alexander! We will send you something in return very soon!

I see you can appreciate that the Cleaver's should live right next to the Mink Ranch.

I used to watch the episodes over and over. Ward Cleaver goes to work every day, but no one seems to have any idea where he goes or what he does. In the meantime, The mother is always cooking. Beaver does some heinous thing like accidentally electrocute a neighbor's cat or something.

At the end of the episode, Ward visits the boys - often in their bedroom - and delivers this moral lecture that puts things into perspective: "Beav - now you can see how dangerous electricity is. Did you see how the dead cat's eyes are popping out of its skull? Mrs. Jones is depressed because you killed her cat, so you are going to mow her lawn for two weeks to show how sorry you are" - stuff like that. Rancher should give speeches like that. Can't answer that, I'm choking because of over-laughter

OK Marie, I'm howling, did you watch this on TV is Alsace with French voice overs?

That show inspired two Urban Legends that many people actually believed: (1) Beaver grew up to become Alice Cooper (2) Beaver was drafted and killed in Vietnam. Both utterly untrue of course.

No wonder Dw identifies with him. And that thing around his eye, holism for sure. 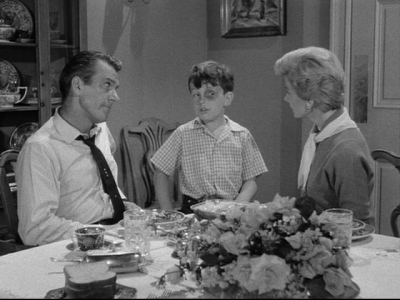 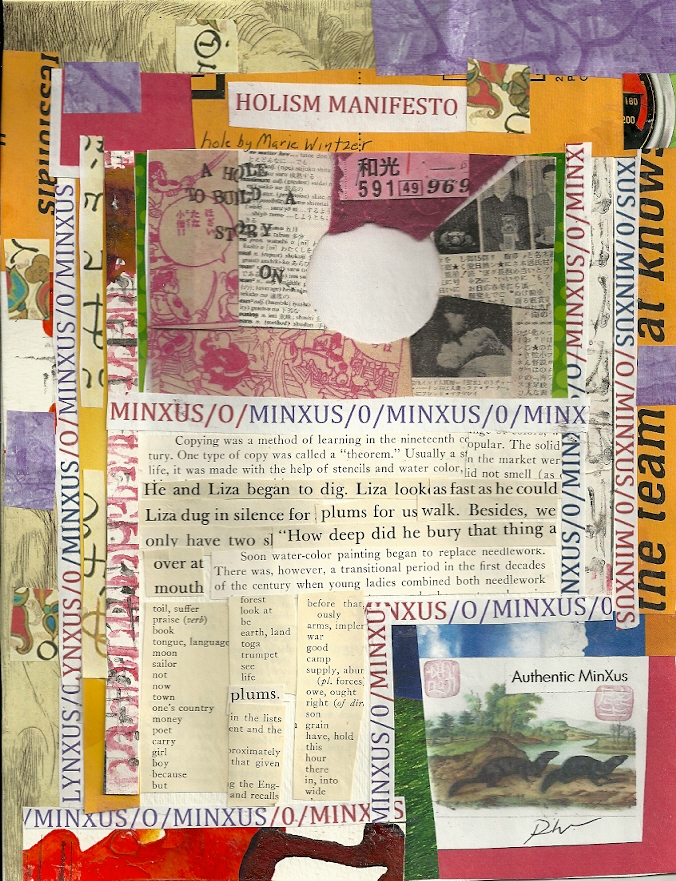 DK - please look at Burroughs' "Mink" further down the stream. It looks strikingly similar, to me anyway, to a lot of your assemblages. I think Burroughs' shows the signs of a whole lot of male aggression & anger but still captures that "D-Khaos" as transcendental vision. Unlike Burroughs, you demolish "popular reality" without ever pulling a trigger.

Theresa, I'm not Tom Clark. Your work is rich in signification & offers abundant possibilities for writing, so I hope we can keep trading. I tried to keep Walt, HD & Lorine off to the side of the rifle range. Shakespeare needs some editing, IMHO.

Diane, thanks for contributing authentic Trashpo to this experiment. I don't know the physics of it, and maybe the paper will just be destroyed.

The intended purpose is textual. I am hoping the bullet holes will remove letters, words and parts of words to create new or (revised texts). I hope Ficus sends the targets back to me. I will transcribe & post the results. I understand a lot can change, but that's the concept.

Marie - the targets are Prairie Dogs (aka Minnesota poodles). Dw guessed it was a woodchuck or hedgehog & was further confused with the "Leave it to Beaver" re-runs.

I don't have a grasp on the mammals of France at all. I know European minks & American minks are different.

Prairie dog sounds reasonable. Someone said it was a hedgehog. That sounds less reasonable. Great blog DVS-I love the ones that have been converted to woodchuck targets--I love the absurd nature of this project. It will be great to see the results. So it will read "So long lives this (bullet hole)gives life to thee" perhaps? I wonder what he will be aiming at.  Thomas Hardy is one of my all time favorite authors-was good to be reminded of him this a.m.