September 25, 2010 - Cheryl Penn is an artist in South Africa who I see as working in that borderland between written text and visual image. For lack of anything better, this area can be called the visual-verbal. This is a limited edition (1/7) mail-artists book. I included what is actually the back cover of her book, because everything she is doing is very much centered in an exploration of language and its possibilities as art in a post-literate world. Here is the actual cover. Cheryl still adheres to linearity and to some degree narrative: She has very kindly documented the mail-art book information:

When I received this, I was very much, "What is this?" in that spirit felt when seeing something that strikes one as being new and different. In a community of friends sharing art, it's inevitable you begin to establish a framework of expectations for experiencing people's work. Take the IUOMA vispo contingent. I have - the full weight of it strikes me sometimes - known John Bennett's art my entire adult life. I've lived and grown with it. It's a similar case with Ficus Strangulensis and Sheila Murphy. It doesn't take a great stretch to appreciate Mehrl Bennett and the innovations of David-Baptiste Chirot and Karen Champlin. In my world, Cheryl brings some variables to the equation that I have to learn more about and want to learn more about. Mail art is a great way to do it, I think. These limited edition mail art books are a tremendous vehicle:

Here is the center of the book, which I think Cheryl utilizes very well this amazing syntax of words and images. Vispo often focuses so much on alphabetic and hieroglyphic shapes as images that we can forget another important aspect of language is its structure in relational patterns such as - in English - phrases, sentences, paragraphs. Cheryl clearly incorporates language structures.

With this first installment of mail art from Cheryl Penn, I am only beginning to appreciate her work. I hope we continue as active IUOMA friends. Here is a message from Cheryl (I hope she doesn't mind) that gives some insight into what she's doing because I know others are receiving her mail-art:

"The symbols come from many language systems - the only criteria I have used is that they are before the formulation of English. I started to choose symbols to represent an alphabet, but that fell back into an English based language, if you know what I mean?? [Yes, I do - DVS] At the moment they hold remnants of their original meanings - for example, the first one is the Egyptian symbol for 'the horizon on the dead,' or the place where the sun sets [William Burroughs - "Place of Dead Roads" -same references extactly - DVS] - but of course even that is up for debate! The cross obviously is a universal symbol of north south east west etc. [Other things too, I think - DVS] The symbols mix cuneiform, Babylonian, Egyptian, Asian, Chinese, Congelese etc etc - in fact they in themselves, by being gathered and situated on one page are a melded universal language [Very cool - DVS]. They have all just been reduced/enlarged to a standard size - a sort of text/font. I suppose I am talking abut a new language scheme rather than a system of meaning. I am not particularly interested in the Language Turn, all the debates surrounding semiotics [Smart - meta-language tends to consume its victims - DVS]. To be quite frank, I am working intuitively at the moment [Way to go!!! - DVS], not really understanding exactly where I am heading [I welcome you to the club - DVS]. Perhaps it will head to visual poetry that is not is a known language??? [Kinda up to you -DVS]." Here is scan-gone-wrong that works as a nice detail piece of Cheryl Penn's work: 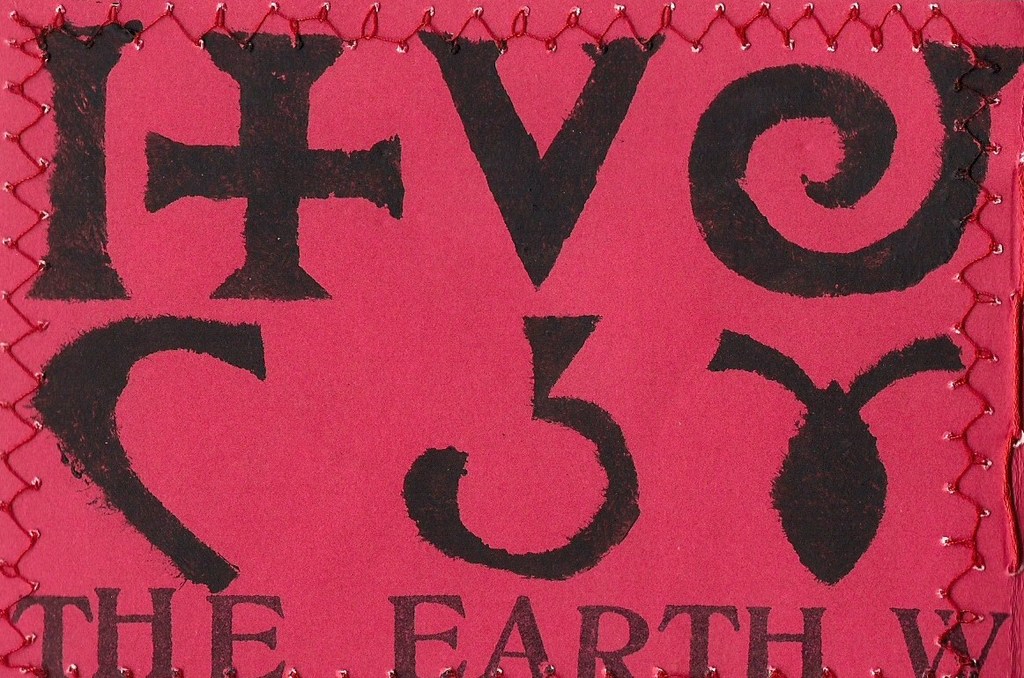 Cheryl's work made me think about how this whole visual-verbal thing got started - sometimes returning to the scene of the crime can give you some clarity on all that transpired. In Euro-American kultur, in The Great Tradition (snicker, snicker), I think the interest in creating visual-verbal work - on the poetic side of things, not visual arts - comes from Ezra Pound (also nobody's fool). I'm sure you can find dozens of examples doing it before Pound, but he brought it to people's attention and put it into play as, Tom Clark might say, as an Ace of Diamonds in the bluff and scam game of strip poesy. Right now, it might be the only game in town with a future: This page is from Ezra Pound's "The Cantos," which were written over decades. This is a relatively late one. Pound began embedding ideograms in certain Cantos, and it generated all kinds of discussion for decades. What is also interesting on this page is that the words drift away from being left-justified and start to make a shape on the page. You would not believe the discussion that some small thing like this has generated, but there is simply no justification in a strict poetic sense why he should have done this. Traditionalists were and still are very, very concerned about what we might consider minor disturbances in the force like this. You can see in Pound THE POEM IS BECOMING VISUAL, A GLYPH unto itself. Before The Cantos, Pound founded Imagism, which was preoccupied with visual aspects of poetry. What we are seeing today was in the literary cards at the beginning of the 20th century, but fiercely resisted in many quarters. From a U.S. perspective: It found its way to Black Mountain College via Olson and others, it found its way to Dick Higgins and Something Else Press. It found its way right here to many of the U.S. vispoets at IUOMA. It came from high modernism as well as Da Da, constructivism, all the isms you can spew. And don't you love this Pound stuff - what an insane joker, only there was this little problem... - he's babbling about US Presidents from the Adams family, somehow jumps to Stalin - just collage really. Anyway, Cheryl, enough from me.

I hope you respond. And thank you!

Comment by cheryl penn on September 25, 2010 at 5:19pm
Dearest DVS - as I have said in previous correspondence - as a member of IUOMA - "the waiting is killing" - but your response has re-quickened me.

I said in communication between ourselves that - if genetically we are the sum total of our ancestors, we should respond viscerally to universal symbols - take a random symbol - a tree - in the many diverse visual representations it appears. It is regarded in the contexts of the tree of life/lives, or the universe tree (For ease of reference I am using Adelaide Hall's compact book Important Symbols). As a symbol it was used by the Egyptians, Assyrians, Chaldeans, Scandinavians, Phoenicians etc etc. Unlike the word 'tree', the visual glyph brings consciousness to bear rather than the spoken language. 'Glyph' comes from the Greek GLUPHE which I am told means 'carving'. I think these universal symbols are carved into our consciousness. I am no new-ager, but the use of similar symbols the world over, through various ages means there must be some sort of intrinsic human unspoken language??? As you have said, Pound (I dont know much about this at all - I am off to research after this) started to make words take their own shape - a glyph shape - what was he 'accessing' in order to achieve this? And why a poem? I am still mulling about content. I have had to THINK about my work alot since 'meeting' you - I have noticed, no standard margins - unless dictated by the computer... This spilling out into the previously virgin margins and gutters may be a denial of standard language presentation? In the book arts this is discussed at length by Betty Bright, Joanne Drucker etc etc. What is the blank page but a world of possibilities? What is the gutter but someplace you dont want to be... Marginalized - well, enough said.

I find your term 'post-literate' VERY interesting. I am THINKING about what you have written, so this is just a short response - mostly to say thank you and thank YOU.

Comment by Bifidus Jones on September 25, 2010 at 4:18pm
I like the idea of the Crimson Giant being the observer of Babel. In the context of mail art, who is the crimson giant? The sender, or the receiver? At any rate, I'm looking forward to receiving more sections of the book. As one of the seven, I'd like to get others' copies of their sections to add to my copy of the book. My address is: