The Actors’ Museum in Miskolc, a one of kind institute of its region which also won the title of most popular museum in Miskolc last year, is celebrating its 20th anniversary in 2016. The Actors’ Museum connects two centuries’ worth of theatrical productions in the form of a spectacular exhibition where the focus is on the playful and joyous nature of theatre, similarly how a colourful revue connects two consecutive productions together. The Biennial celebrates this unique collection located within Hungary’s first stone theatre in a similarly whimsical manner.

Revue: “A loosely connected, entertaining music and dance show in which female dancers, ‘the girls’, play the major part.” “A series of spectacular musical, dance and acrobatic numbers.” “An entertaining musical dance show that serves to tie consecutive performances together. During a revue, dancers change between performances. One of the performances includes a magician show.” “An ornately presented comedy substitute which consists of song and dance pieces and short, mostly comic scenes, sometimes performed as a loose tale. Its rich scenic nature and the quality of its dance performances were a major influence on operettas (revue operetta).” “Entertaining, picturesque magazine.” “Shares major essays on societal or literary themes, review.” “Military review. The marching and inspection of troops in the presence of a high-ranking officer or general during drills, equipment check, or at a parade march.”

Only pieces sent by mail that were specifically made for this occasion can be entered to the exhibition. We consider any bare two or three dimensional items or works of art wrapped in envelopes or any other kind of packaging that were sent via mail as mail art. We will display any piece that relates to the theme of the revue regardless of its shape, size, material and techniques used. Any number of works can be submitted. We recommend artists to utilise as many mail items and services for decorative purposes as possible (stamps, priority and registered letter markings, etc.), as they are integral visual elements. Artists must include their mail and e-mail addresses on the package. The exhibition will be documented via photographs and published by SpanishFlu (www.spanyolnatha.hu). The submitted pieces will become a part of the Marcelland International Art Collection. The SpanishFlu Mail Art Awards of Excellence will be awarded at the Biennial: those awarded can host their own exhibition in the webjournal. The International Mail Art Artist Colony of Hernádkak provides accommodation, catering, tool and material support for the artists. 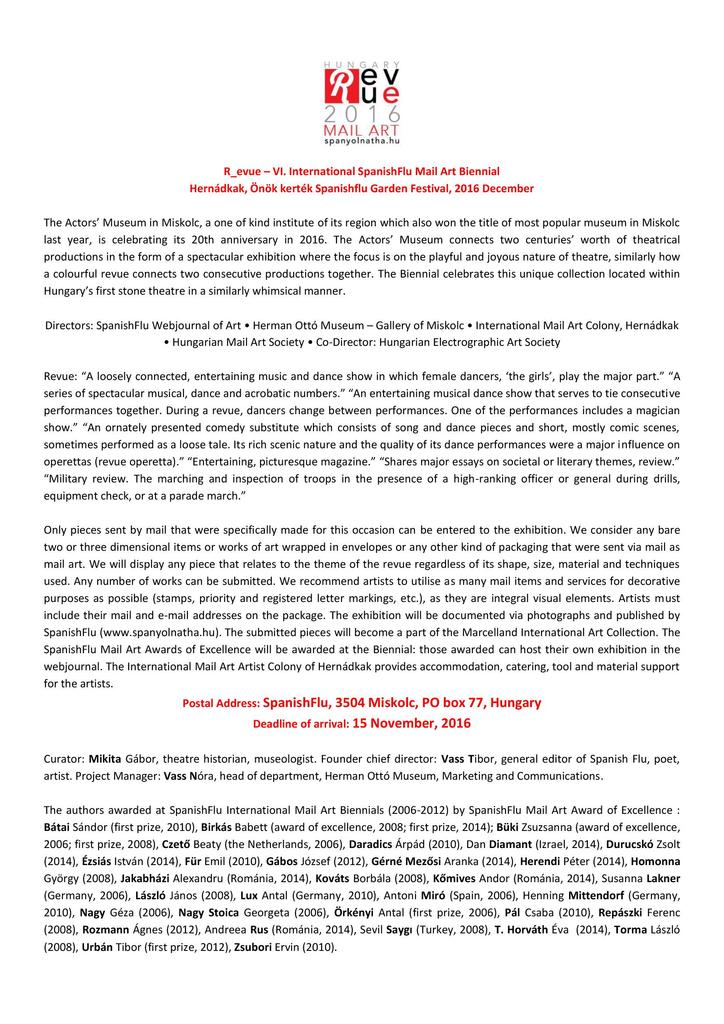