Mink of the Tangerine Oncoming by De Villo Sloan. How delightfully scrambled shades of red can warble  when mixed with a kind of pulp-fiction old movie poster and garrulous words. Free Verse in action. 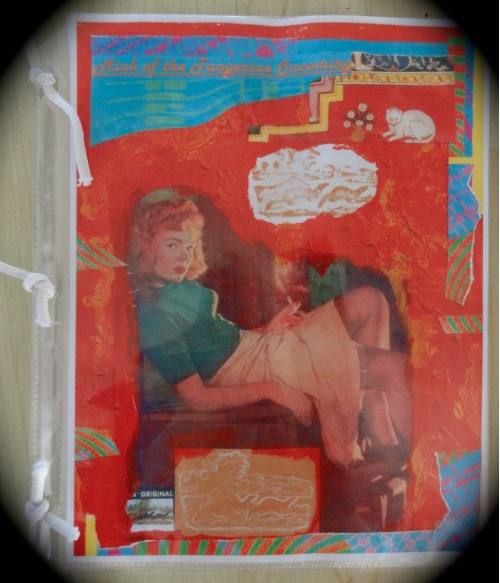 Somehow, I’m going with Christopher Smart and a turn at Mr Potters asylum and a change from curable to incurable.  I know I may be talking in code, but this is what this work appears to be to me, “As I recline upon an ornate throne of adobe”. 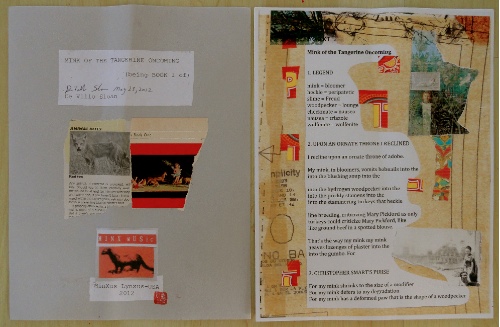 Smart was all alone, except for the company of his cat Jeoffrey. (Left hand page, top right image). This part is pure speculation - while in the asylum for the mentally insane, Smart was visited by a tribe of originals who taught him all he would need to know if ever his plane crashed and he landed in the middle of a south American jungle. Including tips on how to become a midwife known as Mrs Mary Midnight.  That’s what happens when your father-in-law thinks you’re mad. Jeepers life can suck as Jack Smart. 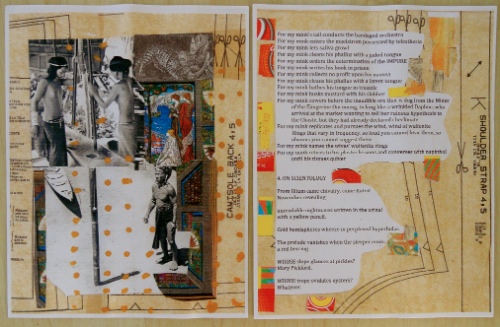 “For my mink writes his book in prison”.

For Ninthly he looks up for his instructions.

For Tenthly he goes in quest of food”

"For my mink’s tail conducts the bandaged orchestra

For my mink enters the maelstrom possessed by telesthesia

For my mink lets saliva growl",

Words which create the bizarre,  evoking dream images – anaphora which emotionally culminate in

“The prelude vanishes when the sleeper emits a red herring". 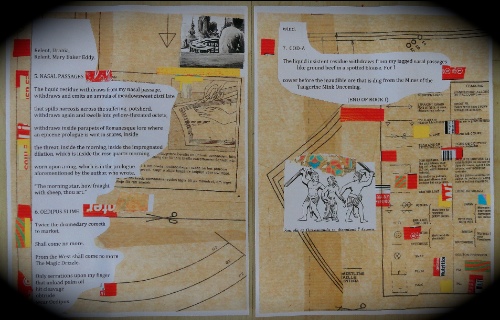 Thank you De Villo for this (being Book 1 of) - as you said somewhere - publishing ones own books is the way to go - although its bigger than the rest (and why on earth not!) - for certain its entering the library - EVERYONE needs a Tangerine Oncoming after all :-). Remember when we were young (????) and we had those books that everyone wrote messages in and little sayings and/or drew pictures in  at the end of the school year? Or maybe it was just a girl thing, but ANYWAY!! Cuan has taken one of those and made it into a PINK book. This made him very surprised. But you know, books can be VERY dictatorial!

Especially when you fill them with girls and kissing and the odd Venus de Milo. And in the end? You KNOW the shoes are for dancing, not for running away.

But you know this is a guy's book because - I quote: (from the book)

"Theres a bluebird in my heart

that wants to get out

but I'm too tough for him,

I say, stay in there,

I'm not going to let anybody see you" (Charles Bukowski) - he of  "I have one of two choices – stay in the post office and go crazy ... or stay out here and play at writer and starve. I have decided to starve" fame. Pink with a touch of blood.

Cuan - thank you VERY much for your addition. You're not a bulls supporter? I don't know anyone who is :-)))!

MAN! They go well together.

I suppose they had to make the best of it. I don't think in most cases there is a choice involved in that the organisms had flaws.

You don't want to "romanticize" any more than "postmodernize." Poverty, illness and failure aren't something to aspire to. Yet who knows that some people standing back don't see the alternative as worse. I don't know.

I was thinking about the similarities between Van Gogh and Christopher Smart and Charles Bukowski saying “Some people never go crazy. What truly horrible lives they must lead.”

In addition to his truly remarkable poetry, John Clare is the tale of a rustic lad who became briefly the toast of London society & then an uneven remainder of farmer, lunatic & poet. Smart was a wit in the British periodicals. Was Grub Street the realm of hack writers? Or is that another era? His incarceration is questionable as to who confined him & why. "Jeoffrey" appears the work of an instable mind but anticipates much in form & content that would emerge in the next 2 centuries.

I'd rather just talk about these great works :-))! We could always start a group for Pink Mink Romantic Discontents. I had forgotten how young Smart was when he died - he seems to have gone through a lot in such a short time. Everyone needs a Joeffrey. Dvs - I'll take a Tangerine Oncoming any time - sounds better than a G & T :-))X

Ok, this blog will take a few more looks and readings, but after the first one a big bravo to the tangerine and pink bloggees and blogger. Any book that inspires such tales certainly MUST live forever in the New Alexandrian Library.

And if we are to pause fleetingly on British Romanticism & its Discontents (what is Bukowski but a very discontented Romantic?), Tom Clark out in Oakland has done a great series on John Clare (like Kit Smart they finally locked him up) & DH Lawrence AND one of the mink's natural predators: THE FOX

Thanks Cheryl, glad to know that after the obliteration everywhere else, the greatest products of civilization will endure in your Alexandrian Library.

Hoorah for the Kit Smart revival, however fleeting.

The Tangerine Oncoming is rather loud before coffee.