Letters to the Future

In the rush of everyday's tasks I usually am behind with things that really matter (Mail Art!). Too late to reply to received mail art, and many times wishing belated birthdays. 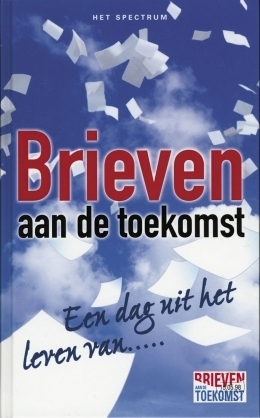 More than a week ago I received a mysterious Envelope. Containing three envelopes, with the warning message that I should open them on certain days. Here you can see, in the back, a part of the main envelope and stamps, and in front one of the two cards which were hidden in the 'To be opened on 20th April' envelope.
Yummy, Raspberries! I happened to have got a few raspberries this morning for breakfast (not usual for Easter, here, but I found them in the supermarket yesterday and they happened to be affordable this time). And the other card.... One out of the serie which caused Eva and me to meet (and which was the start of a postal continuation which is very dear to me): a Smurfpostcard! Thank you very much, Eva!
Looking forward to knowing what's  inside the other envelopes, but these cards already made my day, so I think there's nothing else to wish for, I am happy!

Ah, 'tis a rare card, Heleen, as you can see, 99% of my Valentine mail art cards were RED and pink and a bit of orange, perhaps a green too,...but you are one of the exceptions : turquoise! It means the "Color of the Turks", of course, and as in Greek we spell Turkey : Τουρκία, i usually misspell tourquoise :-) but you understand.  "Firuse" is the name of the stone and the color in Turkey. 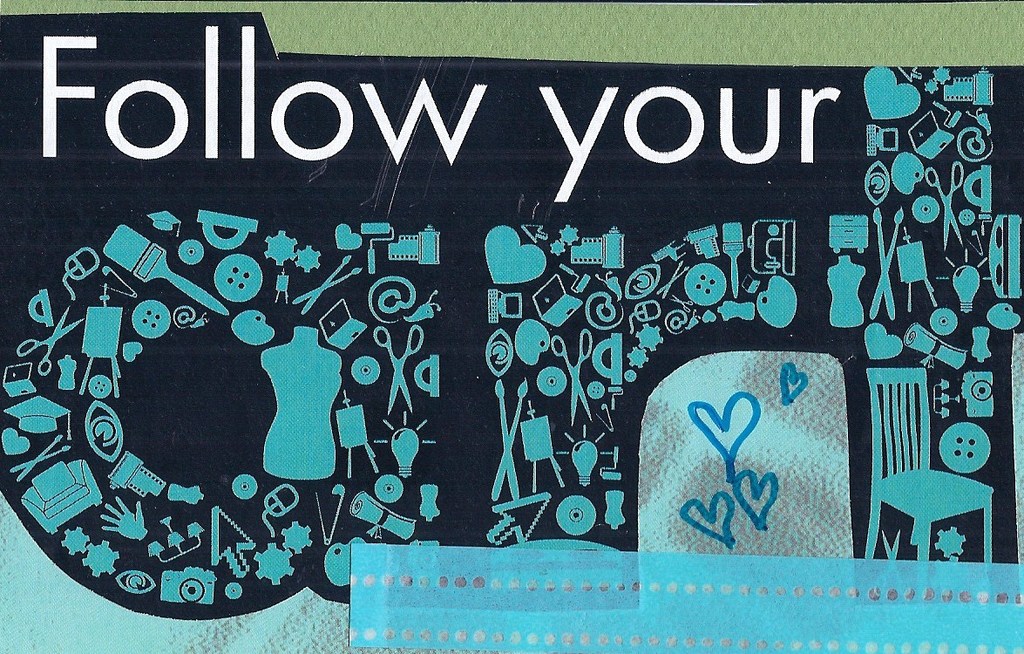 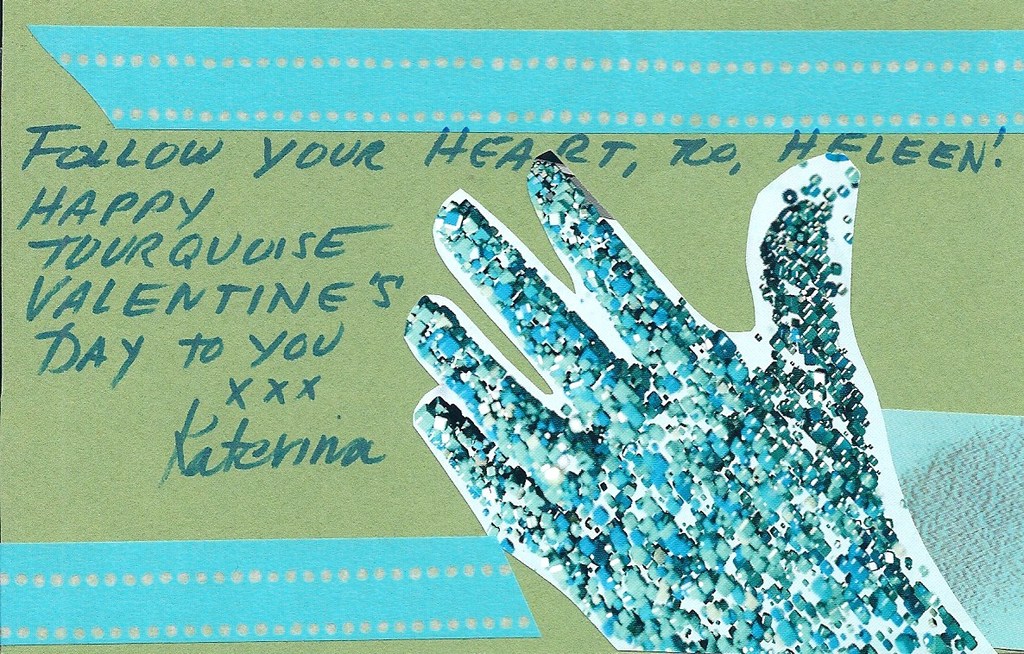 Hurray! A new letter to open in Future!

This time 14 FEB, which will be Valentine's Day. Thank you very much, Katerina (and yes, I really will wait two more days before opening your warmhearted Letter!).

Yes, I really waited!* And scanned and blogged it in the Birthday Mania Group on 2 November.

(Halloween we don't know in the Netherlands, although due to globalism and commercialization it arrives little by little in our country, starting by indoctrination via children's programms on tv, so when I'll be old (and wise, still a few years left to that :-) it will be a regular celebration here, too, I suppose).
Beautiful painting of the great master Vermeer, and beautiful additions of this beautiful colour by you, thank you Katerina!

* and sometimes I am waiting far too long.. Was it a Parcel to the Future or is it a Parcel from the Past? :-)
I received a parcel from the Embassador of Utopia, from France, EXACTLY TWO YEARS AGO - on 11 February 2012.  Which was a reply to, a recycling of, the parcel I had send to him in December 2011.
I put it in my living room as an art object (although visitors don't understand/know/see/notice that), and I enjoy this painted cardboard box with all its postal and customs additions!..
But.. so far I still didn't open it!... I am happy with thinking of the surprise of what would be in it (~I really don't know!). And a second reason is: I want to make a video from the Opening of the Parcel, but have no proper equipment to both film and open at the same time :-)  So an unopened parcel for two years... 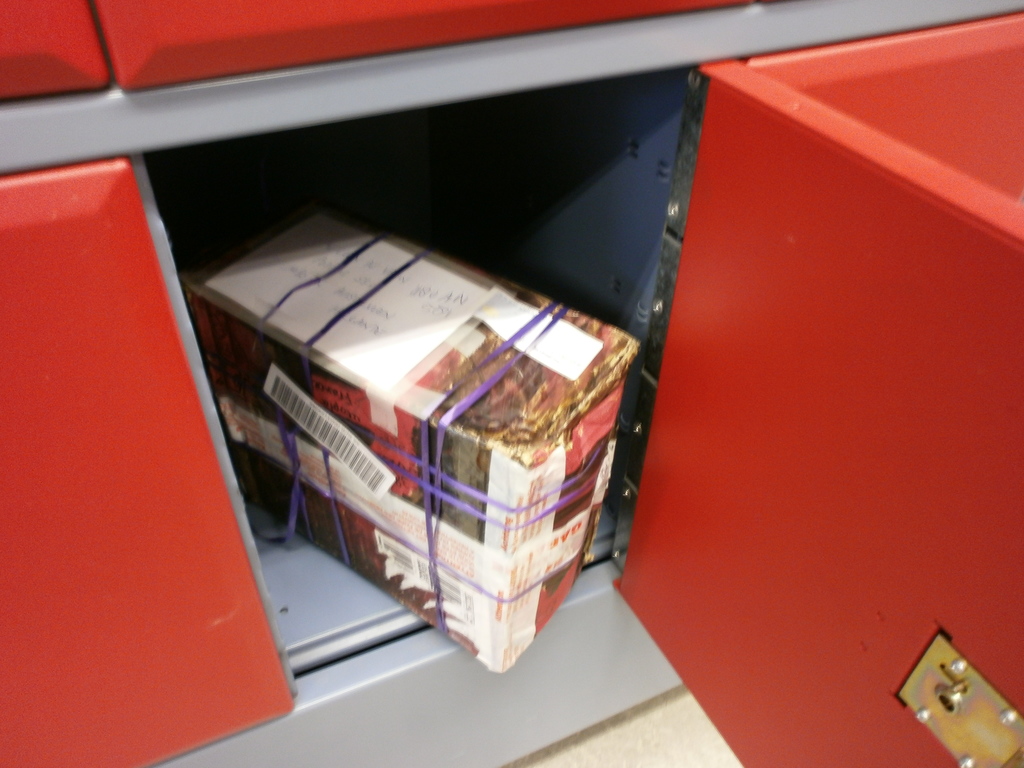 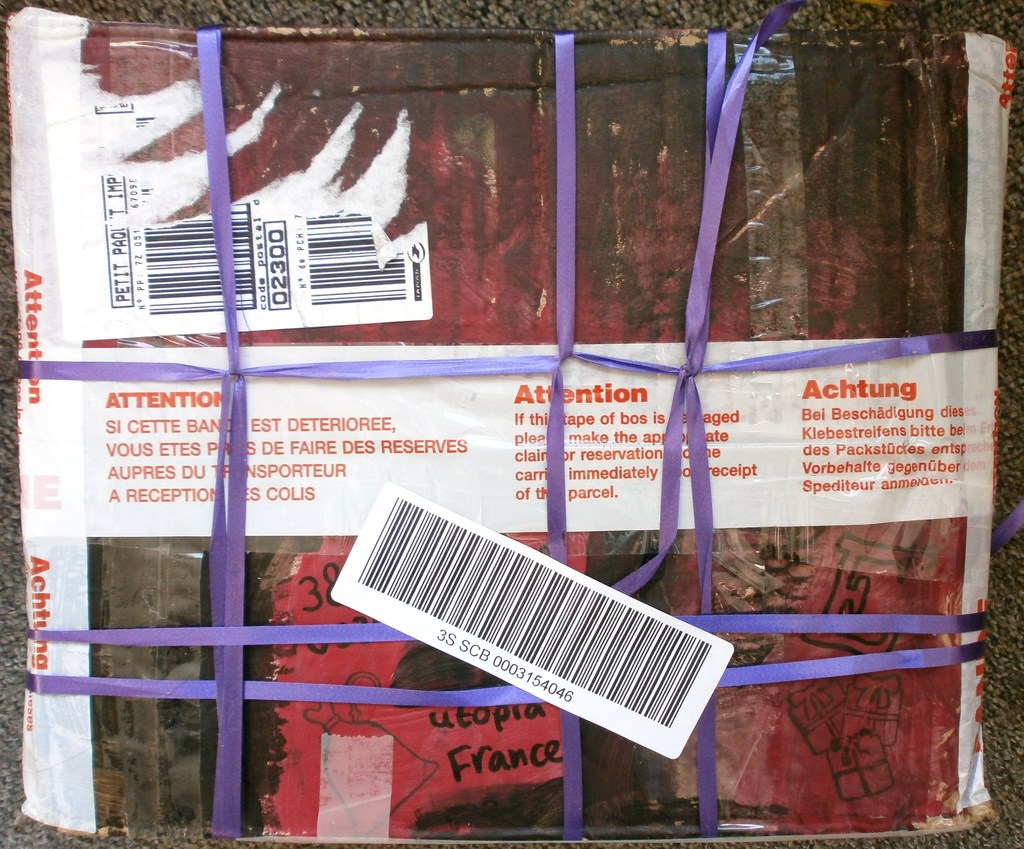 And them time flies.. Mon sincère excuse to the Embassador for waiting so long...

But on the other hand this mysterious parcel is under my attention all these (two) years!... 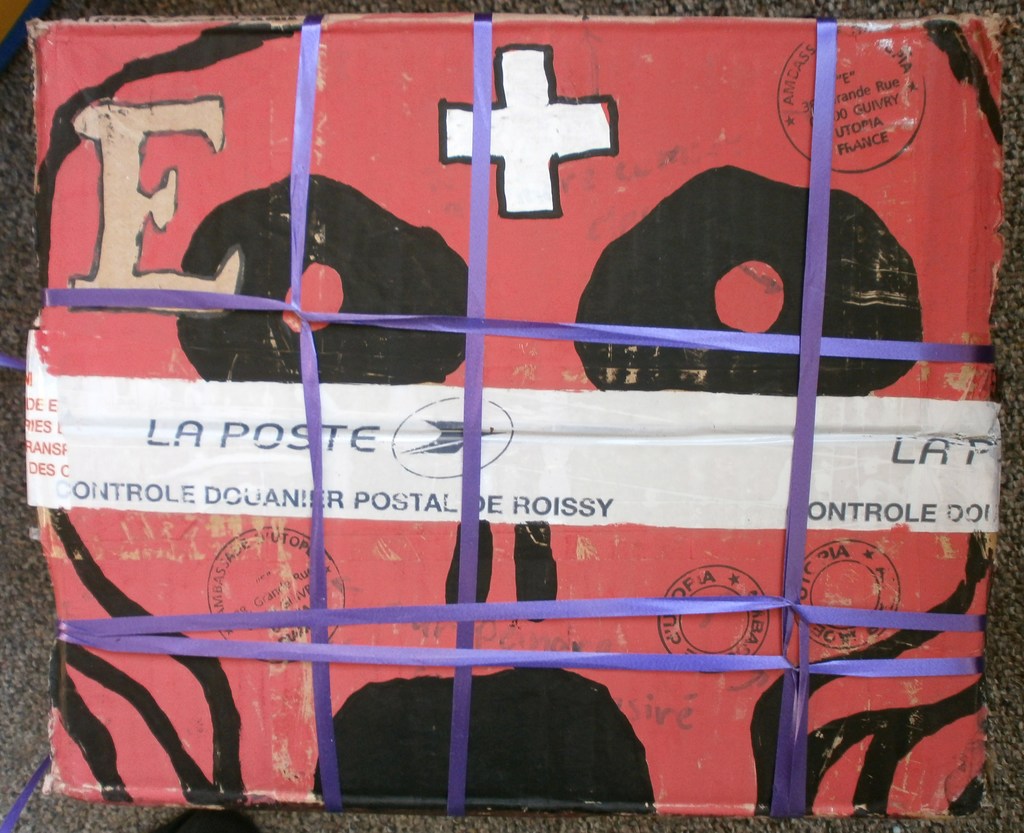 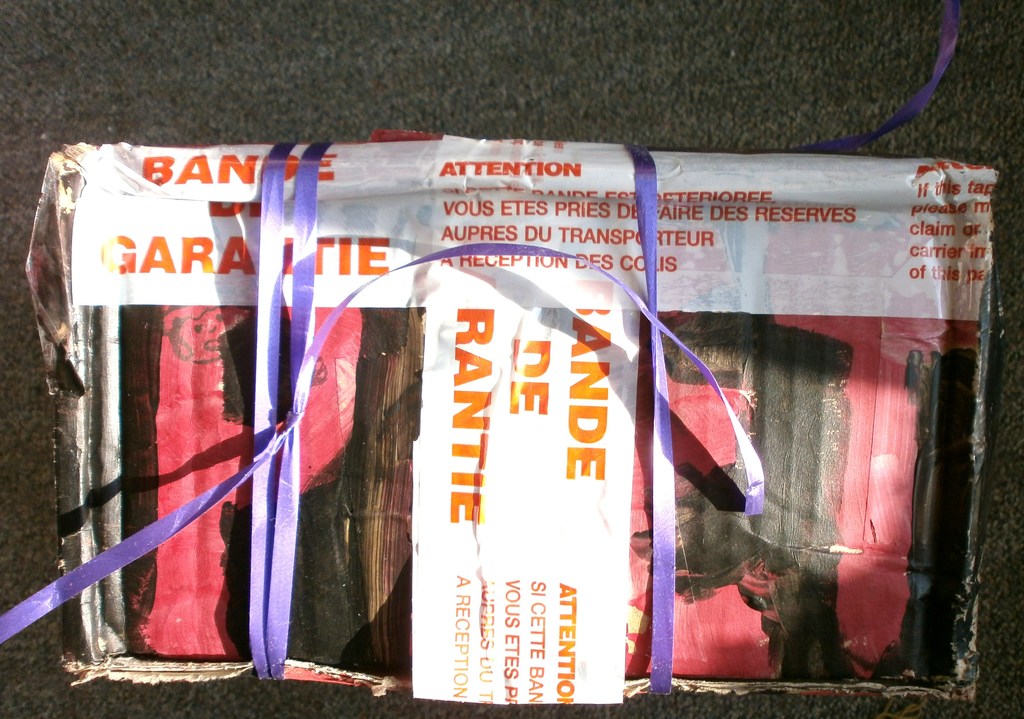 Wow! I missed that you blogged this, Heleen!

You really waited until October 31 to open it then?

(October 31 is Halloween in the USA) 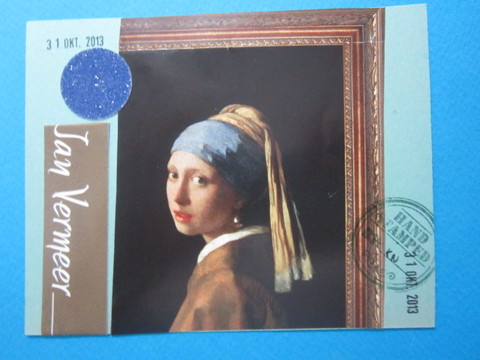 As you discovered, it is also the birthdate of dear Vermeer,

so it was created for the artists series IUOMA Birthday Mania year 2013. 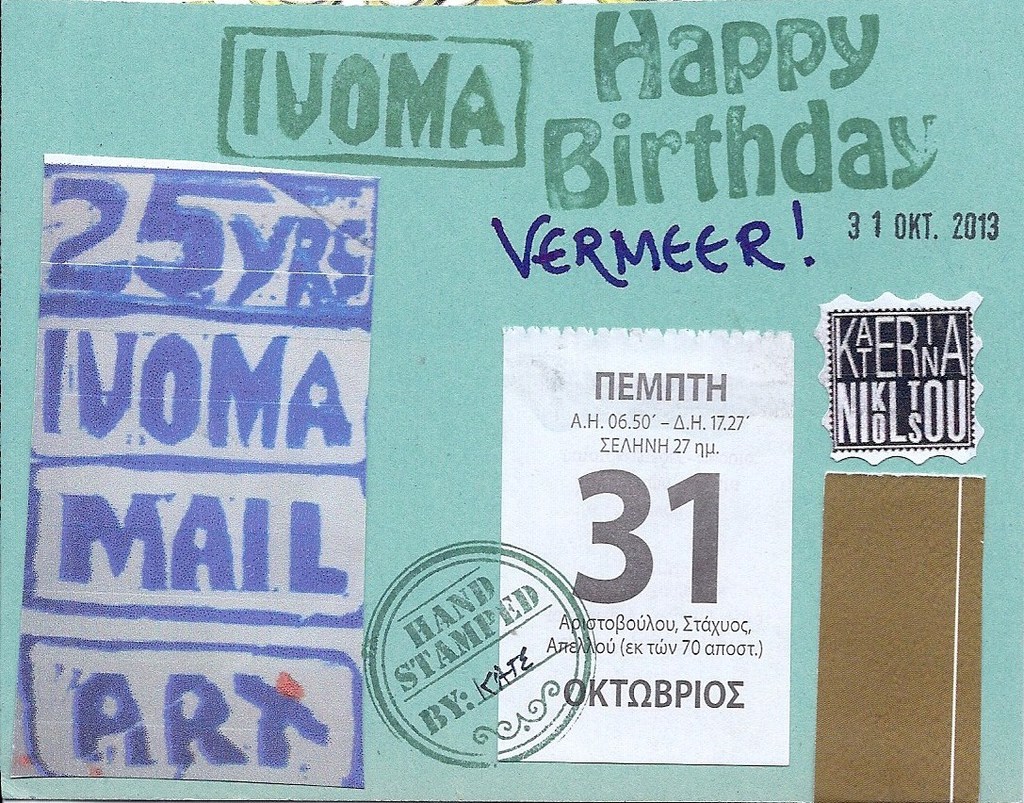 Suus, I had promised to 'keep you on the height' about this mysterious letter.

It turned out to be a Birthday Mailing; on 31st October our own Dutch painter Johannes Vermeer was born in the city of Delft! (Well, 381 year ago, but still his Birthday.)
I posted it in the Birthday group, but in case you had missed it, see above :-)

Suus wrote: Mysterious. Please 'keep us on the heights'.

The reason to start this blog post, was a peculiar one.

I don't know how Katerina managed to do so, but I think her art-to-send-mail-art great :-)

The IUOMA 25th birthday already has been, in August.
And other things related to this day I cannot ponder on (except that 31-10-2013 would have been the 42st birthday of my dear sister-in-law's only brother, he deceased three years ago, suddenly by a cardiac arrest).
31st of October... What else would be on that day?

My fingers itch to get started and see what's inside this envelope. But Katerina asked me very kind to please wait to open it, so I'll do so, and consider her envelope-with-content as a letter to the future :-) To be continued...  Eυχαριστώ, Κατερίνα!