Bifidus sent me the second piece of mail art I had ever received from an IUOMA member  -  again without me asking.  It was contribution to The World is a Town – in fact it’s the image which begins my photo album of that project – which is STILL ON THE GO!!! Does the World have a Backbone? That’s what I called it – Bifidus never disagreed – or – come to think of it agreed :-) - and on Monday I received Methuselah’s Mixture.  Is Bifidus asking why we grow old? I never know – once I saw backwards writing that I could read in the mirror  on one of his postcards – he said I was basically mad and seeing things - so now I just enjoy and keep my runaway thoughts to myself.  Bifidus I STILL have not forgotten that NO-ONE cracked the code to the Crimson Giant and The Tower of Babel??? Thank you Haptic Boss. De Villo I ‘met’ soon too – his buttons and  found materials arrived on Tuesday.  This is his very  curiously interesting contribution for the Asemics 16 project.  Asemiotics.  DVS -  newmade vocabulary – all the po’s you invented and the blue shirt that disappeared – did you steal the buttons from there?? I am VERY curious about peoples choice in trashpo – its actually quite revealing! Thanks for all the collaborative things we’ve managed DVS – and MOSTLY we’ve managed to keep our sense of humour!

From LMF - Another Tuesday arrival - many thanks for the YEARS we have been sending each other mail - for all the projects you've contributed too, for enabling the SA MAil ARt School and for contributing HEAVILY to my diary books - they're a big part of my exhibition motivation - how can the committee say no to this!!!???? Angi Cope I met very soon too – and I have learnt over my time at IUOMA that Heart DEFINITELY Matters to Angi. She is a constant on IUOMA – Snooky too of course! Angi sent me TWO Heart Matters. The first questions Heart Matters as related to being homesick.  This one made me sad for some reason. The second – pink and blue for girls and boys – mapping the territory of the heart. Inside is a ATC of the Letter Guy and she sent a warm embrace in glittery ribbon – A FAB Angie – thank you :-) XX Karen Champlin was also DEFINITLEY one of my first round of friends and yesterday – another FAB arrived. KC has an inimitable style, recognizable STRAIGHT away.  It is SO GREAT that your work made it to my September party – I mean, how serendipitous is that?? Many many thanks for your work – SO great to see you in the mail again. 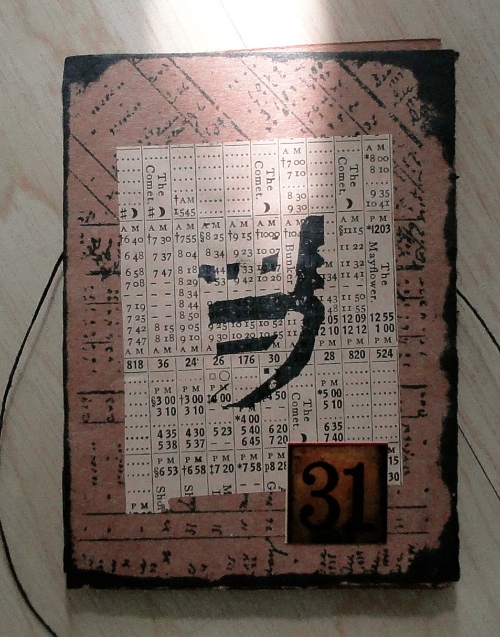 We are all aware of whats involved once you're taken up with this mistress... Marie has become a fast friend and she sent ANOTHER World is a Town Contribution arrived today - this is HOT OFF THE PRESS!!!   It’s a COMPLEX CRITTER! It came in its own box 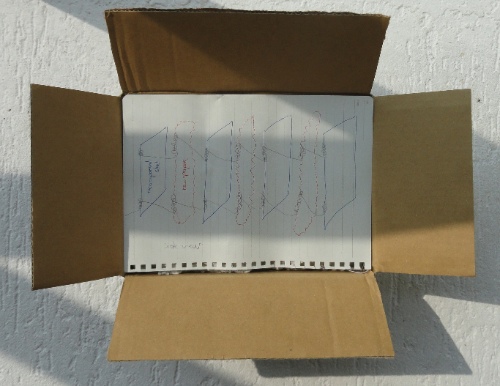 – with instructions – you’ll see why – and Sweet Pea – place some pics here please – I know your photographs will be enviable! It's a conceptual representation of the physical-ness of a palimpsest, where the text is raised, not lying FLAT on the surface.

Today – ZALOPA arrived – Ruud said it was a small variation of ZALOP – maybe a verb? Yes, but I’m a busy entomologist (?) with a full platter right now – so I must take time to do this justice – Many thanks Ruud for your constant support,  calm interaction and making this a wonderful platform for all us madly swopping artists. 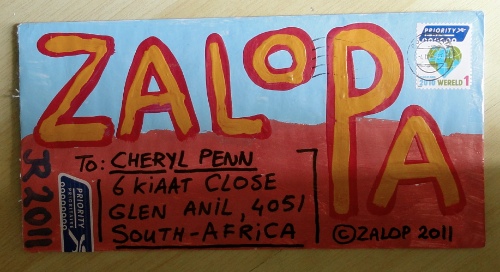 Erni – I had to squeeze him in here, even though I have not got mail this week – he was also a firm new friend – I don’t know if you can see the glitter? Do you remember those images of trees in the snow you sent Erni? They are imprinted in my memory. Comment by Jen Staggs on September 29, 2011 at 9:04pm
Awww!  Cheryl!  That is really a great retrospective!  I am honored to be the first too.  Thank YOU for always keeping me inspired and evolving.

Comment by Bifidus Jones on September 29, 2011 at 6:48pm
Cheryl, I'm sitting here at the Wilde Roast, a coffee shop on the mighty and i do mean mighty Mississippi River, reading this blog and you got me bawling into my latte. In a world of eggshells and barbed wire, you are pure whipped cream. I love you. I LOVE YOU.

Comment by cheryl penn on September 29, 2011 at 5:12pm
Hello :-))) - this was NOT supposed to be about me - its about all the FABULOUS (YES - I used the WHOLE WORD!) artists and people I have met during this year. LMF - I knew you before!  LSB - yes - I remember - as I remember too your sons play you sent for the World Town Call, and your Heart Matters - I still cant get over that - and neither can anyone else I show it to!! DVS - what can I say - A HUG!!! NBS - your name letters just miss NBF!!  It was just WIERD how everyone's work arrived this week - and before we kiss September goodbye 'they' all told me I HAD to say something!!! :-) X - I'm CHUFFED!!!

Comment by Nancy Bell Scott on September 29, 2011 at 4:36pm
A perfect rolling exhibition of fantastic works to honor your first year, Cheryl. What a joyful thing--thanks for letting us all be a part of it today. Congratulations!

Comment by Lesley Magwood Fraser on September 29, 2011 at 4:09pm
Aw I feel like crying Cheryl! IUOMA is a very special place and I don't know what I did before I joined, almost a year ago too. X