A blog for Valentine M Herman The Cheryl Penny Red - A REAL ONE!!!

You all know what Val's envelopes look like - right? Most of us at one or another time have had the pleasure of receiving his square missives - to be opened or not. BUT!!!! I dont think any ONE of them has had a package like this.  Except mine. A REAL Penny Red. NOT a Cheryl Penny Red as Val fondly addresses my envelopes :-)  Ok, so I was having a haffy about not having received ANY Project 26 contributions.  But now, I'm smiling, I have a Penny Red. A real one :-) I think its the oldest thing I have. 1858. Val, I'm overwhelmed. I DONT quite know what to say... but thank you. You know, maybe it was just because of the moan below I had :-)

Val, when you said you were sending me the story of the Penny Red - I thought you meant the REAL ONE! 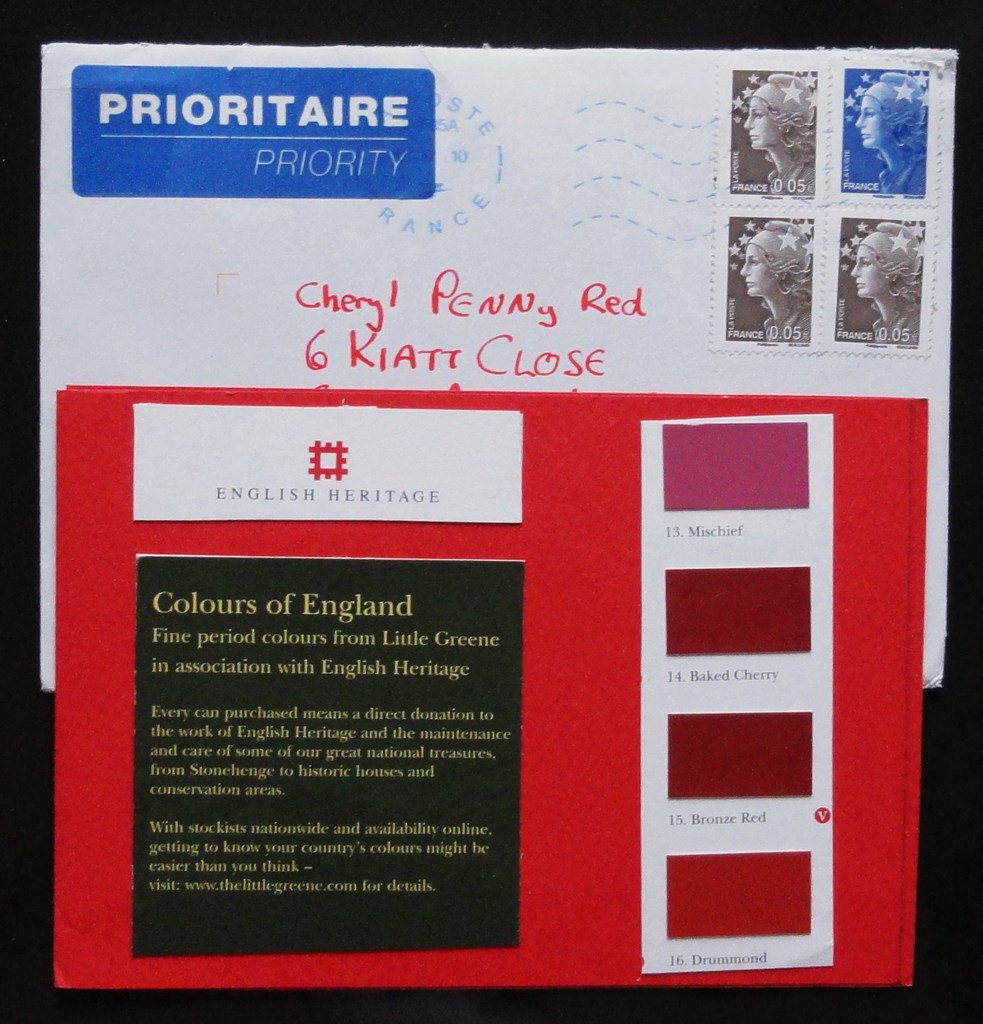 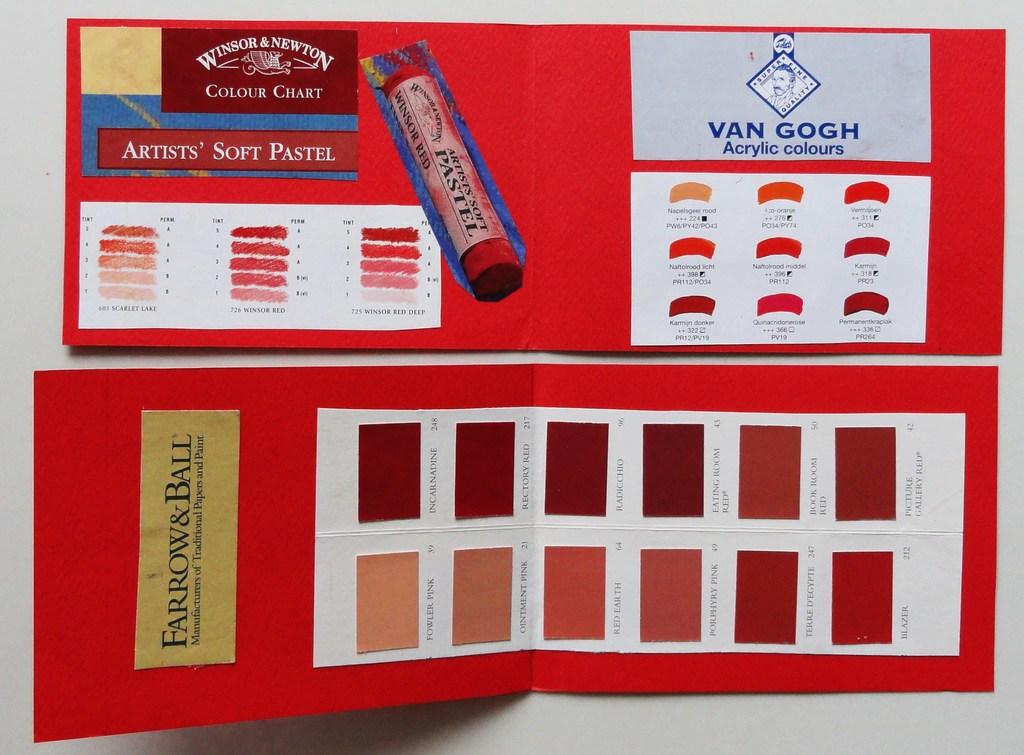 Incarnadine, Rectory Red (WWHHAAAT??) Radicchio, Book Room Red - NO!! Definitely not that color - my book room is Alazarin Crimson - I'm RELIEVED to see that color made the charts - maybe not the rock charts you lot are going on about (yes I'm following :-), but that red is chartered none the less. Eating Room Red, porphyry pink, ointment pink  - do they PAY someone to make up these names do you think? Val has made ANOTHER Red Party contribution - this one written on the plane as he flew from France to England, back to the darkness of Darlington. A Dark Darling? Odd.

Some thoughts on Red: The back of Val's envelope reads "Memories are great - but wouldn't you like to leave a little more? More what?" I'll tell you what - a little more focus - but I've photographed this four times now and your words REFUSE to behave. Yes, I'll be using this in my Red Book Val - thank you!

Valentine gets the gold star people! He's the first to arrive from IUOMA at my Red Party. He invited 43 Queen Elizabeths. They said no on account of her busy diary but Val came - thanks Val! I am the very lucky recipient of " Val's First, Not Very Good and Probably Last Book (sic) For Cheryl" - I hope its not the last - you are supposed to be hooked after your first book Val!! 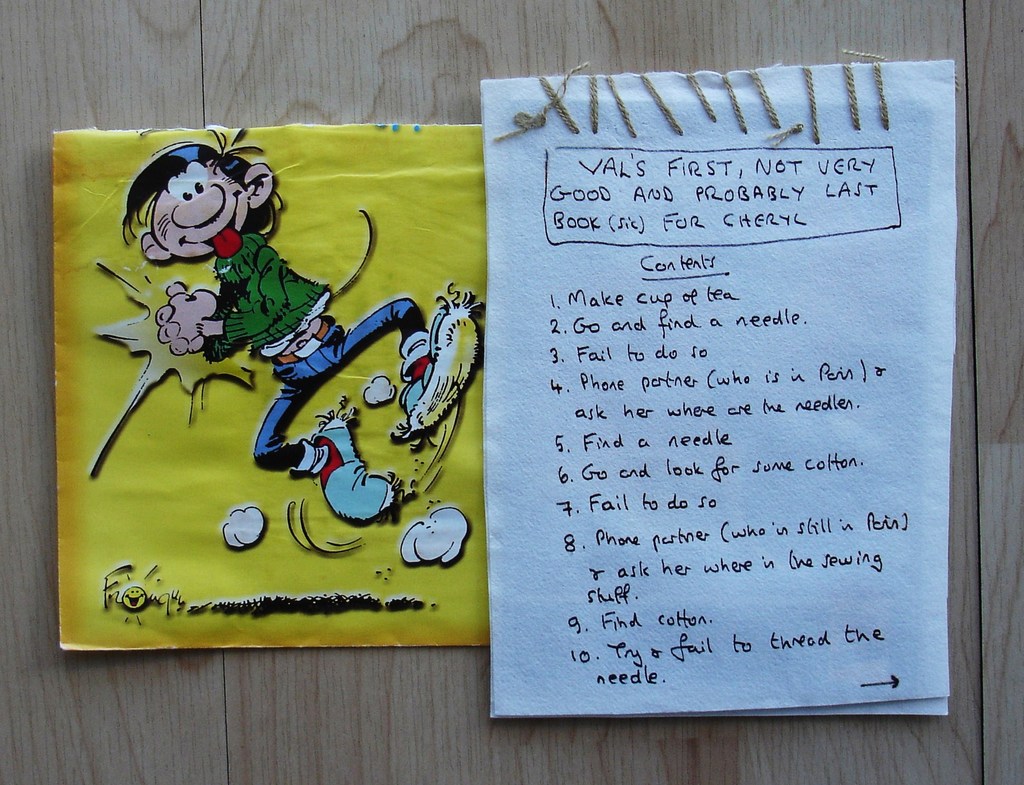 My sympathy Val - I remember what all this feels like - hint - get your own Tool Box with a DO NOT TOUCH STICKER! You'll be RARING to go!! This woman looks like I feel!

I am NOT going to comment on this slightly... page!! "Woman Should Sew And Not Drive Tractors Inc". Confess I would rather sew.

Now this one - NO WAY!!! "Men should Go to The Bar and Leave Women To Sew Inc" - this will get you in BEEEEEG Trouble!!! (Sorry Trouble) I know this was hard work Val - BUT I am very glad to get it - I think this and your Penny Black book are the best of your works I have got - thank you!

ANOTHER envelope arrived from Val last week while I was missing in action.

Val - I am not going to try another Cinderella version of your envelope! This one I REALLY didn't get - I dont now if thats got to do with Monday morning lack of interpretive skills day? The back reads - A cat may look at a Queen. Chocolate, Marshmallow and JellyBean look at me every day! They know what side their tuna is smeared. Against all instructions to the contrary I opened the envelope - I HAD to look inside. I thought perhaps a whiff of knowledge was mingled with air from the South of France - No Luck! Attack the comments - we need to know!! Val The Trial Run. I am having a difficult time keeping track of the mail art sent to me by various artists, so I have decided to update my existing blog for each artist. As I am uncertain of the results, Val has agreed (not verbally or textually) to be the guinea pig (I hope he is currently working on updating that phrase to incorporate mail art terminology). ANYWAY back to Val's postcard! - money money honey must be funny, its a rich man's world. 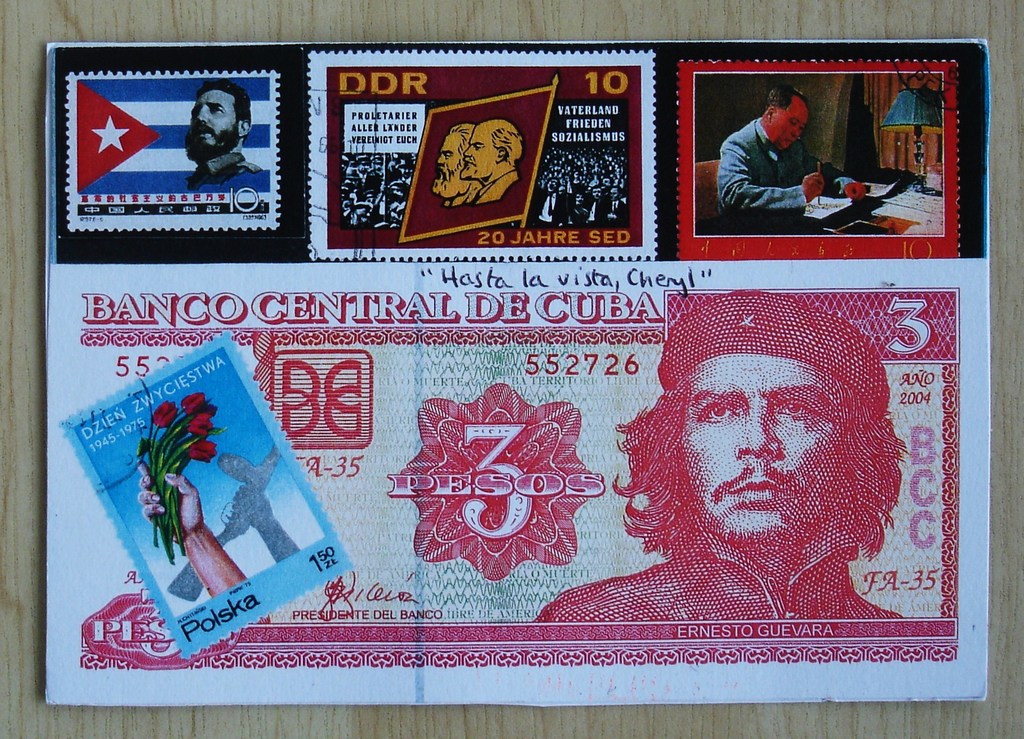 Its a card filled with Bearded Basil pesto's... with greetings from the Queen!
Thanks Val!
I HAD to ask Val about his closed envelope series. He wrote and said (this was stage 8|9 of his VERY enlightening treatise on his work):

8. An envelope that will not be opened seems to me to be more complete
than one that will be opened. If it were to be opened, then there would
be two envelopes --one unopened, the other opened -- necessitating two
approaches to a single theme. (But really a triple theme, because then
the contents would be relevant). I conceptualise my Envelopes in two
not three ways --what goes on the front, what goes on the back, but not
what goes inside.

"9. Then there is an element of 'mystery'. Is there anything in it?
Should I open it? Dare I open it? What if I do open it, destroy its
integrity and then find that there's nothing inside? (I never put
anything inside them, and always issue an Art Health and Safety Warning
'Don't open this!', so people will resist the temptation to open them.
I suppose I could put something inside, and tease recipients.)"
We recipients ALL know that feeling.
Mail Received 22nd October 2010.

HOT HOT HOT OFF the press!! Val added another point two minutes ago:

"Goede morgen Mevrouw! On the 'philosphical' aspect of the closed envelope (points 8 and 9 of our dialogue to date), there is another
thing I'd like to add concerning the 'mystery' element of point 9:

10) Do I really want to know what's in the envelope? I might be
disappointed -- it might be the artistic equivalent of the dreaded bank
statement or bill; the fear of opening a 'Dear John' letter from one who
you thought you loved and who you thought loved you; even the bad news
that used to come in a telegram (and only bad news seemed to ever come
in a telegram). Given that there are some things that it is better not
to know, it follows that there are some envelopes that it is better not
to open."

ANOTHER UPDATE FOR ENVELOPE RECEIVERS as at 17.53 South African time:

11) Although an Envelope is not to be opened now, it can be set up so
that it can be opened later. The first example of this is what I call
the 'Multi-level Envelope'. I recently sent birthday greetings to an
Austrian friend in an Envelope. I told her to open the Envelope on a
specified day. Inside it was another Envelope to be opened on another
day. And inside that a third Envelope, and a third day of opening. And
inside that there was a fourth, very small Envelope which she had to
open on her birthday. And inside that last one there were birthday
greetings. It can also be described as a 'Special Occasion Envelope'

12) The second example of an Envelope that is not to be opened now is
the 'Envelope-as-A-Time Capsule'. I 've submitted an Envelope to an
Australian Mail Art Exhibition called 'Ten Years of Boxes and
Envelopes'. The Envelope is sealed (with a real wax seal) and is not to
be opened for ten years. Inside it is a list of items that are special
to me. (Last year I put together a book called "AD 2059: My Life in a
Cardboard Box" in which I got about 15 of my friends -- and Bianca --
to list and describe up to 50 items that they would put in a 1 meter
cube cardboard box that would not be opened for 50 years. They had to
say why each one of the items was special for them. The box/time
capsule idea goes right back to the Pharaohs and the pyramids, and
includes space Time Capsules and Andy Warhol's Archives and Cardboard
Boxes. Sadly, one of my best friends and contributors to this book died
earlier this year. Before he passed away, he made up a real cardboard
box that he left to his children. he thanked me for giving him the idea
to de-clutter and prioritise his possessions. I was moved by this,
because what started off as one of my somewhat bizarre literary ideas
turned into something that became very useful to my late friend and his
family.

13) Then there is the case where YOU might be asked to open the
Envelope addressed to you, but to pass it on to someone else -- perhaps
after adding something to, but not in it. This is the
'Multi-Recipient(and perhaps Multi Stage) Envelope'.

14) A variant of this theme is the 'Envelope that can only be opened
at a certain location ' -- because the contents of the Envelope are in
some way related to the specified location. 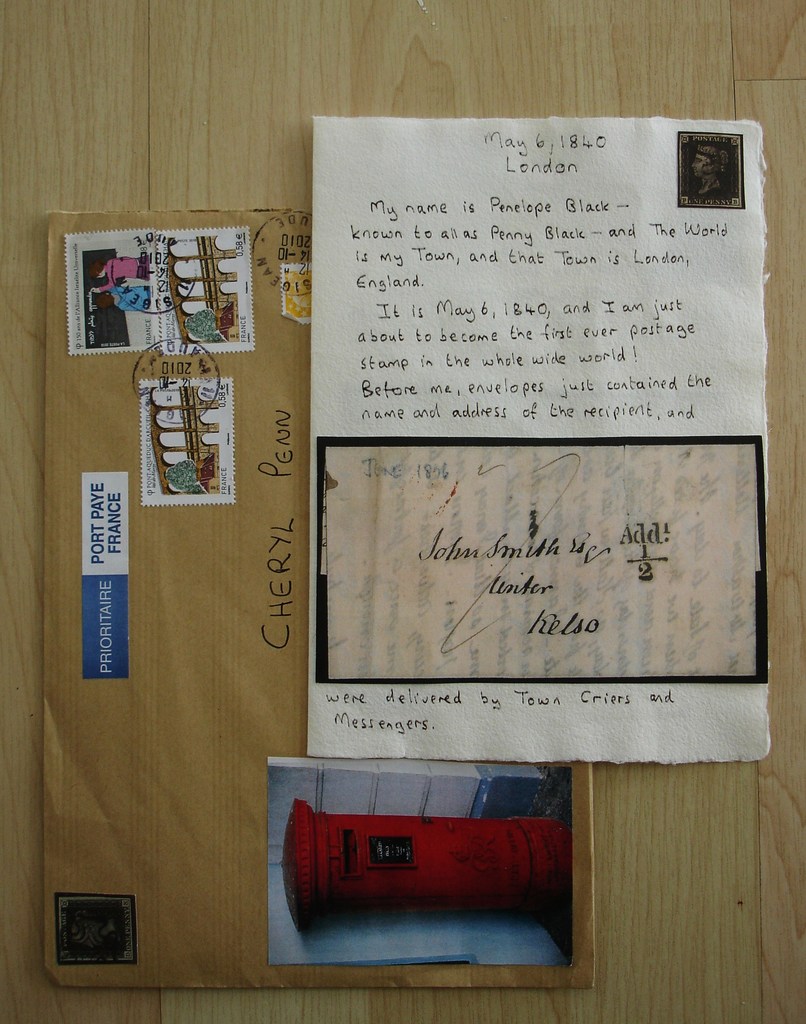 Its the story of the Penny Black Stamp - I'm wondering if he has one??? Or two? Take the time to read what he is saying - its very interesting. Do you know the story of some potato stamp in Jamaica or somewhere that is VERY valuable Val? 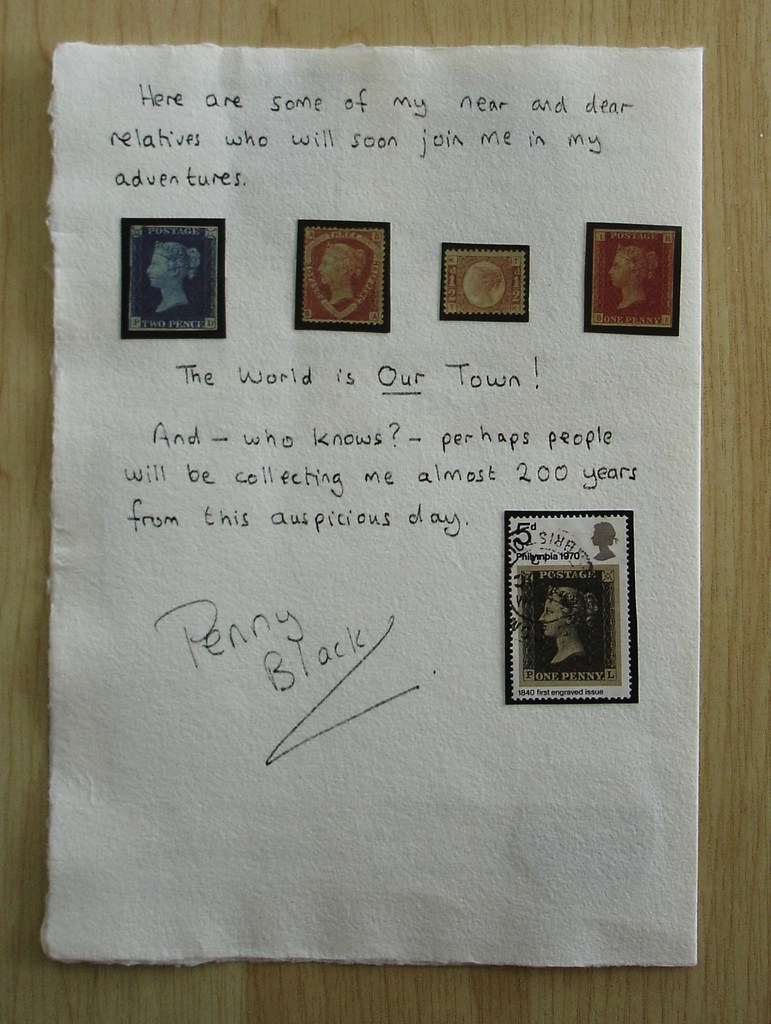 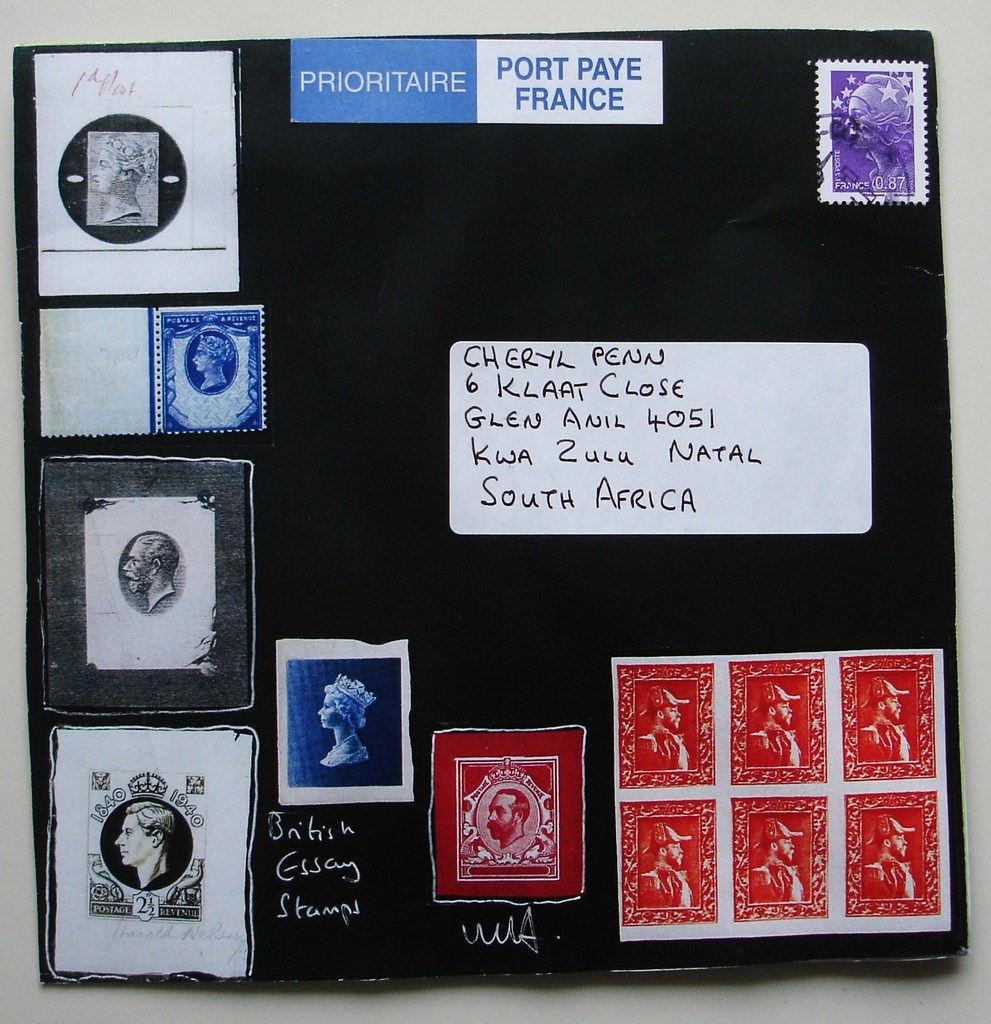 I received number 10 of his limited edition British Essay Stamps. Thanks Val!! I could only but send him some bird stamps - because he lives with three 'chicks'.

Comment by Valentine Mark Herman on January 20, 2011 at 1:05pm
Singularly yours, and thanks. Herman (as in Herman's Hermits)

Comment by Marie Wintzer on January 19, 2011 at 11:49pm
Very precious, great present! Love the face on the envelope too!

Dear Cheryl, I am very pleased that you liked the Penny Red so much.

BRAVO! Cheryl...."good tings come to those who wait".OMG! That is a REAL Penny Red! Take good care...'tis  old, well, not as old as this: 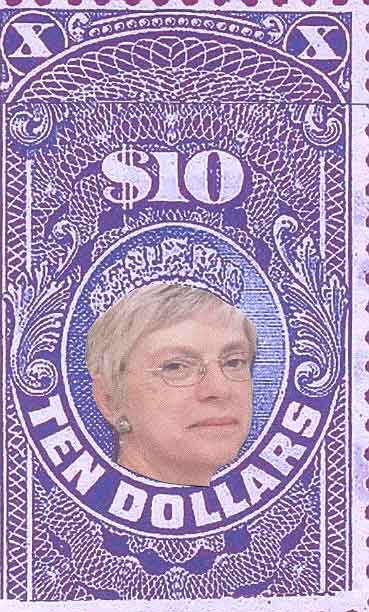 Comment by Valentine Mark Herman on December 9, 2010 at 7:29pm
Methinks you have this the wrong way round, lass: Elizabeth's face is next to mine. As usual. Regards!

Comment by Jen Staggs on December 9, 2010 at 3:47pm
Great work, Val- I loved finding your face next to Elizabeth's. Ya gonna hafta wait for it! (I am wondering if in the summertime in south Africa the mail might be faster????)