This arrived in my mailbox this past weekend. It was tied with baker's twine and sealed with coppery sealing wax. Separate panels are hinged along one edge to flip open as pages of a book. Completely amazing and so exciting to receive from someone unknown to me until that moment. After a little investigation, I discovered she is part of the PAINTING+DRAWING=MAIL ART group (which I have now joined). Part of their mission is to find and connect mail artists who use painting and drawing in…

Ok, What is Mailart?

It comes in the mail.

Sometimes  my blogs are a car wreck.

But the tree will keep them from killing you.

One of the things I like best about mailart is that it isn't just one thing, and the only one who sets the rules is the USPS and ourselves. There's always something new to fiddle with. Or, I can forget about it for a few days and fit in a nap somewhere. Tonight I started to paint some envelopes that I'm recycling for a 'bad poetry' mail-out. After about the third mess, I stopped and just thought about it for a minute. I realized I really didn't want to do it. I wanted to create, but I was…

Do You Know What Day This Is?

Google has a horse-n-rider game up today to celebrate the 155th anniversary of the Pony Express, a unique time and method for mail distribution in the US. Pony Express riders were generally small, light, young, and very brave as they each rode their 50 mile assigned route, changing horses every 10 miles of way.

The social responsibility of the artist
is to survive and to nibble away
at society's thick hide with love
and sharp teeth.
-- Harley

I few minutes ago I sent a message to Giovanni Bianchini. It was scoldy and well-worded, and maybe even right, but it was all wrong. ALL WRONG.
Who knows what difficulties and injustices…

I'm sending this postcard (about 6.25 inches X 8.25 inches) out to someone I think is really funny. But I got to wondering who is funniest to everyone else here on IUOMA. Do you have a thought on that? I'd love to hear suggestions and tally the results. Just put in a comment and the count will stay open until there is a post from the one who gets the card. Sound fun? I'm really curious about who is going to be named most…

While clipping some magazines last week, I came across a picture of Erni Bar. At least, to me it looked like Erni. What do you think? Am I alone in this? Magazine clipping on the left, sort of authorized photo of Erni on the right.

This beautiful photograph by Dan Mouer arrived last week here in Minnesota. With snow all round and the chill in the air, (cool indoors, too!) "Pineapple" is like a beautiful spring day. So fresh! 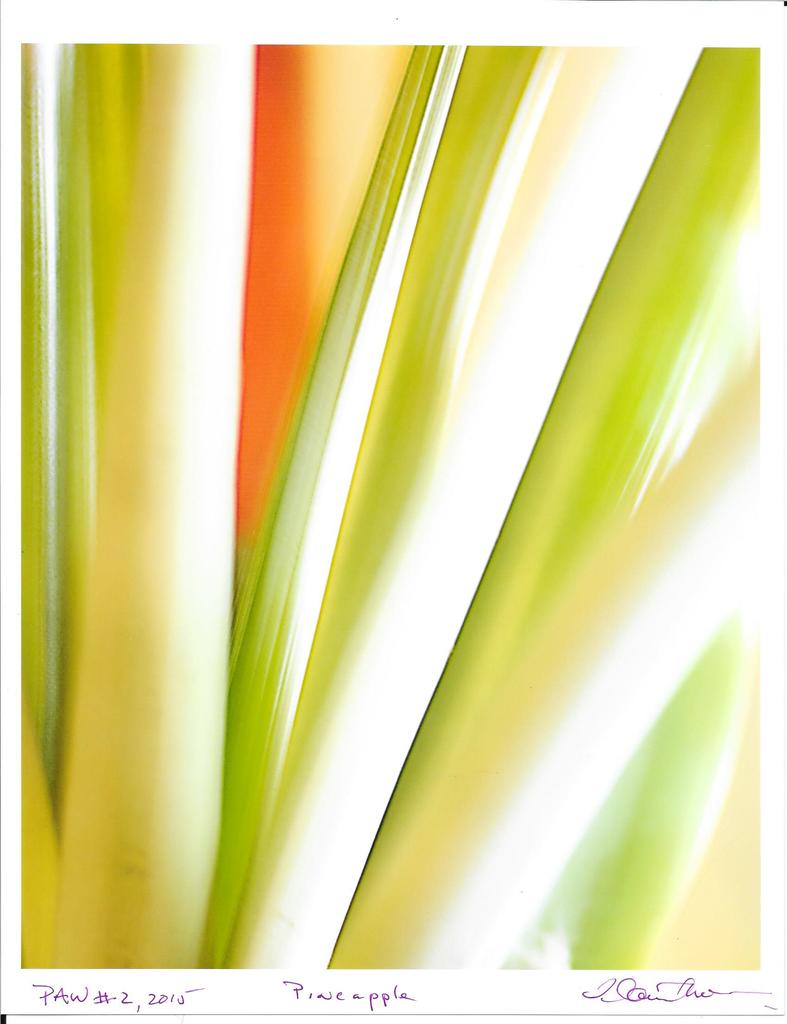 Recuperating from surgery that keeps him off his feet (until he gets a walking cast), Dan has to limit his photography to whatever he can shoot from a limited area -- very limited.…

There has been some wonderful mail-art coming to my mailbox during the past week-and-a-half. Ingenious, even. And while that has been happening, I am having trouble with posting photos again. Erni has given me some good information about one aspect of it, but this particular thing is giving me fits. Not solved yet, but hope to have it worked out today. You will LOVE the fun things artists have been sending. And thank you to all those who are patiently waiting to see if I will come up to…

Oh oh oh! I am behind in getting all of my lovely incoming mail-art posted for others to see.  I feel pretty bugged about that until I can take care of it.  One of my kids gets corralled into doing the scanning ("Didn't I already scan this one?! Twice?!") and it all goes through in one fell swoop.

On one of the YouTube videos about mail-art, someone said something about mail-art requiring an element of faith; just making something I love and tossing it out into the unknown.…

Tonight I had the idea of making up a few kits for making a piece of mail-art, using the kinds of material I already have lying around. This time I'll make 10 (or up to 25 if there is more interest), and anyone who is willing to use this grab bag method to create art can have one of the kits. Ooooo! That sounds like fun to me!

If you had a kit of junk from a stranger, would you willingly post the art you made from it? I think I would, but it would…

Every once in a while -- well, every day-- I find my way to Google Translate to decipher a word, phrase, or conversation. Type in the text, read the Google translation. But oh my! I'm certain that some parts of the translations are not what the original writer intended, since they make no sense. And I'm sometimes wondering how Google Translate is butchering my American English. Advice to self: steer clear of idioms. I have a really good example of this phenomenon:  Google Translates "All I…

So. OK. EVERYTHING I've said about ANYTHING has been appearing on the MAIN PAGE?!!! OK fine. Now I know. At least I think I know.  There's probably all kinds of stuff I could be 'in' on if I, too, had been reading the MAIN PAGE! --Linda

Before I stumbled on IUOMA, I didn't know what a 'boekie' is. Except in the betting world with different spelling. I have made many, many little books, but just call them 'little books,' unless they are journals and then they are 'journals' or 'art journals.' So now I know that I have been making 'boekies'. And journals and art journals.  And mail-art.  --LInda

I Learn Something New Every Day 2, continued

Such as this blog post. WHERE does it appear besides my page? Makes me nuts. Guess I'll go do art.  --Linda

I Learn Something New Every Day 2

Is it just me, or does anyone else wander around lost sometimes on the IUOMA site? I keep thinking the stuff I put in will all appear in the expected place, but it's a bit of a tangle. Lots of places to enter stuff that may appear somewhere else. I think. Also, I can't seem to choose what shows up in the slide show on my page. I used to have more patience with this kind  of thing, but I've gotten to expect the mechanical and electronic world to do ONLY what I deliberately direct it to do.…

I Learn Something New Every Day

Today I learned what a 'punnikin' is. I've seen lots of yarn bombing and guerrilla knitting, but did not know that the little dangly things are punnikins. Now I know. Or do I?  Do I have this right?  --LInda